The jeans, which may have been made by Levi Strauss, were auctioned off as part of a collection featuring items from the sunken “Ship of Gold,” the S.S. Central America. 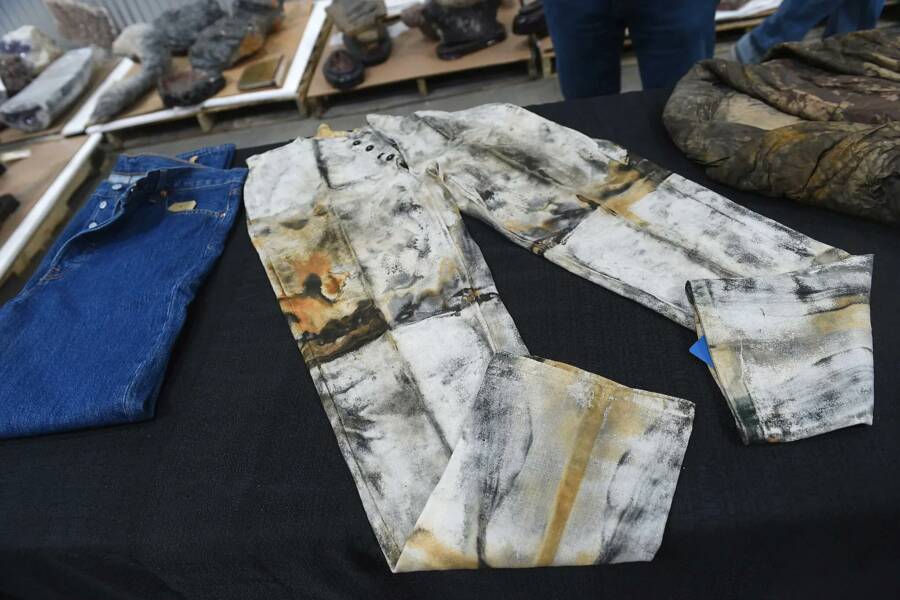 TwitterThe pants have similarities to early designs made by Levi Strauss, but any connection is only speculative.

How much would you pay for a pair of jeans? The answer may vary depending on your budget and sensibilities, but it’s likely that $114,000 far exceeds whatever number comes to mind. Yet that’s exactly what a pair of jeans recently sold for at auction — and it’s possible they might not be that different from any other pair of Levi’s in your dresser.

Per a press release from Holabird Western Americana Collections, the jeans were part of a collection featuring nearly 300 19th-century artifacts recovered from the bottom of the Atlantic Ocean, with many of the items coming from the “Ship of Gold,” the SS Central America, which sank during a hurricane in 1857 en route from Panama to New York.

“Some collectors have been waiting for these extraordinary items to come on the market since the legendary, submerged ship was located in 1988 and Life magazine proclaimed it America’s greatest treasure ever found,” said Fred Holabird, President of Holabird Western Americana Collections.

The jeans were described in the statement as “Gold Rush-era heavy-duty work pants,” and notably feature a five-button fly design that closely resembles those associated with jeans designed by Levi Strauss, leading Holabird historians to speculate that Strauss himself may have made the jeans during his early years of work.

As The New York Times reports, the jeans were found in the trunk of a Mexican-American War veteran named John Dement, who served as a buyer for his family’s mercantile shop. Dement traveled often, and was in fact a survivor of the Central America’s sinking. 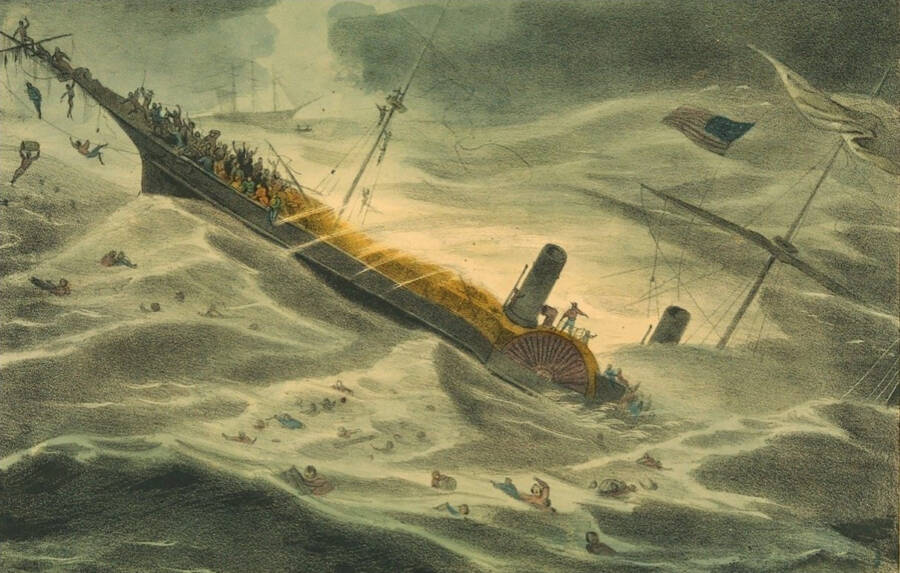 His trunk was recovered in 1991 and contained a variety of objects including socks, night shirts, and paperback books, many of which survived due to a lack of oxygen in the trunk, preventing any bacterial degradation or biological consumption from occurring.

The thick work pants are made of an unknown material and covered in brown and black stains, but given Strauss’ prominence as a seller of dry goods during the Gold Rush and the five-button fly, it’s possible that he either had the pants made or made them himself.

In fact, 16 years after the Central America sank into the ocean, Strauss and his associate Jacob Davis patented the first blue jean ubiquitous with the style we are familiar with today.

However, Tracey Panek, director of the Levi Strauss & Co. Archives, told the Times that linking the work pants to Levi Strauss was purely speculation.

“From the white color, lack of suspender buttons, five fly buttons instead of four, and the unusual fly design with extra side buttonholes, to the non-denim fabric that is a much lighter weight than cloth used by LS & Co. for its earliest riveted clothing, the Dement trunk pants are not typical of the miner’s work pants in our archives,” she said.

And although the work pants have now sold for over $100,000, they were at the time among the least valuable items aboard the ship.

According to SFGATE, the Central America was boarded by a variety of wealthy passengers, including Ansel and Adeline Easton, a honeymooning couple from San Francisco whose families had made their fortune banking in California.

The couple had planned to honeymoon on the East Coast, but these were, of course, the days before the Panama Canal. They sailed from San Francisco to Panama, crossed overland to the Caribbean, and boarded the Central America.

“The S.S. Central America was carrying tons of Gold Rush treasure from San Francisco and the northern California area when she sank 7,200 feet deep in the Atlantic off the North Carolina coast in a hurricane while on a voyage from Panama to New York City in September 1857,” said Holabird.

Over the course of several days, the hurricane caused increasingly severe damage to the steamship, causing water to leak in and knocking out power to the vessel’s steam engines.

Many of the women and children onboard managed to escape on lifeboats, including Adeline Easton, and rowed to safety. Most of the men, however, were left behind as the ship sank into the ocean — including Ansel Easton.

In total, 425 of the ship’s 578 passengers and crew members died as a result of the hurricane. Of the 153 who survived, only 49 were men. Fortunately, two of those men happened to be Ansel Easton and John Dement.

For over a century, the Central America lay untouched at the bottom of the Atlantic Ocean, until the 1980s when treasure hunter Thomas Gregory Thompson led a private excavation group to the sunken vessel to retrieve many of its valuables — of which he then claimed ownership. 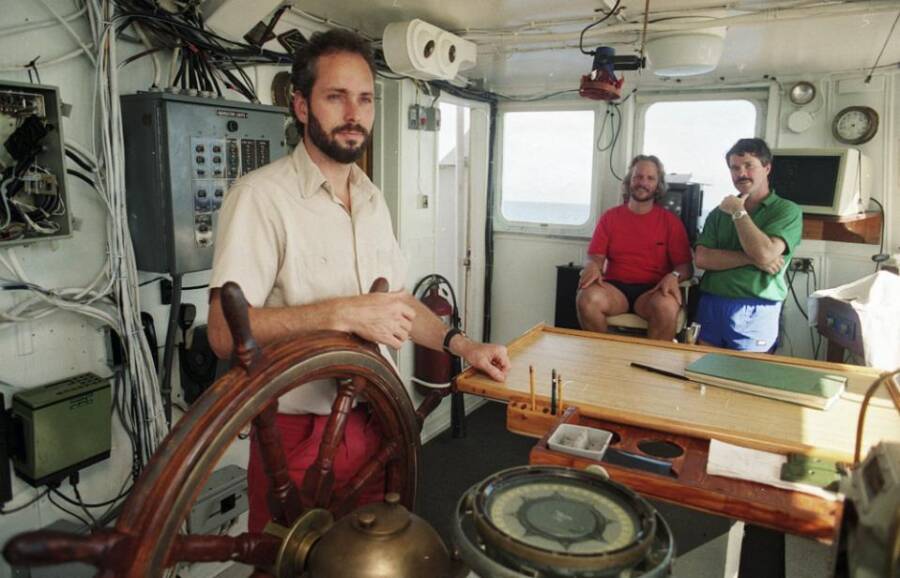 TwitterTommy Thompson, the treasure hunter and fugitive who refused to reveal the location of gold he recovered from the sunken Central America steamship.

Following this, Thompson went into hiding to avoid the numerous lawsuits levied against him as insurance companies also attempted to claim ownership of the sunken relics.

In 2012, Thompson was ordered to appear in court and disclose the location of recovered gold from the Central America. Instead, he fled, became a fugitive, and was arrested at a hotel in Florida in 2015.

He has been in federal prison ever since.

Meanwhile, many of the treasures he helped reclaim are now owned by the California Gold Marketing Group of Brea, California, which has since worked with Holabird to auction them off.

“These incredible artifacts give us a glimpse of daily life for the passengers and crew in the 1850s,” said Dwight Manley, the group’s Managing Partner. “They are a time capsule from the California Gold Rush.”

After reading about these recovered treasures and the tragic journey of the SS Central America, learn about the seventh-century shipwreck found off the coast of Israel containing Christian and Islamic symbols. Or, read about the divers who recovered 900 bottles of booze from a World War I shipwreck.