The True Story Behind ‘Raising The Flag On Iwo Jima’

Joe Rosenthal's "Raising the Flag on Iwo Jima" captured one of World War II's most iconic moments, but the real story behind the photo would remain little-known for decades. 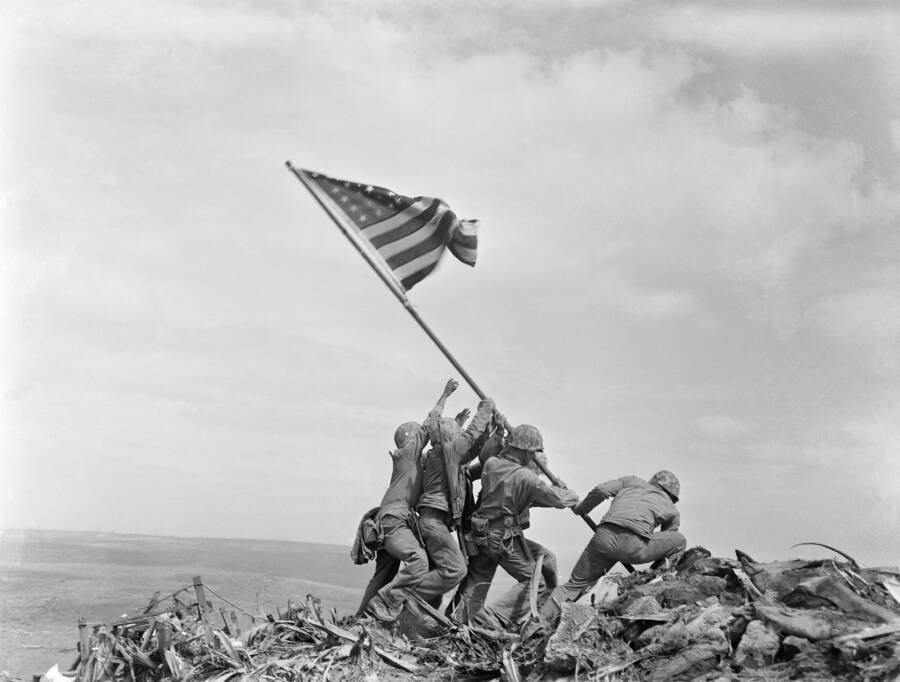 When photographer Joe Rosenthal snapped a picture of U.S. Marines raising the flag on Iwo Jima, he didn’t yet know that the photo would become one of the most iconic images in American history. He’d just heard that a patrol was headed to the island’s highest point with a flag and decided to follow them.

Rosenthal climbed Mount Suribachi, dodging still-active Japanese mines and walking past the dead. As the trail grew steep, Rosenthal later admitted, “I began to wonder and hope that this was worth the effort.”

And when the flag went up, he didn’t even have time to look through his camera’s viewfinder before getting the shot off. Within months, Joe Rosenthal’s “Raising the Flag on Iwo Jima” won a Pulitzer Prize and was featured on a U.S. stamp.

But for years afterward, rumors swirled that Rosenthal had staged the flag-raising to get the famous picture or that it otherwise wasn’t as candid as it appeared. So, what is the real story behind one of the most famous moments of World War II?

Why The Marines Fought The Battle Of Iwo Jima

Iwo Jima is a tiny volcanic island in the Pacific that sits halfway between Guam and mainland Japan. During World War II, the island housed a strategic Japanese airbase. It was also officially part of Japan, rather than an overseas territory, and a crucial stepping stone for an eventual invasion of the mainland. 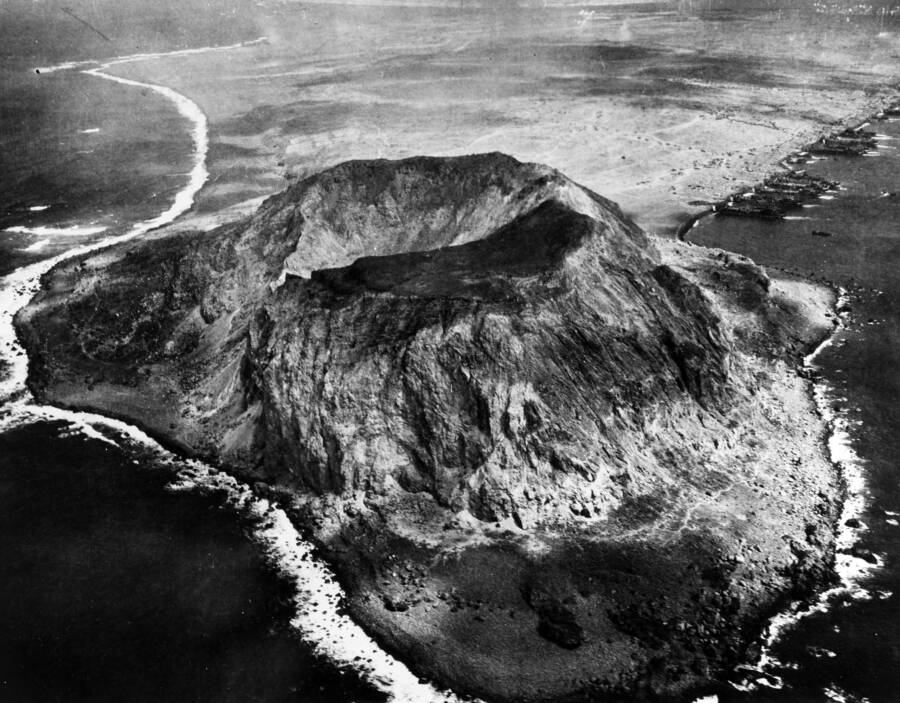 National Museum of the U.S. NavyMount Suribachi, the volcanic peak on Iwo Jima.

So, even though the eight-square-mile island contained bunkers, tunnels, and hidden artillery, U.S. Marines landed on Iwo Jima on Feb. 19, 1945, to take it.

After four days of brutal fighting, the Marines finally captured the southern portion of Iwo Jima. With Japanese gunfire still echoing in the air, a team of Marines headed up Mount Suribachi, the 554-foot peak, to raise the U.S. flag.

With gunfire raining down on them, a patrol of 40 Marines began to scale the mountain. They brought a flag from the USS Missoula. Their orders: “If you get to the top, put it up.”

The U.S. fleet surrounding Iwo Jima, made up of hundreds of ships, went wild at the sight. “Everyone blew their sirens and horns,” remembered veteran Tom Price. “Everybody cheered and it was really something because the flag from the Missoula was the very first to be raised on Japanese territory.”

But that flag was not the one captured in the iconic photo of raising the flag on Iwo Jima.

Raising The Flag On Iwo Jima

When the first American flag went up on Mount Suribachi, the Japanese opened fire. The flag created a clear target for the soldiers who refused to cede Iwo Jima.

As gunfire rained down on Mount Suribachi, Louis Lowery, a Marine photographer, dove for cover and broke his camera. And orders soon reached the Marines on the mountain — the flag was too small to see from everywhere on the island. 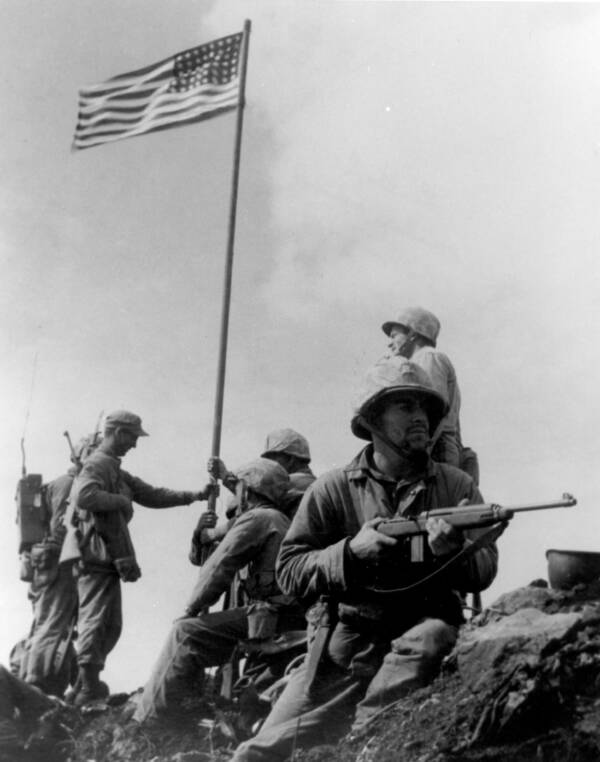 As Marines hauled a larger flag up the mountain, Lowery raced to get a new camera. On his way down the mountain, he ran into Joe Rosenthal. The flag was already up on Iwo Jima, Lowery told Rosenthal. But Rosenthal kept hiking, hoping the trip would prove worth the effort. He reached the peak around the same time as the larger flag.

When Joe Rosenthal got to the top of the mountain, he spotted men working with a makeshift flagpole made from a long pipe.

“I came up and stood by a few minutes until they were ready to swing the flagpole into position,” he later remembered. Rosenthal positioned himself as far from the Marines as possible to catch the full scope of the scene.

“I rolled up a couple of large stones and a Japanese sandbag to raise my short height,” Rosenthal recalled. Then he snapped the famous picture. 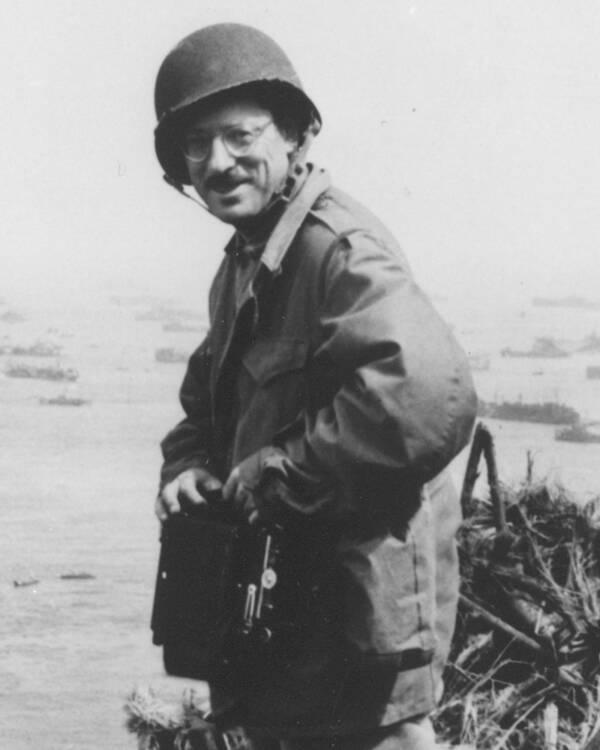 Rosenthal hauled a bulky Graflex 4×5 camera up the mountain. And on the top, he managed to capture just a single frame of the flag-raising.

“Out of the corner of my eye, I had seen the men start the flag up,” Rosenthal said. “I swung my camera and shot the scene. That is how the picture was taken, and when you take a picture like that, you don’t come away saying you got a great shot. You don’t know.”

Not sure he caught the moment, Rosenthal asked a group of Marines to crowd around the flag for a posed shot that later became known as the “Gung-Ho” photo.

Then Rosenthal climbed back down the mountain to send his film off to Guam for developing. Within 18 hours, the Associated Press had distributed the “Raising the Flag on Iwo Jima” picture to every American newspaper, where it landed on front pages around the country.

The Controversy Over Joe Rosenthal’s Photo 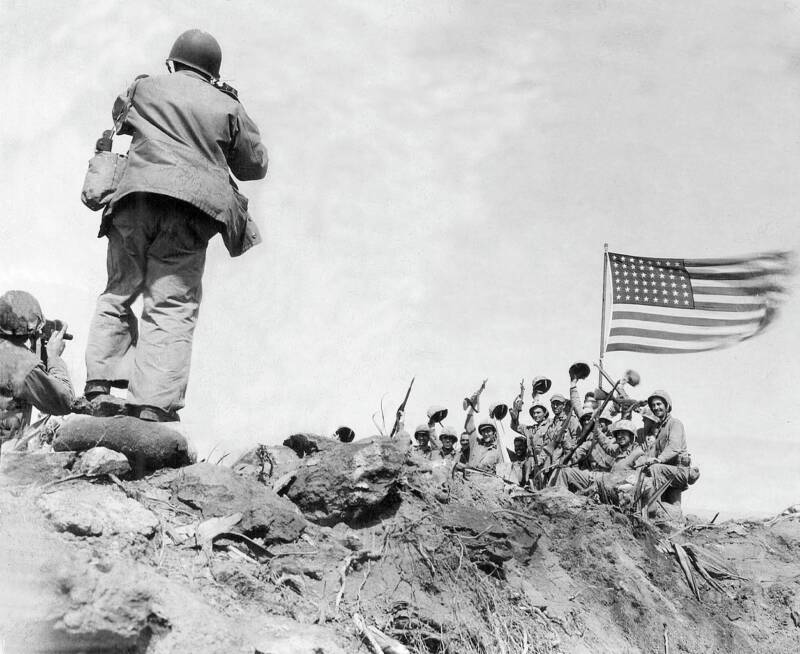 Bob Campbell/Wikimedia CommonsJoe Rosenthal photographs Marines posing with the flag on Iwo Jima. The image Rosenthal took would later be known as the “Gung-Ho” picture.

The photograph of raising the flag on Iwo Jima was perfect — so perfect that some claimed it was staged.

“Joe spent the rest of his life defending what was alleged as a ‘phony picture,'” said photo editor Hal Buell. The military held an inquiry into the picture. So did LIFE magazine. Every inquiry determined the photo was not staged.

Yet the rumors persisted.

Even Lowery, who photographed the first flag raising, thought Rosenthal’s picture was too good to be true.

Bill Genaust, a war photographer, was at Joe Rosenthal’s side when he shot the famous photograph. Genaust, armed with a motion picture camera, captured the entire scene. That film proved that the iconic image was not staged. But Genaust could not defend Rosenthal — he died in a cave on Iwo Jima.

The battle of Iwo Jima dragged on for a month after the flag-raising. The fighting claimed 26,000 American casualties, and three of the Marines in the famous photograph lost their lives on the island.

Yet the photograph of raising the flag on Iwo Jima lives on as a testament to the bravery of the Marines who risked their lives for their country — and the photographers who put their own lives on the line to capture the iconic moment.

After reading the story behind “Raising the Flag on Iwo Jima,” look at these stunning World War II photographs. Then, learn about the war’s deadly Pacific theater.