4 Real Frankenstein Experiments And The Mad Scientists Behind Them

For decades before and after Mary Shelly's book, several prominent scientists were putting serious brainpower into real Frankenstein experiments by using the then-magical power of electricity. 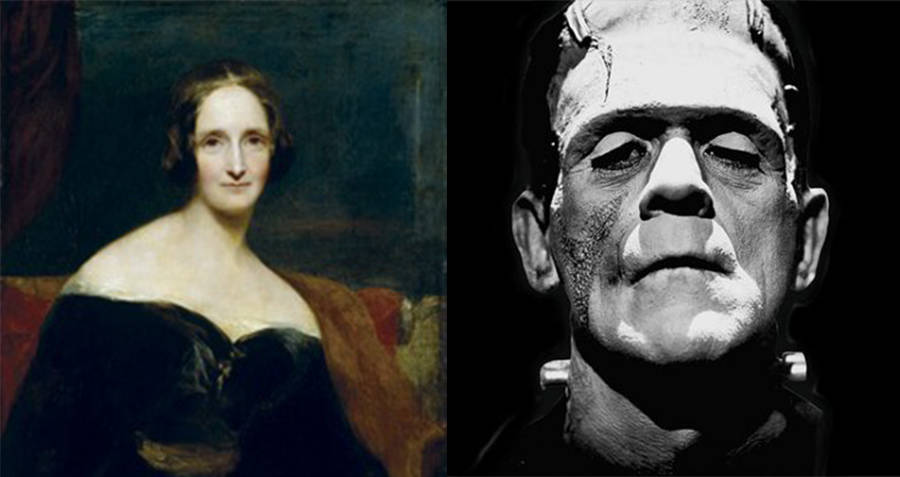 In 1818, a 20-year-old woman named Mary Shelley anonymously published her first novel. Titled Frankenstein or The Modern Prometheus, the book told the story of the proverbial mad scientist who reanimated a corpse and created a monster.

Though Shelley very carefully omitted any exposition in her book of how, exactly, Dr. Frankenstein brought his cadaver back to life, modern interpretations of the novel almost always have the lightning bolt zapping the creature to life. This now-cliché tableau may not be exactly what Shelley had in mind when she wrote the book, but it’s actually not far off from the manner actual scientists of the time were doing in their labs.

For decades before and after the book’s publication, several prominent scientists were putting serious brainpower into the job of reanimating corpses in real Frankenstein experiments by using the then-magical power of electricity.

Wikimedia CommonsLuigi Galvani and a diagram for his frog experiment.

Bringing dead things to life with the power of electricity was an old idea even when Shelley started writing in 1818. Decades before, in 1780, and Italian super-scientist named Luigi Galvani had noticed an effect that would set him on the path to the sort of grisly experiments that could have inspired Frankenstein.

In that year, Galvani was a lecturer at the University of Bologna. Scientists of the late 18th century weren’t necessarily specialists, and Galvani was interested in everything. All at once, he was a chemist, physicist, anatomist, physician, and philosopher; and he seems to have excelled at everything.

By 1780, Galvani had already been the chair of the Obstetrics department for over a dozen years and had done extensive work on animal hearing and sight. When that line of research (and, presumably, the obstetrics) got stale, Galvani turned his attention to frogs’ legs. According to the legend that later developed around his work, Galvani was slowly skinning the severed lower half of a frog when his assistant’s scalpel touched a bronze hook in the frog’s flesh. All at once, the leg twitched as if it was trying to hop away. It Gave Galvani ideas.

Galvani published his results in 1780, along with his theory about what was going on. In his model, dead muscles contained some vital fluid he called “animal electricity.” This, he argued, was related to, but fundamentally distinct from, the kind of electricity in lightning or the shock you could get after walking across a carpet.

He thought the electrical contact animated whatever residual animal-electric fluid remained in the legs. This sparked (pun!) a respectful argument with Alessandro Volta, who first confirmed Galvani’s experimental results, but then disagreed with him that there was anything special about animals and their electricity.

A shock was a shock, he argued, and then he invented a reasonably efficient electric battery to prove it. By 1782, Volta was shocking all sorts of dead things himself to prove any old electricity could do the trick. 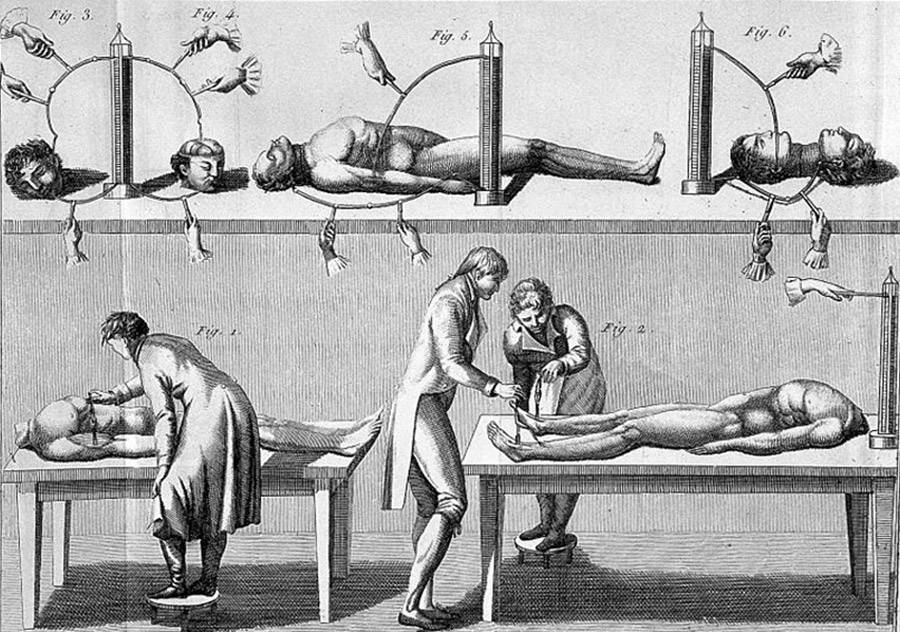 By the time Volta was building his first Voltaic piles, Galvani was too old to start a flame war over his theory. Instead, defending his ideas fell to his nephew, Giovanni Aldini, and that’s where things get weird.

On Jan. 18, 1803, a man named George Forster was hanged by the neck in London. The court had found him guilty of drowning his wife and child in a canal. Forster dropped and died quickly, and his body was delivered to the workshop of Giovanni Aldini, who had moved to the Newgate neighborhood specifically to be close to the hangings that took place there. Quickly, Aldini summoned an audience of medical students and curious onlookers and began to work on the corpse.

First, he moved the limbs and may have struck the face to demonstrate that Forster was truly dead. Then, he soaped the dead man’s ears with salt water and stuck sponges in them to conduct electricity. Finally, he applied electrodes to each ear and passed a current through the dead man’s head.

In the words of a horrified reporter who witnessed the demonstration:

“On the first application of the process to the face, the jaws of the deceased criminal began to quiver, and the adjoining muscles were horribly contorted, and one eye was actually opened. In the subsequent part of the process the right hand was raised and clenched, and the legs and thighs were set in motion.”

To anybody watching, it must have seemed that Aldini was raising the murderer from the dead. This was, predictably, a disturbing thought for many people. Questions were even asked in government circles about what the law would require if Forster actually had come back to life, and the consensus view was that he’d have to hang a second time.

Aldini’s real Frankenstein experiments had become the toast of London, and his uncle’s ideas about animal electricity were starting to look credible. 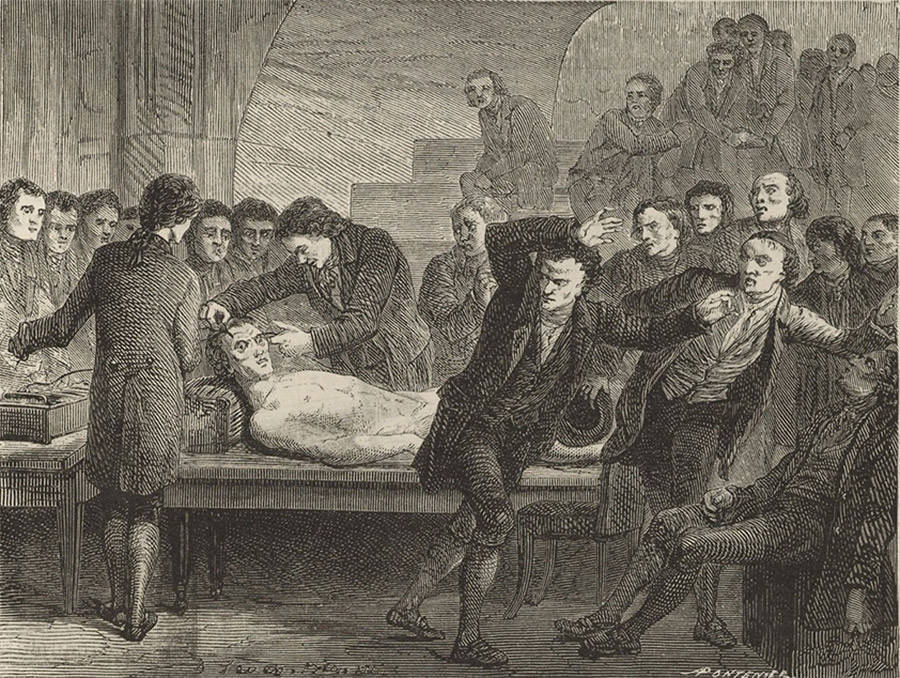 Around the time Aldini was experimenting with his executed criminals in London, a young Scottish scientist and “scriptural geologist” named Andrew Ure was getting his degree in Glasgow. Ure was another one of those generalized geniuses who was interested in everything.

His encyclopedic book about industrial processes, written in the 1830s, is said to have needed 19 expert translators to render it properly into French. Fresh out of university and looking for something to study, Ure found Aldini’s work fascinating and decided to try it out for himself.

By 1818, Ure had his own steady supply of freshly hanged criminals to play around with. There was no shortage of executions in Britain then since around 300 crimes carried the death penalty, and so Ure kept busy.

Unlike medical researchers of today, Ure liked to have a crowd watching his procedures, which were not experiments so much as they were public freak shows that helped Ure build a reputation as a scientific wizard. Like Aldini, he specialized in shocking various parts of the body to make them move. Also as had been the case with Aldini, the scientific validity of this was questionable, as Ure didn’t seem to be answering any specific questions with his work. It apparently looked cool though:

“Every muscle of the body was immediately agitated with convulsive movements resembling a violent shuddering from cold. . . On moving the second rod from hip to heel, the knee being previously bent, the leg was thrown out with such violence as nearly to overturn one of the assistants, who in vain tried to prevent its extension. The body was also made to perform the movements of breathing by stimulating the phrenic nerve and the diaphragm.

When the supraorbital nerve was excited ‘every muscle in his countenance was simultaneously thrown into fearful action; rage, horror, despair, anguish, and ghastly smiles, united their hideous expressions in the murderer’s face, surpassing far the wildest representations of Fuseli or a Kean. At this period several of the spectators were forced to leave the apartment from terror or sickness, and one gentleman fainted.”

Ure eventually ran out of steam with his real Frankenstein experiments, and local churches were agitating to shut him down by force if he didn’t stop summoning devils in his lab. In time, he gave up the reanimation efforts, correctly concluding it was a waste of his time, and then turned his attention to more productive pursuits, such as revolutionizing the way volumes are measured and developing a working thermostat.

He also spent the years between 1829 and his death in 1857 arguing passionately that the Earth was 6,000 years old, and that “true science” always agrees with the Bible.

The work of the early Galvanists was largely set aside after the 1820s. Even Ure seems to have abandoned his early work in favor of temperature regulation and Bible prophecy. The Soviet Union, however, evidently didn’t feel the same bourgeois constraints where the subject was mad science.

By the early 1920s, even before the Russian Civil War had ended with a Bolshevik victory, a Russian scientist was back at it. Except this time, he was getting results.

Sergei Bryukhonenko was a scientist living in Russia during the Revolution who invented what he called an “autojektor,” or the heart-lung machine. These exist today, and Bryukhonenko’s design was fundamentally sound, but it’s the way he tested it that’s creepy.

During his early experiments, Bryukhonenko decapitated a dog and immediately connected it to his machine, which drew out blood from the veins and circulated it through a filter for oxygenation. According to his paper, Bryukhonenko kept the dog’s severed head alive and responsive for over an hour and a half, before blood clots built up and killed the dog on the table. These experiments were documented in the 1940 film “Experiments in the Revival of Organisms” and showcase many of Brukhonenko’s experiments.

This wasn’t strictly reanimation, but it was Bryukhonenko’s stated purpose to eventually learn how to totally reanimate fallen Soviet men on behalf of the state.

According to the sometimes-reliable Soviet Congress of Science, Bryukhonenko actually managed it in 1930. Given the hours-dead corpse of a man who had committed suicide, the team plugged his body up to the autojektor and pushed a witches’ brew of odd chemicals into his bloodstream.

The man’s chest cavity was open, and the team allegedly got his heart started again. The story goes that they got as far as developing a steady heart rhythm when the dead man started groaning like a real Frankenstein. At this point, everybody got seriously freaked out and shut down the experiment, letting the man die for good.

All things considered, it was probably for the best.