Sultan Kosen and Jyoti Amge met for the first time and posed for photos despite their almost 6-foot height difference. 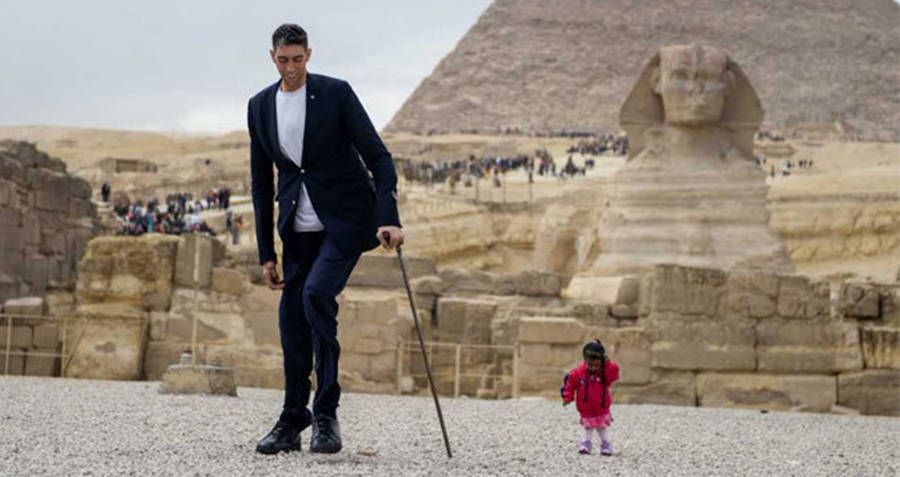 The world’s tallest man and the world’s shortest woman posed for a photo-op on Saturday, against the backdrop of the Great Sphinx of Giza.

The tallest man on earth Sultan Kösen, an 8-foot-3-inch-tall farmer, towered over the diminutive Jyoti Amge, an actress from India, who measures just 2 feet.

The pair were introduced as part of an event put on by the Egyptian Culture Ministry, in an effort to increase and support tourism to Egypt. The duo struck poses for awestruck tourists, clearly nonplussed by the roughly 6-foot height difference between them.

His tiny counterpart, Amge, has held her own Guinness World Record for the smallest living woman since 2011 when she was measured on her 18th birthday. Amge has used her height to her advantage in her work as an actress, most notably being cast in American Horror Story: Freak Show as a member of a traveling freak show where she played a version of herself.

Amge has also been introduced to her male counterpart, though this is the first time she’s met someone as tall as Kosen.

While the unlikely duo are in Egypt, they plan to visit historical areas and tourist sites, to hopefully encourage others to visit the country. The pair will also hold a press conference upon the completion of their journey.