The Overlooked Story Of The SS Eastland Disaster

Relive the horror of the 1915 SS Eastland disaster that killed 844 people and wouldn't have happened at all if not for the Titanic. 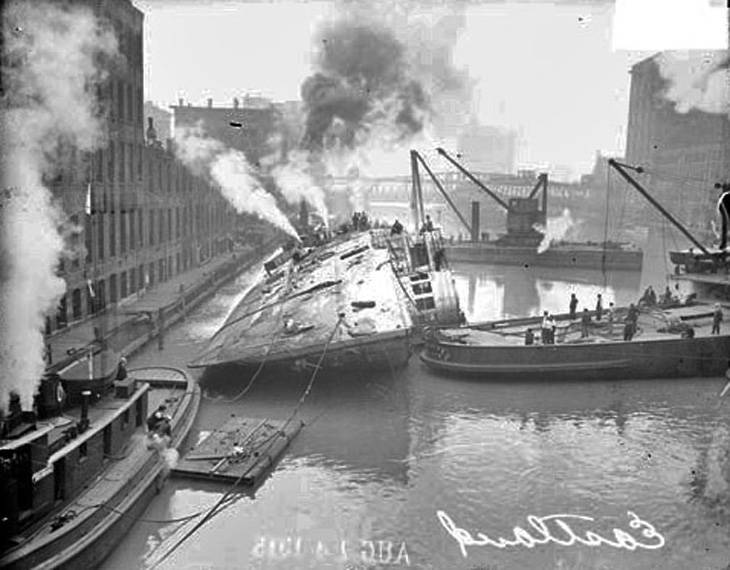 Wikimedia CommonsThe steamer SS Eastland being righted after capsizing in the Chicago River.

Chicago’s SS Eastland disaster of 1915 killed 844 people and likely wouldn’t have happened if not for the sinking of the Titanic three years earlier, yet it’s largely been forgotten today. Perhaps it’s because the SS Eastland capsized in just 20 feet of water while the ship was still docked on the Chicago River. Or was it that, unlike the Titanic, the SS Eastland carried thousands of working poor instead of society’s rich and famous?

Originally constructed for transporting fruit, the SS Eastland was, on the morning of July 24, bound for an all-day picnic at a park 40 miles across Lake Michigan.

The Western Electric Company had chartered the boat to ferry its workers to the company-sponsored event. For many of these working class people, the picnic was their rare chance for a little holiday. The passengers, many of them Czech immigrants, began boarding the boat at 6:30 a.m.

By 7:15, the ship had reached its capacity of 2,572 passengers. Many of them flocked to the upper decks, waving to their friends and family on the riverfront. Then the already top-heavy ship (thanks to poor ballast construction, for one) began to lurch under them, ominously tipping away from the wharf.

The ship then righted itself, but only briefly. By 7:23, the ship was at a 45-degree angle. Water began pouring into the engine room. The crew fled to the upper decks. Passengers that had gone to the lower decks to hear the band play were being crushed by heavy furniture now sliding to the side. 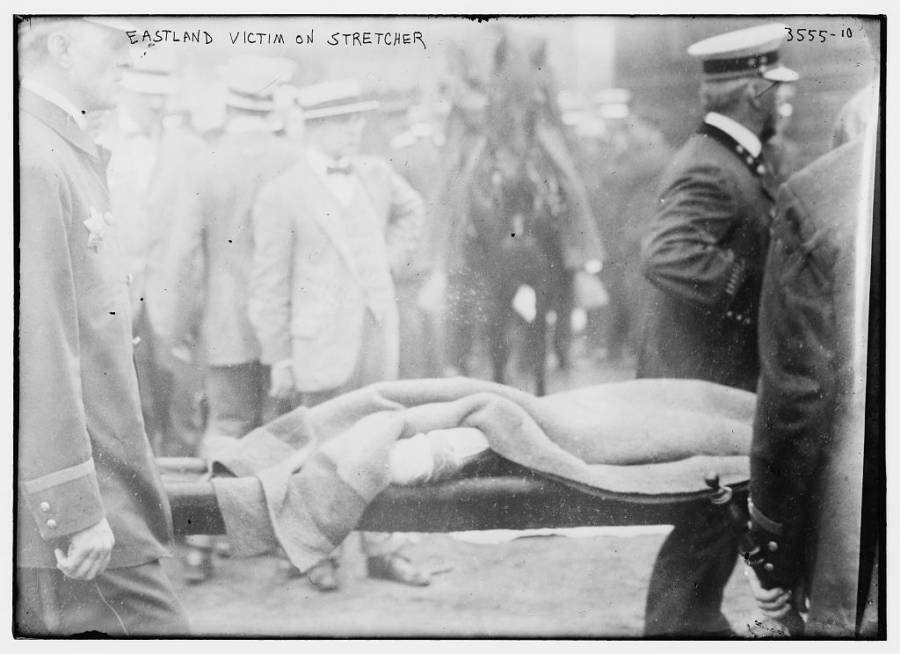 Library of CongressA victim being transported by stretcher.

In under two minutes, the SS Eastland was completely on her side, water everywhere. Trapped passengers on the lower decks tried desperately to escape the confines of their cabins and the murky waters that surrounded them. The women, wearing the intricate and heavy party clothes popular at the time, struggled to simply stay afloat while searching for an underwater exit. Most were unsuccessful.

“When the boat toppled on its side those on the upper deck were hurled off like so many ants being brushed from a table,” wrote Harlan Babcock from the Chicago Herald. “In an instant, the surface of the river was black with struggling, crying, frightened, drowning humanity. Wee infants floated about like corks.”

Stunned people at the riverfront watched in horror as the SS Eastland disaster unfolded before them. Some jumped into the river and attempted to save lives. Others threw crates or boards in for the drowning people to grab ahold of. “God, the screaming was terrible, it’s ringing in my ears yet,” a warehouse worker old a reporter. 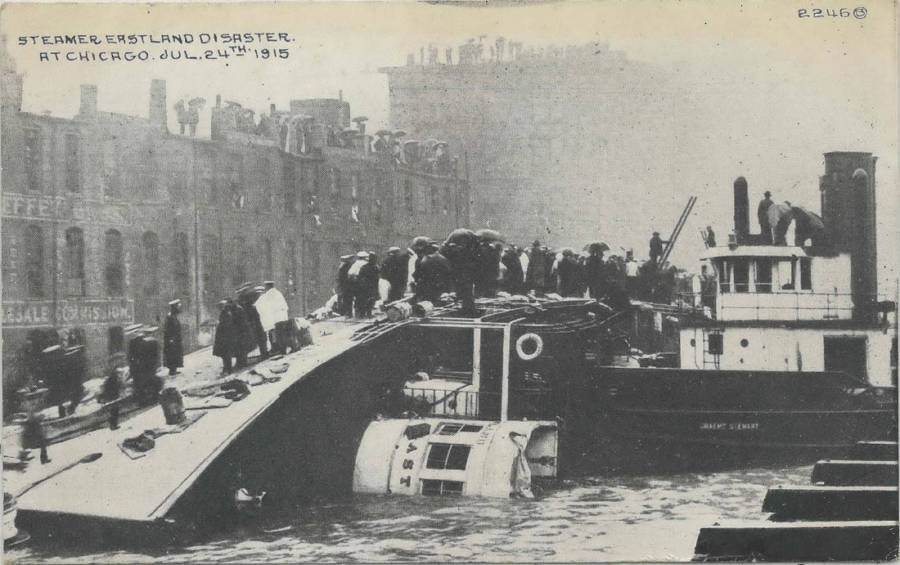 Though the SS Eastland had some design flaws and had experienced close calls in the past, the 1915 disaster was largely caused by the Seamen’s Act. This new federal rule, enacted after the Titanic disaster, mandated that every passenger vessel must be retrofitted with a complete set of lifeboats. For the SS Eastland, this meant the weight of five additional lifeboats, 37 life rafts at 1,100 pounds each, and enough life jackets for 2,570 people.

All this extra weight was mainly carried on the upper deck. However, no extra safety tests were conducted after this addition. Furthermore, the absence of water in the ballast tanks also meant less stability for the ship. It seems as though the SS Eastland was probably doomed from the very start.

In the end, the final death toll of the SS Eastland disaster was 844, roughly one-third of the total people on board the ship. A large number of the victims, about 70 percent, were under the age of 25.

After the bodies started coming in, makeshift morgues like the nearby Second Regiment Armory filled with corpses for families to identify. A shocked Chicago rallied together to provide food and services for the survivors and families. 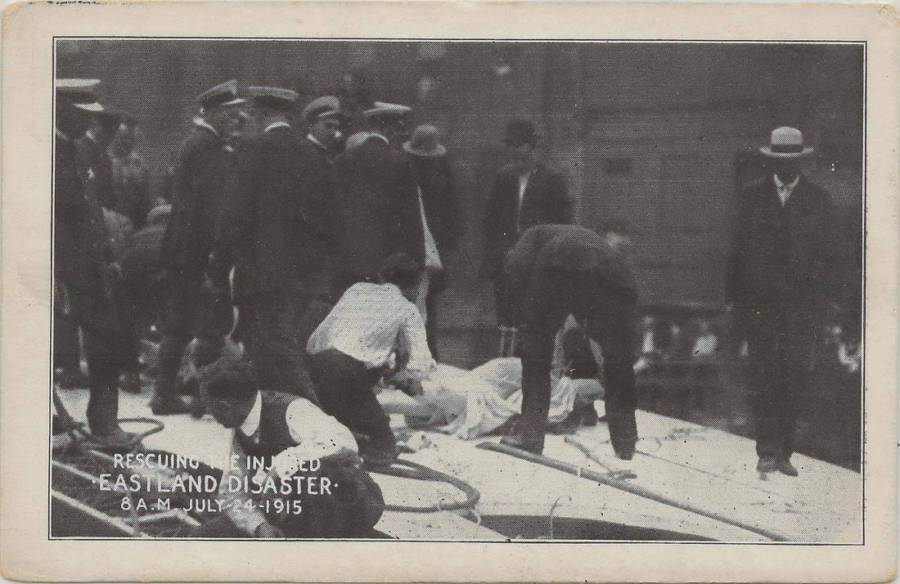 Families and others tried to place blame everywhere: the ship’s manufacturer, the captain, the engineer. But no evidence brought forth was able to overturn the growing theory that this was an unfortunate accident void of malicious intent. Nevertheless, the civil suits for more than 800 wrongful deaths continued for decades. However, most families saw little or no returns on their claims.

Who was responsible for all these wrongful death? There were many variables, and a few poor decisions made by several people. But in the end, the SS Eastland disaster, one of the modern history’s deadliest peacetime shipwrecks, could be blamed on the extra weight it carried in order to be in compliance with a law. A law whose sole purpose was to save lives.

After this look at the SS Eastland disaster, see some of the most haunting Titanic photos ever taken. Then, read up on five sunken ships more fascinating than the Titanic.