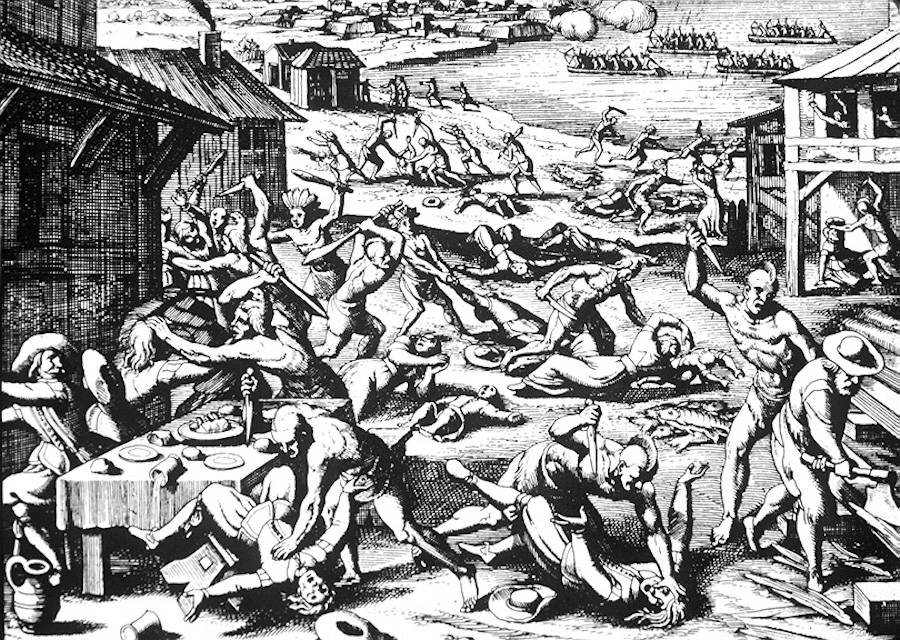 Wikimedia CommonsA depiction of Native Americans attacking colonists during the Indian massacre of 1622 in Virginia.

Today, it’s hard to imagine what it would be like to be one of the first English settlers at Jamestown in Virginia, let alone during the period now called Starving Time. There’s nothing in our lives to compare it to. The settlers were at the edge of what they considered civilization and any help from home would take weeks or months to arrive.

To the east was a massive body of water, and to the west, there was nothing but impenetrable forest. They were an island of the familiar in a sea of the terrifying unknown.

If they were going to live, they needed to learn to adapt. The only other time other Englishmen had seriously attempted to establish a colony in the area was the Roanoke colony, where settlers had vanished without a trace.

It’s no wonder then that the first years in Jamestown were hard. Within days of landing, the first settlers were attacked by the Powhatan tribe. Consequently, the first few weeks were dedicated to building a fort to protect against future attacks from Native Americans and other European powers.

From there, things only seemed to get worse. The colony was perpetually short on food. The malnutrition made the settlers vulnerable to disease, which quickly set in and began killing off the colonists.

If it weren’t for John Smith, one of the early leaders of the colony, it’s unlikely that the colony could have succeeded. Smith managed to make contact with the Powhatan and traded European goods for food. But Smith’s tendency to strong-arm food from the natives also angered the communities he traded with. And his leadership style earned him no shortage of enemies within the fort.

In 1609, a mysterious explosion of gunpowder seriously injured Smith who was forced to return to England. By the time he left, the colony was on the brink of collapse. 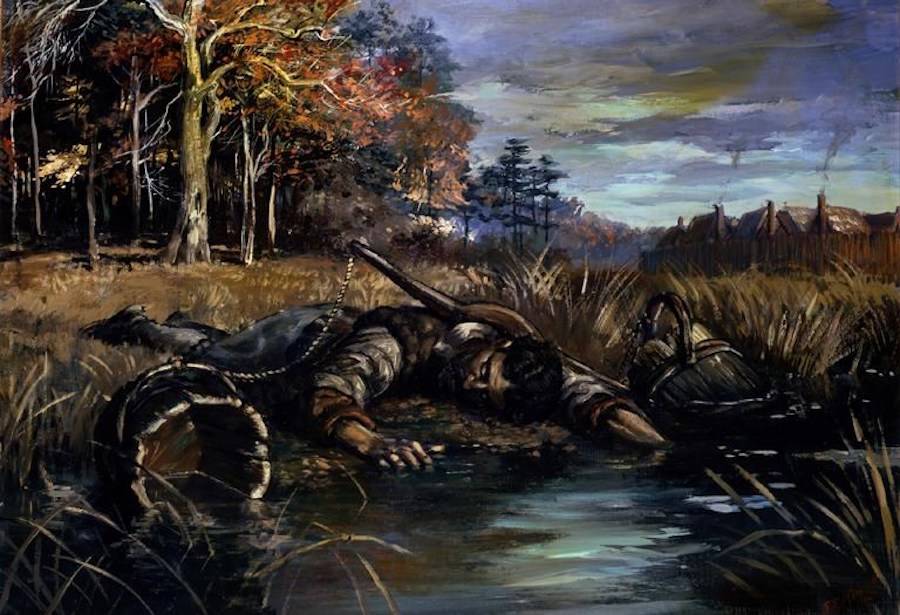 Sydney King/NPSA depiction of a Jamestown settler killed outside the fort.

Shortly after he set sail, the Powhatans put the fort under siege, killing any person or animal that ventured outside.

George Percy, one of the leaders of the colony after Smith’s departure wrote, “Indians killed as fast [outside the fort] as Famine and Pestilence did within.”

This was the beginning of Starving Time. That year the Virginia Company, which financed the colony, dispatched a fleet of ships with new settlers and supplies. But a series of storms on the way across the Atlantic scattered the ships. By the time the fleet limped into Jamestown, only three ships were left.

In fact, the ships had brought more hungry mouths than supplies. With Smith gone and the Powhatans blocking off any chance of trade, the colony began to starve. First, the colonists ate the horses that had come with the ships. Then they began eating the rats, dogs, and cats.

As winter set in, Starving Time became more dire. Colonists began boiling their shoes to eat the leather. With nothing else to eat, they began digging up corpses.

“And now famine beginning to look ghastly and pale in every face that nothing was spared to maintain life and to do those things which seem incredible, as to dig up dead corpse[s] out of graves and to eat them.”

Several other accounts of the period reference these acts of cannibalism. But for many years, they were dismissed as myths or attempts to discredit the colony and the company that supported it. But in 2013, archeologists made a gruesome discovery that proved the accounts were true.

In a trash heap dating from the period at the site, researchers found the remains of a 14-year-old girl. From cut marks along the bones, it was obvious that she had been butchered.

Doug Owsley, head of physical anthropology at the Smithsonian, examined the remains and concluded that it was the work of people who had little experience butchering animals. “There is a hesitancy, trial, and tentativeness in the marks that is not seen in animal butchery,” he said.

The cuts were made by desperate people, driven to eat their dead by Starving Time. “They were clearly interested in cheek meat, muscles of the face, tongue, and brain,” Owsley continued.

There’s a lot we don’t know about the girl in question. But based on an examination of her bones, it was clear that she came from England. The high level of nitrogen in her bones suggests that she ate a lot of protein, which means that she came from a high-status background since meat was so expensive.

Researchers began calling the victim “Jane,” and an analysis of her skull allowed them to recreate an image of what her face might have looked like. 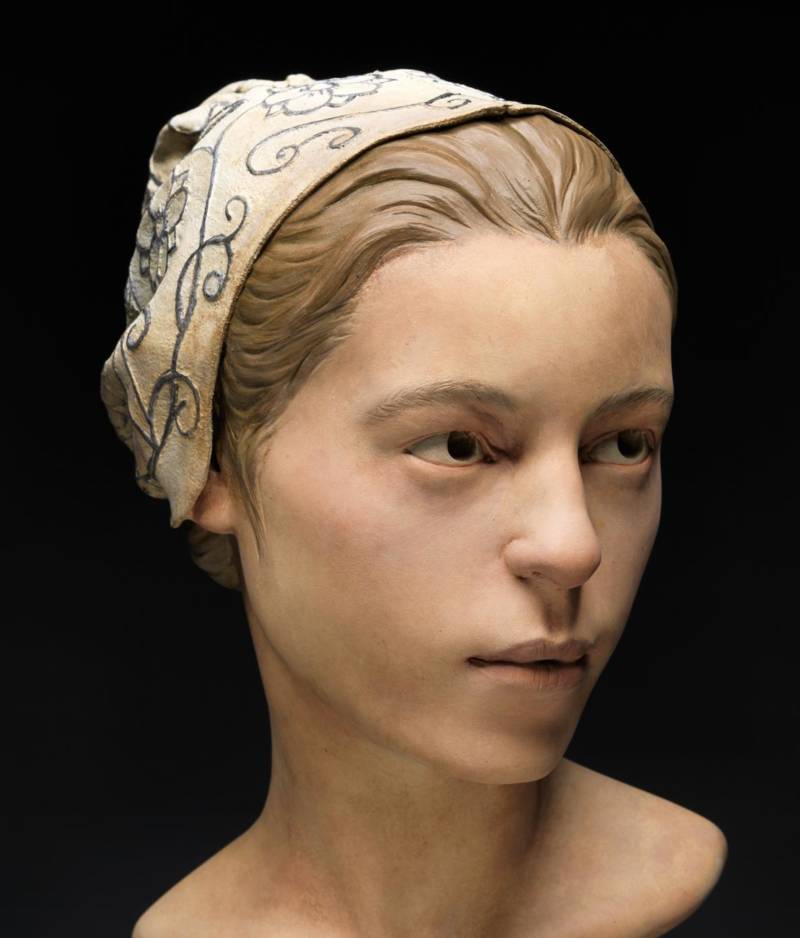 Most likely, she was one of the colonists who arrived with the three ships in 1609. If that’s the case, then it means she didn’t survive long in Jamestown. It’s obvious from the cut marks that she was dead by the time she was butchered. She may have died from one of the diseases circulating among the colonists shortly after she arrived.

Given how desperate the settlers were in 1609, it’s not hard to imagine that Jane might have been butchered after her death. In some cases, the colonists didn’t even wait for people to die before eating them. Percy’s account makes mention of a man who murdered his pregnant wife and ate her. The man was put to death for his crime.

Time looks at evidence of cannibalism at Jamestown.

Yet while the colonists didn’t approve of murder, it’s easy to think that eating the dead would have been acceptable, if perhaps never spoken of openly. Cannibalism had likely become an unpleasant necessity. The colonists were doing what they had to in order to survive.

By the time the last of the resupply ships arrived in the spring of 1610, only 60 of the 300 settlers who had been in the colony at the beginning of the winter were alive. Seeing the state of the colony, the captain ordered the remaining survivors onto the ship. They were going to sail back to England.

The colony had clearly failed.

But as the ship left port, the colony’s new governor, Lord De la Warr, arrived. He demanded that the colonists return to rebuild Jamestown. With De la Warr’s fresh supplies, the remaining survivors managed to hold on for another year.

Starving Time turned out to be the worst period in Jamestown’s history. Over the next few decades, the colony began to thrive. It proved to be an important element in England’s eventual colonization of North America.

And of course, Jamestown owes its success to the sacrifices of early colonists like Jane.

Next, read the disturbing story about the cannibalism of the Donner party. Then check out the story of cannibal Issei Sagawa, who’s walking free and plans to eat humans again.