Why Vercingetorix was Julius Caesar's arch-rival and is still regarded as a national hero in France to this day. 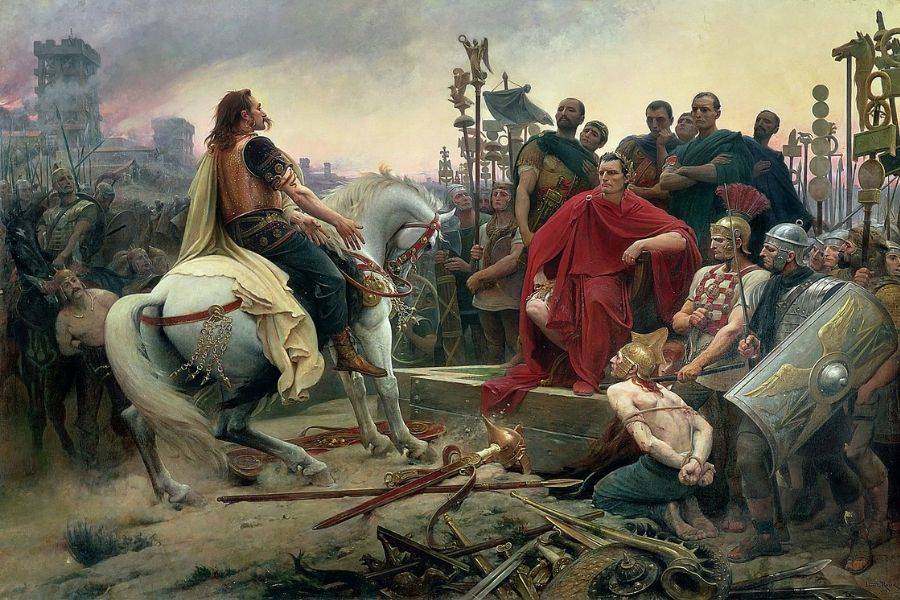 In stories of ancient Rome, Julius Caesar is obviously a central figure. Throughout his tenure as a politician and fighter, Caesar made a name for himself fighting against and alongside some of the most important leaders the world had seen: Antony, Pompey the Great, and Cleopatra.

But before he rose to dictatorial power, he laid siege to Gaul (in what is now France) plus parts of Belgium and Switzerland. There, a fierce warrior called Vercingetorix organized disparate tribes to defend their homeland against Caesar. And Vercingetorix valiantly rallied the Gauls under his banner and became one of the few warriors to nearly thwart Julius Caesar.

Most of what we know about Vercingetorix appears in Caesar’s infamous — and biased — memoirs, leaving us little to go on. In fact, perhaps Vercingetorix was even not his birth name. Scholars believe that, in a proto-Celtic tongue, “Vercingetorix” roughly translates to “the greatest king of warriors.” Thus, this moniker would have been a title bestowed on a successful leader in battle, not necessarily one he was born with.

Descriptions of the warrior often refer to him as tall, handsome, and charismatic. He was a revered public speaker, known for rallying troops and townspeople alike with his inspiring and moving speeches. For his defense of his lands against the Roman invaders, he is remembered as the first national hero of France. 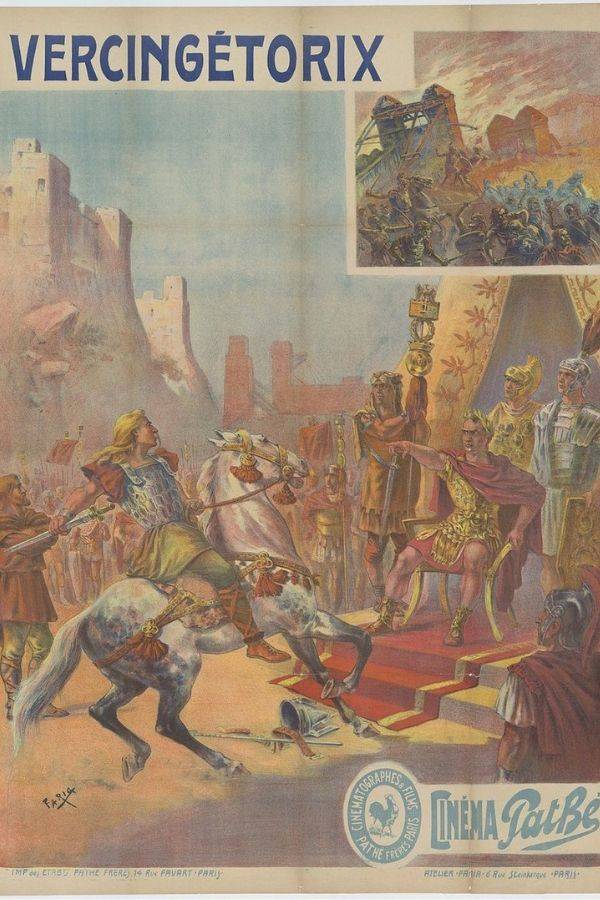 Vercingetorix grew up as a warrior in the Arverni tribe. In his Gallic Wars, Caesar records that Vercingetorix’s father, Celtillus, once “had held the chieftainship of all Gaul.” Celtillus had made a name for himself as a unifier, bringing lesser tribes under his wing and encouraging peace but using military tactics against opposing tribes when necessary.

Because there was often turmoil amongst the fierce Gallic tribes, they became prime targets for Caesar’s divide-and-conquer tactics. In the 50s B.C., Caesar became the governor of the province of Gallia Narbonensis. Conquering the remaining independent parts of Gaul would bring in cash and make him look good. He invaded under the pretext of helping Gallic tribes allied to Rome fight off their rivals. And he’d soon come to meet the mighty Vercingetorix. 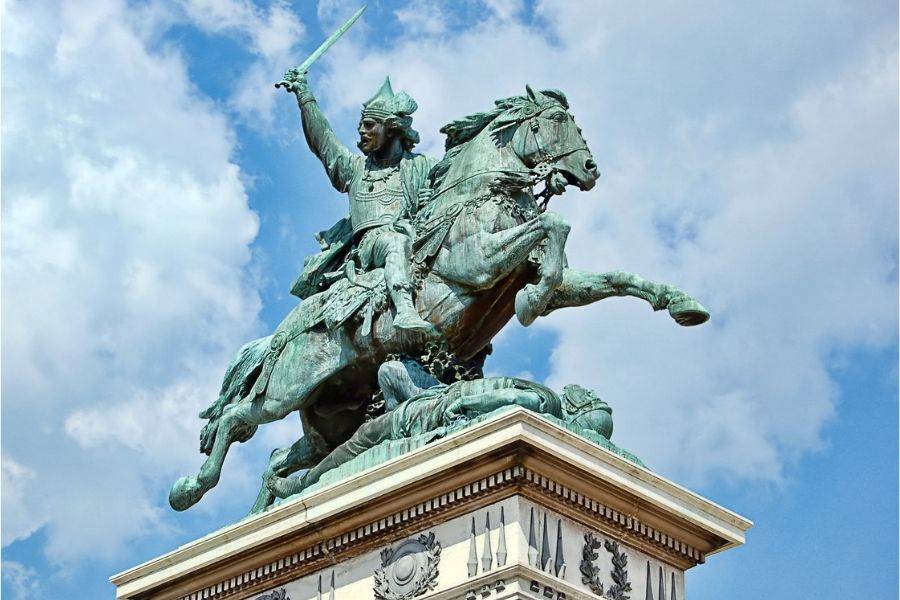 Because they had succeeded in governing themselves for hundreds of years, the Gallic tribes did not take kindly to news of a Roman warrior coming north to conquer their lands. One tribe, the Eburones, attempted a half-baked revolt on the ever-nearing Roman forces.

Not one to sit out a bloody battle, Caesar took control of his forces and led the attack on the Eburones himself in 57 B.C. In the so-called Battle of the Sabis, Caesar wiped out pretty much the entire tribe. He sold the survivors into slavery and took their lands for himself.

Over the next five years, Caesar continued to oppress tribe after tribe of Gallic warriors. Unsurprisingly, the youth of Gaul hated the encroaching conqueror.

The Prince That Was Promised 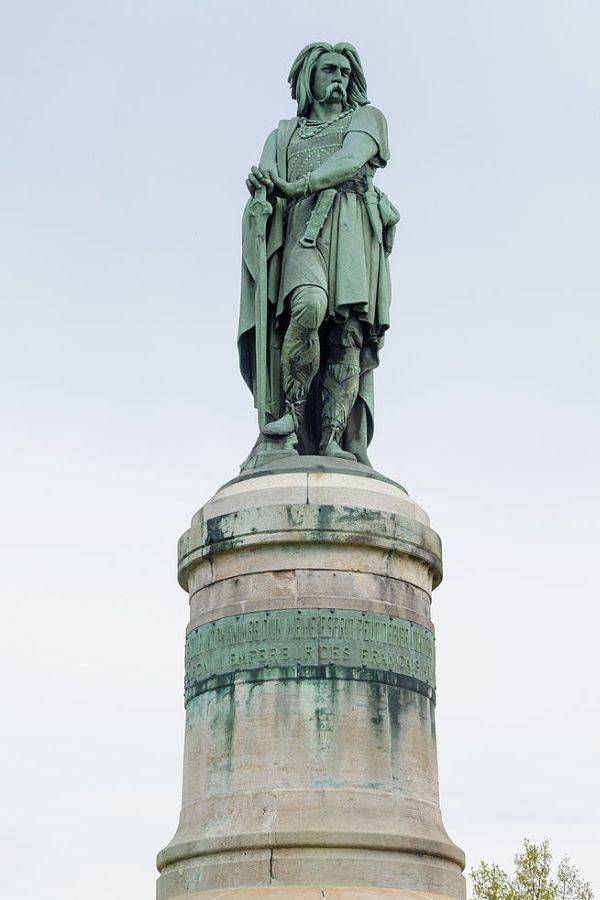 Meanwhile, Vercingetorix had seen the Eburones and other tribes wiped out. He and other young warriors became fired up when the Gauls in Cenabum (near modern Orléans) revolted and slaughtered numerous Roman officials.

The Arverni council of elders did not agree with Vercingetorix’s desire to fight. His uncle Gobannitio believed the risk was too great. Vercingetorix, however, had other ideas. In Gallic Wars, Caesar notes that the princeling “was cast out of the town of Gergovia, but he did not give up for all that; and in the fields he held a levy of beggars and outcasts.”

Despite the warnings from the elders, he gathered the men he could. Persuasively, he began “urging them to take up arms for the sake of general liberty.” Proclaimed king by his followers, Vercingetorix then “cast out of the state his opponents by whom he had been expelled a short time before.” He not only persuaded the Arverni to join him, but united the many different Gallic tribes under his singular command.

Once Caesar got word of his opponents allying against him, he quickly returned from Rome. Meanwhile, Vercingetorix began looting and plundering lands indirectly under Caesar’s control. Such raids not only boosted morale but brought more supplies. These successes led to more tribesmen joining the cause. 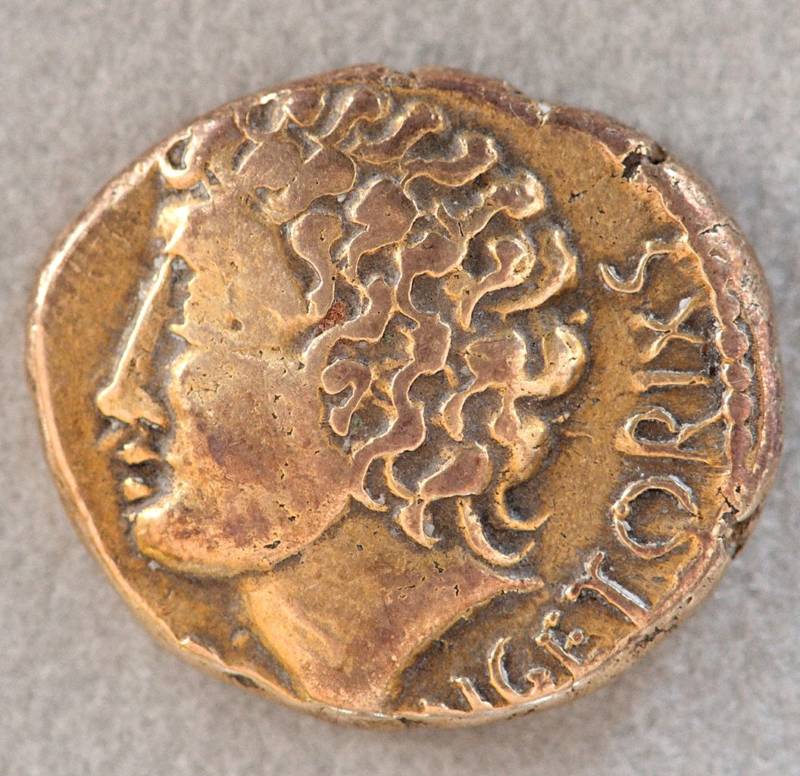 To his shock and delight, almost all of the tribes responded in earnest, packing up and preparing for war. Meanwhile, in 52 B.C., the Gauls laid siege to Gergovia, then allied with Caesar. As luck would have it, on the day of their planned attack, Caesar was traveling. His second-in-command, Labienus, was leading the Roman troops.

Labienus was woefully ill-equipped to lead a battle. He was prepared to handle practiced, orchestrated warfare, not the wild, guerilla-style attack Vercingetorix was leading. Instead of directly attacking the Roman soldiers, Vercingetorix and his tribesmen attacked their rivals’ supplies and their shelters and then disappeared into the night. Their superior knowledge of the land proved to be their greatest strength.

Vercingetorix’s forces knew how to survive off of the land, while the Romans relied on supplies they brought with them. Without supplies, the Roman soldiers were as good as dead. Before long, Caesar returned to the battlefield to lend a hand. 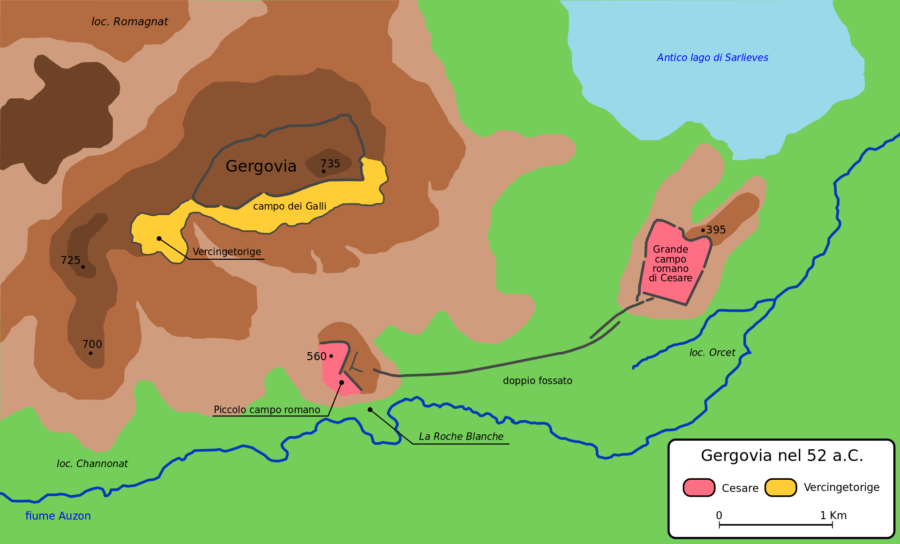 However, Vercingetorix had applied a “burn-it-all” approach. The Gauls set fire to anything in their way — including towns, villages, and supplies — that could possibly help the Romans. Caesar himself commended the battle tactics of Vercingetorix:

“The matchless courage of our troops was met by all manner of contrivances on the part of the Gauls; for they are a nation possessed of remarkable ingenuity, and extremely apt to copy and carry out anything suggested to them.”

Unfortunately for Vercingetorix, his successful battle plans had an expiration date. He began to lose battles, like the Siege of Avaricum, to Caesar. More and more often, he began to retreat. He ultimately made a last stand at the fort of Alesia in September of 52 B.C. However, the Romans knew this and took advantage of it, trapping the Gauls when they least expected it. 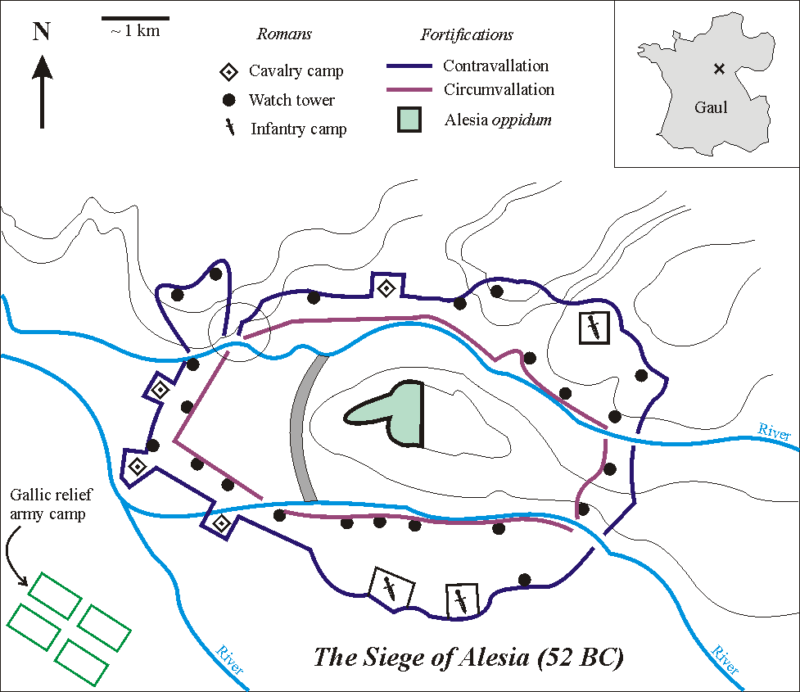 In his Life of Caesar, ancient historian Plutarch recounts that “all that was mightiest among the nations of Gaul assembled and came in arms to Alesia.” Many were holed up inside the walls, while others harried the besieging Romans from outside the walls. Sandwiched between enemies, Caesar still managed to conquer both forces and win the day.

The Fall Of A King

At this point, the story splits. Some accounts claim that Vercingetorix’s people blamed him for backing them into a corner, then handed him over to Caesar. Others say Vercingetorix realized his mistakes and willingly surrendered. 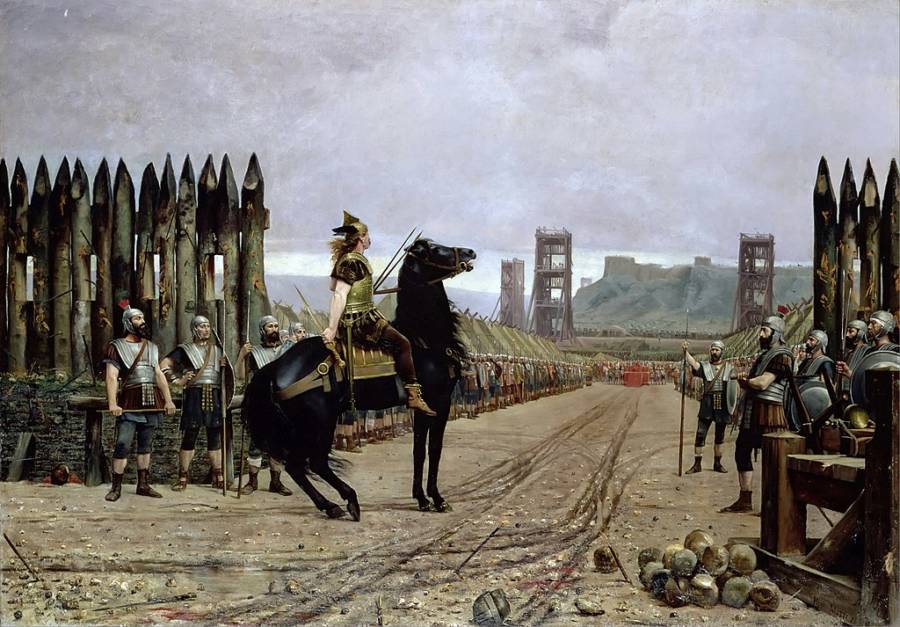 Whatever the case, Vercingetorix walked deliberately into Caesar’s camp and up to his tent. At Caesar’s feet, he removed his armor and knelt in surrender. However, rather than spare him, Caesar did what Caesar did best: took Vercingetorix home to Rome to make an example of him.

Caesar took Vercingetorix back to Rome, where the warrior forcibly participated in the victor’s triumph. Six years later, in 46 B.C., the Gallic hero died in a Roman prison, likely strangled. And thus ended the valiant life of Vercingetorix the Gaul. With his death, though he was defeated, his popularity grew. Word of his heroism and victory against all odds spread and he was revered as a freedom fighter — as he still is today.

After this look at Vercingetorix, the ancient Gallic chieftan who nearly defeated Caesar, read about the Picts, the ancient Scot wildmen who held off the Romans. Then, discover the most interesting facts about Ancient Rome.