Gorillas In The Crossfire At Africa’s Oldest National Park

The battle for Virunga National Park pits rangers against poachers and leaves gorillas in the crossfire. Thankfully, they're now faring better than ever.

TWO GROUPS OF MOUNTAIN GORILLAS WERE SLAUGHTERED in the summer of 2007, one after the other.

First, two females were shot, with one’s infant left alive and later found still clinging to its dead mother’s breast. Then came the killing of three females and a silverback, shot, burned, and, in a strange move for poachers, left otherwise intact, no trophies or meat taken for sale on the black market. 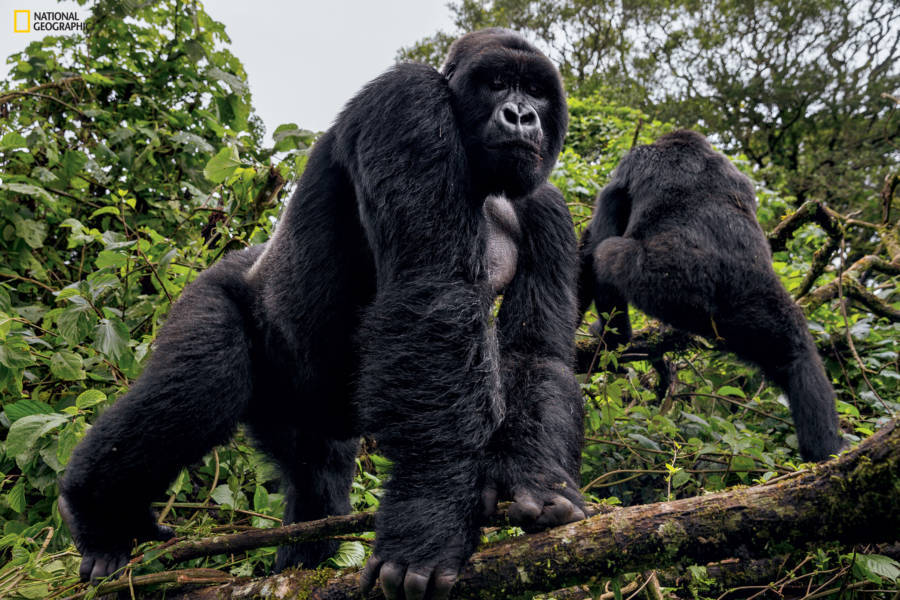 Photograph by Brent Stirton, © Brent Stirton / National GeographicA silverback from the 22-member Mapuwa family emerges from the jungle to keep an eye on a ranger patrol. Virunga National Park has largely succeeded in protecting mountain gorillas, its top tourist draw, from violence. Their population is now growing.

Brent Stirton, the South African photographer who captured the instantly famous funereal images of that second group of gorillas, would later go on record as suggesting that the gorillas were likely killed to send a message.

And in Virunga, Africa’s oldest national park, where conservationists, militias, poachers, and industrialists have long been embroiled in bitter conflict, that’s precisely the kind of message that sometimes gets sent.

Stretching out over 3,000 square miles along the northeastern border of the Democratic Republic of the Congo, Virunga is home to oil reserves that the British want to tap, forests that charcoal traders want to plunder, animals that poachers want to kill, and conservationists that want to stop virtually all of the above. 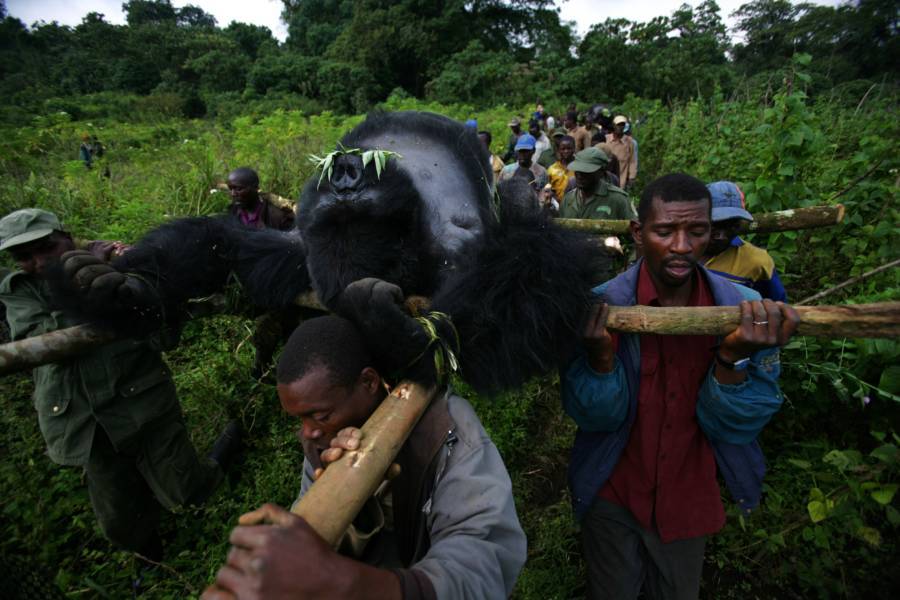 Brent Stirton/Edit by Getty ImagesConservation rangers from an anti-poaching unit work with locals to evacuate the bodies of four mountain gorillas killed on July 22, 2007 in Virunga National Park.

Throw in longstanding, region-wide militia conflicts between warring groups as well and it’s easy to see why, in the words of explorer and National Geographic correspondent Justin Hall, “the forces in the area are as volatile as the volcanoes” that dot the landscape.

And caught in the crossfire, both figuratively and literally, between all these forces are the park’s 480 mountain gorillas.

In the case of the 2007 slaughter, it’s likely that charcoal traffickers who wanted to access Virunga’s forests were sending a message to the conservationists who’d been keeping them out of the forest and saving it for the gorillas.

Now, saving the forests for the gorillas seems to have paid off. While that 480 total feels low when you consider that these animals only exist in four places on Earth, the Virunga population has actually risen nearly 50 percent since the bloody summer of 2007.

Justin Hall speaks with photographer Brent Stirton about the Virunga gorilla massacre of 2007, in this clip from National Geographic Channel's Explorer: Battle For Virunga, premiering June 26 at 8 p.m.

In fact, the total mountain gorilla population across all four of the animal’s habitats has risen since 2007 as well, from less than 700 to 880. But nowhere has it risen quite like it has in Virunga.

Nevertheless, the conservationists, militias, poachers, and industrialists are still at odds, and the battle for Virunga — its land, its resources, its very soul — rages on.

And when Justin Hall ventured to the park for National Geographic Channel’s Explorer: Battle for Virunga, not only did he immerse himself in this battle, he immersed himself in two of its opposing sides, spending time with both the conservationists and the militias working against them.

While it’s easy for all of us to sympathize with the conservationists and park rangers on one side of the battle for Virunga, we must realize that the poachers and militias on the other side are, by and large, desperate people who are simply out of options.

“From afar, it’s easy to look at the principles of conservation and say that we have to defend them,” Hall said. “Conservation is a luxury afforded to people that have choices.”

And the militia with whom Hall embedded himself (part of a fluctuating group of local militias known as Mai-Mai) certainly do not have choices. 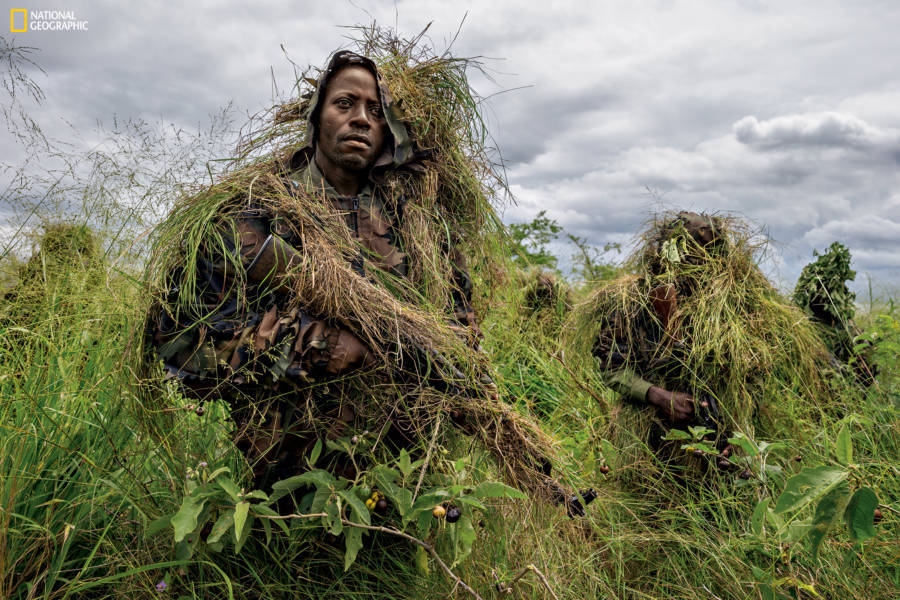 For over 20 years, the Democratic Republic of the Congo and the neighboring countries abutting Virunga have been mired in a myriad of civil wars. As many as 6 million may have died (estimates vary quite a bit) — and that’s before we tally up the enormous number of deaths resulting from disease and famine.

It’s from this “brutally complex history,” as Hall puts it, that the men who form Virunga’s Mai-Mai are born. “They’re pretty angry, pretty bitter, pretty confused, pretty alone…they have nothing but each other left — and they’re angry.”

But there is one thing that the Mai-Mai could have left: natural resources.

Although half of the Democratic Republic of the Congo’s residents live on under $1.25 a day and more than 4 million people live in poverty in the area surrounding Virunga alone, the country is, in terms of natural resources (fertile land, abundant minerals, plentiful water), one of the wealthiest nations on Earth.

But conservation efforts have made accessing much of those resources illegal — and kept many people in poverty.

In the words of National Geographic, “For the 4 million desperately poor residents living in and around Virunga, the park’s borders are an arbitrary distinction, and conservation is just another term for the rich and powerful taking the best for themselves.”

Does that mean that armed men should slaughter groups of gorillas in order to send a message to conservationists? No, but as Hall said, “It shouldn’t take an event like the massacre for us to pay attention.”

And while the 2007 massacre brought plenty of attention to the African mountain gorilla — as it should have — it brought little to no attention to the plight of the desperately impoverished people living around Virunga. 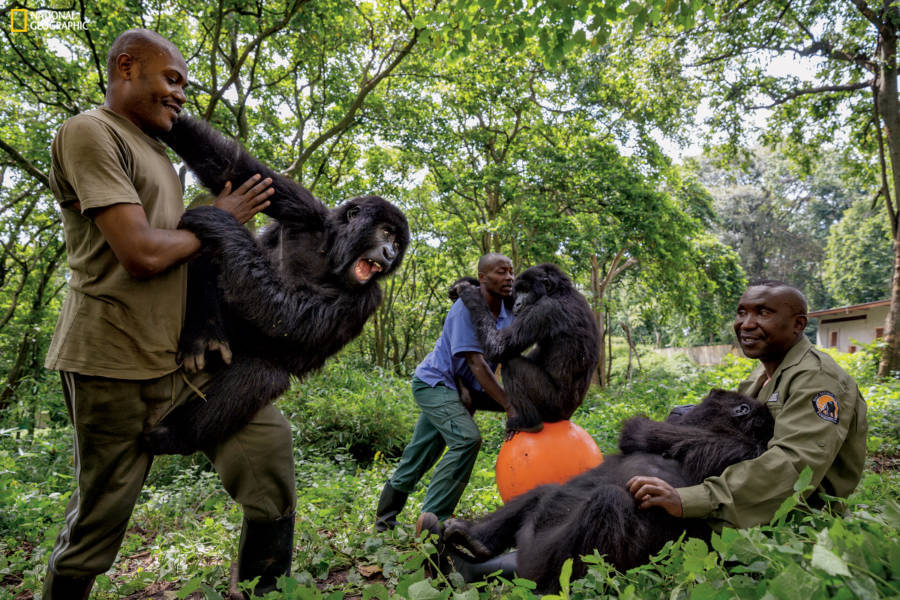 Photograph by Brent Stirton, © Brent Stirton / National GeographicAt the Senkwekwe Center for mountain gorilla orphans, in Rumangabo, Virunga National Park, rangers live around the clock with four juveniles whose parents were killed. The rangers see their families only every few weeks and are very close to their charges. Since no mountain gorilla orphan has ever been successfully returned to the wild, they will always depend on humans.

Today, however, in addition to park rangers’ success in fostering a large spike in the mountain gorilla population, Virunga has undertaken a massive, and massively ambitious, $166 million hydroelectric project with the goal of bringing power to a quarter of the region within five years and creating up to 100,000 jobs.

Many believe that this investment in infrastructure could be just the thing to bring enough money and stability to the region to cool the battle for Virunga.

“I never thought an industrial landscape could be so inspiring,” Hall said. “I can only look at the future with hope.”

And as for the people who live around Virunga, despite the decades of civil war, famine, and disease, Hall still found hope among them. But what he found an even more acute sense of was resilience.

After all, Virunga’s gorillas rebounded after the 2007 massacres and are now stronger than ever.

“Resilience is different from hope,” Hall said. “The resilience, that is something that shines through.” 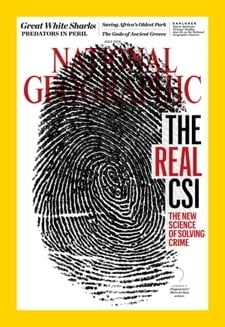