Less than half of the racers in the 1904 Olympic marathon finished the notoriously perilous race — and only after the winner was dragged across the finish line.

The summer games were in St. Louis, Missouri, that year, making it the first modern Olympics held on United States soil. The throngs of spectators were also waiting eagerly, willing an American to cross the finish line first. They nearly got their wish. 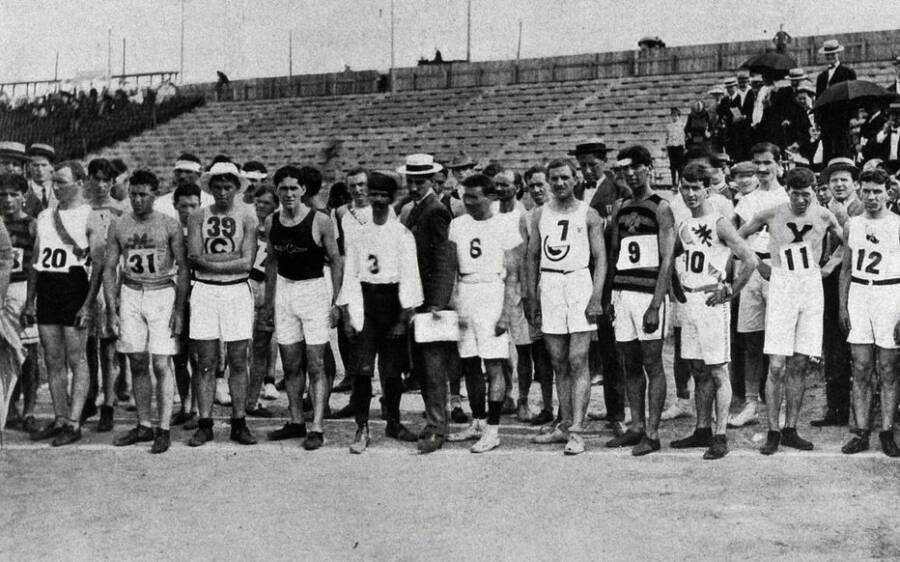 Unknown/Wikimedia CommonsThe 32 doomed runners line up before the 1904 Olympic marathon.

“An American won,” the crowd chanted as young Roosevelt draped the gold medal around the neck of Fred Lorz, a bricklayer who had seemingly come in first place. But then an Olympics official halted the ceremony, and Lorz was disqualified.

His charge? Lorz reportedly “had ridden about three miles in an automobile traversing the course over country roads.” Lorz confessed that he’d covered 11 miles of the course behind the wheel, earning him a lifetime ban from the Olympics. But his debacle was just the beginning in a series of marathon-related disasters that year.

Indeed, several of the competitors who hadn’t cheated were nearly killed in the process, prompting the Olympic committee to consider ending the sport completely.

Why The 1904 Olympic Marathon Was So Difficult 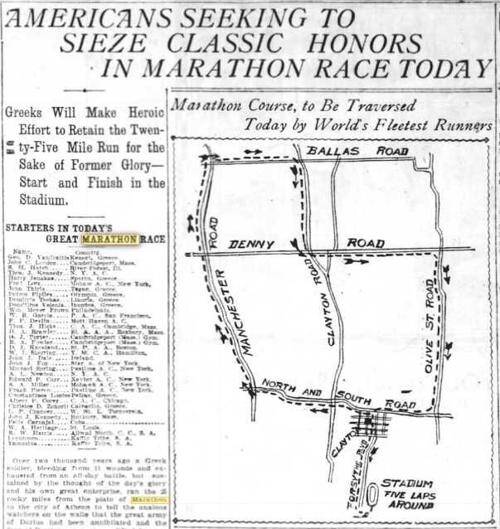 Much about the 1904 Summer Olympics was unprecedented. For one thing, it was the first time the games were being held in the United States and it also coincided with that year’s World’s Fair.

As such, Olympic organizer James Sullivan wanted to do something equally new and exciting for the games’ biggest event: the marathon. Sullivan resolved to design a 24.8-mile course that was intended to push the runners to the absolute edge of their abilities.

But although the course was about two miles shorter than any other year, it proved to be the most disastrous.

As the Courier reported at the time, “The course led over hills and through dales innumerable, being pronounced one of the most uphill and downhill courses ever traveled.” In addition to a challenging course, the race started at 3:00 p.m. on a 92-degree day. And Sullivan intentionally limited access to water during the race.

“Don’t get into the habit of drinking and eating in a marathon race,” Sullivan warned in a 1909 book. “Some prominent runners do, but it is not beneficial.”

Purposeful dehydration, Sullivan declared, improved athletic performance, and so the race had a single water station positioned at mile 12. 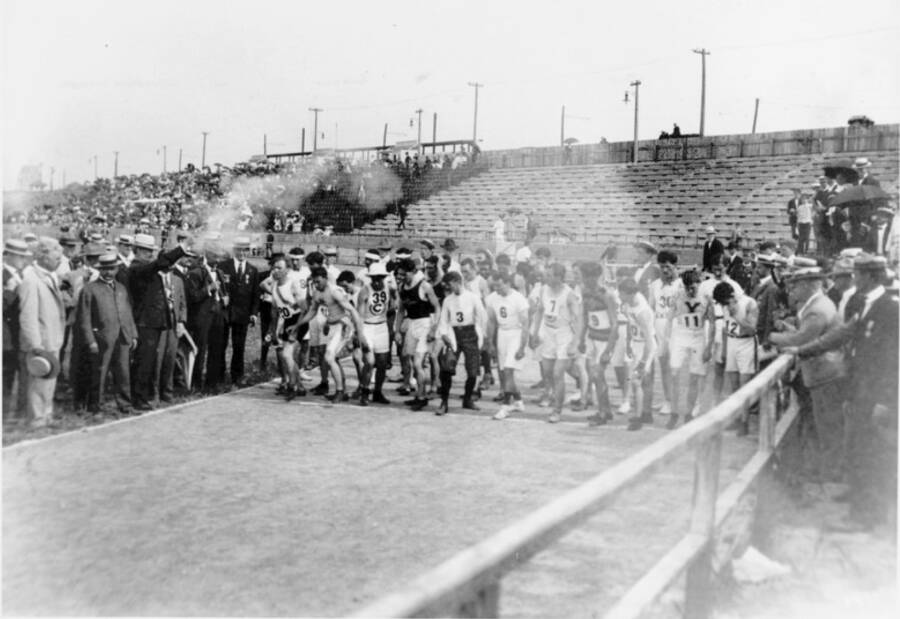 Wikimedia CommonsThe runners took off at 3:03 p.m. on a sweltering summer afternoon.

Sullivan also had a darker goal. The Olympics, he felt, should prove the athletic superiority of white men. To underscore the inferiority of other races, the 1904 Olympics hosted an event dubbed “Anthropology Days,” where non-white competitors faced off in events that they were often attempting for the first time.

In fact, two men brought to the fair as a part of the “South African exhibit” competed in the marathon, Tswana tribesmen Len Taunyane and Jan Mashiani. Having never run such a race before, it was remarkable that they finished — and without shoes, no less.

Who Were The Marathoners?

The 32 marathoners competing in 1904 were a diverse group. They included Seneca Nations athlete Frank Pierce, the first Native American Olympian; Len Taunyane and Jan Mashiani, the only Black athletes to represent South Africa before the end of Apartheid; American and professional clown Thomas Hicks; and Cuban man Félix Carbajal, a former mailman. 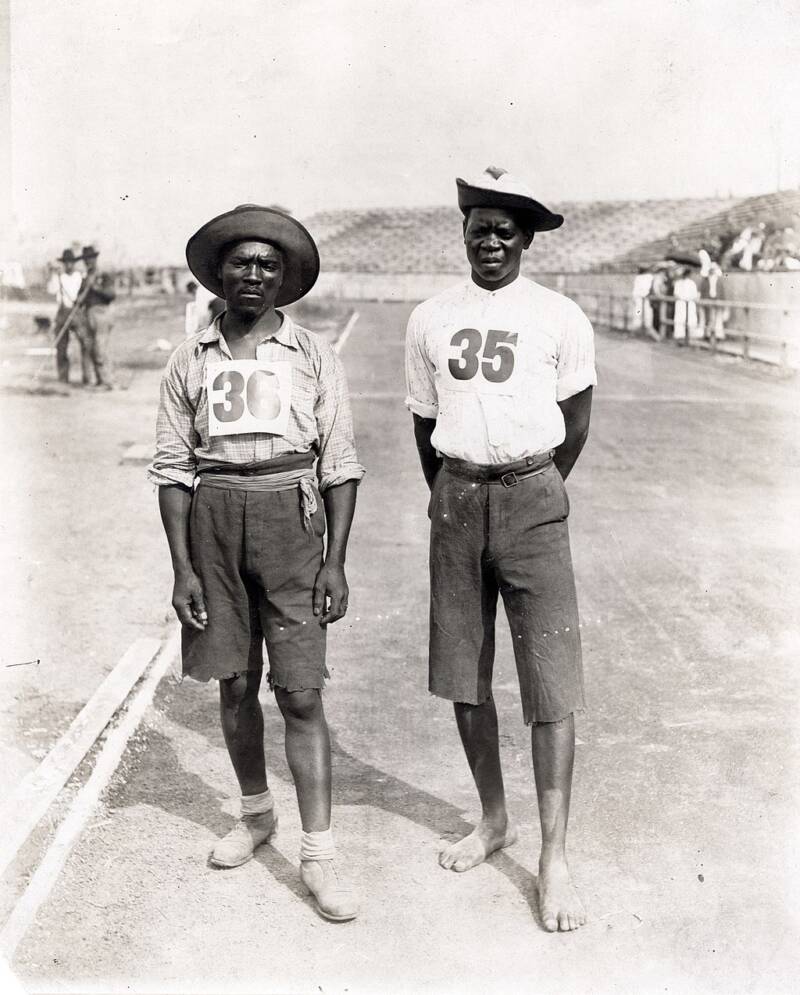 Jessie Tarbox Beals/Missouri Historical SocietyTwo members of the Tswana tribe of South Africa volunteered to participate – even though they’d never run a marathon before. Both finished the race.

The race began with five loops around a track. Then, the runners set off on dirt roads, often trailing behind a pack of horses and automobiles that kicked up a near-fatal amount of dust. American competitor William Garcia landed in the hospital for emergency surgery after the race because of the dust.

The brutal hills along the course were “the most difficult a human being was ever asked to run over,” one official admitted. And the marathoners faced more than dust and hills. The route took the runners across train and trolley tracks. They also had to dodge traffic.

Many of the runners experienced terrible cramps which forced them to drop out. After eating rotten apples, Felix Carvajal passed out in a field. Around the same time, Lorz hopped into a car and headed for the finish line. 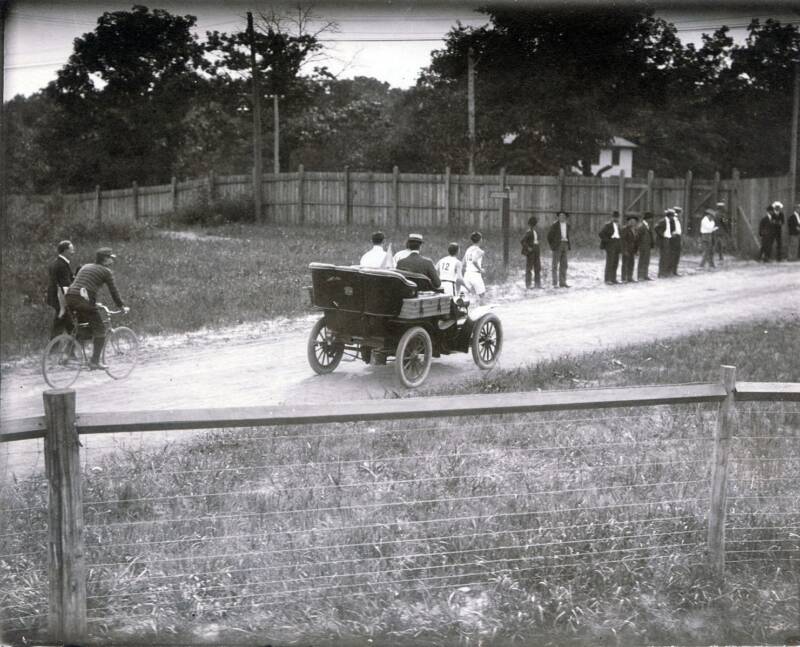 Missouri History MuseumAutomobiles followed the runners, kicking up dust and offering a quick escape from the race for less scrupulous participants.

Thomas Hicks was a favorite going into the 1904 Olympic marathon, but he nearly dropped out 10 miles into the race after begging his handlers for water, who refused.

Around the 18-mile mark, Hicks tossed back a mix of strychnine — a.k.a rat poison — and raw egg whites. The deadly poison, given in small doses, acted as a stimulant, and the Olympics did not ban performance-enhancing drugs in 1904.

But the concoction did not seem to help Hicks, and he barely managed to trot along the route until his handlers gave him a second dose along with a shot of brandy.

“His eyes were dull, lusterless,” wrote one race official about Hicks. “The ashen color of his face and skin had deepened; his arms appeared as weights well tied down; he could scarcely lift his legs, while his knees were almost stiff.”

The now hallucinating marathoner begged to lie down, convinced he was still 20 miles from the finish line. His handlers, so close to victory, lifted Hicks and carried him across the finish line — while Hicks’ legs dangled in the air.

He nonetheless became the first American to win an Olympic marathon — but he never raced again.

Banning ‘Man-Killing Event’ From The Olympics 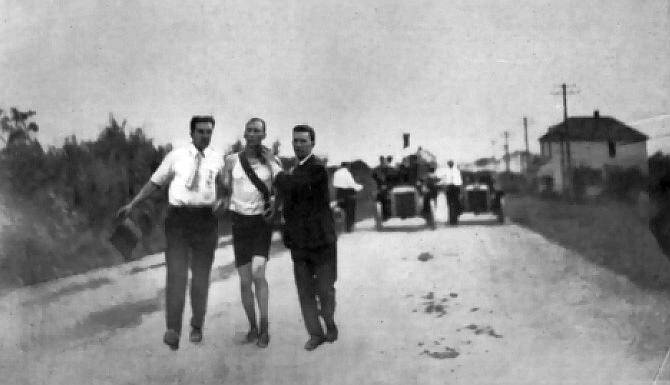 No one died at the 1904 Olympic marathon, but several came close. If another hour had passed before Garcia was rushed to surgery, the man likely would have bled to death.

In spite of the fact that both of South Africa’s runners had never before run a marathon and raced barefoot, they placed 9th and 12th in the competition. And that was after wild dogs chased one of the men a mile off-course.

As for the winner, Hicks lost eight pounds during the race. “Never in my life have I run such a tough course,” Hicks said. “The terrific hills simply tear a man to pieces.”

Hicks’s winning time of 3:28:53 remains the slowest Olympic marathon time in history, even after the race upped the standard length to 26.2 miles in 1921.

The disastrous marathon also holds the record for the lowest percentage of marathoners to complete the race. While 32 runners set off for gold, only 14 crossed the finish line.

The press dubbed the race a “man-killing event,” and Sullivan joined the naysayers. “A 25-mile run … is asking too much of human endurance,” he declared.

But the event returned in 1908 for the London Olympics. Not surprisingly, only a single marathoner from 1904 gave it a second try.

The 1904 race nearly ended the marathon at the Olympics. Learn about some more weird Olympic sports that nearly got cancelled, too. Then, read about Kathrine Switzer, the first woman to run the Boston marathon.