Alice Roosevelt was just as strong-willed and outspoken as her father Theodore Roosevelt, who admitted even he could not control her.

Alice Roosevelt Longworth — Teddy Roosevelt’s oldest child — was the most eccentric first daughter to ever enter the White House and became the strong-willed and unbridled face of the New Woman movement of the early 1900s. She danced on the rooftops of millionaires, wore a pet garter snake as an accessory, and needle-pointed “If you haven’t got anything nice to say about anyone, come and sit here by me” on a pillow in her home.

Her independent and free-spirited nature breathed new life into the very idea of young womanhood in the early 20th century as the suffrage movement was gaining steam. 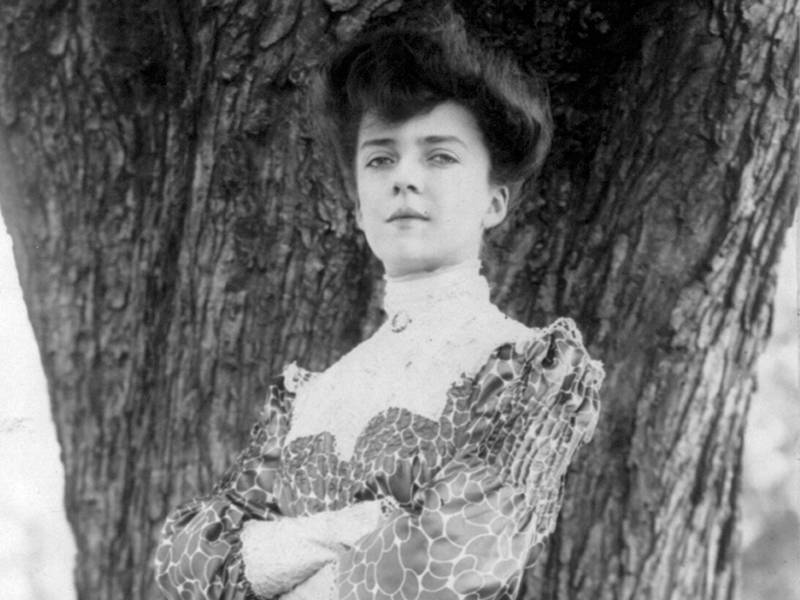 She herself would be involved in both that suffrage movement and the sexual revolution some half a century later. Indeed, throughout most of her nearly 100 years on Earth, Alice Roosevelt Longworth was one of the key faces of modern and celebrated American womanhood.

The Oldest And Loneliest Child Of Theodore Roosevelt

Alice Roosevelt was born the only daughter of Theodore Roosevelt and his first wife, Alice Hathaway Lee, who he loved desperately. Two days after giving birth on Valentine’s Day of 1884, Hathaway died of kidney failure that went undetected thanks to the pregnancy on the fourth anniversary of their engagement and the same day Teddy’s mother died.

Though a then 25-year-old Teddy had named his little girl for his wife, he was so overcome with grief that he could not call his daughter by her name, Alice Lee, and instead called her “Baby Lee.” Not only would Roosevelt never say “Alice” again, but he wouldn’t even let anyone else say it around him either.

Following such tragic beginnings, Alice Roosevelt’s early years were lonely and isolated. Teddy took off for his ranch in the Badlands of North Dakota and left his daughter with his sister Anna in New York. While away, Teddy lived despondently as he worked through his all-consuming grief. He beat up a gunfighter in a saloon and he hunted buffalo, though he did also write to his daughter and think of her often. 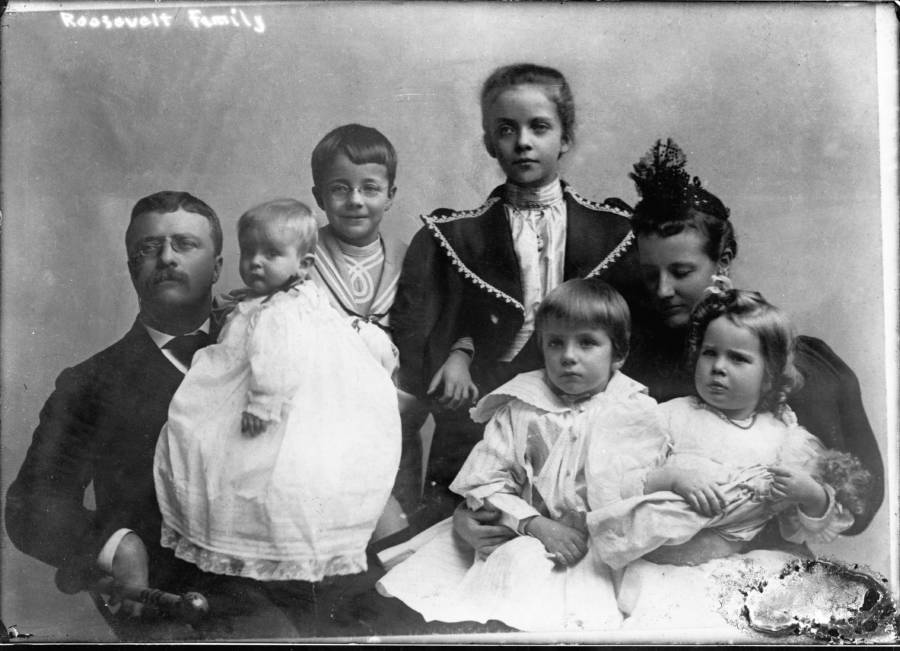 Meanwhile, “Baby Lee” remained in New York with her aunt Anna, who had a huge influence on her due to her strong and independent nature. Alice Roosevelt would come to emulate those characteristics as she herself started growing into an outspoken young woman.

When Teddy returned from his trip in 1886, he married his high school sweetheart, Edith Carow. The new family moved to Oyster Bay, Long Island, and together Teddy and Carow had five more kids. But tensions quickly formed between Teddy’s new wife and his oldest daughter.

Carow was deeply jealous of Roosevelt’s past relationship with his first wife and took out these insecurities and frustrations on the young Alice Roosevelt. She even once angrily told the girl that if her mother had lived, she would have bored Teddy to death. Matters only worsened between the two as Baby Lee grew into an attractive young woman.

Meanwhile, Teddy too grew distant from his daughter, who was often angered by her father’s refusal to call her by her name. She consequently felt removed from him and believed that he preferred her half-siblings with Carow over her.

At the same time, Alice Roosevelt became ever more strong-willed and fiercely independent. Carow could not control her and implored Teddy to send the teenage girl to a boarding school in New York City. The fiery young girl replied to her father by writing: “If you send me, I will humiliate you. I will do something that will shame you. I tell you, I will.”

To Carow’s utter dismay, Teddy relented. “She had the habit of running the streets uncontrolled with every boy in town,” Carow would gossip. Thus, they sent Alice Roosevelt back to her aunt Anna.

The Debauchery Of Alice Roosevelt Ensues 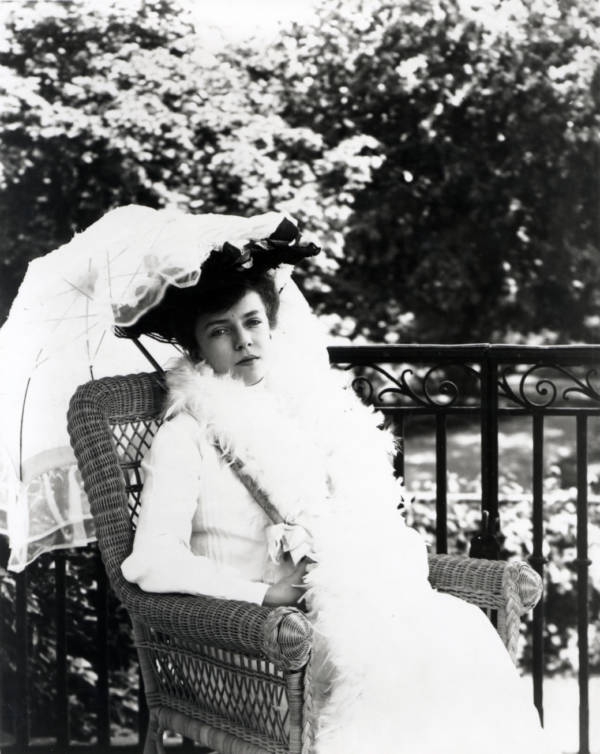 Library of CongressAlice Roosevelt looking luxurious with a parasol.

Alice Roosevelt was against marriage. She distrusted men, she was headstrong, and she regarded herself as a solitary woman in her own right. But her strong personality and then-shocking single-woman lifestyle became great fodder for gossip and high society magazines.

Teddy himself was somewhat ashamed of his daughter’s behavior and the two were at constant odds with each other about the trajectory of her life as she had quickly become the antithesis for what a young woman of her time was supposed to be. Meanwhile, Teddy took the presidency in 1901, and now in the public eye more than ever before, Alice Roosevelt immediately became one of the first and biggest celebrities of the early 20th century.

A year into her father’s term in 1902, she christened Kaiser Wilhelm of Germany’s yacht and captured the eye of the world. The Kaiser later named a boat for her and installed a photo of her in the ship.

But she both ignored and was irritated by the media’s attention and her cool attitude only caused much of the public to fall in love with her more. “She has become one of the most regarded women in the world,” the Tribune wrote of the now-17-year-old.

Alice Roosevelt was consequently nicknamed Princess Alice and began making headlines left and right. Every time she was spotted out with a man, people speculated she’d marry him and, whether in the world of dating or otherwise, all her fearless and audacious exploits were eagerly documented by the media.

The papers were there when she became the first woman to drive the 45 miles in a car from Newport to Boston, they saw her as she raced said car up and down the streets of Washington, smoked publicly and often on the roof of the White House, chewed gum, played poker, wore pants, partied all night with the Vanderbilts and slept till noon. 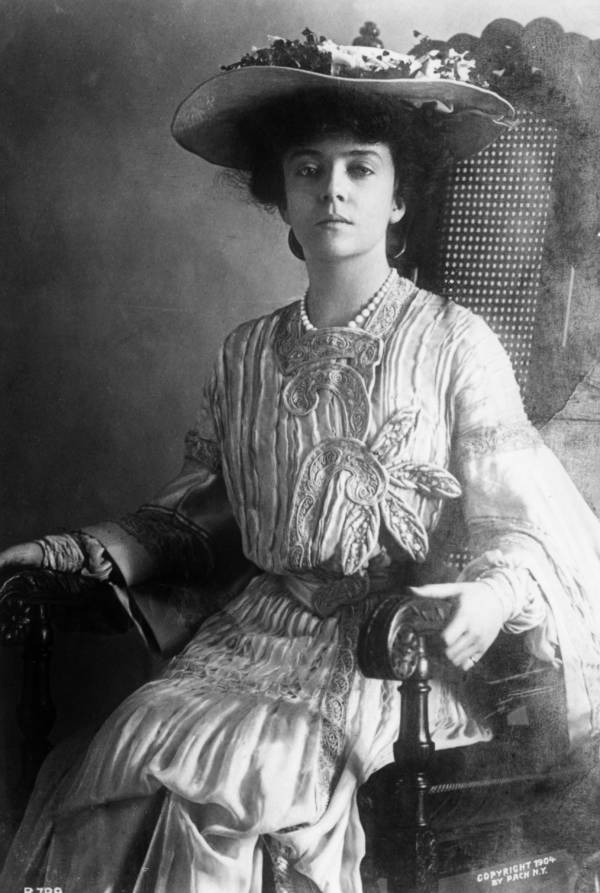 She kept a dagger, her pet snake named Emily Spinach, and a copy of the Constitution in her purse. Her father lamented how her shenanigans would even appear before real news in the papers. she even went so far as to phone in tips about her own whereabouts to the papers so that she could receive cash rewards for the information.

Later in life, Alice would recall her debaucherous teenhood. “I must admit a sense of mischief does get hold of me from time to time,” she said in an interview, “I’m a hedonist. I have an appetite for being entertained.”

She would be banned from the White House twice after her father left office in 1909, once for burying a voodoo doll of Secretary of War William Howard Taft’s wife in the yard, and a second time for consistently badmouthing new president Woodrow Wilson.

“I can be president of the United States — or — I can attend to Alice. I cannot possibly do both!”

Both despite and because of this, many young women viewed Alice Roosevelt as the future of their gender and cheered for her whenever she passed on the streets and pressed up against her car as if she were a superstar on the red carpet. She became the face of the New Woman movement.

And when Teddy died in 1919, Alice Roosevelt took up her father’s political causes to honor him. She became known as the “other Washington Monument” for her constant involvement in politics. 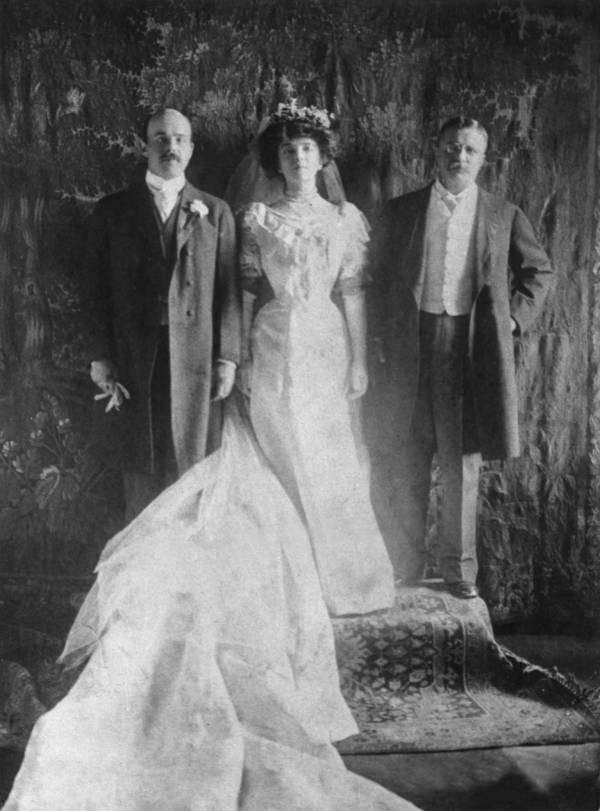 While on a tour in Asia under the watchful eye of William Howard Taft in 1905, Alice Roosevelt met her future husband, Congressman Nicholas Longworth.

Longworth was a wealthy womanizer and a staple of the social scene in Washington — who also looked pretty much like Theodore Roosevelt. And Alice Roosevelt “more or less” fell in love with him, or so she told Taft while on their tour. On her trip home, she became determined to beat the Japan-to-New York travel time record — which she did.

Longworth also partook in such adventure and debauchery and the two lived their early years together in a state of revelry. They married in the White House in 1906. Alice Roosevelt Longworth, true to form, cut her wedding cake with a sword when the knife didn’t work for her. 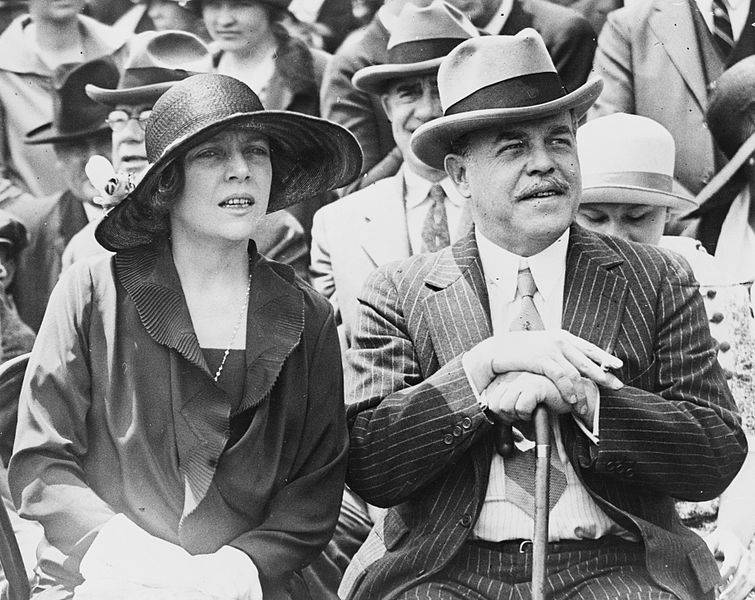 But their revelry didn’t subside after they began their life of domesticity together. Both partied often and had various indiscretions even shortly after the honeymoon, though they remained married until Nicholas’s death in 1931. However, Alice Roosevelt Longworth had begun a significant relationship with Senator William Borah in the 1920s, and maintained that the daughter she bore in 1925, her only child, was his.

Her daughter, Paulina, would struggle with depression and addiction until her early death in 1957, leaving Alice Roosevelt Longworth to care for her now-orphaned granddaughter.

Later Years And Legacy Of The White House Wild Child 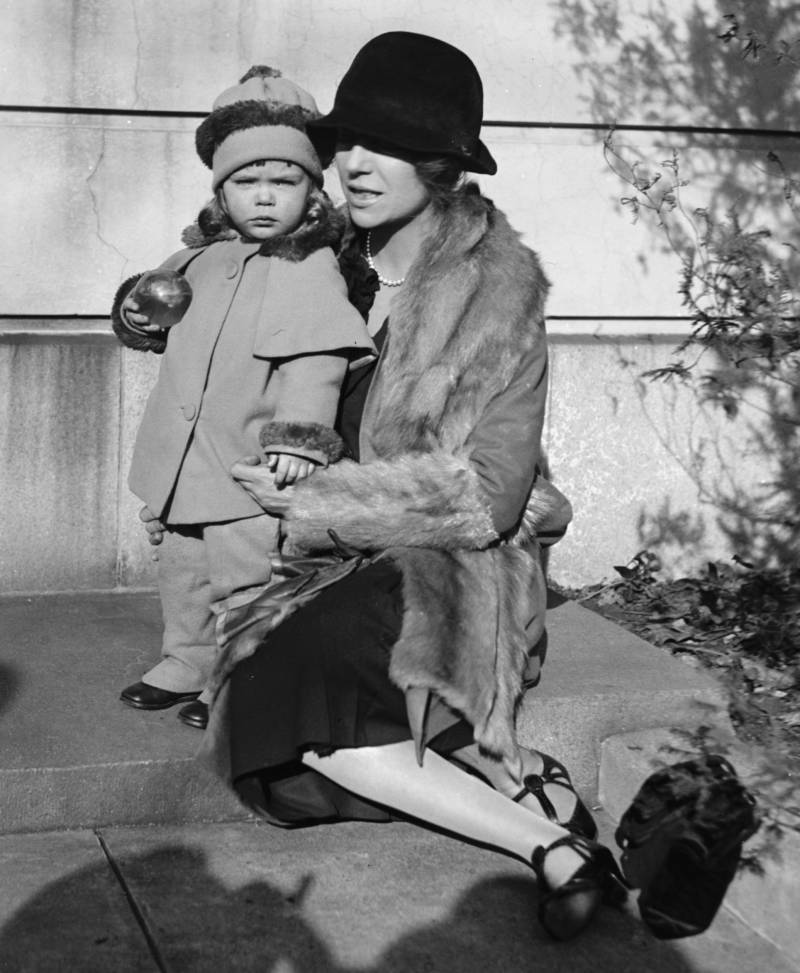 In her later years, Alice Roosevelt Longworth became known for her impetuous and biting manners. She had a needlepoint pillow which read “If you haven’t got anything nice to say about anyone, come and sit here by me.”

She did remain active in politics and served on the national board of directors of America First (a committee dedicated to keeping the U.S. neutral during World War II — until Pearl Harbor) while voicing her opinions on matters of national importance loudly in print and in person. She was friends with the Kennedys, Nixons, and the Johnsons.

Later, Alice Roosevelt Longworth stayed active in causes important to American woman, calling Gloria Steinem “one of my heroes” and saying, when asked her opinion of the sexual revolution, that she’d always lived by the old adage of “Fill what’s empty, empty what’s full, and scratch where it itches.” 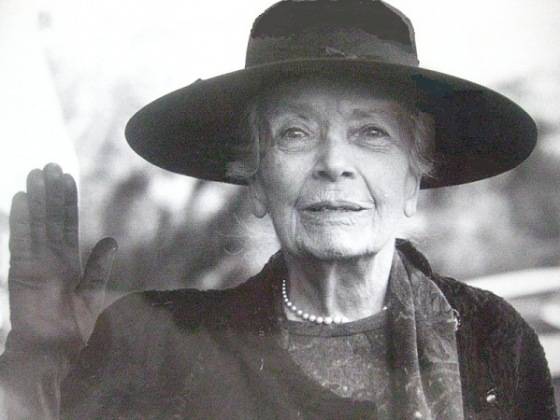 Her cousin, Eleanor Roosevelt, however, would recall that Alice Roosevelt Longworth led a life that was “one long pursuit of pleasure and excitement and rather little real happiness.”

“I don’t think I am insensitive or cruel. I laugh, I have a sense of humor,” Alice Roosevelt Longworth said of herself in an interview a decade before her death, “I like to tease…Isn’t it strange how that upsets people? And I don’t mind what I do unless I’m injuring someone in some way.”

After a double mastectomy and health problems throughout her 80s, she died at age 96 on February 20, 1980.

Upon her death, President Carter’s official statement said, “She had style, she had grace, and she had a sense of humor that kept generations of political newcomers to Washington wondering which was worse—to be skewered by her wit or to be ignored by her.”

After this look at the unbridled adventures of Alice Roosevelt Longworth, read up on these five absurd times Theodore Roosevelt cheated death. Then, check out another impressive woman, militant suffragette Emmeline Pankhurst.