The fossilized feces unearthed a mere 1.7 miles from Stonehenge is shedding new light on the seasonal feasts conducted by its builders 4,000 to 5,000 years ago. 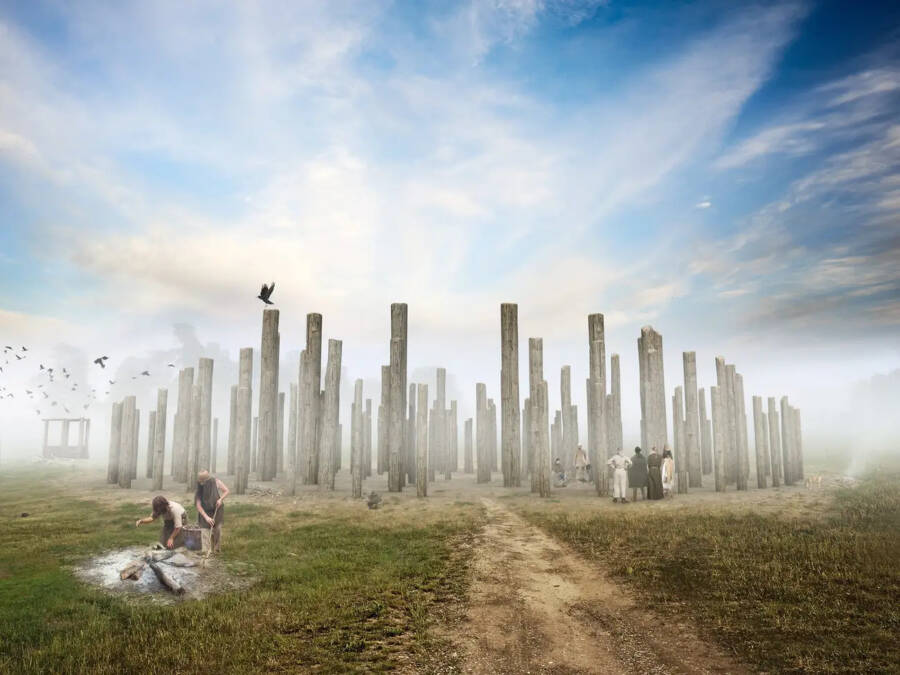 The Stonehenge monument in Wiltshire, England, annually draws more than a million visitors. The Neolithic solar calendar was built with multi-ton freestanding stones and remains a landmark to behold. While its founders are long dead, researchers just unearthed their feces — and found it was full of parasitic worm eggs.

Scientists from the University of Cambridge found the fossilized clumps of feces (or coprolites) in a refuse heap at Durrington Walls. According to LiveScience, this Neolithic settlement 1.7 miles from Stonehenge was home to its builders and their dogs. Evidently, both had eaten tainted animal meat during winter feasts.

As published in the Parasitology journal, the study centered on 19 coprolite samples from humans and dogs. Five of them contained the eggs of an unknown capillariid worm — which grows inside the organs of animals such as monkeys, rodents, pigs, sheep, and cows. For lead author Piers Mitchell, the find is unprecedented. 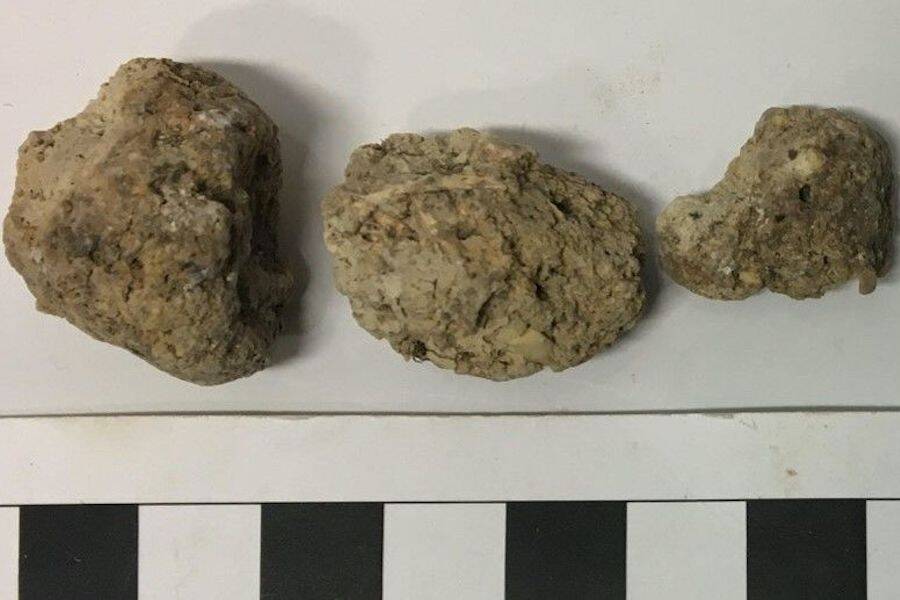 ParasitologyThree of the prehistoric coprolites.

Stonehenge was built 4,000 to 5,000 years ago and continues to mystify. It was constructed in alignment with the summer solstice sunrise. Some believe it helped mark the changing seasons, while the litany of human remains unearthed at the site suggests it was also an ancient burial ground.

Mitchell was ultimately more interested in the diet of its founders, however. The village of Durrington Walls was settled around 2500 B.C.E. when Stonehenge was being built, making the discovery of fossilized poop and prehistoric parasite eggs invaluable. And the organisms in question were rather insidious, CNN reported.

The eggs were initially identified as those of capillariid worms by their lemon shape, and further research detailed their survival methods. First, an animal accidentally ingests these eggs in the wild. The eggs then reproduce while attaching themselves to the internal organs such as the lungs, liver, and intestines.

When the hatchling worms burst out and emerge, they begin to feast upon those organs. When the animal host is inevitably eaten by a larger predator, the eggs linger inside the predator’s digestive tract and wait to be naturally excreted into the environment — only for another hungry and unfortunate host to ingest them. 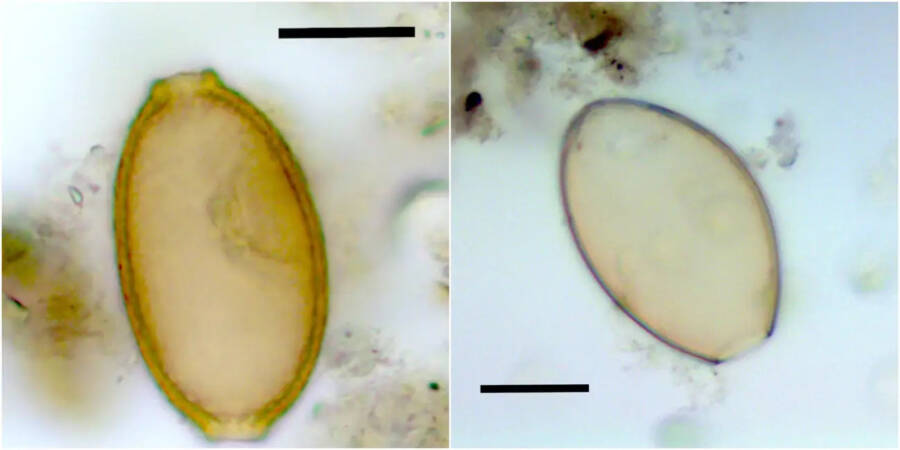 Mitchell believes these worms were unwittingly eaten by Stonehenge’s builders during popular winter feasts. While it’s unclear what kind of meat dishes were served, the leftovers were clearly shared with their dogs. This study is now the oldest evidence of parasitic worms in Britain that can be traced to their original source.

“They didn’t seem to live there continuously,” said Mitchell. “They lived in southern Britain, they farmed crops in the summer. And then they came to Durrington Walls in the winter to not only put Stonehenge together but also to hold religious festivals there.”

“The type of parasites we found are compatible with previous evidence for winter feasting on animals during the building of Stonehenge.”

Modern humans are infected by two capillariid species: Capillaria hepatica and Capillaria philippinensis. Victims of capillariasis disease have their internal organs eaten and die if the condition is left untreated. Fortunately for Stonehenge’s builders, these eggs passed through their digestive tracts like in animal hosts. 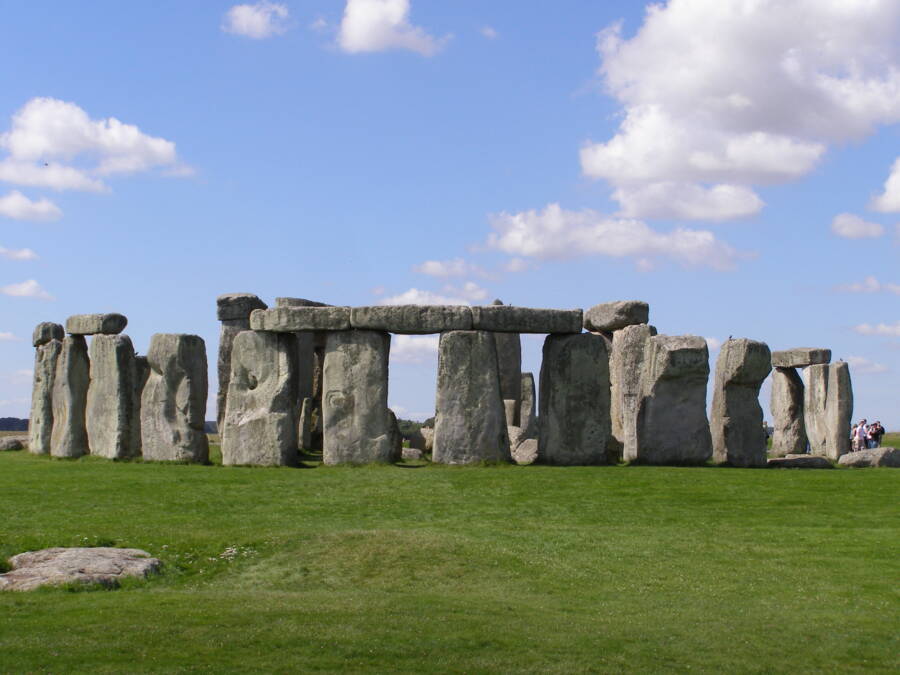 The researchers suggested these builders ate the eggs by mistaking offal for meat and undercooking it in clay pots. Previous research has indeed shown that Stonehenge’s founders herded cattle from 62 miles away and slaughtered these cows for their feasts.

“This new evidence tells us something new about the people who came here for winter feasts during the construction of Stonehenge,” said Mike Parker Peterson, co-author and archaeologist at University College London. “Pork and beef were spit-roasted or boiled in clay pots, but it looks as if the offal wasn’t always so well cooked

Ultimately, the producers of these now-fossilized clumps of feces appeared to have been lucky. They not only ingested parasitic worms that typically attach to and devour internal organs, but survived that incident without knowing — and helped construct one of the most staggering monuments in human history.

After reading about the ancient feces found at Stonehenge, learn why polar explorer Jørgen Brønlund ate his own feces. Then, read about the Toxoplasmosa gondii cat parasite that alters the human mind.