Emmeline Pankhurst: The Suffragette Who Used Militant Tactics To Win Women The Vote

In a time when the women's suffrage movement relied on patience and polite speeches, Emmeline Pankhurst paved her own path with action.

“I incite this meeting into rebellion.” With those words, British activist Emmeline Pankhurst changed the way that the suffragette movement conducted itself.

The suffragette movement is often conjured with images of peaceful protests, handmade signs, and groups of women marching in the streets. It doesn’t usually call to mind militant tactics and physical acts of defiance, but that’s exactly what Emmeline Pankhurst encouraged. 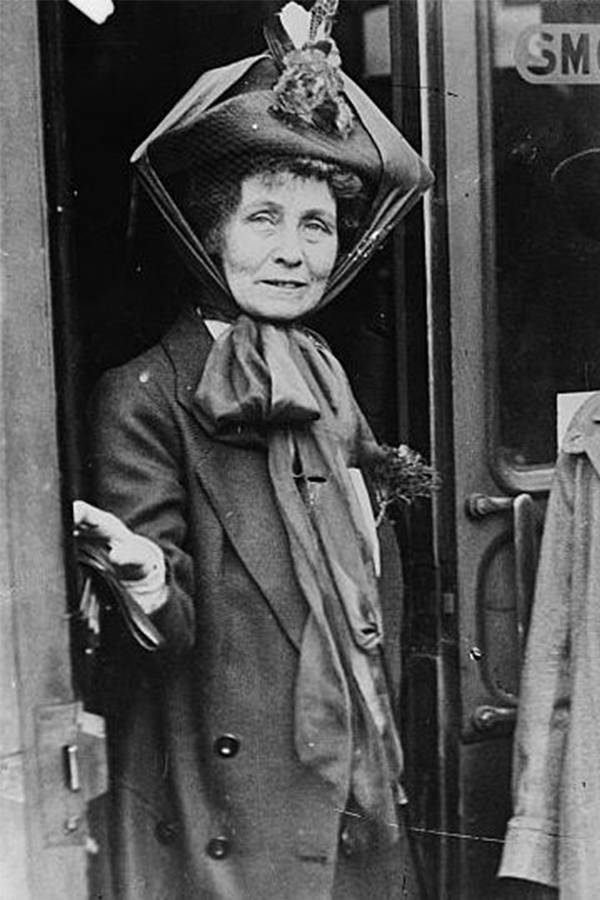 Wikimedia CommonsEmmeline Pankhurst was born into a family of political activists — her fate as a suffragette was outlined from day one.

From the moment she was born, Emmeline Pankhurst, née Goulden, was the master of her own story and wrote it as one wrought with political unrest. Though her official birth certificate stated that she was born in Manchester, England on July 15, 1858, Pankhurst would claim her entire life that she was actually born on July 14, Bastille Day, and connected herself with the female revolutionaries who stormed the Bastille.

“I have always thought that the fact that I was born on that day had some kind of influence over my life,” Pankhurst remembered later. She believed that her connection to these women was what drove her to the militant leader she became.

But activism was in Pankhurst’s blood already. Her mother, Sophia, was of a long line of political activists and usurpers, and her father was a well-known supporter of equal rights for all. He was a friend of American abolitionist Henry Ward Beecher, whose sister Harriet Beecher Stowe wrote the acclaimed Uncle Tom’s Cabin.

In fact, when Pankhurst was a child, Sophia Goulden used Uncle Tom’s Cabin as bedtime reading for her children. Inspired by the novel, young Emmeline began her career in activism by collecting donations for freed slaves.

Being so involved in this activism led Pankhurst to meet her future husband, Richard Pankhurst.

All In The Family 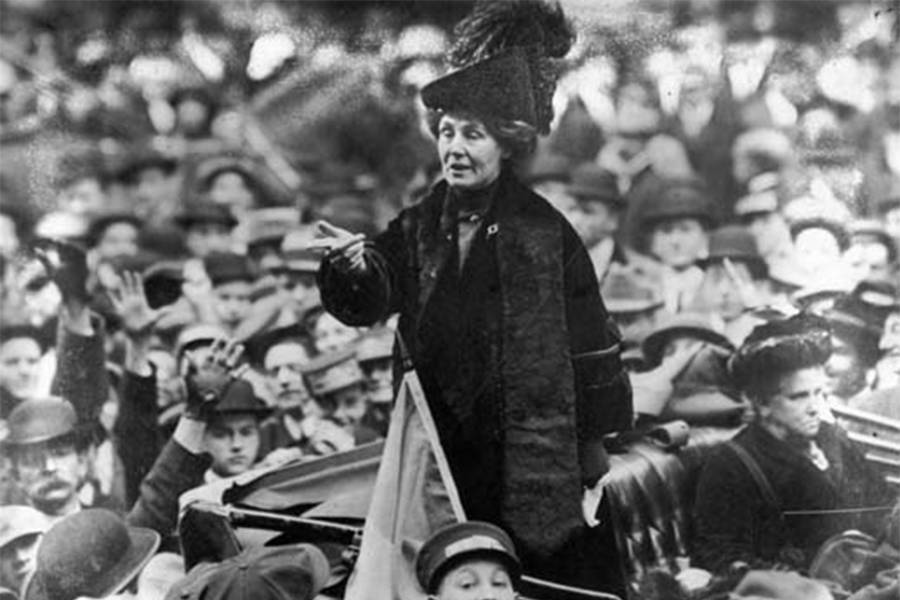 Wikimedia CommonsEmmeline Pankhurst giving a speech at a political rally.

Richard was a barrister who had a long history of advocacy himself. He campaigned for women’s rights along with freedom of speech and education reform. Though Richard was 24 years her senior, Emmeline found herself falling in love with him and with his political leanings.

As staunch a supporter of equality as Emmeline was herself, Richard was even more so. When Emmeline proposed the subject of a “free union” to avoid the legal trouble of marriage, Richard refused on the grounds that a free union did not allow her the same political freedoms as marriage did. He even drafted two Married Women’s Property Acts which allowed women to keep their assets from before and after marriage.

The two were wed legally on Dec. 18, 1879, and though Pankhurst gave birth to five children during their marriage, her husband never expected her to be a conventional housewife. While she tended to her husband and children fiercely, she devoted as much of her spare time as she could to her activism, and eventually brought the two together.

As her own mother had done, Pankhurst brought her daughters along to seminars and speeches with her in the hopes of instilling her values into them. This would prove fruitful, as Emmeline’s daughter, Christabel Pankhurst, would join her mother for 15 years of fighting for women’s rights.

In 1888, the Pankhurst family moved to Russell Square, an upper middle-class district in London. There, they cultivated a sort of headquarters for the radical thinkers and great minds of the day. Throughout their time there they hosted such guests as the American abolitionist William Lloyd Garrison, activist Annie Besant, anarchist Louise Michel, and Indian Prime Minister Dadabhai Naoroji. 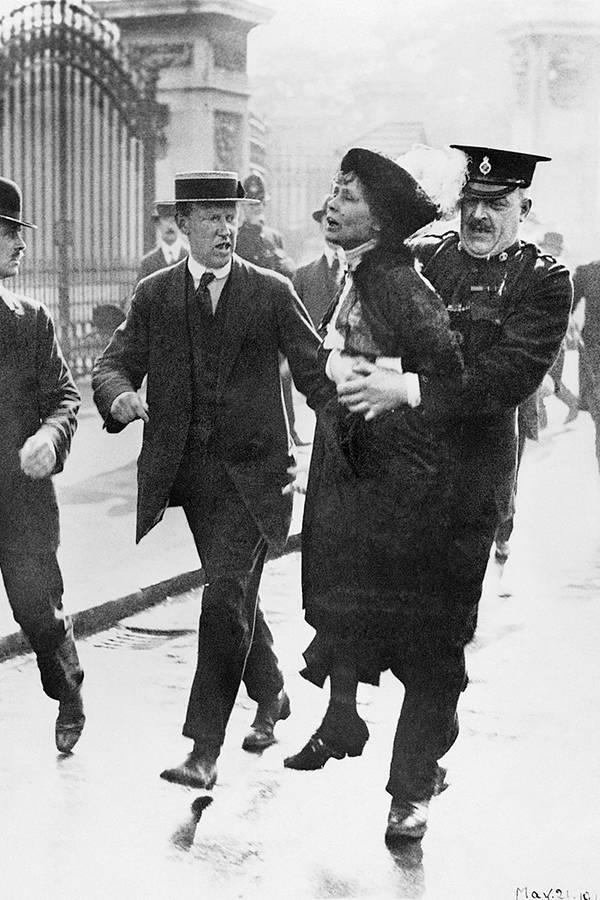 Wikimedia CommonsEmmeline Pankhurst being removed from a protest for her militant actions.

The same year that the Pankhurst’s moved to Russell Square, Britain’s first nationwide coalition advocating for the women’s rights to vote split up. The former National Society for Women’s Suffrage split into a more traditional faction known as the Great College Street Society, and a more radical one, known as the Parliament Street Society (PSS).

Emmeline Pankhurst immediately aligned herself with the radical PSS, hoping that their “new rules” approach to women’s rights would successfully secure all women the right to vote.

Emmeline Pankhurst resolved to make her own league, then. After distancing herself from the PSS, she created her own coalition of women, dedicated to securing the right for all women, married or not, to vote. In 1889, the first ever meeting of the Women’s Franchise League (WFL) was held.

The group also set themselves apart by their actions. While other groups worked off of peace and moderation, the WFL worked through action.

“Deeds, not words, has to be our permanent motto,” Pankhurst said of her attitude towards social activism. Indeed, the WFL would reflect that attitude. 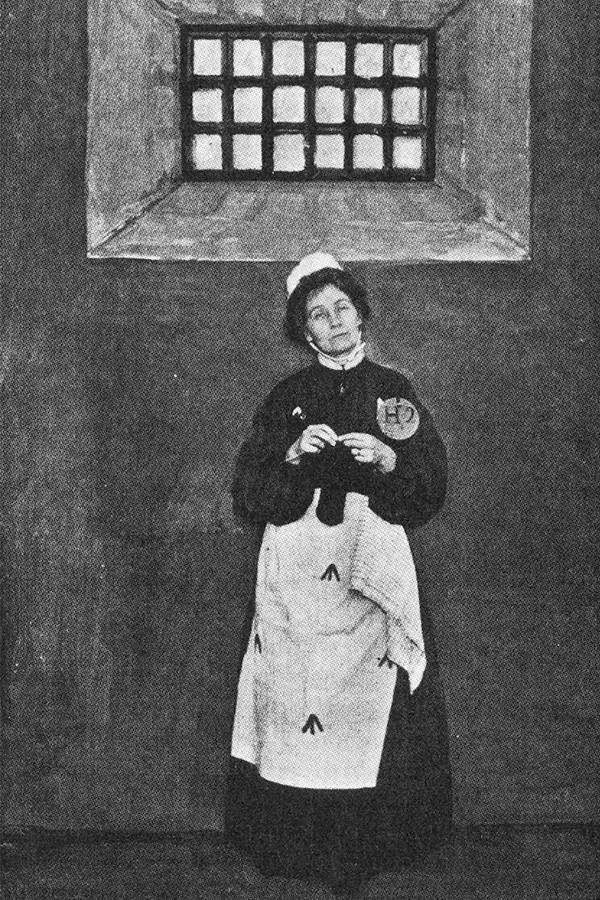 Wikimedia CommonsPankhurst in prison after one of her arrests.

At first, the WFL’s “deeds” were peaceful, nonviolent ones.

The group regularly hosted rallies, petitioned for signatures, and published literature on their cause. However, their reputation for radicalism caused many members to defect for fear of being seen as a usurper. The group was dissolved but a year later.

Emmeline Pankhurst subsequently joined another party — the Independent Labour Party. Though she was initially denied admission into the local branch because she was a woman, she was able to join the national branch and begin her activism on a national scale.

In December 1894 she was elected to the position of Poor Law Guardian, which required she oversee the conditions at a local shelter. There, she experienced how the nations poorest were living and was disturbed by it that she later claimed this influenced her decision to become a “militant” activist.

“These poor, unprotected mothers and their babies I am sure were potent factors in my education as a militant,” she wrote in her autobiography My Own Story.

Meanwhile, Emmeline’s actions within the ILP had landed her in some legal troubles which put a financial and mental burden on her husband. The family relocated to the country in an attempt to heal him but it was of no use. While on vacation with her daughter, Christabel, in 1898 Emmeline came upon a newspaper announcing her husband’s death.

Emmeline was forced to resign from her volunteer position as a Poor Law Guardian and instead procured work at the Registrar of Births and Deaths in Chorlton. Meanwhile, her children grew into their own with her daughter Christabel following in her activist footsteps.

In October of 1903, Pankhurst and several colleagues formed the Women’s Social and Political Union (WSPU), a more action-prone organization. While they were active without violence, they quickly realized that direct actions sometimes required violent actions.

In 1905, a bill advocating for women’s suffrage was filibustered. The WSPU made their ire over the filibustering known by inciting a large, loud, protest outside the Parliament building. The protest was so disruptive that the police eventually had to intervene and forced members of the WSPU out of the streets.

Though the protest ultimately failed in getting the bill passed, Emmeline Pankhurst proclaimed the protest — and the police’s intervention — a glowing success as it was one of the group’s first steps towards recognition.

“We are at last recognized as a political party,” she said. “We are now in the swim of politics, and are a political force.” 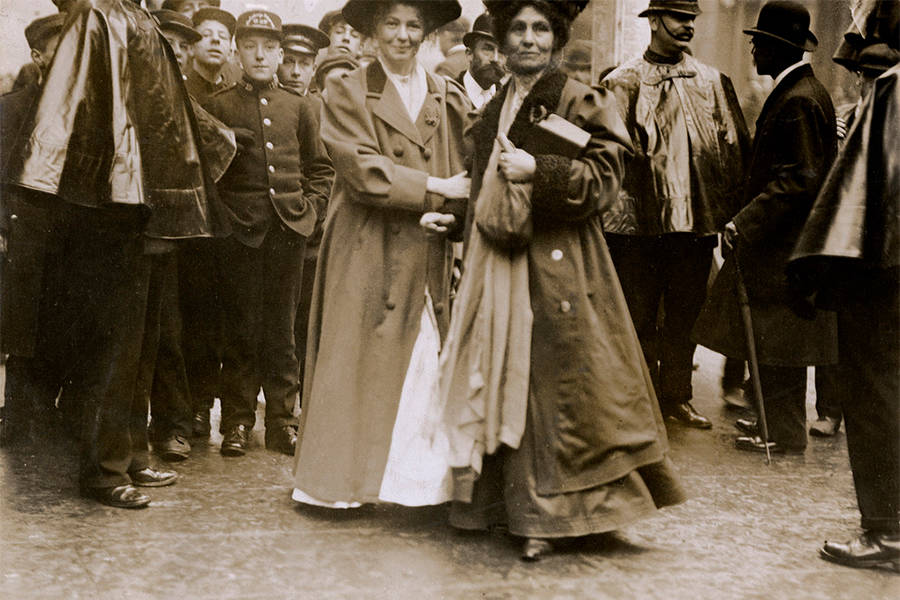 Flickr CommonsEmmeline and her daughter Christabel at a rally.

The WSPU’s reputation as a militant group was not overstated. Following their first protest, the group grew, and more of their protests popped up across the city. By 1908, the group had hundreds of thousands of followers — in June of that year, 500,000 activists turned up at a rally in Hyde Park to support Emmeline Pankhurst and her vision.

The large numbers of activists looking for something to fight for should have been exactly what Pankhurst wanted, but the numbers turned out to be more destructive than persuasive. Frustrated members ended up taking matters into their own hands after police shut down protests and hurled rocks at the Prime Minister’s windows and blocked streets in front of Parliament.

The group was fond of arson which was often directed by Christabel from Paris, where she had gone to avoid arrest for conspiracy.

“If men use explosives and bombs for their own purpose they call it war,” wrote Christabel in 1913, “Why should a woman not make use of the same weapons as men. It is not only war we have declared. We are fighting for a revolution!”

Christabel organized a nationwide bombing and arson campaign that was labeled the ‘Suffragette Outrages.’

Before long, Pankhurst herself was imprisoned for leading a hunger strike. The women of the WSPU were arrested and then released before their incarceration in order to get well, by which time they were imprisoned. Pankhurst was released and rearrested 12 times within the year and served a total of about 30 days.

These activities pushed major players to defect from the group, including two of Emmeline’s own daughters. Coupled with the impending World War I, by 1915 Pankhurst let the effort fall to the wayside.

However, Emmeline Pankhurst never gave up. During the war, she continued to host rallies and political lectures. She traveled to Russia in the hopes of convincing the Russian Prime Minister to change his ways. By the time she returned to England after the war, she was happy to learn that the suffrage movement hadn’t been crushed by the economic downturn.

The 1918 Representation of the People Act gave women their first big step toward total freedom, as it allowed women over the age of 30 to vote in elections, albeit with some restrictions. Pankhurst though, considered it a victory for women, restrictions or not. 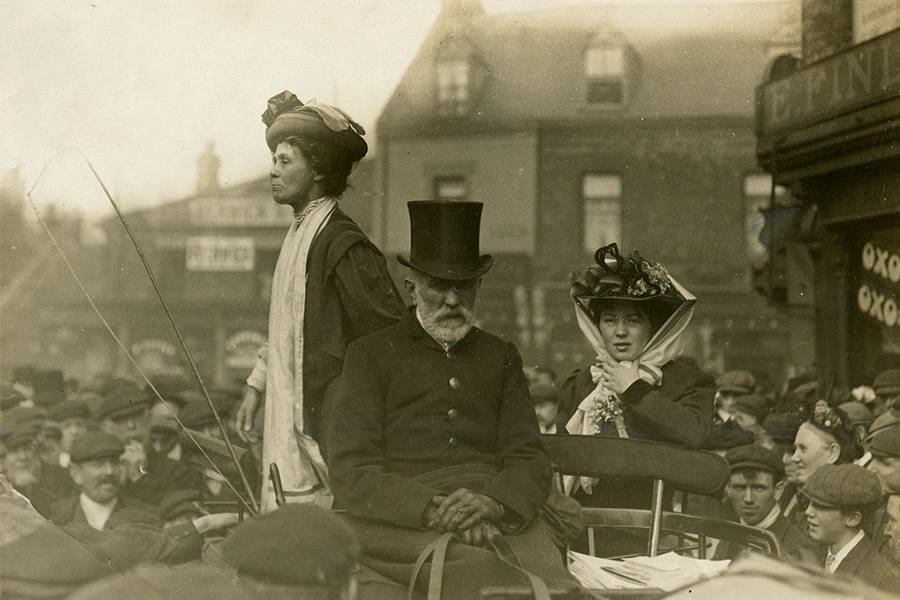 Flickr CommonsEmmeline Pankhurst standing on the back of a wagon giving a speech at a rally.

Though Parliament had begun to step in the right direction, Emmeline Pankhurst continued to campaign for women. She fought for a woman’s right to run for office and traveled to North America to spread her political activism. Eventually, she herself ran for office and tried for a seat in Parliament with the Conservative party — a move which surprised many.

Though the once window-smashing, protest-marching activist had become far more docile in her later years, her beliefs hadn’t changed. Pankhurst fell ill and was sent to a nursing home at age 69. She died shortly after she entered, on June 14, 1928. Her death was international news.

Until the day she died Emmeline Pankhurst remained a staunch supporter of equal rights, not just for women, but for humans everywhere.

After learning about the militance of suffragette Emmeline Pankhurst, check out some of history’s most empowering speeches given by women. Then, read about the Kurdish women who are fighting back against ISIS.