Aaron Burr And Alexander Hamilton: The Men Behind The Myths

Aaron Burr is considered one of American history's biggest villains -- but is that how we should remember him?

A performance of the hit Broadway show Hamilton, a retelling of Alexander Hamilton’s life, ending with the duel in which he was killed by Aaron Burr. Theo Wargo/Getty Images

Ever since the musical Hamilton hit theaters last year, Aaron Burr and Alexander Hamilton’s infamous rivalry has enjoyed renewed popular interest. But what’s the true story behind two of America’s most controversial founding fathers — and is the popular villainization of Aaron Burr warranted?

The Fire Before The Duel 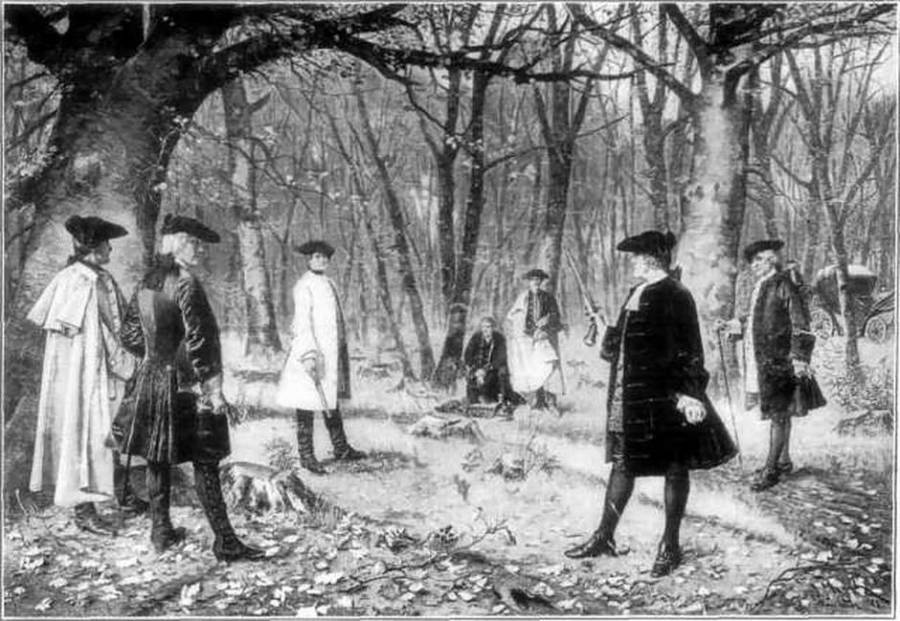 Alexander Hamilton, entrenched in a longstanding, bitter political and personal conflict with Aaron Burr, publicly defames his rival in a newspaper during 1804’s New York gubernatorial race, in which Burr, then vice president, is a candidate.

Finally — after more allegations are made about Hamilton’s denigration of Burr, for which Hamilton refuses to apologize — Burr challenges Hamilton to a duel. They travel to Weehawken, New Jersey, where they are less likely to be prosecuted for engaging in the outlawed practice.

Hamilton fires first, into the air — perhaps it’s a mistake, or perhaps he missed on purpose to avoid hitting Burr (there’s still some debate about his intentions, and in his “Statement on Impending Duel With Aaron Burr,” Hamilton says that he was “strongly opposed to the practice of Duelling.”).

Burr immediately returns fire and mortally wounds his opponent, who dies the next day.

Burr faces murder charges in both New York and New Jersey, but never goes to trial; with some help from his friends in the Senate, the charges are dropped and Burr finishes his term as vice president.

Aaron Burr And Alexander Hamilton: The Men Behind The Duel

Hamilton’s death came as a great loss for the fledgling country. As a former Secretary of the Treasury and founder of the Federalist party, Hamilton played an essential role in shaping the young country.

He founded the United States Coast Guard and the New York Post; he established the first national bank and friendly trade relations with Great Britain, and vehemently promoted the U.S. Constitution.

Still, his radical political beliefs — namely that the national government should have absolute power, and that presidents should serve for life — made him many enemies in high places, including fellow founding father Thomas Jefferson.

And that isn’t necessarily unwarranted. As modern economist Thomas DiLorenzo writes of Hamilton’s political beliefs, Hamilton advocated for “a highly centralized state that was headed by a despotic chief executive.”

And yet, as the legend around the duel grew, history easily — and perhaps unfairly — cast Burr as the story’s villain.

As Nancy Isenberg, T. Harry Williams professor of history at Louisiana State University, points out in The Washington Post, Burr was just as a much a progressive hero as Hamilton, perhaps even more so.

Throughout his political career, Burr — who served as vice president, a Revolutionary War officer, and a lawyer — fought for more transparency in government and fairness in Senate elections.

Beyond that, Burr wanted to improve the country from the inside out, backing policies that funded improvements to the country’s roads and bridges, and founded the Manhattan Company, the first bank that Hamilton’s Federalist party didn’t control completely.

Likewise, while Hamilton’s Federalist party wanted to amend the Constitution to keep naturalized foreigners from running for office, Burr vouched for inclusion. As Isenberg recalls, while a member of the New York Assembly Burr once said, “America stood with open arms and presented an asylum to the oppressed of every nation. Shall we deprive these persons of an important right derived from so sacred a source as our Constitution?”

Burr was also a radical abolitionist: In 1784, while on the New York State Assembly, he (unsuccessfully) advocated for an amendment to the Constitution that would have put an end to slavery — 15 years before New York State would officially ban slavery, and over 80 years before the federal government got around to it.

He even admired Mary Wollstonecraft — the leading feminist thinker of the day — and hung a portrait of her in his dining room.

While many might think that it was Burr’s duel with Hamilton that spelled his demise and sealed his fate as one of U.S. history’s greatest — and most singular — villains, it was actually Thomas Jefferson who would ruin Burr’s reputation.

In 1807, three years after Burr killed Hamilton, President Jefferson charged him with treason. Before a jury even had a chance to hear the case against Burr, Jefferson told Congress that his guilt was “beyond question.”

Burr stood accused of trying to establish his own, independent country with the 40,000 acres of land he had leased from Spain. But the judge presiding over the trial, John Marshall, didn’t agree with Jefferson’s take on the situation.

There were no witnesses to Burr’s apparent treason, and he was quickly acquitted.

By the time the acquittal came, it was already too late. Jefferson had smeared his name — irrevocably so — and Burr retreated to Europe where he lived until 1812. He then came back to New York, where he practiced law in obscurity until his death in 1836.

Pop culture seems to have forgotten Aaron Burr, who is mainly — if not only — remembered these days as the man who shot Alexander Hamilton. In reality, his legacy is much richer than that, and the American people owe both him and Hamilton a debt for helping shape the country we call home today.