Photo Of The Day: An Animal Rescue Activist Saves An Orangutan From Deforestation In Indonesia 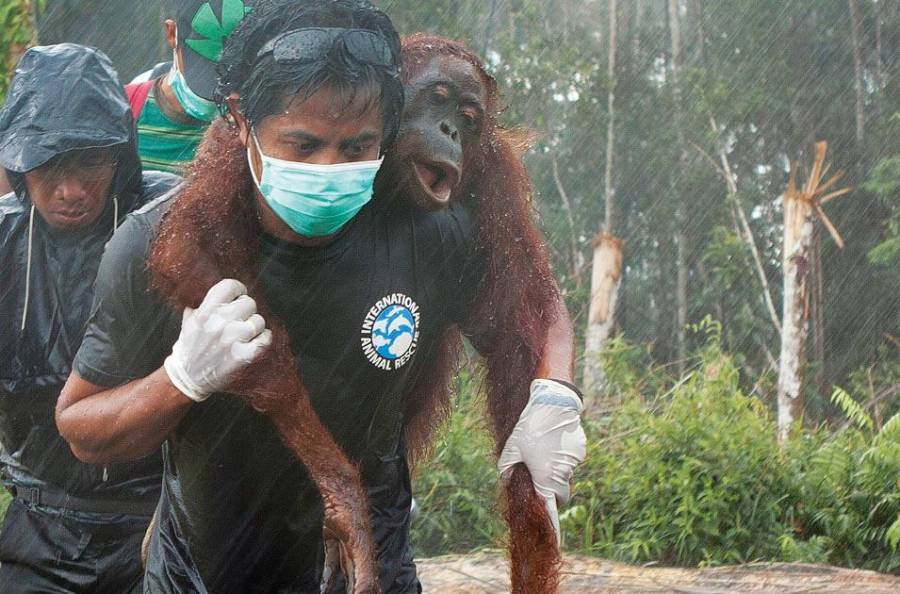 Orangutan populations are quickly diminishing in Indonesia and Malaysia.

This endangered species’ habitats on tropical islands like Borneo and Sumatra are threatened by commercial logging, mining, and deforestation for pulp and paper. Furthermore, according to Michelle Desilets, executive director of the Orangutan Land Trust, “the conversion of forest for oil palm is the single greatest threat to [their] survival in the wild.”

Palm oil–which is found in cookies, soap, doughnuts, and even cosmetics like lipstick–is in incredibly high demand as the most widely used vegetable oil in the world, igniting many palm oil companies to exploit areas where the oil is found at any cost.

Indonesia and Malaysia are not only home to the large red apes, but they account for 85% of the world’s palm oil production. The global demand for the oil has resulted in massive forest destruction throughout the two countries, especially in Indonesia where palm oil is the country’s third largest export and the most valuable agricultural product.

Many palm oil plantations face criticism from environmentalists who work endlessly to increase public pressure on the palm oil industry. Ian Singleton, director of the Sumatran Orangutan Conservation Program, and his team rescue orangutans displaced by palm oil plantations, or orphaned orangutans whose families were killed so they could be illegally kept as pets by humans. Singleton’s program releases most of the apes back into the wild in much safer forests.

“There are more orangutans in the tiny remaining patches of forest in the plantation, along with other protected species such as proboscis monkeys. All of the animals on the plantation are threatened. The company must stop clearing the forest immediately.

With fewer than 7,000 orangutans believed to be living in the Sumatran wilds, environmentalists hasten their pace in rescuing the endangered apes.

“The definition of a refugee is someone whose homeland is no longer available to them, and that’s exactly the case with these orangutans,” says Singleton.”These are the survivors of this annihilation of the forest, and everything that lives in it.”