Meet Adolphe Sax: The Badass Who Invented The Saxophone And Cheated Death 7 Times

No one thought Adolphe Sax would make it past childhood after his myriad near-death experiences. But he did — and invented an instrument that revolutionized the music world.

Hit on the head with a brick. Swallowed a needle. Drank sulfuric acid. Fell face-first on a searing skillet. These were just a few near-misses in the life of Adolphe Sax, an incredibly accident-prone child who was born in Belgium in 1814 and one of 11 children in his family to make it to puberty (barely).

Lucky for the world he did, because the Looney Tunes-esque clumsy boy would become the man to forever change the face of music, from the blues joints of New Orleans to the jazz clubs of Paris and the music of Kenny G: the inventor of the saxophone.

Born into a family of tradesmen, Antoine-Joseph or Adolphe Sax’s father was originally a carpenter. He was so gifted with wood, in fact, that he was tapped by William I of Orange, the ruling monarch of the region at the time, to create proper instruments for the Belgian military.

Sax the younger grew up in this musical environment in which he thrived. Jo Santy, of the Museum of Musical Instruments in Brussels, noted how a young Sax could use his father’s workshop to as his own and was making clarinets as young as 14 or 15. “He improved the instrument,” Santy continued, “changing the bore and exact locations of the holes, to make it sound better.”

A young Sax even hewed a clarinet and two flutes from ivory, a feat once considered impossible. Sax actually could reinvent the wheel, so to speak, and he produced clarinets, flutes, and trumpets that were leagues better than their predecessors.

In 1840, Sax proudly presented nine of his new works to the Belgian Exhibition, but due to his youth, was denied first prize.He was awarded a medal for his work, but Sax declined it, saying, “If they think me too young to deserve the gold medal, I myself think me too old to accept this vermeil one.” 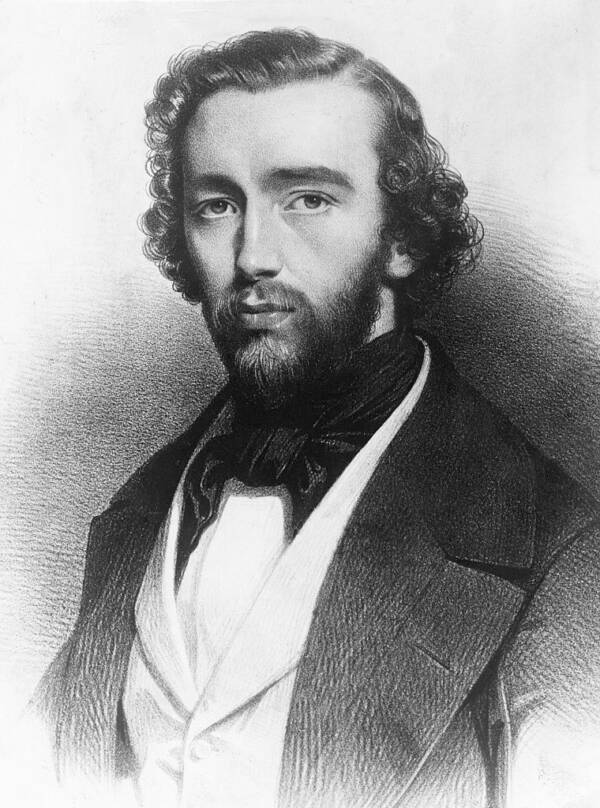 Wikimedia CommonsYoung Adolphe Sax proved as blundering as he was talented. Though he managed to handcraft instruments by 14, he also had a slew of close calls with death.

Sax flourished in the musical workshop but not without his own pitfalls. His childhood was riddled with a collection of near-fatal accidents.

For instance, he once thought a certain liquid to be milk and actually drank some diluted sulfuric acid. He was hit on the head by a stone, nearly drowned in a river, and poisoned three times by varnish. He also swallowed a needle and fell from a three-story window. There’s little wonder why his mother, nerves likely frayed, bemoaned: “He’s a child condemned to misfortune; he won’t live,” and that his nickname was “little Sax, the ghost”.

However improbably, young Sax did reach adulthood and lit out for Paris in the 1840s with 30 francs in his pocket after studying at the Brussels Conservatory. Les Misérables-era Paris was a heady place under King Louis Philippe. This was after the Revolution and Napoleon’s reign, both bloody, but there was money to be made from the army. “His aim was nothing short of introducing a whole new range of instruments to the French Army, which was, of course, a huge market,” Santy expounded. Sax set out to create an instrument perfect for use in military drills — but this time, for the French army.

Sax would come to craft a collection of eponymous saxhorns, including the saxhorn itself, the saxtromba, and the saxtuba. These instruments experimented with the sound of air released into a brass tube and each produced a different timbre. But even before these, Adolphe Sax had already struck his magnum opus: the saxophone.

In 1842, Sax became acquainted with Romantic composer Hector Berlioz who offered him entré into Paris’ musical circles. The two spoke at length about Sax’s inventions and that very night they met, the enigmatic composer told Sax, “Tomorrow, you will know what I think about the work you have accomplished.” Sax found out in the June 1842 edition of the Journal des Débats.

Berlioz celebrated his creation, which then was only called the bass horn, writing:

“Its principal merit in my view is the varied beauty of its accent, sometimes serious, sometimes calm, sometimes impassioned, dreamy or melancholic, or vague, like the weakened echo of an echo, like the indistinct plaintiff moans of the breeze in the woods and, even better, like the mysterious vibrations of a bell, long after it has been struck; there does not exist another musical instrument that I know of that possesses this strange resonance, which is situated at the edge of silence.”

The composer was the first to refer the instrument as the “saxophone.”

Wanting to combine the subtle beauty of the woodwinds he grew up on, with the flexibility of strings, Sax had created an entirely new instrument with two sizes, the sopranino or little saxophone and the larger subcontrabass saxophone. The instrument blended woodwinds with brass. It could achieve bluesy notes and even imitate the melancholy notes of stringed instruments thanks to its unique architecture.

The saxophone was a musical marvel that Time Magazine later called the “perennial Cinderella of serious music.”

“I shall wait another year before registering this patent,” Sax said fearing plagiarism. “We shall see whether, by then, a maker will have produced a true saxophone!”

With these brassy beauties, Sax hoped to revolutionize the orchestral world as it was.

The Man Who Invented The Saxophone Sings The Blues

But not first without splitting it. 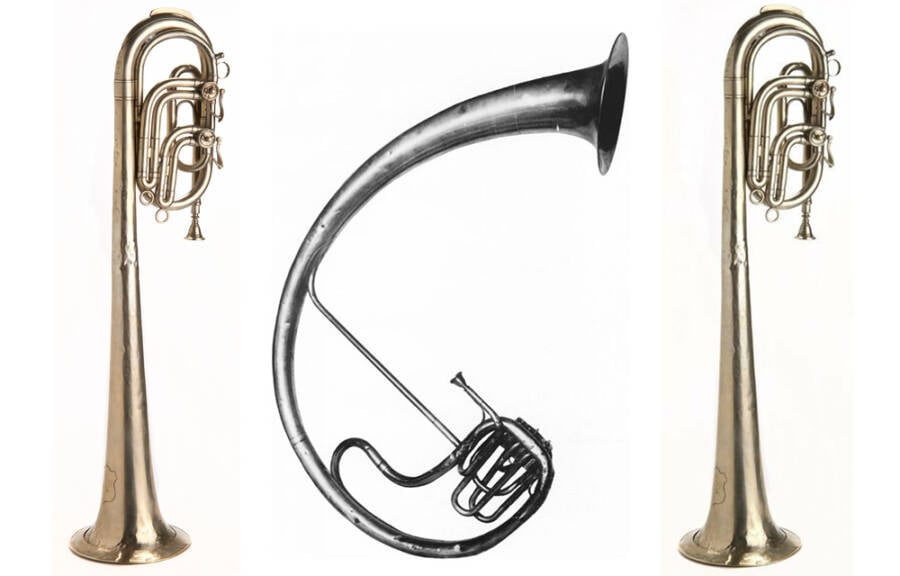 The saxophone and its maker were not appreciated in their time. After he patented the saxophone in 1846, pirated versions were reintroduced in France, netting Sax nothing. The inventor was also known for his difficult personality. Santy remarked “with Adolphe Sax, he was so controversial you were either for him or against him. This dangerous, dynamic, prolific Belgian who had arrived in Paris split up the musical world in France between pros and cons.”

Highly ambitious and creative, the man who invented the saxophone’s improvements on the classic instruments of yore ruffled the feathers of more traditional musicians. As such, the saxophone did not, as Sax had dreamt, make it into the orchestras of his time.

Clubs formed against him. The press produced unflattering articles. Sax’s avid litigiousness caught up with him and drained his coffers. Sax declared bankrupt three times in 1852, 1873 and 1877.

There were those who supported his vision, however. He sold around 20,000 saxophones between 1843 and 1860 out of his workshop, and Berlioz would come to his defense, writing, “Again and again, Sax is the victim of persecutions worthy of the Middle Ages…With a little more audacity, they would have murdered him. Such is the hatred that inventors always waken amongst those of their rivals that do not invent anything.”

The instrument as we know would come to represent an entire genre of music decades later but before that could happen, the inventor of the saxophone would die penniless on Feb. 7, 1894. He never married but did have five children with his companion Louise-Adèle Maor. One of his sons, Adolphe-Edouard, continued crafting saxophones in his father’s workshop. In 1928, that workshop was taken over by the Paris firm of Selmer. 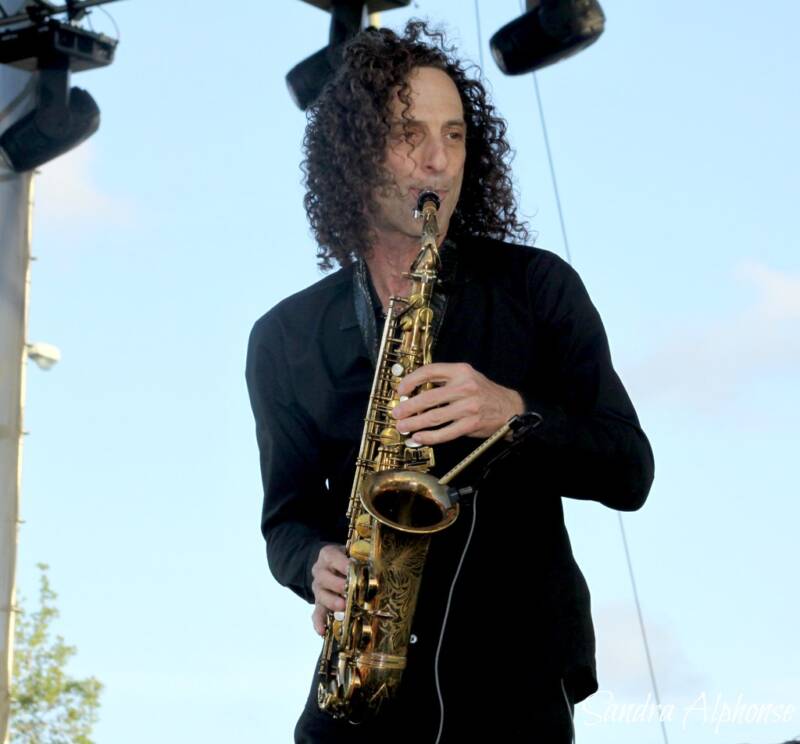 The man who invented the saxophone is remembered for many things: his confidence, his orneriness, but most of all, by his namesake. The saxophone forever changed music, becoming the enfant terrible of jazz and blues and an unmissable part of orchestras and jazz bands.

Not bad, for a man that seemed doomed to die in childhood.

After this look at the man who invented the saxophone, check out more musical history with the story of the troubled lives of America’s blind bluesmen or the stories of musicians whose legacies could face a #MeToo reckoning.