Plane Crash Captured On Video From Inside Cabin

A passenger who survived the wreck captured three minutes of video footage on his iPhone as the plane went down. The passenger, who was sitting by the plane’s left wing, recorded flames shooting out of the wing as the engine started to stammer.

Another passenger in the background can be heard saying, “Make sure you’re strapped in,” while the woman next to the man recording asks, “Why are we shaking like this?”

The small plane had 19 people on board: the two Australian pilots, three Dutch, and 14 South Africans.

The fiery plane can be seen getting closer and closer to the tops of trees and buildings before hitting the ground. The screen goes black for about 30 seconds, during which time there are audible moans of pain.

“Everybody out!” someone shouts in English repeatedly.

The plane crashed shortly after takeoff in a dairy factory just slightly east of the airport after the plane’s engine failed.

There was smoke coming out of the plane as it took off from the Wonderboom Airport runway, which was captured in earlier eyewitness footage. 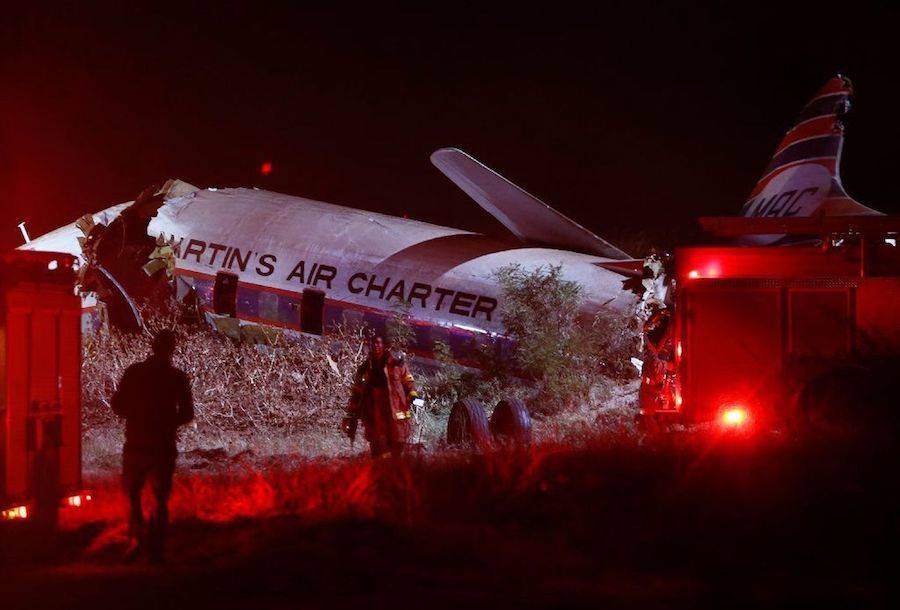 AFPRescue officials at the scene of the crash.

South African Civil Aviation Authority (SACAA) officials are in the process of a full-scale investigation into what happened.

The first victim was a South African named Chris Barnard. Described as an experienced flight engineer, he died at the scene.

Pilots Douglas Haywood and Ross Kelly, both from Sydney, were taken to Johannesburg Hospital with serious injuries. A third critically injured passenger was taken to the hospital as well, but died later on.

“We can confirm that a second person has unfortunately died [at the hospital],” said Kabelo Ledwaba of the SACAA. “This was one of the people injured on the ground.”

Another the victim on the ground, 20-year-old farm worker Thabang Moloto, lost both his legs in the accident, reported local media.

The plane, a Convair CV-340 built in 1954, was meant to be a donation from the South African Tour company Rovos Rail Tours to an air museum in the Netherlands called the Aviodrome aviation museum.

It was due to be flown out the next day; the fatal crash was just a scenic flight.

The three technicians on board the flight were discharged from the hospital with minor injuries.

Rovos Rail put out a statement on July 16 that said the two pilots were “in induced comas, but stable,” and that the “prognosis is optimistic.”

In another statement the SACAA said they wished to point out that “investigations can vary in complexity and may at times take a significant time to complete.”

Next, read about how these divers recovered American remains at a World War II crash site. Then take a look at these 24 astounding Amelia Earhart facts.