In 2014, computer scientist and Google Executive Alan Eustace jumped from more than 135,000 feet above the Earth.

While free-falling at 10,000 feet, skydiver Alan Eustace pulled his parachute cord. Nothing happened. A backup cord also failed. Eustace didn’t panic. After all, he had three safety divers monitoring his descent over the Arizona desert. One of them floated over and engaged his parachute by tugging it.

But Eustace, a 56-year-old Google executive, wasn’t in the clear yet. Wearing a pressurized NASA-type suit that would protect him against the high altitudes, he couldn’t reach to control the direction of the chute.

He floated off course quickly, losing sight of his safety net – the other divers. He found the dial to depressurize his suit wasn’t working. At the mercy of the wind, he floated down and headed straight for a giant cactus.

As best he could by leaning his body, Eustace avoided the huge prickly plant. But that small victory was overshadowed by the fact that with his suit still pressurized, he lacked the dexterity to remove his helmet to breathe. His radio: also dead. The antenna had accidentally ripped off when he leaped from the aircraft.

With perhaps a couple hours of oxygen in the tank, all he could do was wait for others to find him. They did, an excruciatingly long 12 minutes later. Eustace was attempting the world’s highest skydive – not for fame, but to revolutionize high-altitude travel. But this beleaguered jump, this was only a practice round.

Eustace’s goal dive was infinitely more dangerous. He wanted to prove that survival at extreme altitudes was possible if you could carry everything you needed in a wearable system. He was preparing to skydive from the edge of space. 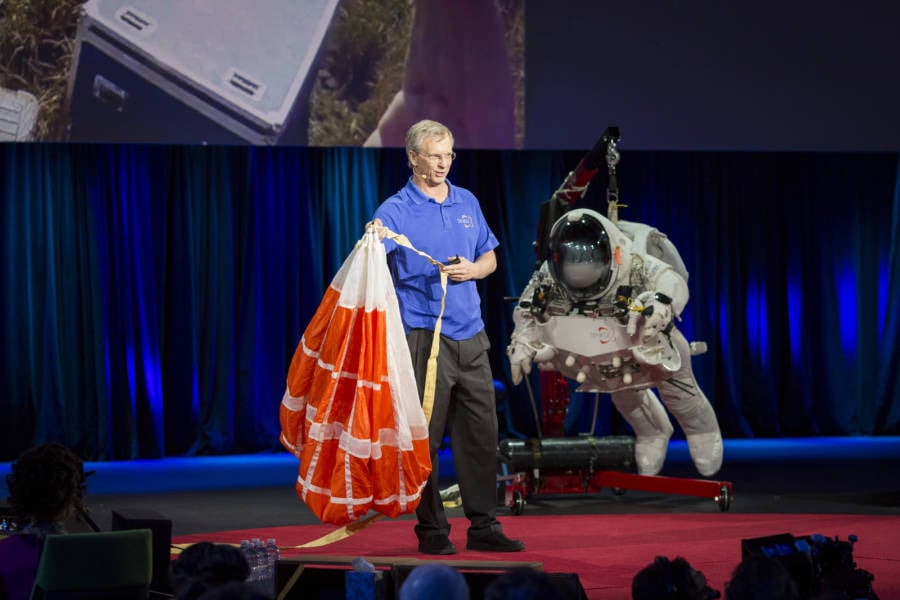 But how would a hobbyist skydiver go about this ridiculously high and death-defying dive? More importantly was the why: it was the ultimate engineering puzzle.

The more problems arose, the more excited Alan Eustace became. (He didn’t get the title of ‘Senior Vice President of Knowledge’ at Google by chance.) Sitting on the cusp of his retirement, he was willing to risk his own life to prove his theory.

A healthy dose of competition didn’t hurt. Professional skydiver Felix Baumgartner was also attempting to break the skydiving altitude record – which was a 102,800-foot drop completed in 1960 by Joseph Kittinger, an air force colonel and command pilot. 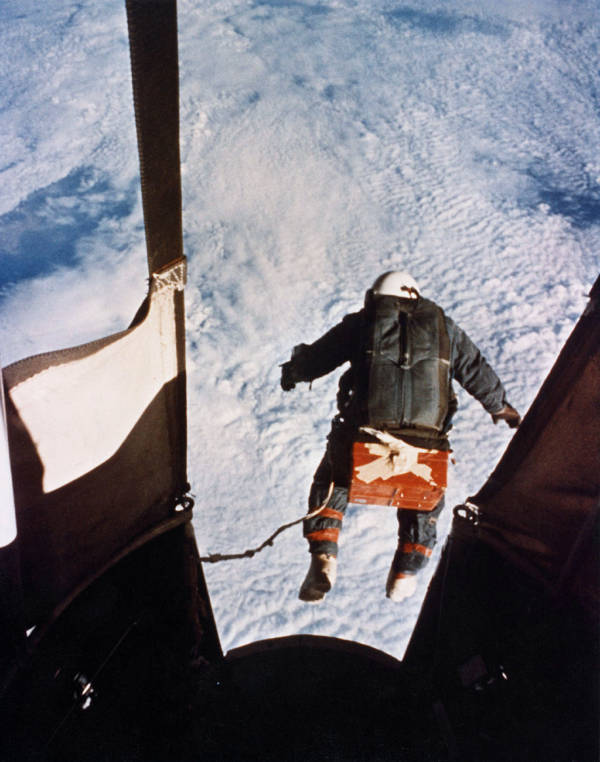 Baumgartner had a huge sponsorship deal with the energy-drink company Red Bull and had broken several other jumping and diving records in the world of extreme sports. He completed this highly publicized jump in 2012, breaking Kittinger’s record. But Eustace was watching – and gathering the information on how to do it better.

“One of the most amazing things we learned was how to bring somebody back from that altitude,” said Taber MacCallum of Paragon Space Development and Eustace’s team member. “In skydiving, you control your movements with your arms.” Even the experienced Baumgardner had issues. So Eustace’s team of 20 people overcame this by engineering a stabilization device.

Smithsonian’s Air and Space magazine describes the parachute device as a “… drogue (that) deploys at the end of a 10-foot boom made of flexible plastic, which unspools at the time of balloon release and instantly becomes rigid and super-strong.” And apparently, it made all the difference.

So on October 24, 2014, Eustace found himself being attached to a massive helium balloon roughly the size of a football field. His team released the balloon from its tether and up Alan Eustace went. He watched landmarks, and then entire states get small enough to disappear.

He floated up to 70,000 feet, where the sky became dark. At 80,000 feet, he saw the curve of the Earth appear. At 135,908 feet above sea level – which was as high as the balloon could go – ground control remotely detached Eustace from the balloon with a quiet snap.

He was in freefall for a full four minutes and 27 seconds. He hit 822 miles per hour – breaking the sound barrier. The sonic boom was heard from the ground.

Alan Eustace deployed his main chute and landed nine and a half minutes later without incident. He was back behind his desk at Google the next Monday, having achieved a monumental record with little fanfare. Just the way he wanted it.

Now that you’ve read about Alan Eustace and his record-breaking jump, learn about the the woman who dangled by only her teeth over Niagra Falls. Then, look at these 21 amazing photos of Earth taken from space.