Alferd Packer is the wild west's most famous cannibal, who attacked several of his fellow miners during a trip through the Rocky Mountains. 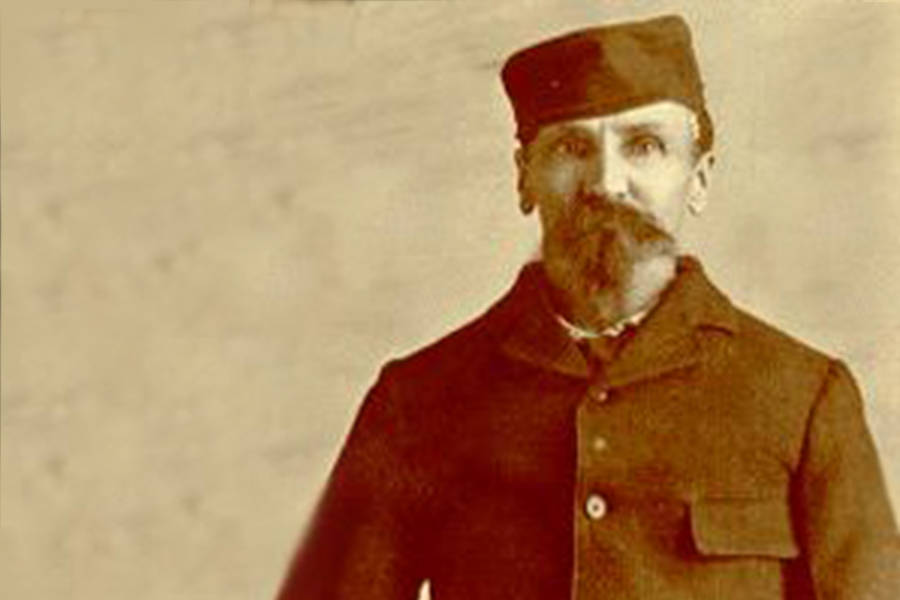 Wikimedia Commons
Alferd Packer in his military uniform, while serving before becoming a prospector.

On April 16, 1874, prospector Alferd Packer arrived at the Los Pinos Indian Agency in Gunnison, Colorado, broke, freezing, and most notably – alone. The five-man group with whom Packer had been traveling through the mountains were nowhere to be found. The last person to see them together had left them all alive and well, but it seemed that by the time Packer arrived at his destination, something sinister had happened.

As it turned out, Alferd Packer had killed and eaten them, claiming he had to in order to survive.

Six months prior to his arrival at the Los Pinos Indian Agency, Packer and a team of twenty other prospectors left Provo, Utah for Breckenridge, Colo., where the gold was plentiful and the prospecting good. On their way, they encountered Chief Ouray, a Native American chief whose tribe was known for showing kindness to the white prospectors who traveled through his lands.

Ouray warned the prospectors that they should hold off on continuing on their trek until spring, as the winter weather hit the mountains hard and makes traveling through the passes dangerous. He even offered up space at his camp for the men to stay until the winter was over.

Unfortunately, several of the prospectors were restless and unable to wait for the spring, anxious to get to their next camp. Three men snuck away from the camp, threatening Packer’s life when he attempted to follow them. Riled by the men’s dismissal of him, Packer formed his own group, convincing five men to follow him into the dangerous winter wilderness. 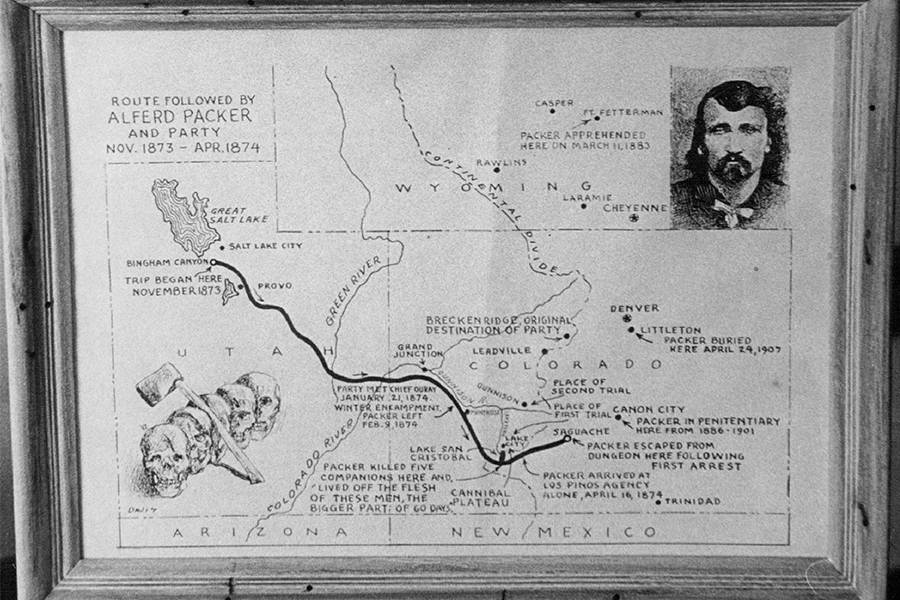 Denver Post Archives/Getty ImagesA map of the route taken by Alferd Packer and his companions.

A guide offered to take them as far as he could, but he had to turn back once the terrain got too rough for the horses. The guide was the last person to see the six men alive.

When asked about his men on that April night after his solo arrival at camp, Alferd Packer claimed they had abandoned him. He said that he had gotten his feet wet one night and had subsequently frozen, making him slower than the others. Unwilling to wait for him, he said they left him.

He also claimed to be broke, offering to sell the rifle he was carrying for a meager $10. Some of the other men who had made it to the Agency offered to take Packer up to Saguache, where he could buy supplies after he expressed a desire to return to his home in Pennsylvania.

On the way to Saguache, one of the men noticed that Alferd Packer was carrying a skinning knife, one he knew had belonged to a man named Frank Miller who had been one of the men Packer had been traveling with. Upon seeing the knife, he began to doubt Packer’s abandonment story, though he didn’t share his doubts with anyone.

However, the rest of the group was forming their own suspicions as well. Though Packer had claimed to be flat broke when he arrived at the Agency, upon getting to Saguache he spent roughly $200 and even offered to lend a saloon owner $300. 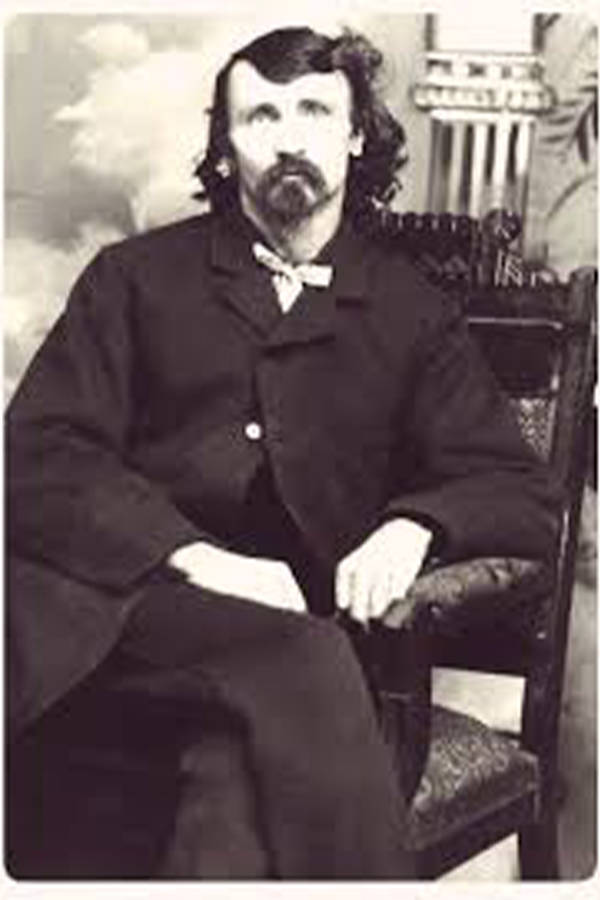 Public DomainAlferd Packer before his expedition.

At that point, the team accosted Parker, threatening to hang him for lying to them. General Adams, the head of the Los Pinos Indian Agency stepped in, arresting and interrogating him about his time in the wilderness. To his surprise, Packer signed a full confession, detailing what he’d done.

According to a biography of Alfred Packer, titled Maneater: The Life and Legend of an American Cannibal by Harold Schechter, Packer’s confession reads as such:

“Old Man Swan died first and was eaten by the other five persons about ten days out of camp. Four or five days afterwards Humphreys died and was also eaten; he had about one hundred and thirty three dollars ($133). I found the pocket book and took the money. Some time afterwards, while I was carrying wood, the butcher was killed—as the other two told me accidentally—and he was also eaten. Bell shot ‘California’ with Swan’s gun and I killed Bell. Shot him. I covered up the remains and took a large piece along. Then traveled fourteen days into the agency. Bell wanted to kill me with his rifle—struck a tree and broke his gun.”

Alferd Packer was then jailed in Saguache, though he soon escaped, as the jail cell was no more than a rudimentary log cabin.

Nine years later, Packer was discovered living under an alias in Wyoming, working with some of the original mining party he had left Utah with all those years ago. Upon being discovered, he signed a second confession, this time changing his story to make it sound like the men had killed each other while he had been out scouting. 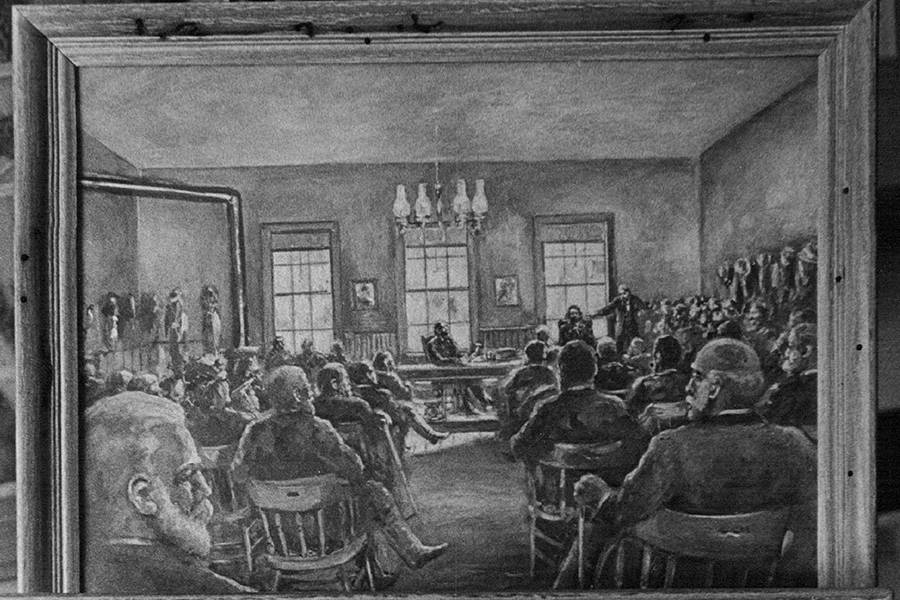 Given his conflicting stories, a trial was scheduled during which he was sentenced to death by hanging for premeditated murder. According to a local newspaper, the judge who handed down the sentence had some choice words for Alferd Packer:

“Stand up yah voracious man-eatin’ sonofabitch and receive yir sintince. When yah came to Hinsdale County, there was siven Dimmycrats. But you, yah et five of ’em, goddam yah. I sintince yah t’ be hanged by th’ neck ontil yer dead, dead, dead, as a warnin’ ag’in reducin’ th’ Dimmycratic populayshun of this county. Packer, you Republican cannibal, I would sintince ya ta hell but the statutes forbid it.”

Of course, court records reflect a much more eloquent sentencing from the judge, though with the same eventual outcome; that he would be hanged several months from the sentencing.

However, Alferd Packer never saw the gallows. His sentence was reversed by the Colorado Supreme Court in 1885 for being based on an ex post facto law, or a new law that retroactively changes the results of the law it replaces. As such, his charges were reduced to manslaughter and he was sentenced to 40 years in prison.

In 1901, he was paroled. Upon being released from prison, he went to work as a guard at the Denver Post, a job he held until his death. He died of dementia at the age of 65, after reportedly becoming a vegetarian.

Though Alferd Packer may be long gone, his gory legacy lives on. In 1996, a black comedy musical was released, aptly titled Cannibal! The Musical, that details the fateful adventure. Perhaps more fitting, however, is the naming of a building after him at the University of Colorado, Boulder — the dining hall, known as the “Alferd Packer Restaurant & Grill.”

After learning about Alferd Packer, check out another crazy cannibal, like Issei Sagawa, who walks as a free man in Tokyo. Then, read about what human flesh probably tastes like, according to actual cannibals.