22-year-old Otto Warmbier was sentenced to 15 years of hard labor for stealing a sign in North Korea. He was flown home this week in a coma. 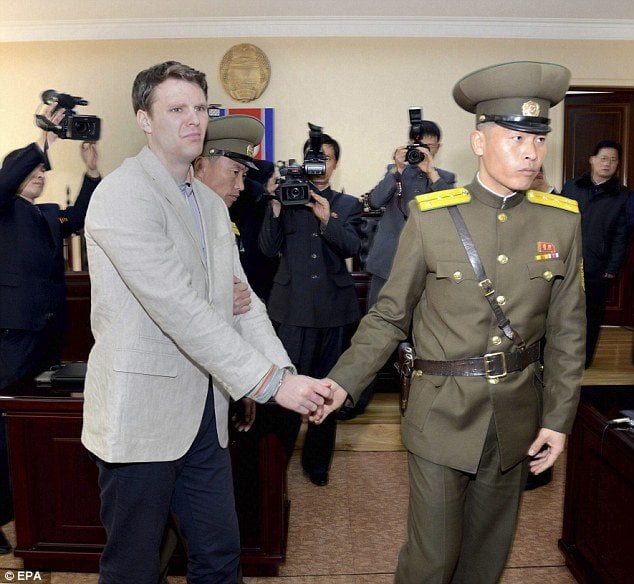 YouTubeOtto Warmbier on the day of his sentencing to 15 years of hard labor in North Korea.

Otto Warmbier, a 22-year-old University of Virginia student, was on his way to study abroad in Hong Kong when he joined a tour group to visit North Korea in 2015.

There, he was arrested for trying to steal an item bearing a propaganda slogan, and sentenced to 15 years of hard labor.

17 months later, Wambier is back in the US, but with severe brain damage leaving him in a state of “unresponsive wakefulness.”

Warmbier has apparently been in a coma since March 2016 — a fact that was unknown to his parents and US officials as they negotiated his return.

When he arrived in Cincinnati on a military medical plane, his parents were shocked.

Wambier, who had planned to graduate this past spring and start a job on Wall Street, now “shows no sign of understanding language, responding to verbal commands or awareness of his surrounding,” according to Dr. Daniel Kanter.

“There is no excuse for any civilized nation to have kept his condition secret and denied him top-notch medical care for so long,” Otto’s father, Fred Warmbier, said at a press conference.

The North Korean government claims they released Warmbier “on humanitarian grounds” — saying that he fell into the coma after contracting botulism and being given a sleeping pill.

Warmbier’s parents don’t buy this story, saying that their son had been “brutalized and terrorized.”

He suffered “extensive loss of brain tissue in all regions of the brain” and his body showed no signs of botulism.

Though some have wondered whether Warmbier’s condition and this apparent lie indicates violent treatment by the North Koreans, there is no evidence Warmbier suffered any broken bones or trauma.

The use of severe beatings would also be a sharp departure from how the government has treated American prisoners in the past. Out of the 18 or so Americans detained in North Korea over the last ten years, only one of them reported being beaten.

The rest were kept in harsh conditions and subjected to psychological abuse, but the regime has been very careful to keep them all alive.

“They were probably scared,” David Straub, a former State Department official who helped secure the release of two prisoners in 2009, speculated about why the North Koreans would keep Warmbier’s coma a secret. “The brain scan would have told them he was in serious condition.”

Aside from severely worsening an already tense relationship between America and North Korea, the revelations about Warmbier’s imprisonment have created a new urgency for the US government to negotiate the release of the three other Americans still being held in captivity.

In this mission, they have an unexpected hope: basketball star Dennis Rodman who, bizarrely, is friends with North Korean dictator Kim Jong-un.

“He’s the only person on the planet that has the uniqueness, the unbelievable privilege of being friends with President Trump and Marshal Kim Jong Un,” Rodman’s agent, Chris Volo, said of the former NBA player, who was also on The Celebrity Apprentice. “He’s going to try to bring peace between both nations.”

Could that effort include bringing the three imprisoned Americans back with him?

We’ll have to wait and see. In the meantime, he gave the “Supreme Leader” a copy of Trump’s The Art of the Deal. Maybe there’s a chapter on hostages?

Next, read about when North Korea said Trump’s stance on the Paris Agreement is the “height of egotism.” Then, see why Trump is warning of “major, major conflict” with North Korea.