"The surgical operation is the most complex I have ever seen in my 40 years of working with anthropological materials." 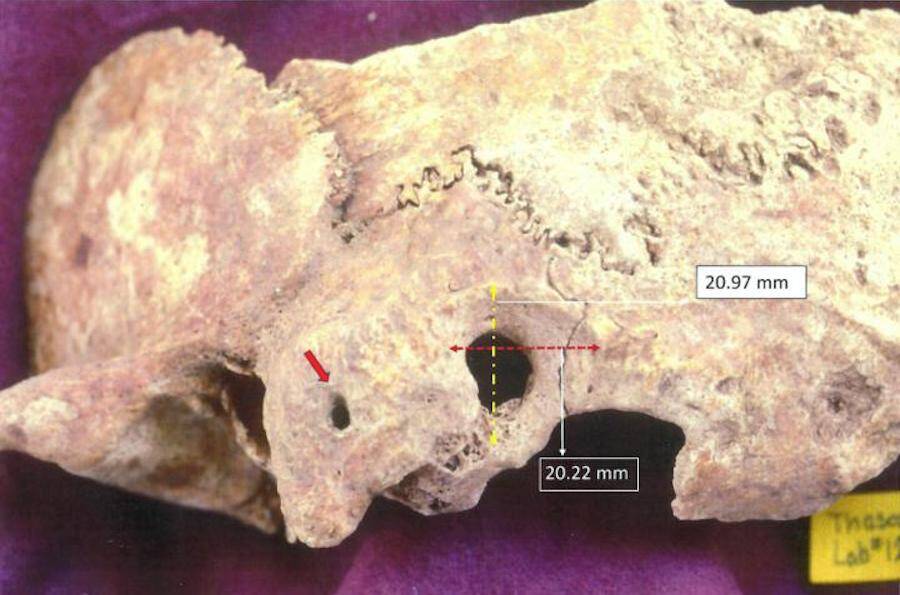 Anagnostis P. Agelarakis/Adelphi UniversityThis ectocranial view of the skull shows evidence of the rather precise surgery, with both red and yellow arrows indicating areas of approach.

Archaeologists on the Greek island of Thasos have uncovered 10 skeletal remains of mounted archer-lancers and their kin. These are the first forensically-assessed remains of this group from the Proto-Byzantine period — and one skull shows clear evidence of brain surgery.

According to Adelphi University via Phys, these skeletons come from the Eastern Roman Empire between the fourth and seventh century A.D. The remains belonged to four women and six men, who are believed to have been of high social standing.

The bones not only indicated that one underwent a remarkably advanced type of brain surgery, but they also show other injuries and physical activities. For Anthropologist Anagnostis Agelarakis, PhD, the bones show an astonishing level of medical expertise.

“The very serious trauma cases sustained by both males and females had been treated surgically or orthopedically by a very experienced physician/surgeon with great training in trauma care. We believe it to have been a military physician.”

Wikimedia CommonsThe Byzantine and Sassanid empires at the beginning of 7th century. The 10 individuals whose remains were discovered died at some point during this era.

“Even despite a grim prognosis, an extensive effort was given to this surgery for this male,” said Agelarakis. “So, it’s likely that he was a very important individual to the population at Paliokastro.”

Fortunately for modern-day researchers, technology allows for far greater insight than findings from only a few decades ago could’ve garnered. In this case, Agelarakis was able to gain medical, surgical, and paleopathological data from this “extraordinary head and neck surgery.”

This all-encompassing post-mortem indicated the cause for surgery stemmed from an infection, and the archer perished in the process of surgery, or soon after.

“The surgical operation is the most complex I have ever seen in my 40 years of working with anthropological materials,” said Agelarakis.

“It is unbelievable that it was carried out, with most complicated preparations for the intervention, and then the surgical operation itself which took place, of course, in a pre-antibiotic era.”

In 2019, another ancient Greek skull showing evidence of brain surgery was found in Turkey. Researchers believe that surgery was performed to treat a headache.

In addition to the medical care these individuals received, the location where they were laid to rest also points to high status in society.

“The burial place and architecture of the funerary monumental church and the construction of the graves is spectacular,” Agelarakis marveled. 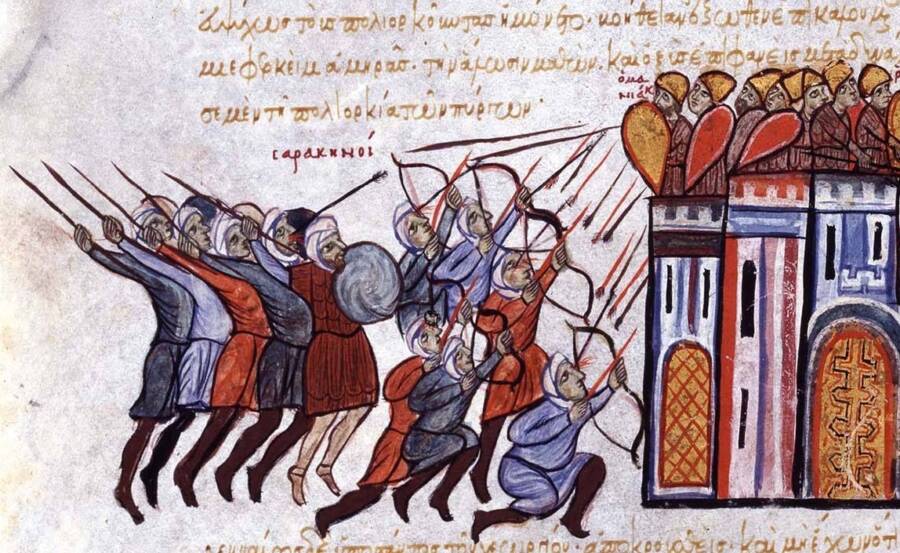 Wikimedia CommonsThough The Seizure of Edessa regards a later era, the ancient Greeks discovered in Thasos were archer-lancers comparable to those depicted here.

The experts are confident that this impressive preservation would only have been prioritized for invaluable members of this Proto-Byzantine Era community. Of course, even the elite seemed to have survived rather challenging hurdles of the time.

“According to the skeleton-anatomic features of the individuals, both men and women lived physically demanding lives,” said Agelarakis.

As for the traumatic injuries these individuals endured, the physical evidence also illuminated the contemporary quality of healthcare in the region. The treatment, evident from their bones, paints a surprisingly advanced picture of the skills their physicians might’ve had.

As such, this discovery not only sheds light on how a Proto-Byzantine community treated its cherished members but on the kind of medical skills they were able to employ.

In that sense, it clarifies a fascinating element of our own era — that we can find an ancient pile of bones and look back clearly through time.

After learning about the skeletal remains of 10 ancient Greeks and a complex form of brain surgery being discovered at Paliokastro, read about the five most important battles of the ancient Greek wars. Then, learn about the story of Hypatia, an ancient Greek intellectual killed for her beliefs.