Meet Andrea Ivanova, The 24-Year-Old Bulgarian Woman With The ‘Biggest Lips In The World’

Andrea Ivanova had her first round of lip injections in 2018 when she was 21 years old and proudly boasts of having the world's biggest lips while calling herself the "Balkan Barbie." 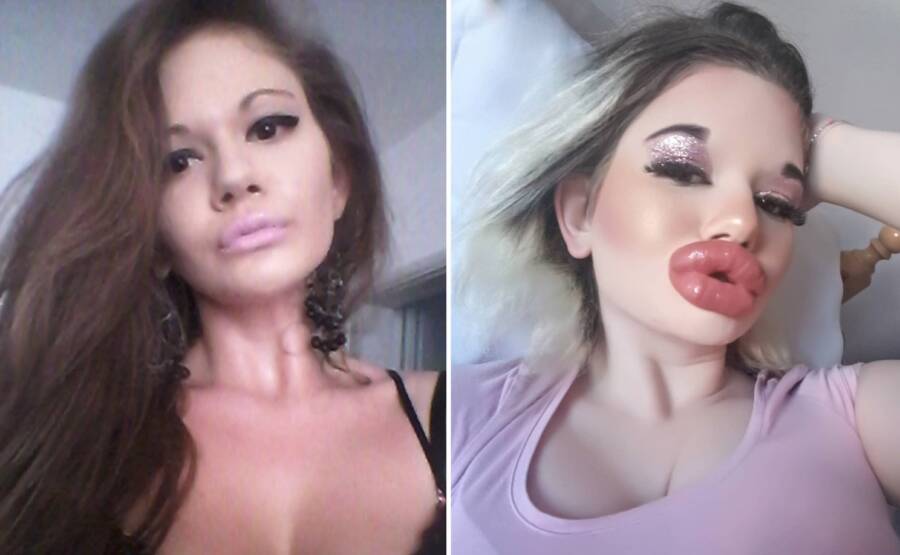 Andrea Ivanova is 24 years old and has spent most of her adult life fashioning herself into the “Balkan Barbie.” And with 26 lip injections, she boasts of having the “biggest lips in the world” — but she isn’t done yet.

Ivanova has spent thousands of dollars on these cosmetic body modifications. It’s only been three years since she embarked on her journey of physical enhancement, but she has already amassed a loyal legion of online supporters, some of whom regularly offer her money or invite her on free trips.

Although it’s her lips that have garnered the most attention, Andrea Ivanova has also had surgery to enhance her bust size and lengthen her face to change the shape of her chin and jawline. And she plans to have her 27th lip injection just in time for Christmas — with more surgeries on the horizon.

The Woman With The “Biggest Lips In The World”

Born in Sofia, Bulgaria, in 1997, Andrea Emilova Ivanova attended the St. Kliment Ohridski school at the University of Sofia. According to Yahoo News, she studied German philology while enrolled at the oldest institution of higher learning in the country — with a clear, primary interest in the development of language. 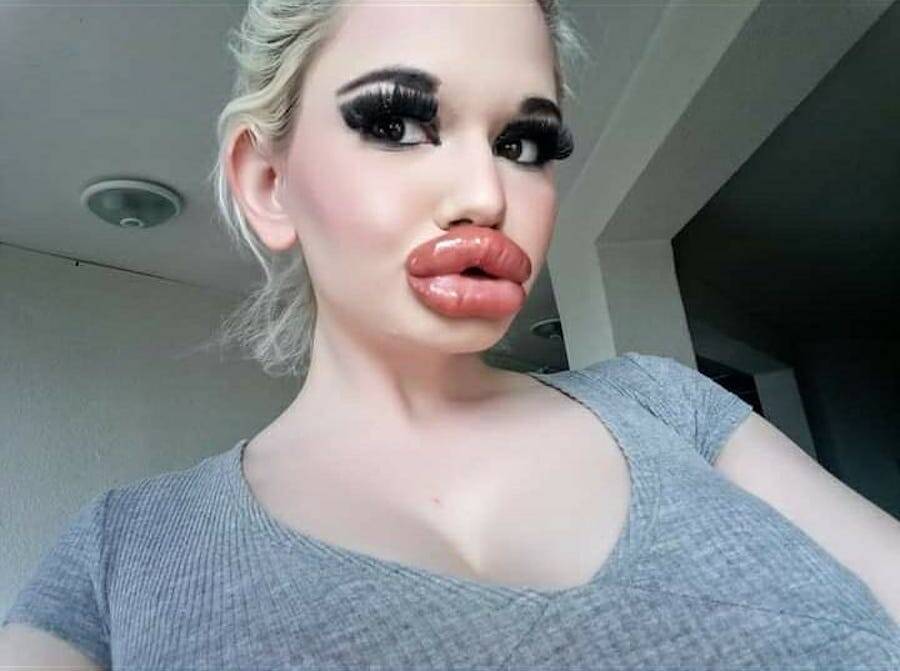 By the time she was 22 years old, however, body modification became a definite runner-up. She visited dozens of clinics before her first injection in 2018 to make sure she found the right one for her. And before 2019 was over, she had already gotten 15 lip injections and spent more than $2,500.

“I like my lips now, more than before and I feel very good and very happy with them because according to me, with bigger lips I look prettier,” she said.

Ivanova was adamant she wasn’t copying any celebrities regarding her aesthetic. She said that she always wanted to be noticed. Today, she boasts about having the “biggest lips in the world” in her online bios and has amassed more than 11,000 Instagram followers, plus thousands more on TikTok and OnlyFans.

“I’ve always wanted to be different, stand out from the crowd and be more eccentric. In addition to huge lips, I also have a silicone bust, 600 cubic meters of silicone on the breast, a total of 1,200 cubic meters. I also wear more makeup, I like heavy dark and glamorous makeup, artificial hair and large eyelashes,” Ivanova said.

How Andrea Ivanova Got The World’s Biggest Lips

Lip fillers are typically made of hyaluronic acid, which naturally occurs in various bodily tissues like the epidermis. While these injections aren’t particularly new, the trend has grown in recent years. These procedures are largely safe, though side effects such as infection or swelling can occur. 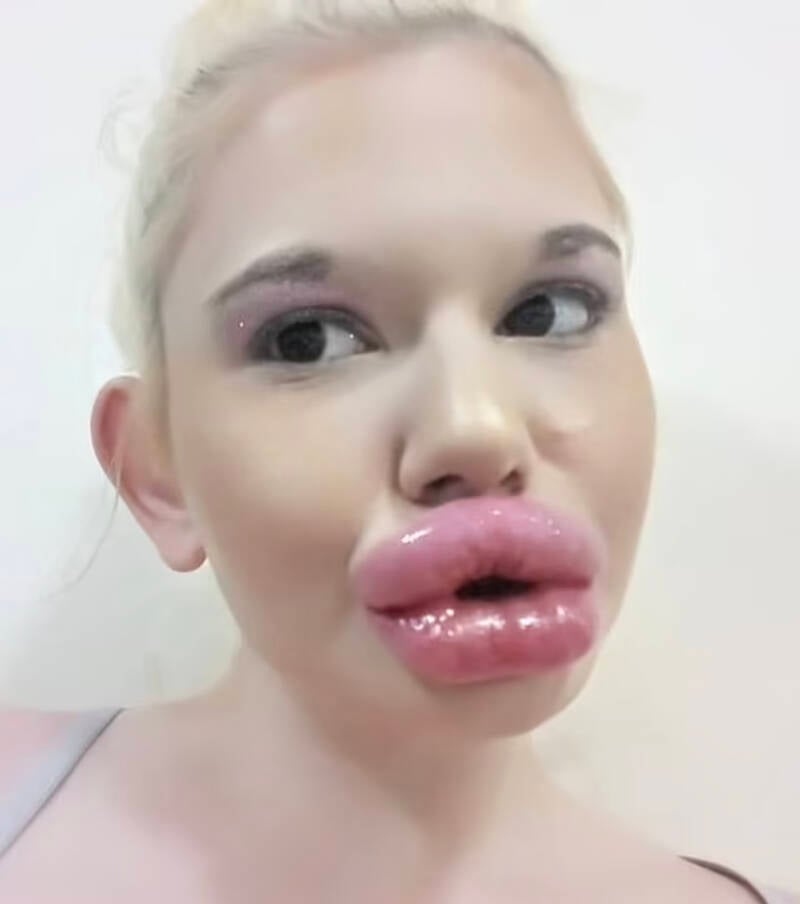 The dozens of filler injections have provided Andrea Ivanova with a confidence she said was always lacking. Despite each injection costing her $265 for a whopping total of $6,625, she’s not only planning her 27th filler appointment before year’s end but recently underwent the knife to alter her chin and jawline for $660.

“I like them a lot and feel much better with my lips,” she said. “Many men from all over the world write to me on my social media networks offering me money, trips and inviting me to meetings all the time.”

Unfortunately, Ivanovo’s family isn’t as pleased with these alterations as she is. Then there’s the swath of online trolls who criticize her look on social media and aggressively call for her to seek mental help. In the end, she isn’t worried about her lips bursting or any other side effects and primarily relishes the attention.

“Fantastic? I would love to be the man who has the honor to have wonderful dinner with you,” one commenter wrote. “Let me know…”

According to The New Zealand Herald, Ivanova has more than quadrupled the size of her lips in the last three years. Still, doctors have told her that future lip injections could be fatal, and they have advised her to pay close attention to any pain in her lips. 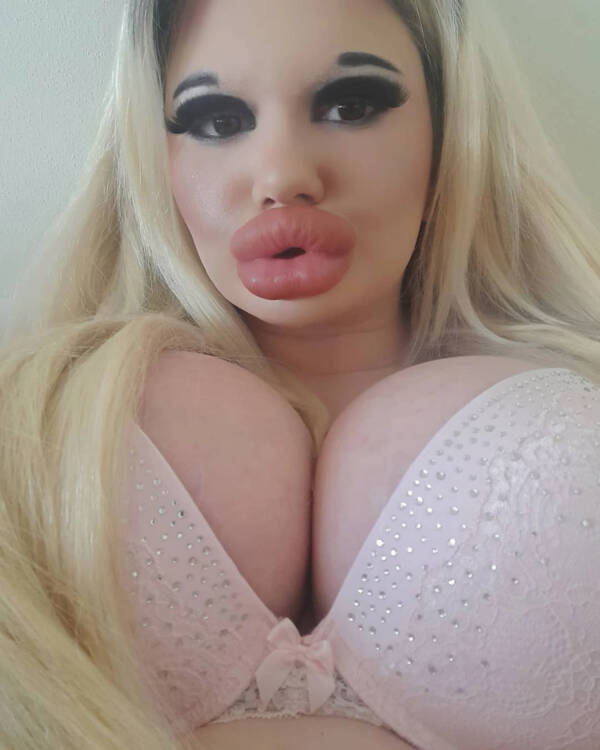 For now, however, Ivanova says the only adverse side effect she has had from the injections is difficulty eating in the few days following each injection. Beyond that, she says she’s in the clear as long as she keeps her lips moisturized.

And even though she says she receives as much criticism as she does support, it doesn’t bother her at all.

“I can’t give any indication of how big is too big, or can lips be too big, because for each person, ‘big,’ ‘bigger’ and ‘too big’ are different concepts,” she says.

After reading about the woman with the biggest lips in the world, learn about Valeria Lukyanova, the “human Barbie” who says she has only had one plastic surgery. Then, check out 24 before-and-after photos from the early days of plastic surgery.