Celebrity chef Anthony Bourdain was found dead at age 61 at Le Chambard Hotel in France on June 8, 2018. Tragically, his death was ruled a suicide by hanging. 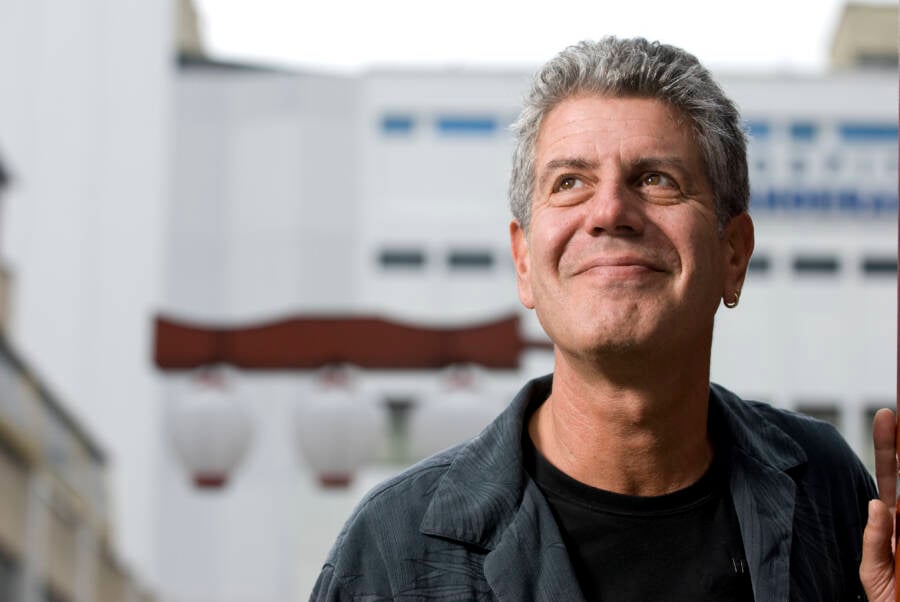 Paulo Fridman/Corbis/Getty ImagesWhen Anthony Bourdain died in 2018, he left a gaping hole in the culinary world.

From exposing the seedy underbelly of the restaurant industry to dining with President Obama in Vietnam, it’s no wonder why Anthony Bourdain was called the “original rock star” of the culinary world. Unlike other celebrity chefs, his appeal stretched far beyond the delicious food he cooked and ate. This made Anthony Bourdain’s death all the more tragic.

On June 8, 2018, Anthony Bourdain was found dead of an apparent suicide at Le Chambard Hotel in Kaysersberg-Vignoble, France. His body was discovered by fellow chef Éric Ripert, who had been filming an episode of Bourdain’s travel show Parts Unknown with him. Ripert became concerned when Bourdain missed dinner the night before and breakfast that morning.

Sadly, by the time Ripert found Bourdain in his hotel room, it was too late — America’s most beloved travel guide was already gone. Anthony Bourdain’s cause of death was later revealed to be suicide by hanging, and he had used a belt from his hotel bathrobe to end his life. He was 61 years old.

Despite his massive success, Bourdain had a troubled past. During his early years of working in restaurants, he had developed an addiction to heroin and other problems that he later said should have killed him when he was in his 20s. While Bourdain eventually recovered from his heroin addiction, he continued to struggle with his mental health throughout his life.

While it’s impossible to tell what was going through Bourdain’s mind during his final moments, there’s little doubt that his personal struggles played a role in his demise. While many were shocked by the suddenness of his death, others were not that surprised. But today, most who knew him simply miss their friend. And there’s a lot about him to miss.

The Incredible Life Of Anthony Bourdain 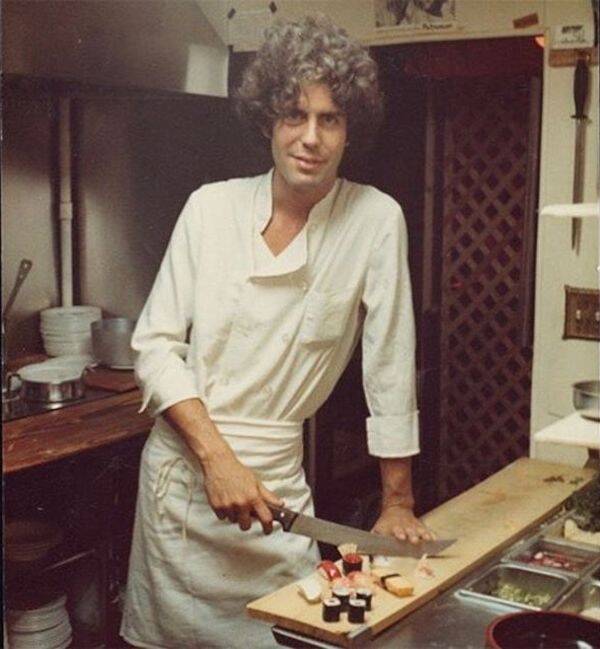 Anthony Michael Bourdain was born on June 25, 1956, in New York City, New York, but spent most of his youth in Leonia, New Jersey. As a teenager, Bourdain enjoyed going to the movies with friends and gathering at restaurant tables to discuss what they had seen for dessert.

Bourdain was inspired to enter the culinary world after he tried an oyster on a family vacation in France. Freshly caught by a fisherman, the tasty catch led Bourdain to work in seafood restaurants while attending Vassar College. He dropped out after two years, but he never abandoned the kitchen.

He attended the Culinary Institute of America, graduating in 1978. While most of his early jobs in restaurants involved tasks like dishwashing, he steadily moved up in the ranks of the kitchen. By 1998, Bourdain had become the executive chef at Brasserie Les Halles in New York City. Around this time, he was also chronicling his experiences in the “culinary underbelly.”

The future celebrity chef wrote candidly about his heroin addiction, as well as his use of LSD, psilocybin, and cocaine. But he wasn’t the only one who struggled with these vices while working in restaurants in the 1980s. As he later explained, “In America, the professional kitchen is the last refuge of the misfit. It’s a place for people with bad pasts to find a new family.” 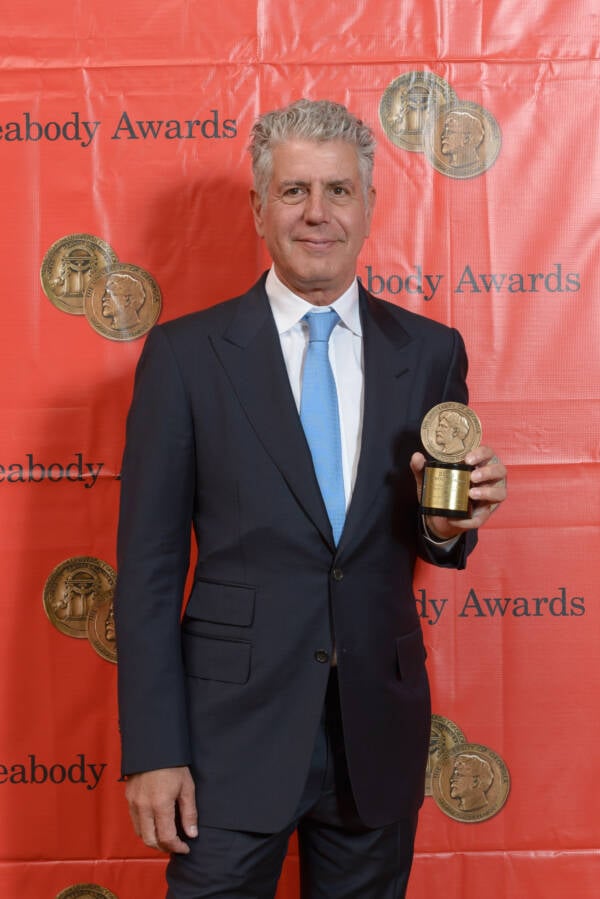 Wikimedia CommonsAnthony Bourdain was given a Peabody Award in 2013 for “expanding our palates and horizons in equal measure.”

In 1999, Bourdain’s writing made him famous. He published an eye-catching article in The New Yorker titled “Don’t Eat Before Reading This,” exposing some unsavory secrets of the culinary world. The article was such a hit that he expanded on it in 2000 with the book Kitchen Confidential.

Not only did his book become a bestseller, but he soon saw even more success with A Cook’s Tour. That book was turned into a TV series — which led to Bourdain’s world-famous No Reservations show in 2005.

Though Bourdain had found success in the literary world, he truly arrived when he went on TV. From No Reservations to the Peabody Award-winning series Parts Unknown, he explored culinary cultures all over the world as a humble tour guide to hidden pockets of life and food.

He had become the toast of the town as his honest depiction of people, culture, and cuisines found a global legion of fans. And as a former heroin addict, Bourdain inspired countless people with his remarkably honest story of recovery. But things were far from perfect in his world. 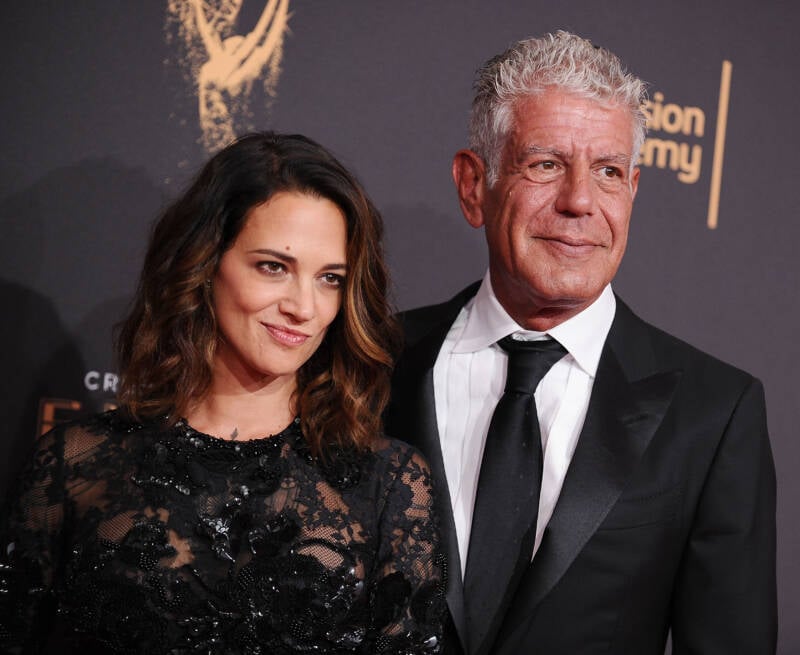 Jason LaVeris/FilmMagicAnthony Bourdain and his last girlfriend, Asia Argento, in 2017.

Just a couple of years before his suicide, Bourdain publicly visited a psychotherapist in Buenos Aires, Argentina on an episode of Parts Unknown. While this episode, like others, focused on unique dishes and fascinating people, it also showed a darker side to Bourdain’s relationship with food.

While talking to the psychotherapist, he confessed that something as small as eating a bad hamburger at the airport could send him into “a spiral of depression that can last for days.” He also expressed a desire to be “happier.”

It seemed like he was happier than ever when he first met Italian actress Asia Argento in 2017 while filming an episode of Parts Unknown in Rome. Though Bourdain’s first marriage had ended in divorce and his second in separation, he was clearly overjoyed to begin a new romance with Argento.

Still, he continued to struggle with his mental health. He often brought up death, wondering out loud how he would die and how he would kill himself if he decided to end his own life. In one of his last interviews, he said that he was going to “die in the saddle” — a sentiment that later proved chilling.

Despite his enviable career as a travel documentarian, he was haunted by darkness that he couldn’t seem to shake. This coupled with his rigorous schedule likely made him feel exhausted whenever the cameras were off. 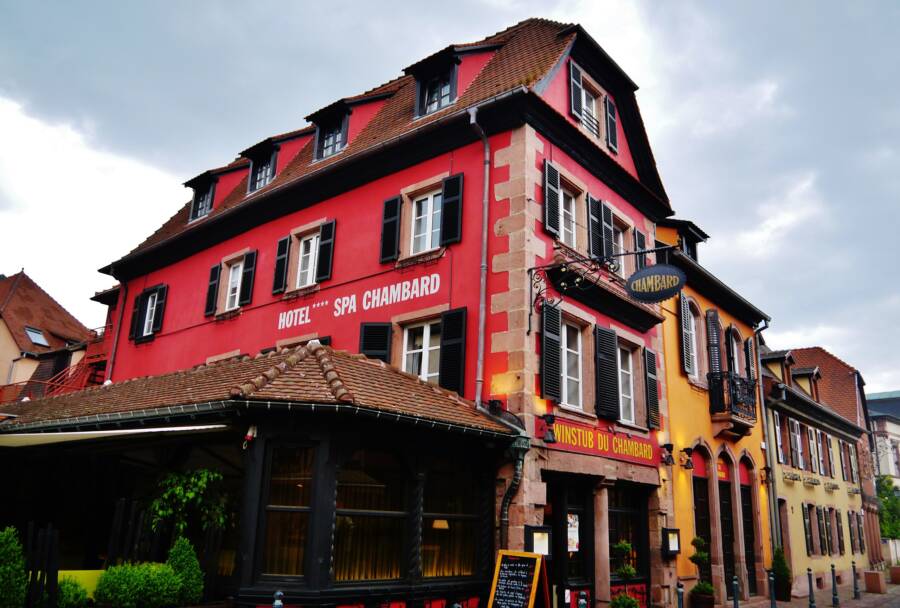 Five days before Bourdain’s death, paparazzi photos were released of Argento dancing with another man, French reporter Hugo Clément. While it was later reported that Bourdain and Argento were in an open relationship, some people speculated on how the photos had made Bourdain feel. But it’s impossible to say exactly what was going through his mind.

At 9:10 a.m. on June 8, 2018, Anthony Bourdain was found dead at Le Chambard Hotel in Kaysersberg-Vignoble, France. Tragically, Anthony Bourdain’s cause of death was soon revealed to be an apparent suicide. His friend Éric Ripert, with whom he had been filming Parts Unknown, was the one to discover the body hanging in the hotel room.

“Anthony was a dear friend,” Ripert later said. “He was an exceptional human being, so inspiring and generous. One of the great storytellers of our time who connected with so many. I wish him peace. My love and prayers are with his family, friends, and loved ones.”

For the prosecutor of Colmar, the city closest to the hotel, Anthony Bourdain’s cause of death was clear from the very beginning. “We have no reason to suspect foul play,” said Christian de Rocquigny. That said, it wasn’t immediately clear whether drugs played a role in the suicide.

But a couple of weeks later, Bourdain’s toxicology report showed no trace of any narcotics and only a trace of a non-narcotic medication. Experts noted that his suicide appeared to be an “impulsive act.”

The Aftermath Of A Legendary Chef’s Demise 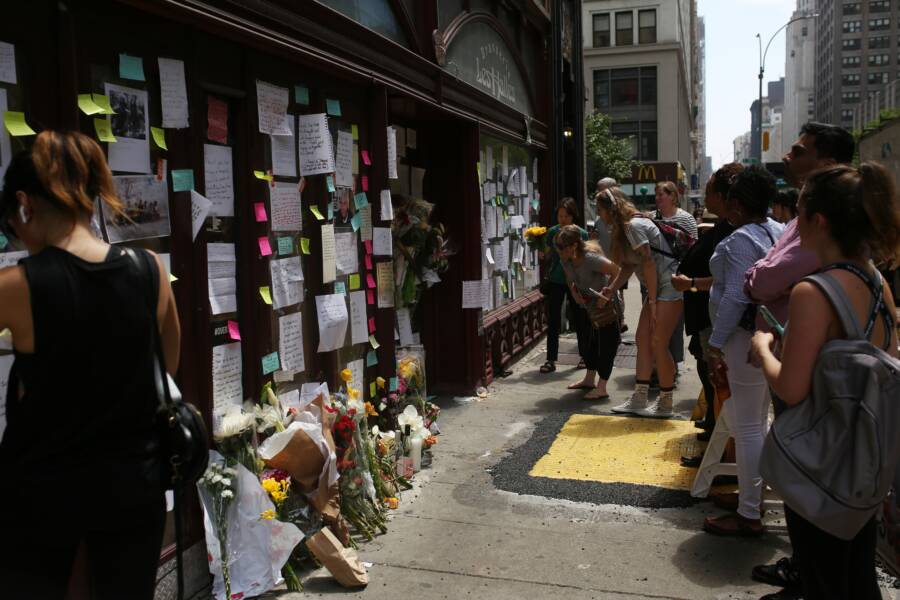 Shortly after Bourdain’s death, mourning fans gathered at Brasserie Les Halles to leave tributes. Colleagues at CNN and even President Obama tweeted their condolences. And Bourdain’s loved ones expressed their disbelief, with his mother saying he was “absolutely the last person in the world I would have ever dreamed would do something like this.”

Some devastated fans wondered why Bourdain killed himself — especially since he had recently claimed that he “had things to live for.” A few even floated ominous theories that Bourdain’s outspoken views had somehow led to his death. For example, Bourdain publicly supported Argento when she revealed that she had been raped by Harvey Weinstein, a former film producer who was later imprisoned for other sex crimes.

Bourdain, never one to bite his tongue, was a vocal ally of the #MeToo movement, using his public platform to speak out against not only Weinstein but other famous people who had been accused of sex crimes. While many women were grateful to Bourdain for speaking up on their behalf, his activism undoubtedly made some powerful people angry.

Still, authorities insisted that there were no signs of foul play at the scene of his death. And there has never been any confirmed evidence that Anthony Bourdain’s cause of death was anything else other than a tragic suicide. 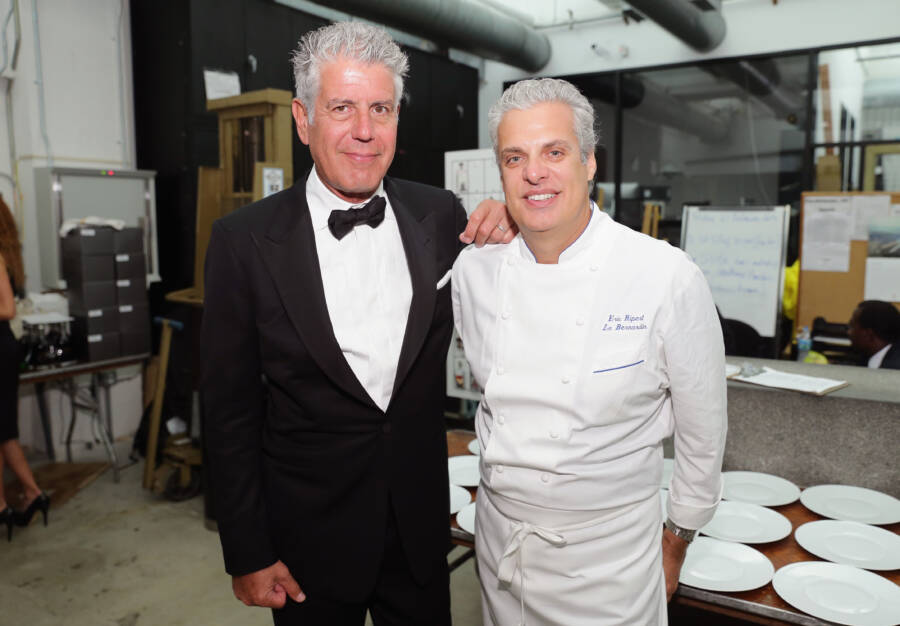 As time went on, Bourdain’s family, friends, and colleagues began to honor his memory in a variety of ways. About a year after he died, Éric Ripert and some other famous chefs designated June 25th as “Bourdain Day” to pay tribute to their late friend — on what would’ve been his 63rd birthday.

More recently, the documentary film Roadrunner explored Bourdain’s life through home videos, snippets from TV shows, and interviews with those who knew him best. The movie — scheduled to be released in theaters on July 16, 2021 — also includes some never-before-seen footage of Bourdain.

While the film touches on Bourdain’s gravitation toward “darkness,” it also shows the beautiful impact that he had on other people during his travels throughout the world and his all-too-short journey through life.

As Bourdain once said, “Travel isn’t always pretty. It isn’t always comfortable. Sometimes it hurts, it even breaks your heart. But that’s okay. The journey changes you; it should change you. It leaves marks on your memory, on your consciousness, on your heart, and on your body. You take something with you. Hopefully, you leave something good behind.”

After learning about the untimely death of Anthony Bourdain, read about the tragic demise of Amy Winehouse. Then, take a look at some of the strangest deaths of famous people throughout history.