"I am sorry, but there were no options here." 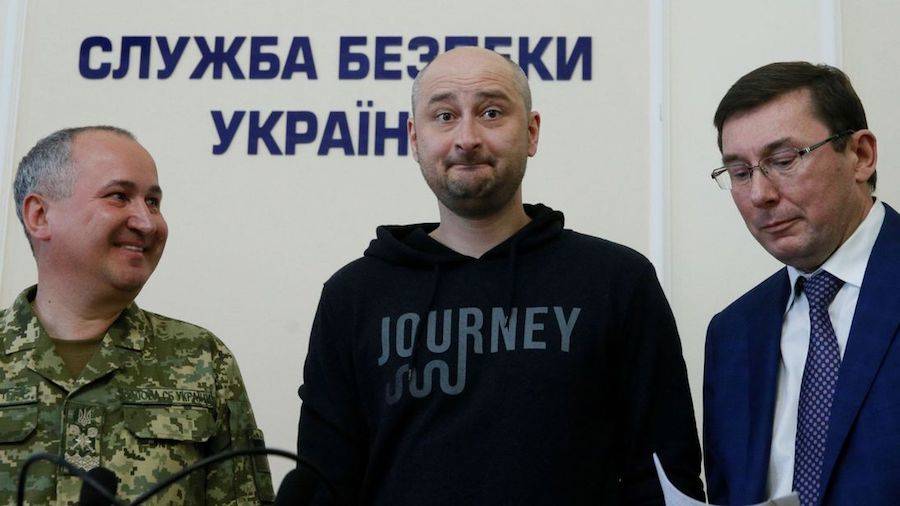 On May 29, 2018, it was reported that Journalist Arkady Babchenko was murdered late that same night. An outspoken critic of Vladimir Putin and the Kremlin, Babchenko was said to have been shot dead at his apartment building in the Ukrainian capital of Kiev.

The reports by police stated that he was found by his wife in a pool of blood and died in the ambulance on the way to the hospital. The news was shocking as Babchenko was considered one of Russia’s best-known war reporters and journalists.

However, it wasn’t as shocking as when Babchenko showed up alive on TV at a news conference broadcast the next day.

As Babchenko walked in and took the floor on May 30, the press gasped and applauded.

Babchenko entered alongside the head of the Ukrainian Security Service, Vasily Gritsak, who said that the murder was staged in response to warnings security officials received of a very real plot to kill Babchenko.

Babchenko allegedly faked his death as part of a sting operation to thwart the attempt on his life and to “expose Russian agents” plotting against him. In revealing details of the complex plot, Gritsak said that Russian government agencies had recruited an assassin for $40,000.

The world thought he was dead for 12 hours and only a limited circle of people knew about the plan. Even close family and friends wrote moving obituaries about how he was killed for his courageous journalism and activism.

In an emotional speech at the press conference, Babchenko thanked those who mourned him and apologized. “I would like to apologize for what you have all had to go through,” he said. “Special apologies to my wife,” he added. “Olekchka, I am sorry, but there were no options here.”

Babchenko told the crowd at the conference that as a result of the operation, which took two months to prepare, one person had been captured. However, it’s not yet clear how the faked death led to the suspect’s arrest.

Babchenko also received backlash after commenting on the Russian plane crash transporting the military choir Alexandrov Ensemble on the way to Syria to perform for pilots involved in Russia’s air campaign on Aleppo.

He also denounced Russia and its support of Syrian President Bashar al-Assad, while blaming both parties for the killings of Syrian children.

Before it was revealed that Babchenko was alive, the Russian Foreign Ministry made a statement which said, “Bloody crimes and total impunity have become routine” in Ukraine.

After the plot was revealed and Babchenko was shown alive, Vladimir Dzhabarov, Deputy Chairman of the International Affairs Committee of Russian Federation Council, said that Kiev had “committed a stupid provocation against Russia” and is now “disgraced in the eyes of the whole world.”

“In order to trace and document the chain from the killer to the organizers and customers,” said Ukrainian MP Anton Geraschenko in a Facebook post, “it was necessary to create in them full confidence that the order was executed.”

Geraschenko compared the operation to Arthur Conan Doyle’s hero, saying that even “Sherlock Holmes successfully used the method of staging his own death for the effective investigation of complex and intricate crimes. No matter how painful it was for his family and Dr. Watson.”

Next read about how the body of H.H. Holmes was dug up To end rumors that he faked his death. Then read about
Vlado Taneski, the journalist who reported on his own crimes.