Meet The Armadillo Lizard: A Mini-Dragon That Curls Up Like An Armadillo

Discover why the armadillo lizard (Ouroborus cataphractus) is one of the most unique creatures on Earth — and why that's caused the species to become threatened. 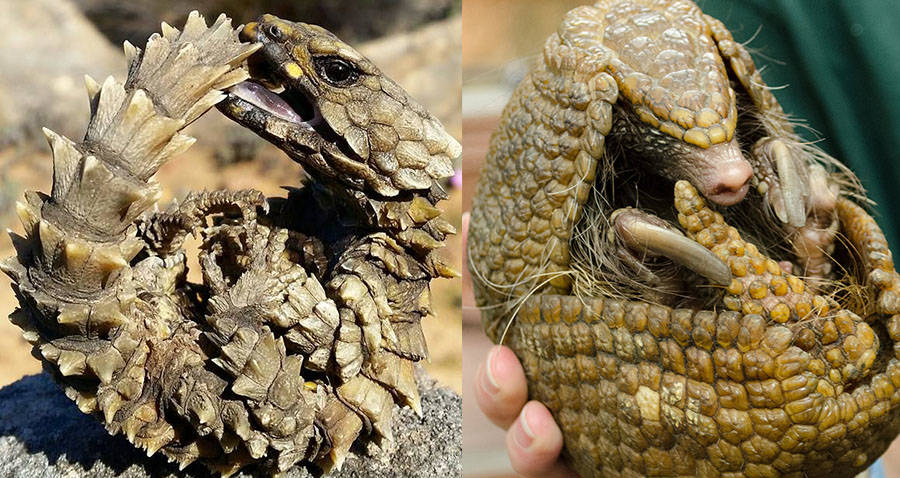 Wikimedia Commons; Tim Pierce/FlickrThe armadillo lizard (left) gets its name from the way it curls up into a ball as a defense mechanism, as armadillos do (right).

With its thorny exterior and unique defenses, the armadillo lizard might be both one of nature’s cutest and one of its most eccentric reptiles. Just as its animal namesake implies, these lizards have sharp armor-like features along their bodies and are known to curl up when they feel threatened just like armadillos. But this impressive built-in armor is not the only fascinating characteristic of the armadillo lizard.

Armadillo lizards hide in large family groups among the rock crevices in South Africa’s desert to shield themselves from the area’s harsh elements and predators. They love to sunbathe under the warmth of the sun and are one of the few reptile species that do not reproduce by laying eggs.

Furthermore, these insect-eaters require little to survive, are relatively easy to catch, and look like little dragons, which is likely why many of them are even kept as pets — and consequently in danger of illegal trafficking that now has this one-of-a-kind creature facing a major threat. 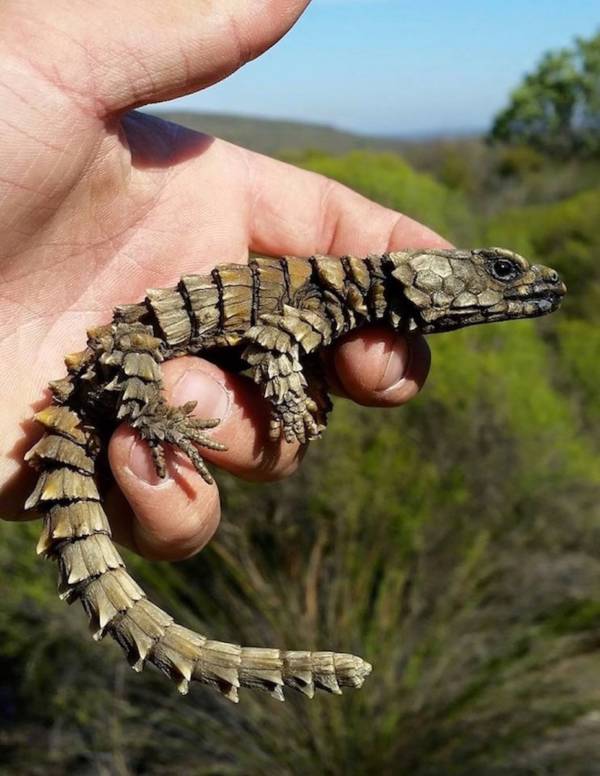 Wikimedia CommonsThough they are slow-moving, these lizards compensate with a body of armor-like spikes.

The armadillo girdled lizard, or Ouroborus cataphractus, can be found in between the rocky mounts of the Succulent Karoo region of South Africa. Also called the golden armadillo lizard, these pointy-looking reptiles may appear dangerous, but they are slow-moving and will try to scurry away when approached by other creatures.

Armadillo lizards have a variety of coloring, which ranges between brown to light yellowish brown. This species of lizard is easy to recognize because its body is covered in sharp heavy spines from head to tail; the only part of their body that is not covered in thorny skin is the underside.

That is why these lizards curl up when they go into defense mode. If it feels threatened, an armadillo lizard will curl itself into a ball until its mouth is biting the end of its tail.

Once it is in this curled-up position, the other parts of its body automatically act as a layer of protection to its soft exposed belly. They can stay in this balled-up position for up to an hour. The armadillo lizard’s unique defense keeps it safe from predators like snakes, big birds, and mongoose.

These dragon-like creatures can grow to about four inches in length for both males and females and can live up to a little over a decade.

A Diet Of Termites

Ouroborus cataphractus is considered to be one of the most fascinating breeds among the armored lizard family.

Their diet consists of small insects and invertebrates but their primary food source is termites — another similarity that the armadillo lizard shares with armadillos — particularly Microhodotermes viator and Hodotermes mossambicus. Termite mounds can often be located far from the lizards’ homes and sometimes armadillo lizards will need to travel distances of up to 60 feet, a long way to travel for an animal of its size.

Their penchant for eating termites makes these lizards dependent on the wellbeing of the termite population on which it feeds. This makes the armadillo lizard vulnerable to environmental changes that impact the termites, such as changing rain patterns or invasive plants harmful to the environment.

The males are naturally territorial with each other. But when mating season comes around, they become even more protective of their turf and their female partner so as to keep other male competitors away.

Because they are one of the few species of lizards that do not lay eggs, armadillo lizards give birth to just one or two offspring a year. The gestation period takes between six to eight months. Sometimes Ouroborus cataphractus mothers can take a year in between giving birth and will feed their offspring, which is an uncommon trait among most reptiles.

Another unusual behavior that the armadillo lizard possesses is its unusual living preferences. The armadillo lizard is considered a social creature and will form communal groups with up to 60 lizards at a time, sharing rock crevices in their natural habitat. In fact, it is very rare to see an armadillo lizard by itself out in the wild.

Researchers have found that individuals do not necessarily stick to one group. There is a high level of movement between groups by males, females, and juveniles alike. Living in large groups as they do provides an extra layer of protection because predators tend to steer away from hunting prey in large groups. However, these big families also mean more mouths to feed.

A study of these reptiles and their primary choice of prey (termites) suggests that armadillo lizards living in large groups will have a lower level of termite consumption during the winter time when insect populations are usually abundant. Scientists believe that this behavior is supposed to reduce competition for food between group members. 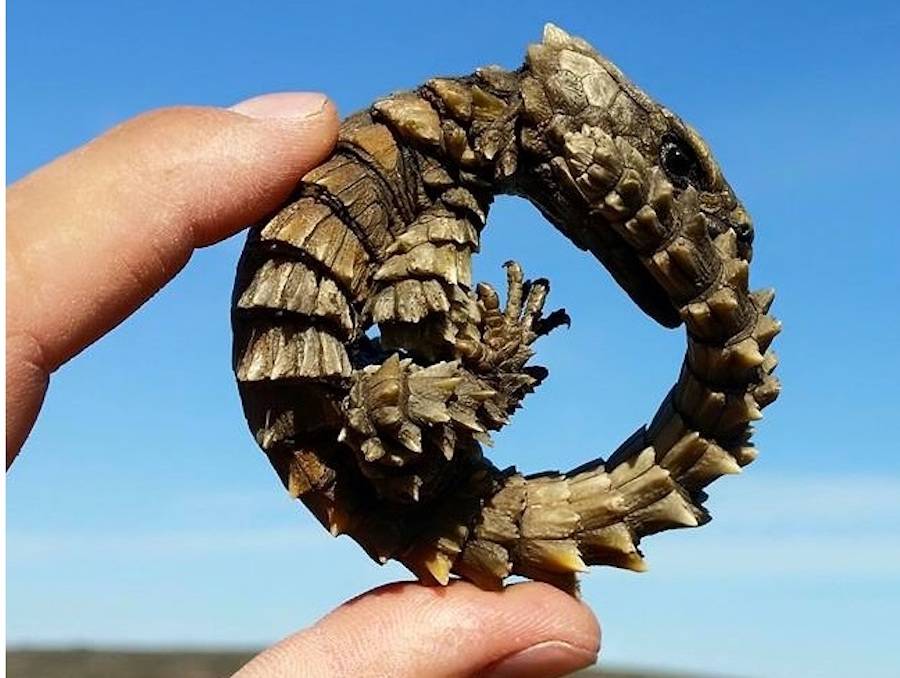 Wikimedia CommonsOuroborus cataphractus can stay in a curled position for up to an hour.

The armadillo lizard is a fascinating creature with unique abilities to help its survival in the wild. Unfortunately, the biggest threat to its population is human beings.

The armadillo girdled lizard may have an intimidating appearance, but these creatures are mild-tempered and not actually dangerous. Their slow-moving disposition and propensity to stay in large groups make them an easy target for collectors.

Up until the late 1990s, Ouroborus cataphractus was classified as a vulnerable population by the International Union for Conservation of Nature (IUCN). Since then, the armadillo lizard’s status has been downgraded to least concern.

Wildlife conservancy groups, like IUCN, that have been monitoring changes in the armadillo lizard population have seen some level of reduction in their collection for the pet trade, which had a huge impact on the overall population in previous years. But Ouroborus cataphractus is still under threat, even though the trade of the species has been made illegal. 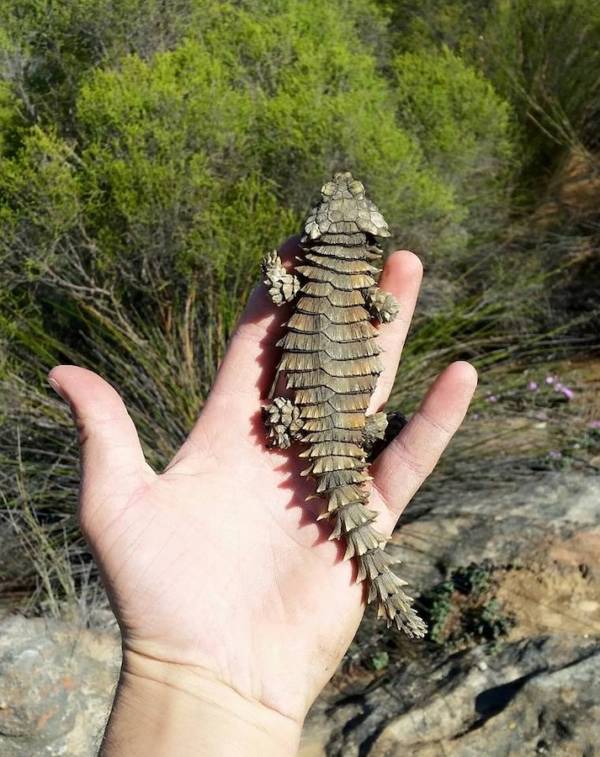 According to Capetown publication IOL, a ring of wildlife traffickers was busted for the illegal possession and transport of 48 armadillo lizards. The criminals were sentenced to 1 million South African Rand (the equivalent of $70,000) or 13 years of jail time. The traffickers were brought down by a network of local law enforcement working with animal conversation and advocacy group CapeNature Conservation Service, including the Biodiversity Crime Unit and multiple municipal police offices of the Stock Theft and Endangered Species Unit.

Reinforcement of this law has not been easy to carry out and many people can still find the armadillo girdled lizard on display at large pet conventions and even in some pet stores. This is precisely what must be stopped if this unique creature is to have a healthy future on planet Earth.

Now that you’ve caught up on the armadillo lizard (Ouroborus cataphractus), learn about the world’s most bizarre animal species. Next up, meet Glaucus Atlanticus, the world’s most beautiful and deadliest slug.