Meet The Chinese Water Deer: The “Vampire Deer” That Grows Fang-Like Tusks Instead Of Antlers

Despite its name, Chinese water deer are found across Europe and possess remarkable survival tactics that allow them to thrive in varied climates. 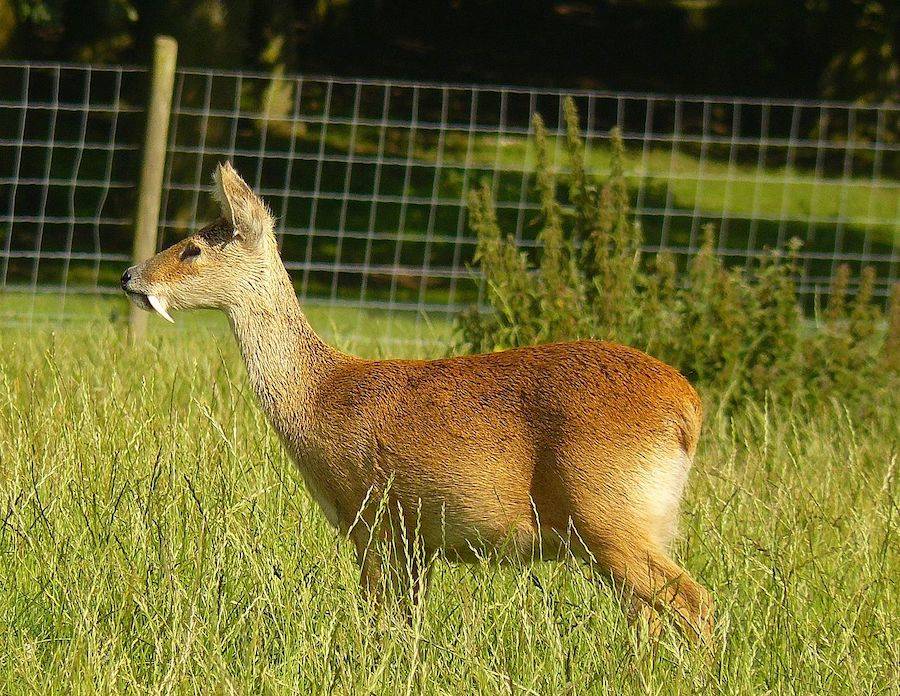 Wikimedia CommonsChinese water deer have unique tusks instead of antlers.

When you look closely at the Chinese water or “vampire” deer, it is obvious that they are different from any other type of deer you’ve seen. The most noticeable aspect of its appearance is the two robust tusks that protrude from the edges of the Chinese water deer’s mouth followed by a relatively adorable set of teddy bear-like ears.

These unusual “fangs” have earned the water deer the nickname “vampire deer” and when combined with the soft round ears, give the deer’s otherwise cuddly appearance a goofy and somewhat intimidating look. Aside from their prominent tusks, the Chinese water deer appears harmless. But just like any other natural defense, its protruding tusks can cause serious damage against threats and other animals.

Originating from East Asia, the bite-size species remains below two feet tall when full-grown and can be observed all over the world as an exotic zoo attraction — though the Chinese water deer is more than just a sight to see. 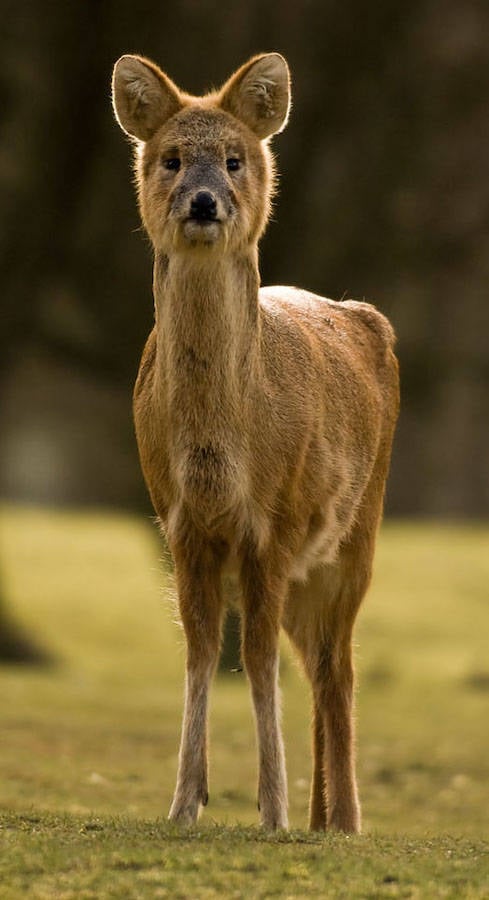 The Chinese water deer, or Hydropotes inermis, is considered to be among the smaller species of deer that exist worldwide. Indeed, true to their teddy bear-appearance, both adult males and females reach a height of just 22 inches from the shoulder line and weigh about 25 to 40 pounds.

Their small proportions combined with having a gallbladder and bladder instead of facial glands biologically links the vampire deer to the subspecies of tiny and shy musk deer rather than other deer. This also means that the vampire deer usually has a dark brown coating of fur with a lighter shade covering the front of its neck and underside. Like most musk deer breeds, Chinese water deer grow tusks instead of antlers which can grow up to more than two inches long.

Chinese water deer mainly enjoy munching on grass, grains, and any vegetables that they can find. Their tusks are not used as feeding tools so these “fangs” have no other function other than as weapons.

The males, or bucks, use their tusks to fight off other bucks for potential mates and to protect themselves against predators. Unlike antlered deers, fighting between tusked Chinese water deer rarely results in a fight to the death, and instead, their sharp fangs cause serious injuries.

The tusks of a Chinese water deer suggests that they are a very primitive species of deer that developed these peculiar fangs before they evolved to have antlers. 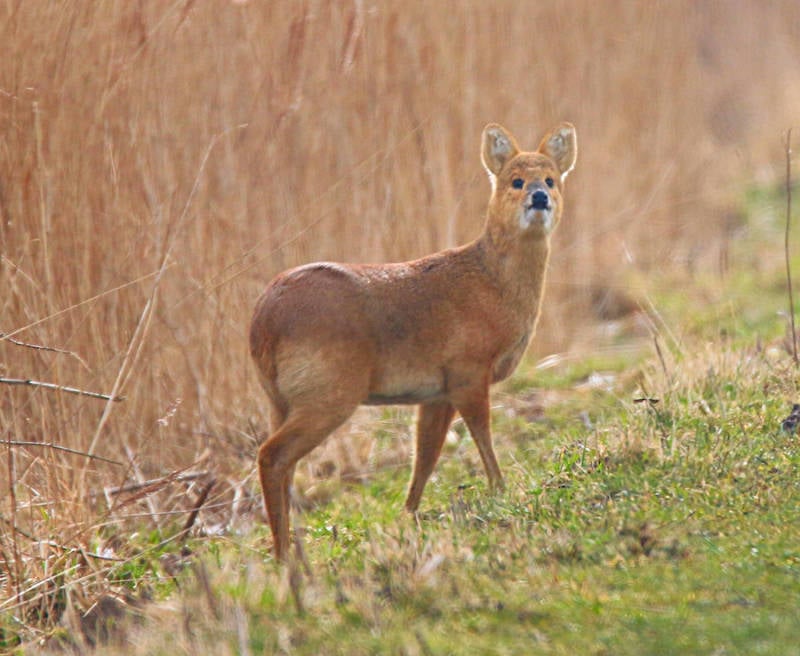 The Chinese water deer is a solitary animal except when it is mating season. Instinctively, they will go searching for partners to mate with between November to December.

Both males and females, or does, are known to whistle and squeak loudly during their courtship and will often scream at one another when being chased. Experts refer to these noises as “barks.” Once coupled, the pair will usually stay together until April.

Female Chinese water deer stay pregnant for six to seven months and will usually give birth to two to six babies, or fawns, at a time. It is a high birth rate for deer, but roughly 40 percent of newborn deers will die within the first four weeks of being born. Baby water deer are not born with their famed tusks but will start to grow them when they reach the age of six to seven months old.

The Diaspora Of The Vampire Deer

The vampire deer is indigenous to the Jiangsu province around the Yancheng Coastal Wetlands and the Zhejiang islands in China where the aptly-named species swims adeptly. They are also commonly found in the other provinces of Hubei, Guangdong, Shanghai, Henan, and Fujian. A close relative of the Chinese water deer, the Korean water deer, can be found nationwide in Korea.

They are a very active species but most of their activity occurs after dusk. Their preference for lush wetlands earned them their name and they are excellent swimmers known to tread for up to seven miles without rest. If they need to travel further to find more vegetation to graze on, their ability to swim allows them to move in between islands to reach different food sources and has likely been a factor in their continued, plentiful existence.

Although they are native to East Asia, the Chinese water deer were brought into U.K. territory in the 1800s. Their quirky fanged look gave them an exotic appeal so they were mainly brought in as rare additions to the local zoos. But by 1929, a number of deer had escaped from the Whipsnade Zoo and eventually populated the English countryside, mainly in Bedfordshire, Cambridgeshire, and Norfolk. 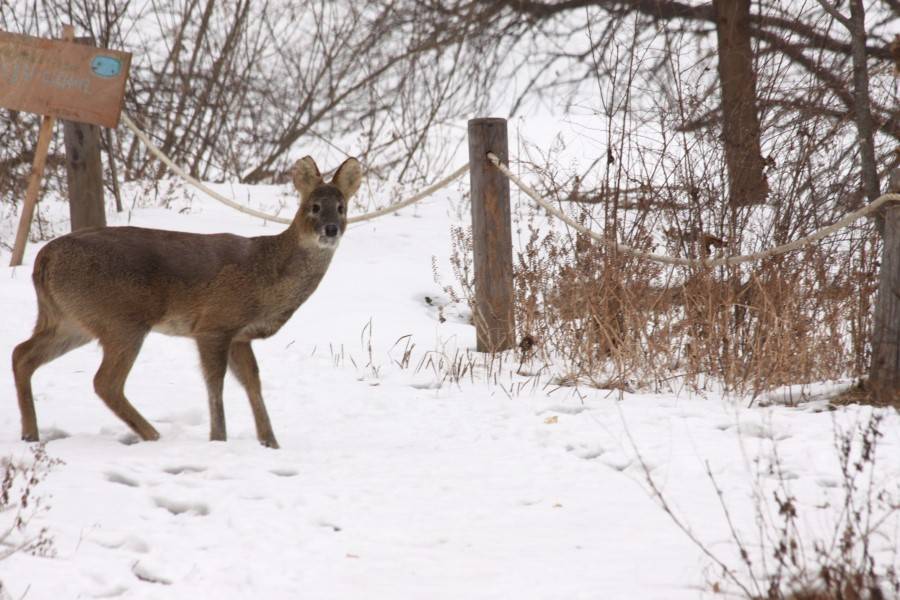 This breed of musk deer was built to live in colder climates which is why it was able to adapt so well to its Western European habitat. This environment is also similar to its original environment in East Asia and has since thrived in the U.K. and elsewhere in similar climates.

Because the Chinese water deer is so adaptable, it can also be found in Argentina and even some parts of the U.S. They were introduced to France as well, but there have not been any sightings of the animal since 2000. It is presumed to be extinct in the country and the International Union for Conservation of Nature (IUCN) has listed the bite-sized deer as “vulnerable.” For their 11-year span of life, the vampire deer will face threats from encroaching roads and buildings, hunting, and wet winters.

Ultimately, though, considering the primitive deer’s persistence and resilience thus far, it is likely safe to predict that they will find a way to survive.

After reading about the water deer and its unique canine-like “fangs,” read about the mass reindeer poaching that wiped out 20,000 reindeers in Siberia. Then, learn about Chronic Wasting Disease, a brain disease that infects deers and turns them into zombies.