For The First Time, You Can Now Actually See An Atom [PHOTO]

A scientist was able to capture a photo of a single atom without the use of a microscope. 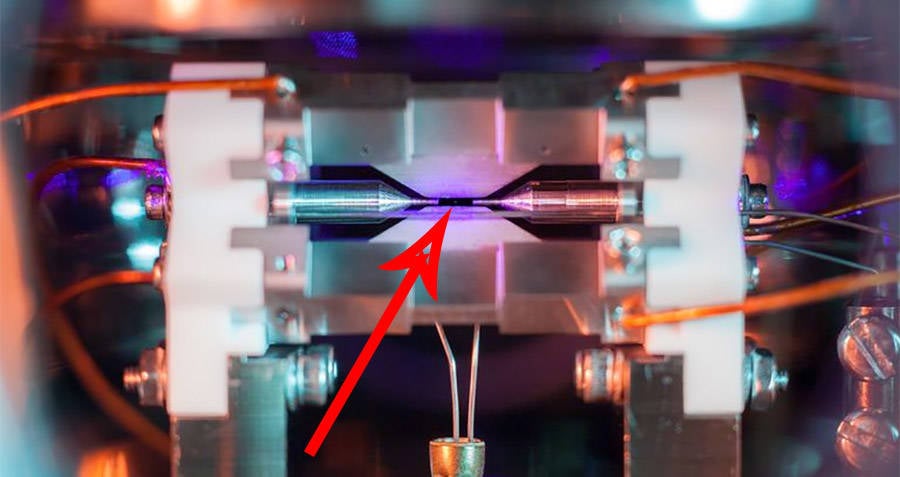 Forget everything you know about atoms.

Bet that took a while.

If there is something about atoms from grade school science class that may have stuck, it’s likely the assertation that atoms are invisible to the naked eye.

Well, a recent photo, taken by David Nadlinger, dispells that concept. The photo, titled Single Atom In An Ion Trap shows a single strontium atom floating in an electric field and is large enough to see without a microscope. It won Nadlinger the top prize at a science photo competition, appropriately called the 2018 Engineering and Physical Sciences Research Council science photography competition.

The photograph was taken in an Oxford University lab. Here’s now Nadlinger did it: he used two metal electrodes, spaced two millimeters apart, to hold the strontium atom almost motionless.

Speaking of the type of atom (and going back to those school days), there are over 109 different types of atoms, one for each element on the periodic table.

Nadlinger used a strontium atom because of its size — its made up of 38 protons and has a diameter of a whopping few millionths of a millimeter.

The atom was then blasted by lasers. 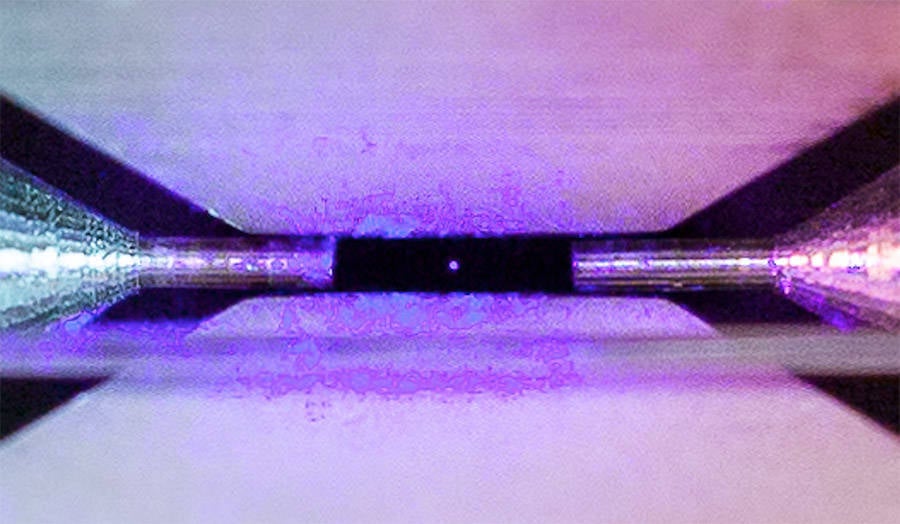 David Nadlinger/EPSRCThe image of the Atom zoomed in.

This trick of hitting the atom with a high powered laser makes the atom much brighter. It also makes the electrons that orbit the atom become more energized. Occasionally, the energized electrons give off light. When they give off enough light, it makes it possible for a camera to capture the atom.

Even with all that work, and even though the atom is visible, it still isn’t easy to see. One must look very closely at the center of the photo. That faint blue dot, the one that’s being illuminated by a blue-violet laser, that’s the atom.

And even with the setup Nadlinger constructed, the atom is too faint to pick up with equipment. While it didn’t need a microscope, the image was taken with a regular camera using a long exposure shot.

So what makes it so cool?

It basically has to do with quantum theory. It is considered one of the most successful theories of nature. But the quantum world is so complicated, instead of any kind of lesson, the biggest thing to know is that it continues to baffle even the most established scientists. A PBS article says, “physicists and philosophers of science can agree only that there is no real consensus on what quantum theory actually says about the world.”

The most basic explanation has to do with the probably that a particle will move from point A to B.

Nadlinger is quoted as saying, “The idea of being able to see a single atom with the naked eye had struck me as a wonderfully direct and visceral bridge between the minuscule quantum world and our macroscopic reality.”

It also raises doubt about how sure we are of the surest things. There are some scientific theories that have been around for so long they’re taken as hard fact. Photos like this one beg the question, how much do we really know?

Speaking of awards, check out the world map that won a prestigious design award. Then look at the photo of the 305 million-year-old spider ancestor discovered by scientists.