The AuthaGraph map is the most accurate map you'll ever see. You probably won't like it.

The world maps we’re all used to operate off of the Mercator projection, a cartographic technique developed by Flemish geographer Gerardus Mercator in 1569. This imperfect technique gave us a map that was “right side up,” orderly, and useful for ship navigation (because it kept longitudes consistent and the angle from any point to the North Pole constant) — but also one that distorted both the size of many landmasses and the distances between them.

To correct these distortions, Tokyo-based architect and artist Hajime Narukawa created the AuthaGraph map over the course of several years using a complex process that essentially amounts to taking the globe (more accurate than any Mercator map) and flattening it out: 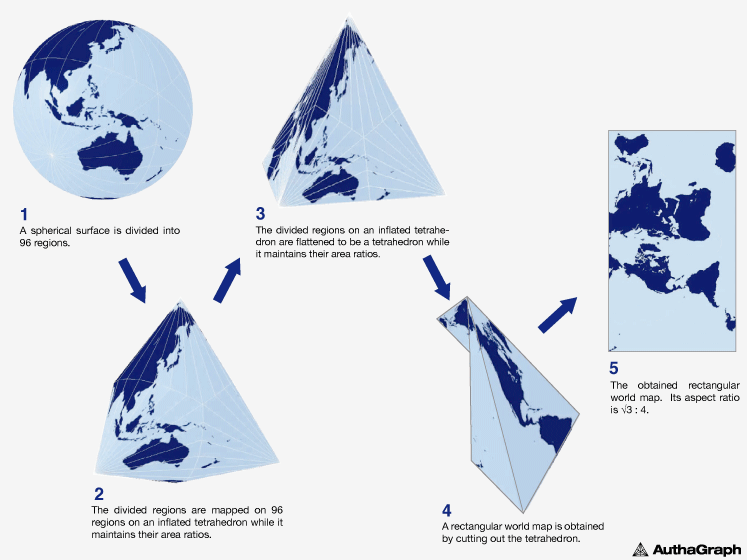 Narukawa’s process indeed succeeded in creating a map that no longer shrinks Africa, enlarges Antarctica, or minimizes the vastness of the Pacific — and the list goes on.

In recognition of Narukawa’s success, he’s now beaten out thousands of other contestants to receive this year’s Grand Award from Japan’s Good Design Awards, and his map is featured in textbooks for Japanese schoolchildren.

“AuthaGraph faithfully represents all oceans [and] continents, including the neglected Antarctica,” according to the Good Design Awards, and shows “an advanced precise perspective of our planet.”

Furthermore, according to Narukawa, his map means a lot more than just a faithful cartographical representation of our planet. Because Earth is now facing down issues like climate change and contentious territorial sea claims, Narukawa believes that the planet needs to look at itself in a new light — a view that perceives the interests of our planet first and its countries second.

After reading about the authagraph map, check out what maps get wrong about the world. Then, dive into 33 maps that explain America better than any textbook.