The Battle Of Bosworth Field: The Epic Finale To The English War Of The Roses

In the final battle of the English Civil War, King Richard III faced off against the rival for his throne, Henry Tudor, in harrowing man-to-man combat. 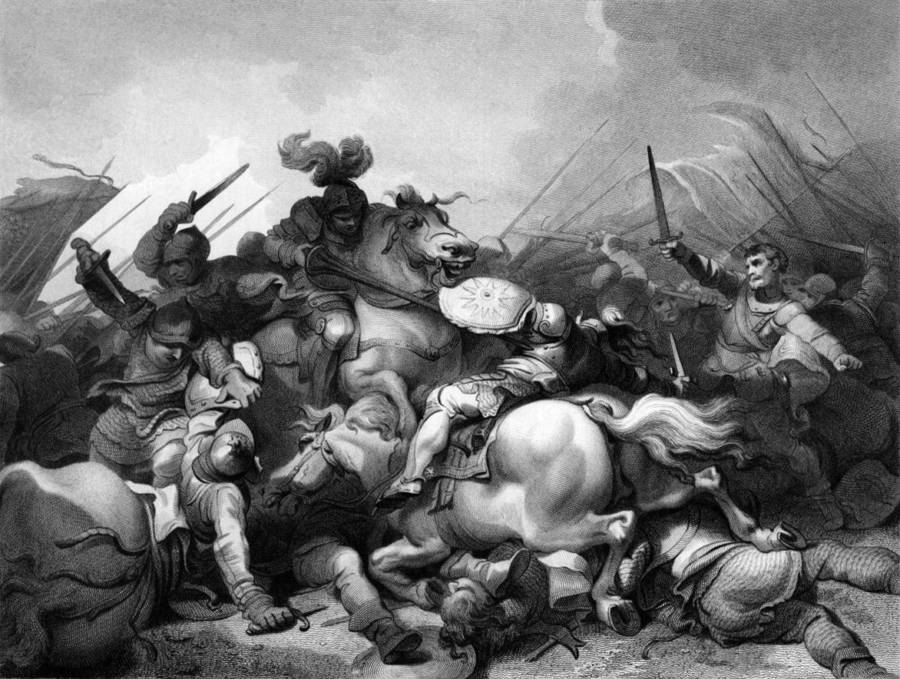 For 32 years, England was torn apart in a brutal civil war between the Lancasters and the Yorks. It was known as the War of the Roses, and in a brutally hands-on rumble between the two sides represented by King Richard III and Henry Tudor, the whole war came to an end in the bloody Battle of Bosworth Field.

Only one of the men would leave the battlefield alive and thus bring an end to the English civil war and an entire dynasty.

The War Of The Roses 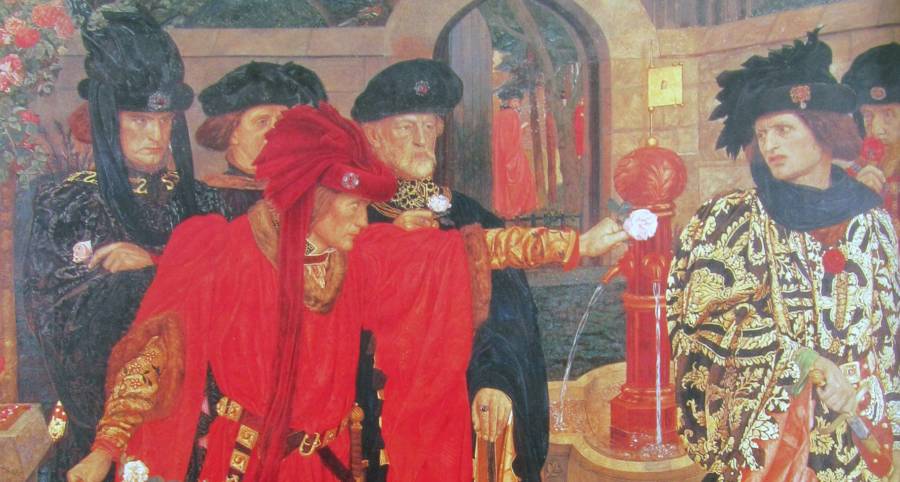 Wikimedia CommonsThe lords of England choose their sides in the civil war, based on the works of Shakespeare, as painted by Henry Arthur Payne in 1908.

The War of the Roses had already seen 32 bloody years before the Battle of Bosworth Field. England had been in a civil war since King Richard III was an infant and Henry Tudor was yet to be born. War, consequently, was all those two men had ever known.

The war had begun in 1455, when Richard, Duke of York, challenged the Lancastrian King Henry VI’s right to the throne. The York army had succeeded and planted Richard’s son, King Edward IV on the throne, and chased Henry VI out of the country.

But the Lancasters never gave up their battle to reclaim the throne, and the nation continued to tear itself apart in the throes of a civil war. Because each house represented itself with a floral insignia, the war became known as one of “the roses.”

By the time the Battle of Bosworth Field had begun, the York’s Richard III was king. He had been named Protector of England by his elder brother, Edward IV, who had asked him to lead the country until his 12-year-old son became old enough to inherit the throne.

But instead, Richard had the young prince and his 9-year-old brother locked in a tower and claimed the throne as his own.

The boys then disappeared in 1483. A debate remains to this day about what might have happened to the princes; but at the time, most believed that Richard had killed the princes in the Tower to secure his claim to the throne.

With infant blood on the hands of the king, one last revolt rose up against Richard III and the York dynasty. But in the horrors of the war, every Lancaster with a defensible claim to the throne had died out.

There was only one man left with any ground on which to challenge Richard III from the Lancaster side: Henry Tudor.

Henry Tudor was the great-grandchild of the illegitimate grandson of a king who’d died more than a hundred years before, and even that was only on his mother’s side. He had a thin claim to the throne, but he was England’s only hope to overthrow the onerous Richard III.

The Battle of Bosworth Field 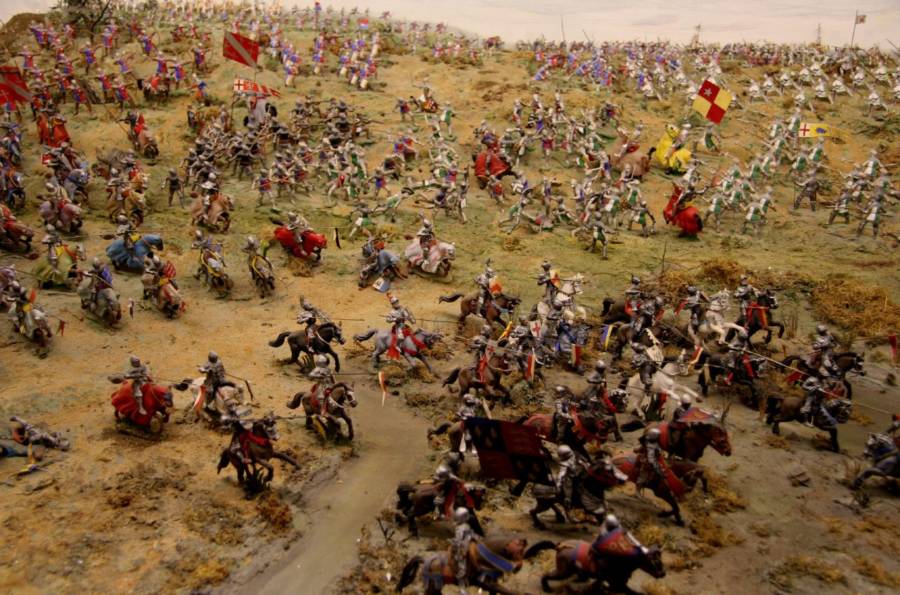 Wikimedia CommonsThe armies at the Battle of Bosworth Field charge into battle, as depicted in a diorama by John Taylor in 1974.

On Aug. 7, 1485, Henry Tudor’s army landed on the southwest coast of Wales. They stampeded through England toward Richard III. The road ahead, though, wouldn’t be easy. Richard III’s army vastly outnumbered the Tudors. By some accounts, Richard had as many as 10-15,000 men, with arms and artillery at their sides, ready to meet Henry’s mere 5,000.

There was a third army, though, and they could easily change the tides of the battle. The Stanleys, a wealthy family, had 6,000 men on retainer and they had yet to choose a side. In order to persuade them, Richard kidnapped the eldest Stanley son and held him hostage as collateral for the family’s support in the war.

All three armies met south of the village of Market Bosworth to battle it out on the moors.

Richard III divided his army into the three groups, positioned in strategic locations at the top of Ambien Hill. Henry kept his men together and moved by the marsh underneath. The Stanleys stayed at the side and watched the battle unfurl. They waited to gauge the winner before they made a move.

Richard then made his threat against the Stanleys explicit. He sent a messenger to Lord Stanley to warn him that if the family failed to join him in the battle against Henry Tudor, his son would die. 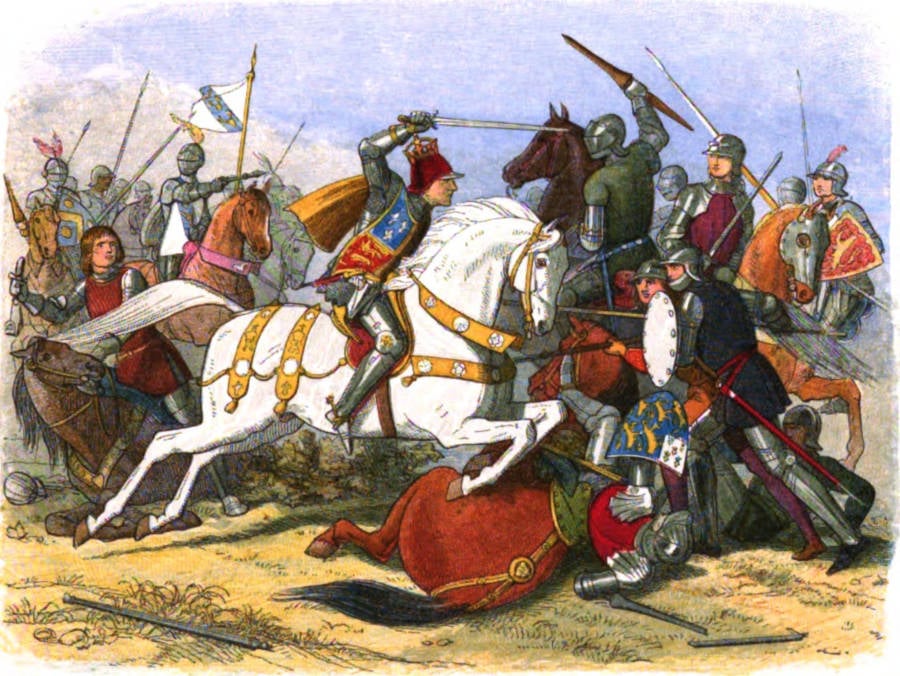 A hail of cannon fire fell down on Henry Tudor’s army as they struggled to make their way around the marsh. They pressed on until the armies met in the moors and the war became then a brutal clash of steel, skin, and blood.

Richard III was a powerful warrior. Even his enemies when the battle had ended admitted that he “bore himself like a gallant knight”.

The king ran straight into the fray and even took on Henry Tudor’s giant, the 6’8″ tall John Cheney. Cheney was the tallest soldier in all of England and one of the most feared men on the battlefield. Richard III challenged him on his own and knocked the giant down to the ground.

The York army, though, didn’t share their king’s strength and fervor. Even with the numbers on their side, they failed fast under the Lancasters’ blade at the Battle of Bosworth.

Some men watched in horror as Richard’s standard-bearer, Percival Thirwall, had his legs hacked off from under him in battle. Thirwall tried to keep them inspired, clinging on to his king’s standard even as his limbs were torn from underneath him, but it wasn’t enough. Panic swept through the York’s ranks.

The third part of the York army, those who belonged to the Stanleys and under the command of the Earl of Northumberland, still hadn’t entered the fray. Richard signaled to Northumberland to defend his king and bring him victory at the Battle of Bosworth.

But the Earl of Northumberland and the thousands of men under his command simply stood back and watched, until Northumberland ordered his men to leave the battlefield — and their king to his death.

Mere minutes before, Richard III had outnumbered his enemy nearly three-to-one. But with this betrayal, the York men were panicked and ran for their lives from Bosworth Field.

A harsh, unavoidable truth now stared Richard in the face. He was going to lose the Battle of Bosworth – and the war. 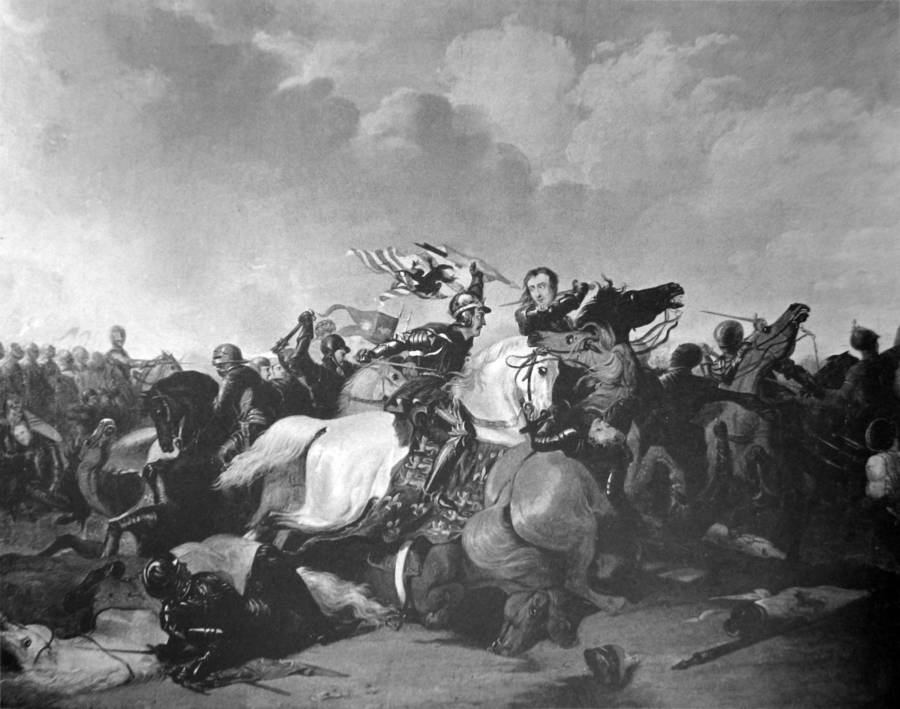 Wikimedia CommonsRichard III and Henry Tudor fight in the center of Bosworth Field, as painted by Abraham Cooper in 1825.

Richard’s army – or what remained of them – begged their king to flee the battlefield, but the king refused. “God forbid I yield one step,” he said. “This day I will die as a king or win.”

Henry Tudor hid in the back rows of his army and Richard knew that there was still a chance to win.

Richard and his most trusted men mounted their horses and tore through the Lancaster army. They drove their charge directly toward Henry himself. They plowed through the army until the tip of Richard’s lance was little more than a foot away from his foe.

But it was at that moment that the Stanleys entered into the Battle of Bosworth. They rushed Richard’s charge and cut it short. Then they knocked him off of his horse.

One-by-one, Richard’s men were cut down around him, but the king fought on, no matter how much blood he lost.

Based on the skeleton he left behind, historians believe that a halberd – an axe-like weapon on the end of a six-foot long pole – came down on Richard’s head and knocked his helmet off as he was thrown to the ground.

But even that could not end the lion-hearted Richard. He fought on, his head uncovered, and was even repeatedly gouged by a dagger into the skull. Gushing blood, Richard staggered back to his feet and lunged at Henry.

The halberd fell once more and finally crushed the king’s unprotected head. The back of his skull was cut clean off.

Richard staggered for a second, still refusing to fall, and terrified that nothing could possibly kill this demon of a man, another soldier thrust his sword up through the base of his skull until it had lodged into his brain.

The king – finally – was dead.

The Battle of Bosworth thus ended the civil war.

The Dawn Of The Tudor Dynasty 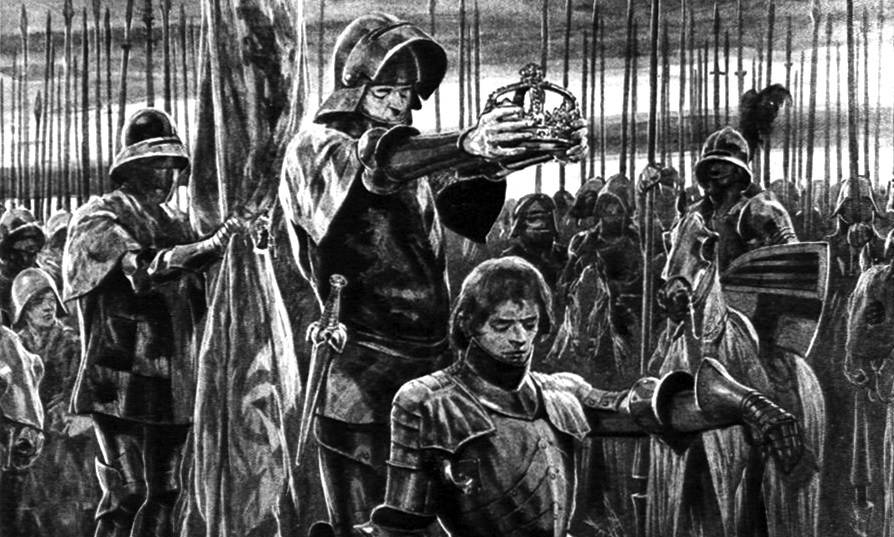 The crown is placed atop Henry VII’s head, by Richard Caton Woodville in 1902.

No humiliation was spared for Richard III. Henry’s men trussed him up like a hog with his genitals exposed and paraded his corpse through Leicester.

A whole dynasty died with him. The era of the Yorks and the Lancasters, known as the Plantagenet Dynasty, came to an end. Henry Tudor was crowned King Henry VII of England under a nearby oak tree in Stoke Golding, not far from where the Battle of Bosworth had taken place.

Northumberland, for his part, paid the price for betraying his king in the Battle of Bosworth Field. On April 28, 1489, a mob hunted him down and tore him from limb to limb.

Few shed tears for his, or the king’s, death. Even with Henry VII in power, the Great Chronicle of London declared that Northumberland had been killed for his “deadly malice” in “the disappointing of King Richard at Bosworth Field.”

Within a few years, peace had returned to England. There were other claimants to the throne, but Henry was able to hold them off, and the Tudor dynasty carried on.

The impact on history would be incredible. The Battle of Bosworth Field was the flapping of the butterfly’s wings that would reshape the face of England.

Henry VII’s heir, Henry VIII, would cut ties with the Roman Catholic Church and start the Church of England. His granddaughter, Elizabeth I, would help bring in a flourishing era of English literature and exploration that saw the success of men like Sir Francis Drake and William Shakespeare.

Without the Battle of Bosworth Field, pilgrims of the Plymouth Colony may never have traveled to the New World. The whole history of England, of the Americas, of Christianity, and of the whole world would have followed down an entirely different path.

When Richard III called for his horse to charge Henry, in that instant, the entire world changed.

After this look at the Battle of Bosworth Field, learn more about the mystery behind Richard III and the Princes in the Tower. Then, read up on Henry VII’s rebel son, Henry VIII.