The Battle Of Mogadishu: The Harrowing True Story Behind Black Hawk Down

What was meant to be a 90-minute mission became a 15-hour battle as two American Black Hawk helicopters were shot out of the sky, leaving the stranded soldiers surrounded. 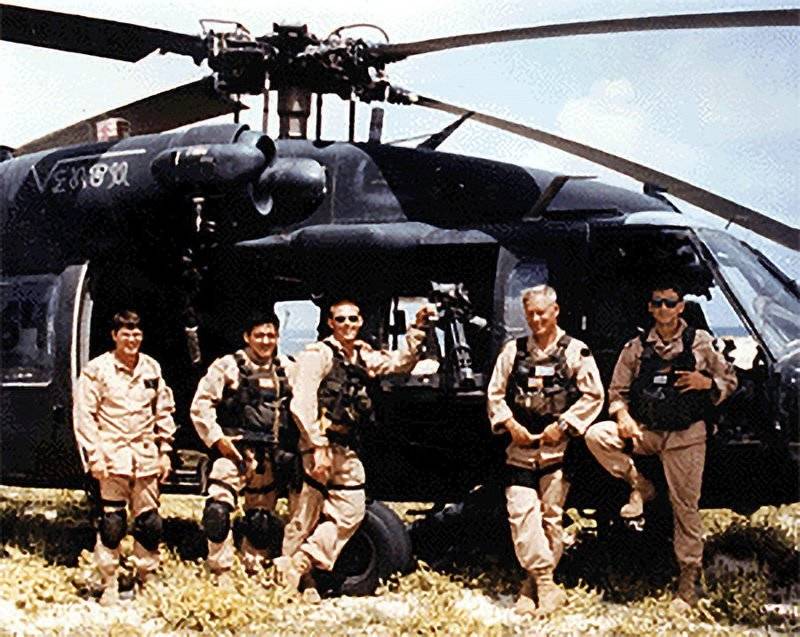 Wikimedia CommonsMichael Durant’s crew a month before the Battle of Mogadishu.

The Battle Of Mogadishu is more than an underdog story. A small contingent of America’s various elite special forces was sent to collect two henchmen of the violent Somalian warlord Mohamed Farrah Aidid — and the warlord himself if they could manage. The experience has been recorded in both a book and a blockbuster film, but the true story behind Black Hawk Down is almost more unbelievable than the Hollywood version.

Somalia Wins Its Independence At A Bloody Cost

The country of Somalia is roughly the size of the state of Texas with a stifling arid climate. Despite its lack of arable land, Somalia possesses a strategic location on the Eastern coast of Africa which has historically made it a tempting target for European colonizers well into the 20th century. 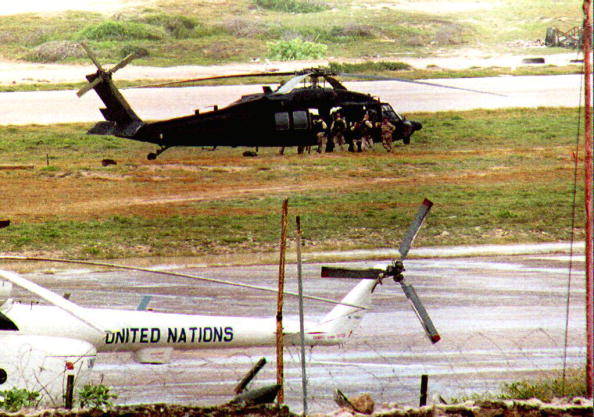 ALEXANDER JOE/AFP/Getty ImagesA group of U.S. Army Rangers sit in the door of a Black Hawk helicopter at Mogadishu airport on August 28, 1993.

But when Somalia earned its independence from European conquerors in 1960, the power vacuum that remained was filled by a ruthless military dictator: Muhammad Siad Barre.

After Barre seized control of the government in a coup, he forced the Somalian people to undergo an experiment of “scientific socialism.” But the results were only the devastation of an already-poor economy and the mass starvation of the people.

Barre was finally forced out of office due to civil unrest in 1991, but this once again left a power vacuum at the head of the Somalian government. This time, however, it was filled not by a single dictator but by fighting clans of violent warlords, including the Soviet-trained strongman Mohamed Farrah Aidid.

By 1992, the famine in Somalia had killed an estimated 100,000 people in just five months. The United Nation’s attempts to deliver food in a humanitarian aid effort were thwarted by the chaos reigning in the country. The U.N. finally voted to send in around 13,000 troops from several different countries to curb the violence and ensure delivery of aid. They were desperate to prevent what was estimated to be over 2 million Somalians from starving to death.

But General Aidid was less than grateful. “We don’t need outsiders,” he said, and threatened the peacekeepers that he would “send them home in body bags.”

The violence had not ceased a year later. After Aidid’s men ambushed and killed two dozen members of a peacekeeping force in June of 1993, the mission of the U.N. troops changed from keeping the peace to taking out Aidid and his cronies. But they had not anticipated a battle in the heart of Somalia’s biggest city, Mogadishu. 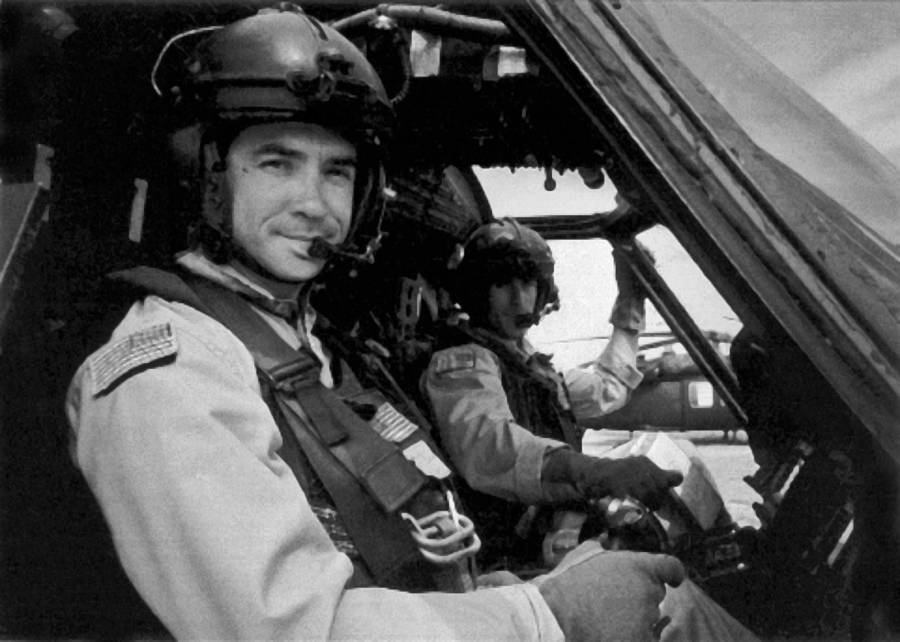 YouTubeMichael Durant in his Black Hawk before the Battle Of Mogadishu.

The Battle Of Mogadishu

On Oct. 3, 1993, 160 U.S. soldiers led Operation Gothic Serpent into Mogadishu, the Somalian capital, on a mission to capture Aidid and his top lieutenants. The troops consisted mostly of Army Rangers and Delta Force Operators: some of the most elite battle units and special forces in the entire world, but also Pakistani and Malaysian task forces too.

The mission was meant to take no more than 90-minutes, but as the small band of soldiers approached from their Black Hawk helicopters, the troops inside saw a city that “had been ravaged by some fatal urban disease”, with its buildings turned to rubble and streets brimming with trash and refugees.

Then, one of the soldiers exiting a helicopter missed the rope and fell 70 feet to the street below. He sustained severe injuries, but would later recover.

Crowds soon gathered on the street to watch what was unfolding and the scene quickly descended into chaos.

Then the unthinkable happened: Somalian militiamen launched grenade-propelled rockets and downed two of their copters. The soldiers on the ground “followed the smoke trail of the grenade” in horror and watched as it connected with Black Hawk Super Six One. Then, “they all heard the thunderclap.”

The battle of Mogadishu had begun.

The True Story Of Black Hawk Down

Helicopter Super Six One’s pilot and co-pilot were killed instantly. Although a rescue force helped save the injured survivors, another man would later die of his wounds. Chief Warrant Officer Mike Durant was piloting a second Black Hawk when his chopper too took a hit from a grenade launcher. Suffering a broken back and unable to move, Durant could hear the approaching crowd moving towards him and thought to himself “they are on their way and they are going to kill me.” 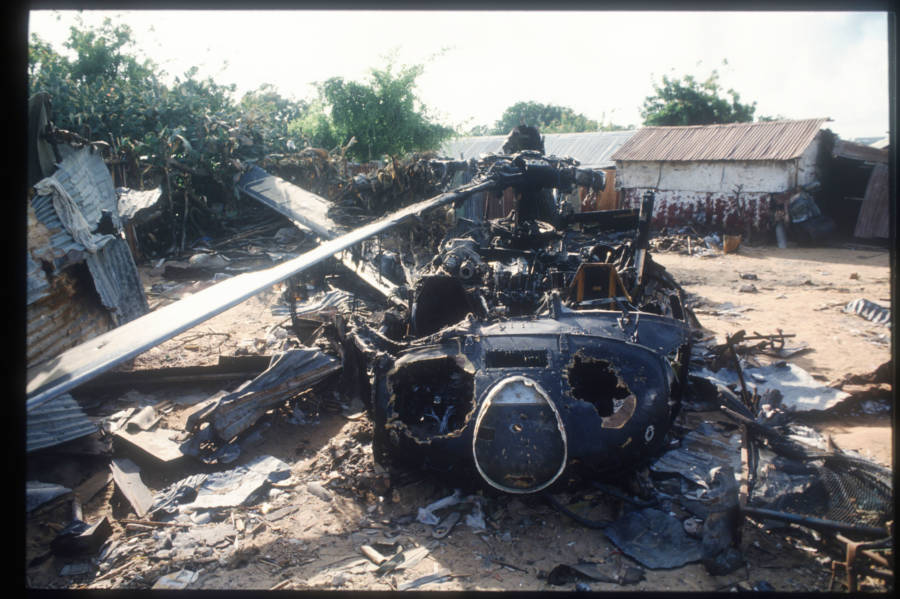 But Master Sgt. Gary Gordon and Sgt. 1st Class Randy Shughart volunteered to jump into the fray in an attempt to save their comrade. “The volume of gunfire was unbelievable,” Durant recalled as his rescuers attempted to hold back the enemy in an epic last stand.

The Americans could not compete with the sheer volume of Somalis: Gordan and Shughart were soon killed and Durant was taken captive and held for 11 days, tied up with a dog chain until he was released back to U.S. forces.

The mission consequently turned into a 15-hour battle.

When the 10th Mountain Division did come to relieve the trapped soldiers, they were accompanied by Malaysian and Pakistani U.N. forces. But the mission had not planned nor coordinated with U.N. forces in the event of a disaster like this, and consequently, the recovery of the surrounded American troops became difficult and delayed.

Footage of the battle on 60 Minutes.

The operation cost two Black Hawk helicopters and 18 American lives as well as 73 injuries. This does not include the deaths from Pakistani and Malaysian forces. Bodies of the U.N. soldiers were also dragged through the streets of Mogadishu.

Although most Americans recall the Battle of Mogadishu as a complete fiasco, the Special Forces did actually succeed in their mission of capturing the two Aidid lieutenants.

As one veteran of the mission who later served as an adviser on the movie Black Hawk Down recalled, “We kicked their butt, but that was at a tactical level. At the strategic and political level, when you have some casualties, it looks like there was a problem.” 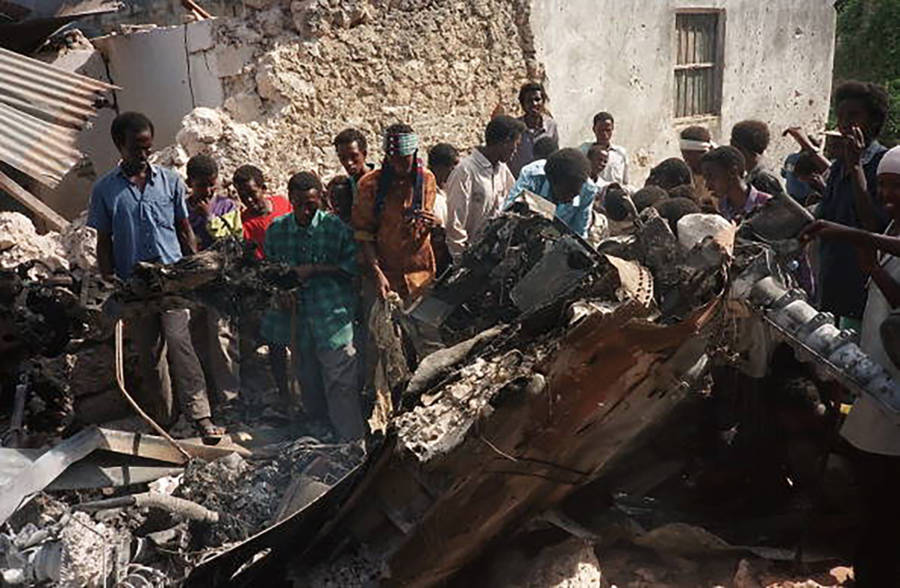 STR/AFP/GettyImagesSomalis look at the wreckage of a Black Hawk helicopter after it was shot down.

The mission was also portrayed as a complete disaster in the press.

Then-President Clinton later declared the events in Somalia to be one of the “darkest hours” of his presidency. Michael Durant would later be awarded high honors the Purple Heart, Distinguished Flying Cross, and the Distinguished Service Medal. He would also serve as an advisor on the film to make the true story of Black Hawk Down more realistic. 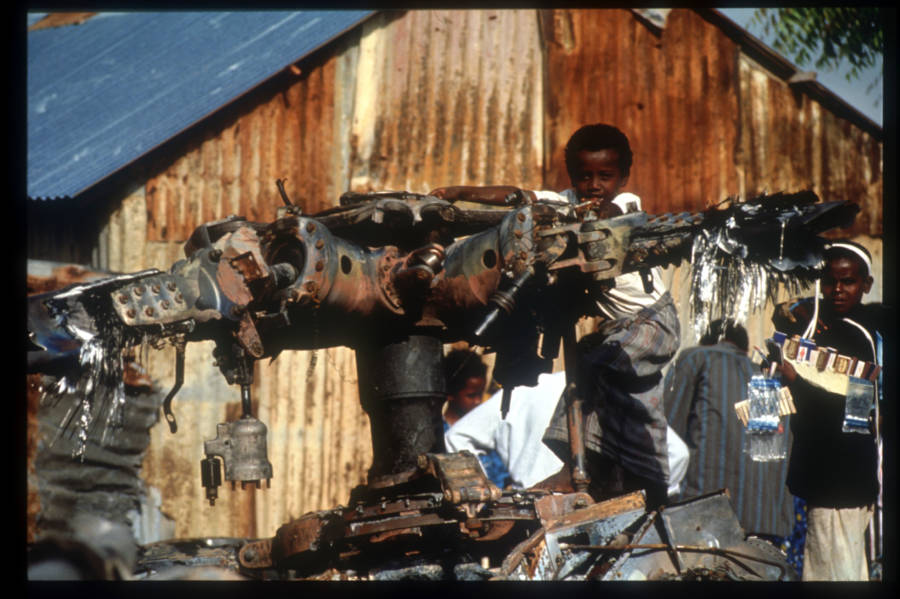 The U.N. withdrew from the country in 1995 and Aidid was dead a year later. Though the brave efforts of those few men at the Battle of Mogadishu will be memorialized by the movie as well as the book, Somalia remains an unstable place.

After this look at the Battle of Mogadishu and the true story of Black Hawk Down, check out the true story behind Napalm Girl. Then, experience the true horrors of war with these Vietnam War facts.