The photo of "Napalm Girl'' depicting nine-year-old Phan Thi Kim Phúc running from a South Vietnamese airstrike shocked the world in 1972. But there's a lot more to her story. 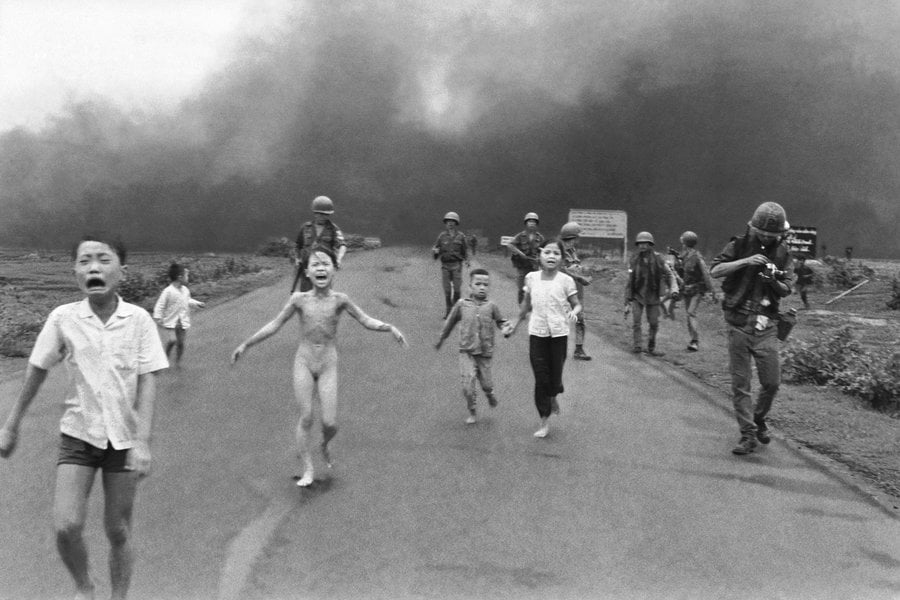 Among history’s most influential photographs is the haunting image of “Napalm Girl” Phan Thi Kim Phúc, a then-9-year-old caught in a moment of desperation during the Vietnam War in 1972. The disturbing image of the screaming and terrified child has since become a symbol for anti-war protests the world over.

Captured by Associated Press photographer Nick Ut outside the village of Trang Bang on June 8, 1972, “Napalm Girl” burns into memory the moment a South Vietnamese Army Skyraider dropped the volatile chemical napalm on civilians like Phúc and her family after being mistaken for the enemy.

Now, the image has inspired Phúc herself to become an outspoken advocate for peace. “That picture has become a powerful gift for me,” Phúc told CNN ahead of the photograph’s 50th anniversary in 2022, “I can (use it) to work for peace, because that picture has not let me go.”

This is the story of the Napalm Girl — the image and the woman behind it — who galvanized history.

The Futility Of The Vietnam War 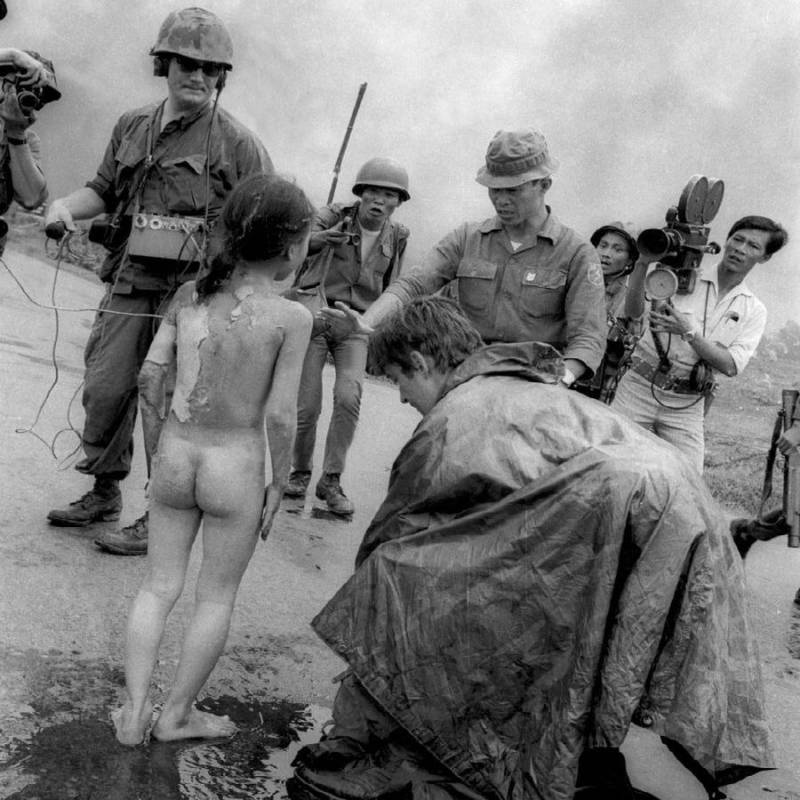 AP/Nick UtStanding in a puddle of water that has been poured over her burns, Phan Thi Kim Phúc is filmed by an ITN news crew.

America’s war in Vietnam was coarse and brutal, even by the standards of 20th-century warfare. By 1972, the U.S. had been meddling in Vietnam’s affairs for decades, and half of that time had seen three times the munitions used in all theaters of World War II dropped over an agrarian country the size of New Mexico.

For a decade, the world’s most powerful air force dropped every explosive and incendiary known to man, along with a hefty dose of dioxin-based herbicide, on (mostly) South Vietnamese targets. On the ground, armed troops ranging from greenhorn Marines to throat-slitting commandos in the Studies and Observations Group that killed an estimated two million Vietnamese people.

But what seemed to make the war in Vietnam uniquely horrible was the sheer pointlessness of it all.

As early as 1966, senior war planners at the Pentagon knew there was no focus and no plan for victory there. By 1968, many Americans knew it too — as evidenced by the thousands of anti-war protestors who took to the streets.

And by 1972, U.S. leadership had enough, too. By that time, President Nixon had steadily shifted much of the burden of defense onto the government in Saigon, and the end was finally in sight.

Perhaps the timeframe in which the photo of the Napalm Girl was taken best encapsulates the futility of the war. Just a year after the terror was captured on film, the United States and North Vietnam came to a shaky ceasefire. Yet the war continued between Saigon and Hanoi. 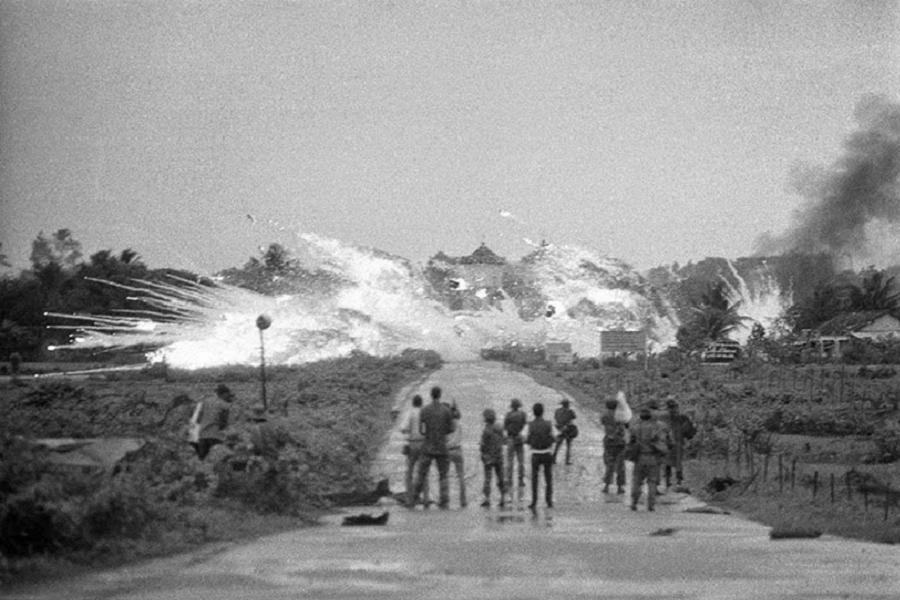 Wikimedia CommonsA tactical airstrike douses the area near the Buddhist temple in Trang Bang with napalm.

On June 7, 1972, elements of the North Vietnamese Army (NVA) occupied the South Vietnamese town of Trang Bang. There they were met by ARVN and the Vietnamese Air Force (VAF). In the three-day battle that ensued, NVA forces entered the town and used the civilians for cover.

Kim Phúc, her brothers, several cousins, and many other civilians took shelter in the Buddhist temple on the first day. The temple developed into a kind of sanctuary, where both ARVN and the NVA avoided fighting. By the second day, the temple area was clearly marked so that VAF strikes outside of town could avoid it.

ARVN was holding in place outside the town, while NVA fighters were shooting from cover inside and between civilian buildings. VAF tactical strike aircraft were working under strict rules of engagement and operating with colored smoke markers on the ground to guide their attacks.

Despite the reports that ARVN or VAF units were “ordered” to strike the village by an American officer, no attempt was made to bomb the town itself, nor were any American officers present to give orders. Meaning that from start to finish, the incident at Trang Bang was a Vietnamese operation.

It was on day two as fighting got closer to the temple that some of the adults decided to flee. Led by a monk, a small group of townspeople, including Kim Phúc, ran into the open toward ARVN forces. Many of the people were holding bundles and other equipment in their hands, and some were dressed in ways that could be mistaken from the air for either NVA or Vietcong uniforms.

An airstrike happened to be inbound just as Phúc’s group broke into the open. The pilot of a strike aircraft, flying in at around 2,000 feet and 500 mph, had seconds to identify the group and decide what to do. He seemed to have assumed that the group were armed NVA, and so he dropped his ordnance on their position, dousing several ARVN soldiers with burning napalm and killing Kim Phúc’s cousins.

While Phúc was spared from the worst of the attack, being ahead of the affected area, some napalm did make contact with her back and left arm. It set her clothes on fire, and she stripped them off as she ran.

“I turned my head and saw the airplanes, and I saw four bombs landing down,” said Phúc. “Then, suddenly, there was the fire everywhere, and my clothes were burned up by the fire. At that moment I didn’t see anybody around me, just fire.”

Phúc reportedly screamed, “Nóng quá, nóng quá!” or “Too hot, too hot!” before reaching a makeshift aid station where several photographers were waiting.

One of them, a 21-year-old Vietnamese national named Nick Ut, snapped the famous Napalm Girl photo immediately before Phúc reached the station. There, aid workers — including Ut — poured cool water over her burns and transported her to Barski hospital in Saigon.

“When I took the photo of her, I saw that her body was burned so badly, and I wanted to help her right away,” Ut recalled. “I put all my camera gear down on the highway and put water on her body.”

Burns covered roughly 50 percent of the child’s body, and doctors at the hospital were grim about her odds of survival. Over the next 14 months, Phúc received 17 surgeries, but she was left with serious restrictions in her range of movement that would last for a decade until receiving reconstructive surgery in West Germany in 1982.

Meanwhile, Ut’s photo appeared in The New York Times the day after it was taken and went on to win a Pulitzer for outstanding photojournalism. 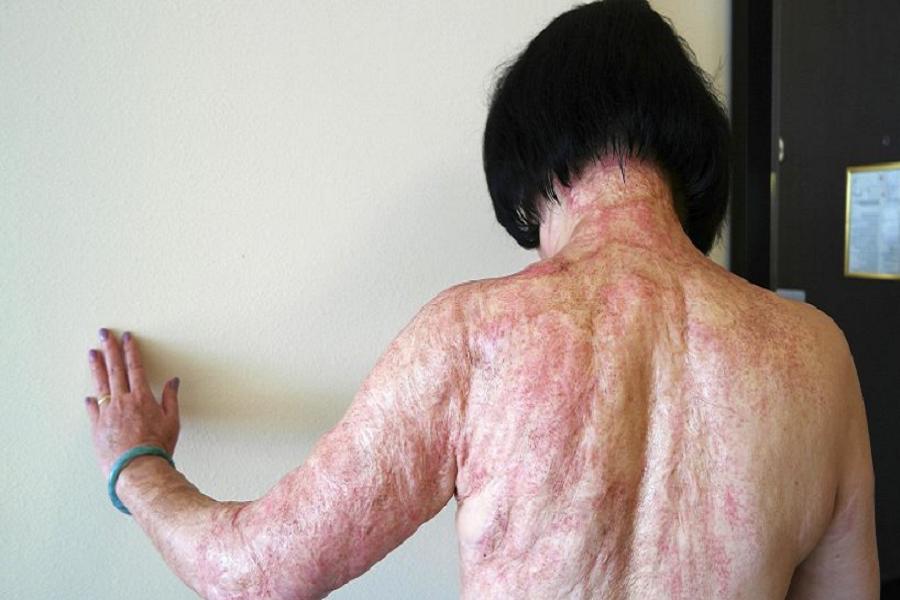 Abend BlattKim Phúc displays her lingering scars from the incident that changed the course for her life.

By the time Phúc was released from the hospital first time, the war was reaching its end. Early in 1975, North Vietnamese forces surged across the DMZ for one last push against the South Vietnamese government.

In part due to images like Napalm Girl, the U.S. Congress spurned the South’s desperate plea for assistance. That April, Saigon fell for good, and the country was finally unified under the Communist government of the North.

A few years later, Vietnam invaded Cambodia to crush the regime of Pol Pot and the Khmer Rouge. After that, peace mostly prevailed in Vietnam, though it remained a militarized state that was prepared for war at any time — and very interested in propaganda victories over its many enemies.

In the early 1980s, the Hanoi government discovered Phúc in her native town. She and her family had recently converted from their traditional shamanistic religion to Christianity, but the officially atheist government opted to overlook the small thought crime for a propaganda coup.

Kim was brought to the capital for meetings with high-level government officials and made a few television appearances. She even became a sort of protégé of Vietnamese Prime Minister Phạm Văn Đồng.

Through his connections, Phúc got the treatment she needed in Europe and permission to study medicine in Cuba.

Throughout this period, she made frequent public statements and appearances on behalf of the Hanoi government and very carefully avoided mentioning that the plane that dropped the bombs had nothing to do with American forces. Doing so reinforced the narrative that the United States had deliberately bombed her helpless village. 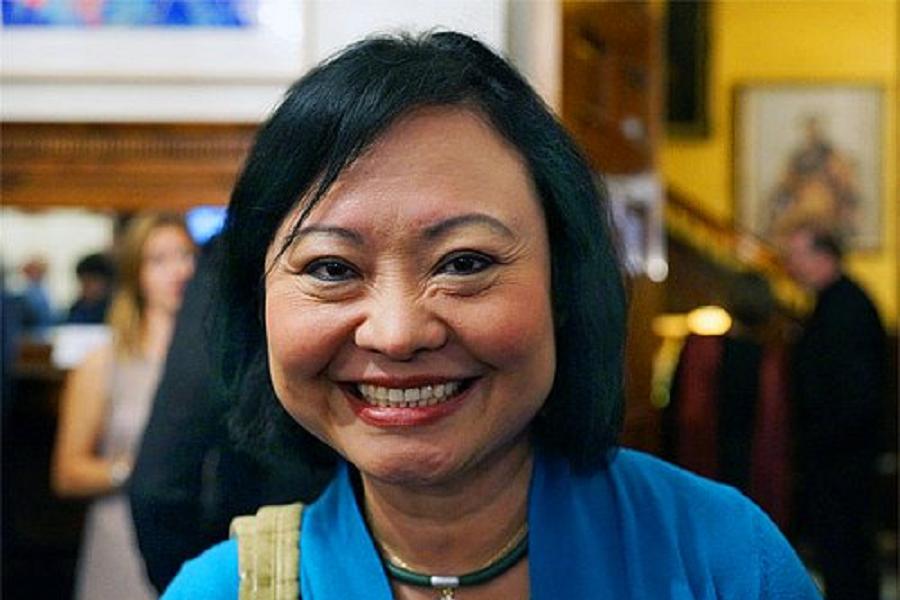 In 1992, a 29-year-old Phúc and her new husband, a fellow Vietnamese University student she met in Cuba, were granted permission to spend their honeymoon in Moscow. But during a layover in Gander, Newfoundland, the pair instead walked out of the international transit area and asked for political asylum in Canada.

After a decade of working for the communist government of Vietnam, the Napalm Girl had defected to the West.

Almost as soon as Phúc received permission to stay in Canada as a political refugee, she began booking paid appearances as Napalm Girl during which she offered missives about peace and forgiveness.

In 1994, Phan Thi Kim Phúc was named a Goodwill Ambassador for UNESCO. In this capacity, she traveled around the post-Cold War world giving speeches. In 1996, during a speech at the Vietnam Veterans’ Memorial Wall in Washington, D.C., she spoke about forgiveness to massive applause from the crowd.

During the event, a “spontaneous” note was passed to her on stage, which read: “I am the one,” referring, apparently, to the “American pilot” in the audience who supposedly felt so moved that he had to confess to flying the fatal mission.

Newly ordained Methodist minister John Plummer then stepped forward, gave Phúc a hug, and was “forgiven” for ordering the bombing of the Trang Bang temple that day. Later, the pair met in a Washington hotel room for an interview with a Canadian documentary crew.

In reality, the entire event was staged by Jan Scruggs, founder and President of the Vietnam Veterans Memorial Fund. It was later conclusively demonstrated that Plummer had been over 50 miles away from Trang Bang on the day of the bombing and that he never had any authority over VAF pilots.

The End Of The Road 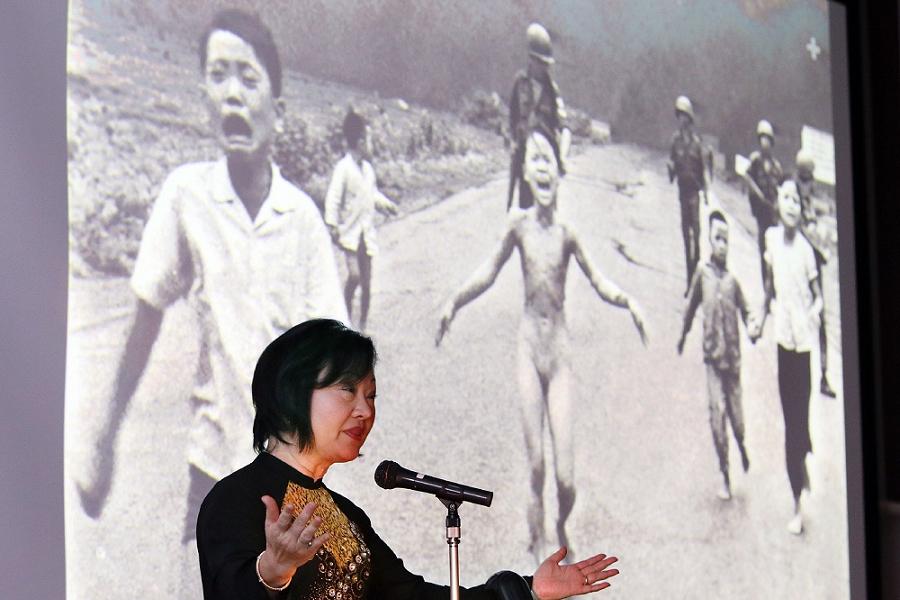 JIJI PRESS/AFP/Getty ImagesNow in her 50s, Phan Thi Kim Phúc continues to give speeches, almost always as “The Girl In the Photograph.”

Kim Phúc has since settled into a comfortable middle age with her husband in Ontario. In 1997, she passed the Canadian citizenship test with, reportedly, a perfect score. Around the same time, she started a nonprofit to promote world peace and help children affected by conflict.

She became the subject of an adoring hagiography by Denise Chong, The Girl in the Picture: The Story of Kim Phúc, the Photographer and the Vietnam War published by Viking Press in 1999.

Nick Ut has recently retired from journalism after 51 years and multiple awards. Like Phúc, he has also relocated to the West and now resides peacefully in Los Angeles.

Many members of Phúc’s family, some pictured in the photograph that made her famous, still live in the People’s Republic of Vietnam.

Although the image was an embarrassment to Phúc for some time, saying it “really affected my private life” and that it made her want to “disappear,” she has said that she has made peace with it. “Now I can look back and embrace it,” Phúc told CNN.

“I’m so thankful that (Ut) could record that moment of history and record the horror of war, which can change the whole world. And that moment changed my attitude and my belief that I can keep my dream alive to help others.”

For more of the stories behind iconic historical photos like “Napalm Girl,” check out our articles on the Saigon Execution or Migrant Mother.