The photograph of a South Vietnamese general executing a young Viet Cong fighter during the Tet Offensive shocked the world. Details that didn't make the papers paint a different story. 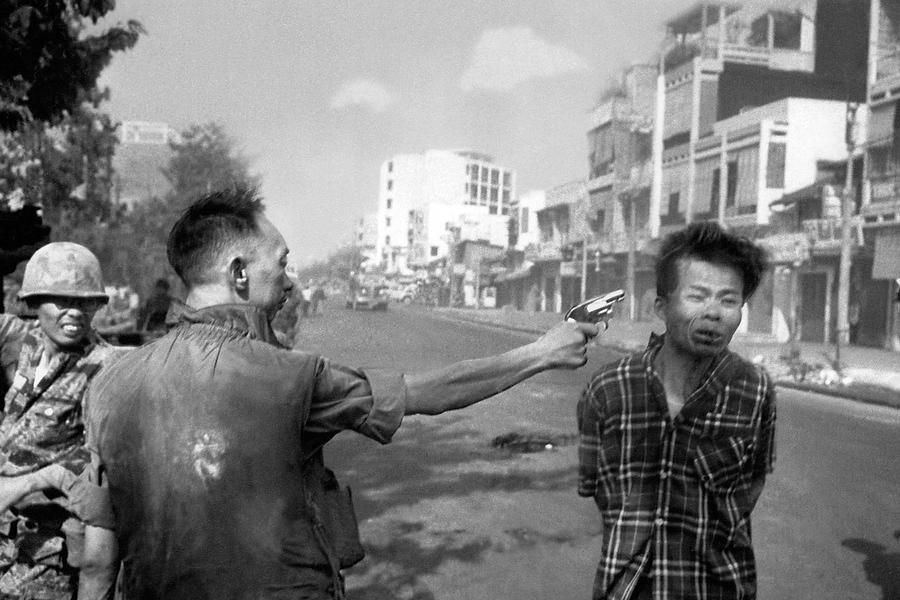 It was one of the most iconic photos of the Vietnam War. At the height of the 1968 Tet Offensive, while prisoners were being rounded up in Saigon, General Nguyễn Ngọc Loan casually strolls over to a young man and shoots him in the temple.

The photo, taken with one-in-a-million perfect timing as the bullet entered the man’s head, won Eddie Adams the Pulitzer Prize and has been reproduced countless times as an example of the brutality of war, and especially of the American war effort in Vietnam.

However, what most people at the time, and even now, don’t know about the events leading up to the “Saigon Execution” photo paint a somewhat different picture from what the public got at first glance.

“Saigon Execution” In Context: Vietnam In 1968 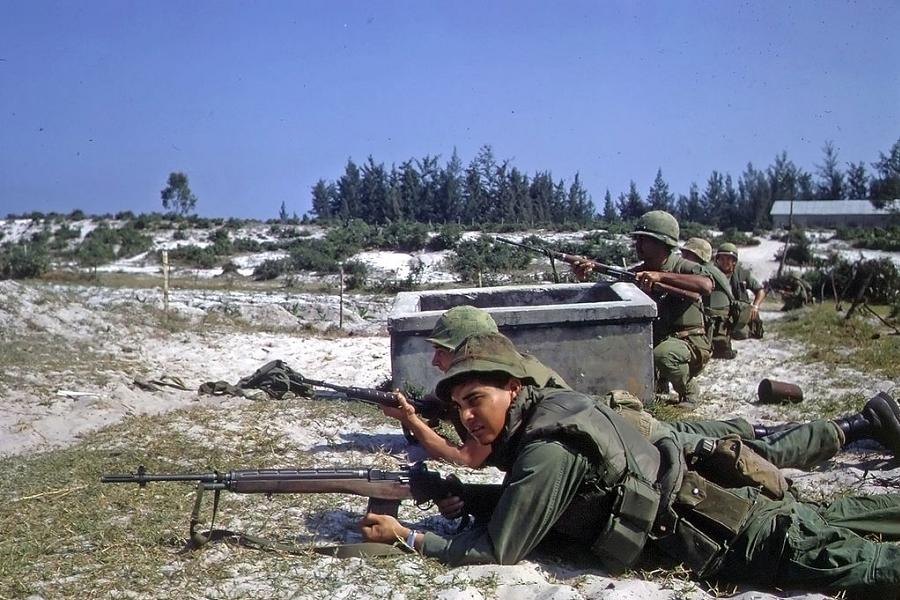 By 1968, America was as deep as it was going to get in the war in Vietnam. For several years, what began as a limited advisory deployment had grown into full-scale combat between US forces and a volatile mix of North Vietnamese regular forces and Viet Cong guerrillas.

The latter operated in the shadows from villages all over South Vietnam, and American intelligence was all but incapable of gauging its strength and locations. From about 1964, however, the Lyndon Johnson administration had maintained the line that resistance was diminishing and that the whole country should be pacified soon.

The Tet Offensive of early 1968 blew those lies out of the water.

All at once, 80,000 communist troops struck more than 100 targets all over the country. It was clear that the guerrillas had a lot of logistical support from areas thought to be loyal to the South, and that everything the brass had been saying about progress toward victory was false.

Early in the attack, Saigon itself was overrun, which gave the Viet Cong the opportunity to cleanse the city of political enemies and settle some old scores. General Loan, as commander of South Vietnam’s National Police Force, was part of the effort to retake the city. 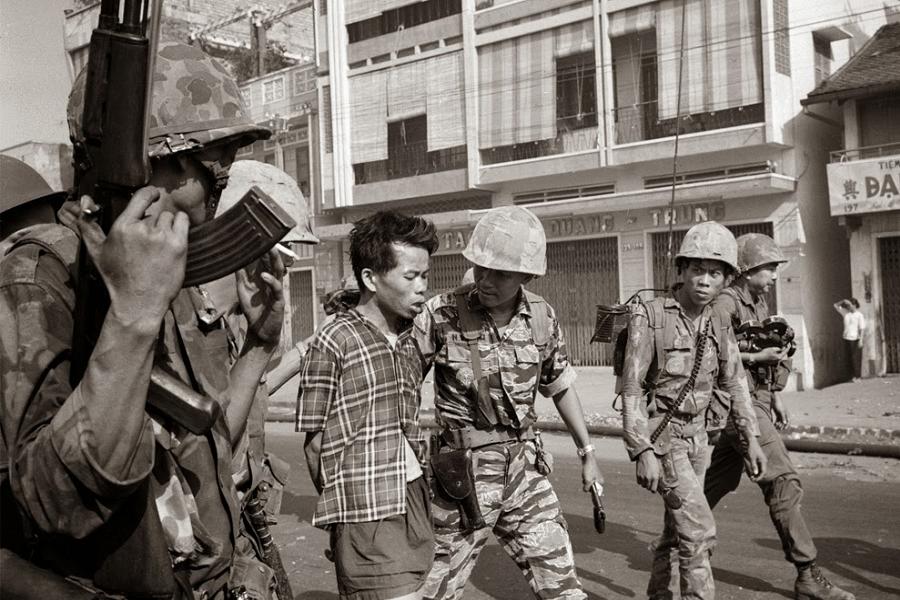 The first thing to know about General Loan is that he was absurdly good at his job. Universally adored by his men, he had led combat operations against the North, both on land and as a pilot, and he had risen to the rank of Brigadier General on merit, rather than by the nepotism common in the Saigon government.

From the war’s earliest days, Loan’s loyalty to his government had marked him as a potential troublemaker even for the Americans, who resented his interference in their operations.

Many times, Loan had intervened to restrict the violence of American combat operations in the Mekong Delta, and he was among the strongest voices in Saigon for asserting South Vietnam’s sovereignty in its dealings with the United States.

He also hated communism with a passion, and he routinely blocked the release of Viet Cong prisoners and secret negotiations that threatened to cut the South out of a peace deal. On the morning of the “Saigon Execution” photo, Loan was leading a police detachment in Saigon looking for at-risk civilians and the Viet Cong who might be a threat to them.

The man being shot in the “Saigon Execution” photo was Nguyễn Văn Lém, also known as Captain Bay Lop, and he was exactly the kind of enemy fighter that Loan’s men were looking for.

According to Lém’s widow, he had disappeared just prior to the Tet Offensive, and according to the soldiers who captured him in Saigon, he was caught practically red-handed leading a Viet Cong hit team tasked with killing National Police members or, if they couldn’t find any, their families instead.

On the morning of the “Saigon Execution” photo, Nguyễn Văn Lém’s death squad had just killed 34 people – seven police officers, two or three Americans, and several police officers’ family members, all bound at the wrists and shot in the head over a pit – and they may have been looking for Loan himself.

Legally, this put Lém in a bad position. He wasn’t wearing a uniform, he wasn’t fighting a battle, and he had evidently committed a major war crime against General Loan’s own subordinates and their kids.

As a war criminal and terrorist, Lém had effectively no protection under the Geneva Conventions and was eligible for summary execution when caught. 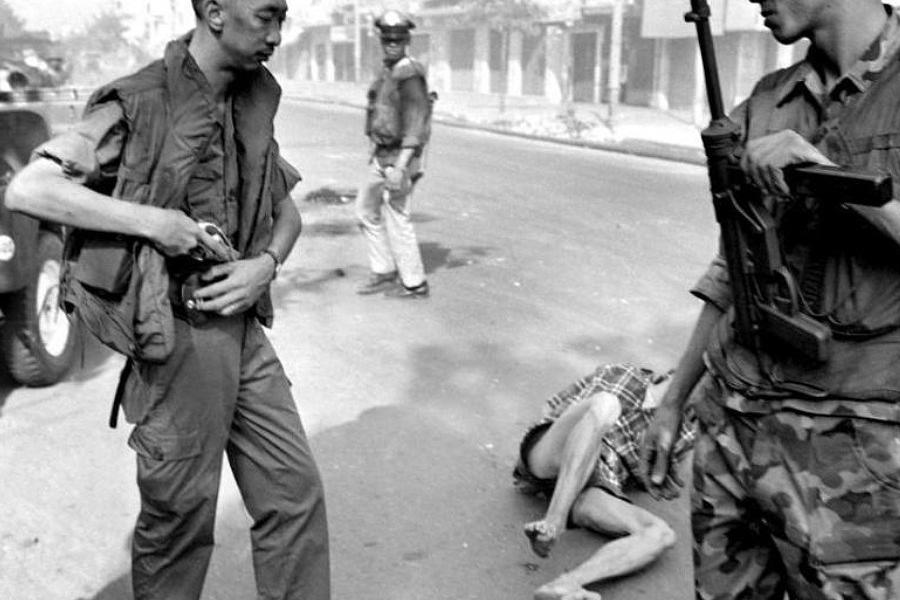 The “Saigon Execution” photo that would become an icon of the anti-war movement in the West was caught largely by accident.

Photographer Eddie Adams was out looking for interesting things to capture that day, and he saw what he thought was an ordinary Viet Cong soldier being dragged out into the street. Figuring a few photos couldn’t hurt, he:

“…followed the three of them as they walked towards us, making an occasional picture. When they were close – maybe five feet away – the soldiers stopped and backed away. I saw a man walk into my camera viewfinder from the left. He took a pistol out of his holster and raised it. I had no idea he would shoot. It was common to hold a pistol to the head of prisoners during questioning. So I prepared to make that picture – the threat, the interrogation. But it didn’t happen. The man just pulled a pistol out of his holster, raised it to the VC’s head and shot him in the temple. I made a picture at the same time.”

The shooting was barely a blip in Loan’s schedule. He led his men through some hard fighting to retake the capital, and that spring he suffered a serious wound. Leading from the front, as usual, Loan took a detachment of men to assault an enemy machine gun position. During the attack, an unlucky burst caught him in the leg.

Australian journalist Pat Burgess was photographed dragging the wounded general back to the safety of a field hospital.

It goes without saying that the general had also been a staunch advocate for building and updating South Vietnam’s hospitals during his career, which now ended with the amputation of his leg.

After The War For Nguyễn Ngọc Loan 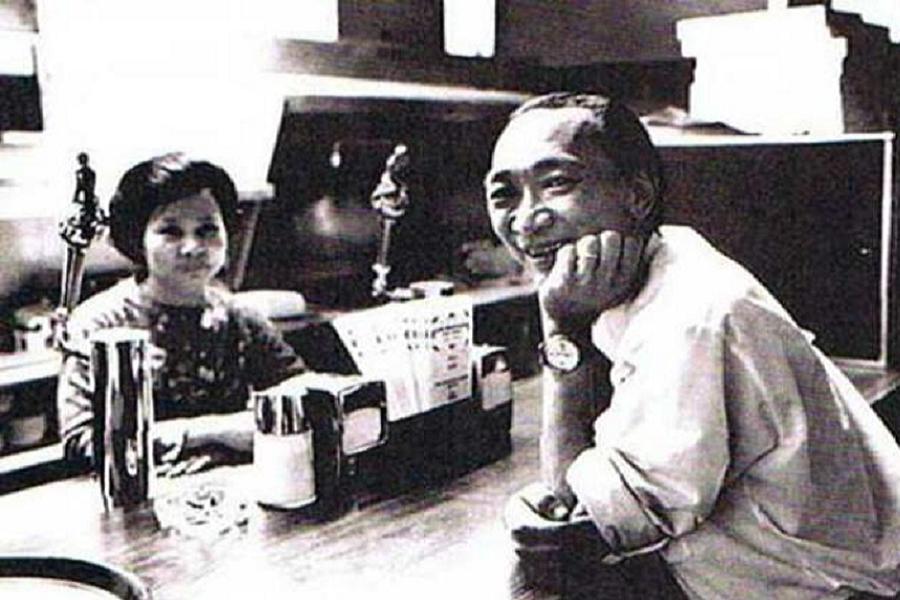 Eddie Adams’ “Saigon Execution” photo made its way into countless papers around the world, stripped of context and presented as a war crime caught on film. Without knowing who the “victim” was or why he was shot, the public was left to assume that he was just a random civilian being murdered by a bloodthirsty sadist.

The furor reached all the way to Australia, where Nguyễn Ngọc Loan was convalescing after his amputation. Public outcry over the picture led an Australian hospital to refuse him treatment, whereupon he traveled to America to recover. In 1975, he left South Vietnam for good, a few days before the country he had served was overrun by the North Vietnamese Army. 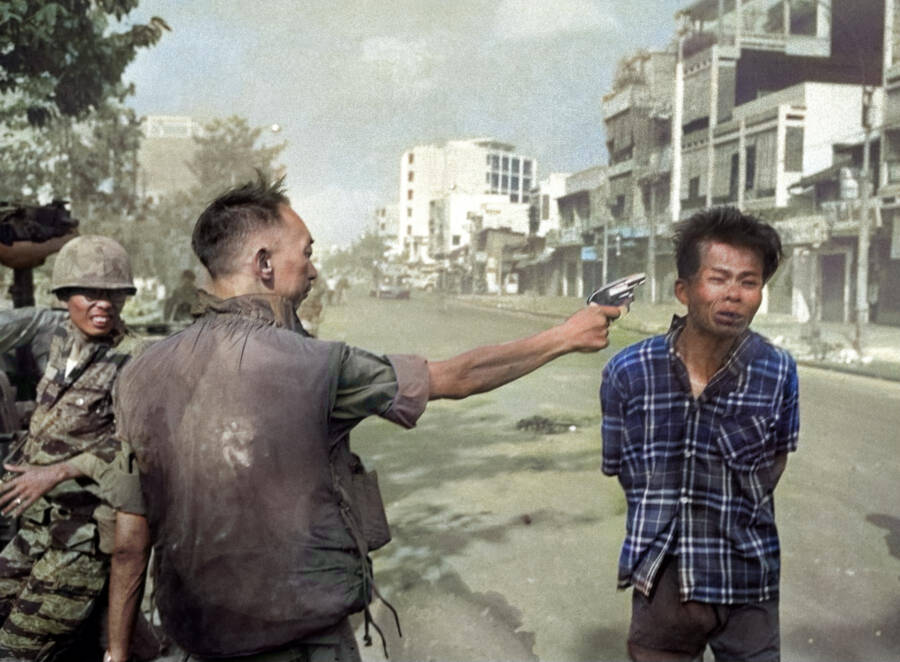 Loan relocated to the United States and opened a pizza restaurant in Virginia.

When word got around about who he was, local people, most of whom knew nothing at all about the context for the picture or what kind of person General Loan was, started making trouble for him. People accosted Loan in his restaurant and threatened his life. Many chose to vandalize his business and leave threatening messages on the stall in his bathroom.

After this look behind the “Saigon Execution”, let these photos of the Vietnam War — and the movements against it — take you back to one of the most volatile moments in American history.