The Dzerzhinskoye Orgsteklo factory has been closed for six years and blue dogs have been seen roaming the area almost ever since. 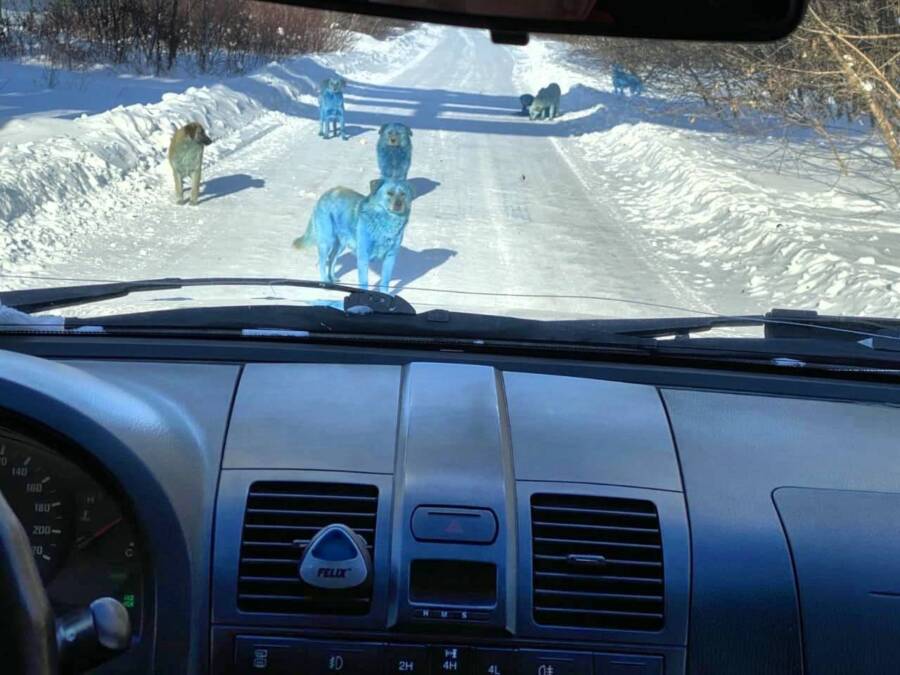 Why so blue? That’s the question people in Dzerzhinsk, Russia started wondering when a pack of bright blue dogs was spotted near a shuttered chemical factory this week.

As the strange pictures spread, so did the demand for answers. Because the dogs were spotted near Dzerzhinskoye Orgsteklo, a network of chemical factories that closed after going bankrupt in 2015, it’s likely that they were exposed to a chemical residue.

The dogs may have rolled in copper sulfate, a bright blue ingredient used in the manufacturing of plexiglass and hydrocyanic acid, which the factory once produced.

Andrey Mislivets, the bankruptcy manager of Dzerzhinskoye Plexiglas agreed that it was likely. “Homeless dogs are running around the area,” he said. “Perhaps, in one of the buildings, they found some kind of chemical residue — copper sulfate, for example, and rolled in it.” 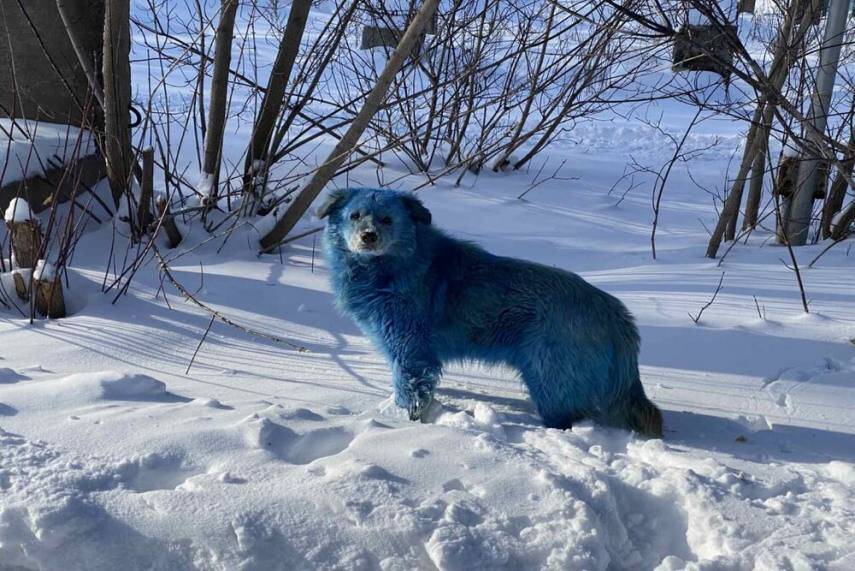 VkontakteOne of the blue dogs spotted in Dzerzhinsk, Russia.

But Mislivets shrugged off responsibility for getting the dogs back to a normal color — or helping to treat any side effects caused by their possible exposure to chemicals. “I cannot bear the costs of capturing homeless animals and their sterilization,” he said.

Russian news agencies reported that the city would round up the dogs. They sought to investigate the canines and treat their blue color, although — according to local officials — the dogs were not in any real danger.

“According to preliminary visual inspection, the dogs are in satisfactory condition,” stated Dzerzhinsk city officials. “Specialists will enter the chemical factory grounds and find and examine the animals.” 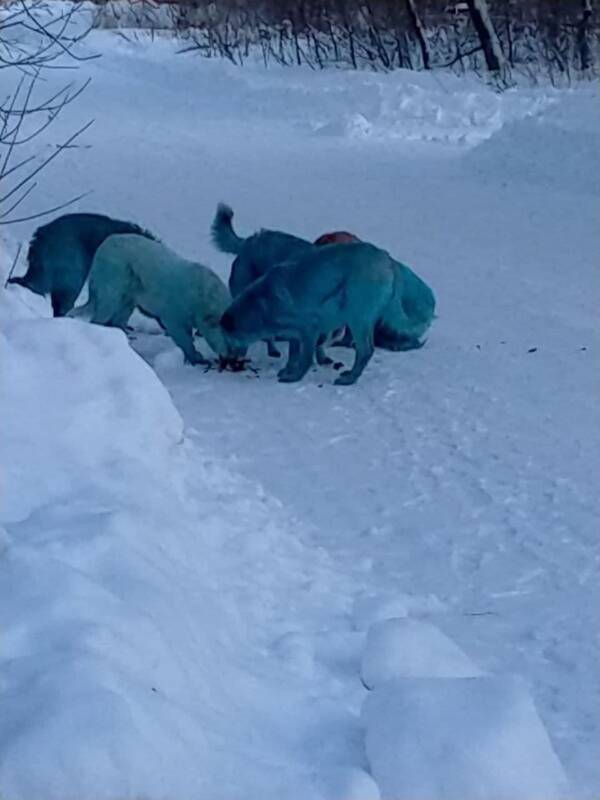 VkontakteRussian officials collected the dogs and examined them for any health issues.

However, other animal rights activists weren’t so sure that the dogs were actually safe and healthy. Kelly O’Meara, Humane Society International’s vice president of companion animals called the blue color of the dogs “an obvious welfare issue.”

O’Meara further explained, “The dye on their fur implies they have had direct contact with or even ingestion of potentially toxic or harmful substances. This could result in painful skin burning or itching or internal bleeding and illness that could lead to death, without veterinary intervention.”

Footage of some of the blue dogs that have been rounded up to this point.

Humane Society International has branches across the world — but little engagement with Russia, which O’Meara feels could do better when it comes to stray animals. “To date, authorities in cities across Russia have not implemented effective, humane strategies to address their street dog populations, and can often resort to cruel and ineffective methods of control,” O’Meara said.

She also encouraged robust sterilization and vaccination programs to help ensure the welfare of stray animals.

Shortly after the Dzerzhinsk blue dogs were reported, Russian news outlets began posting stories of yet another colorful bunch of canines — this time, green — in Podolsk, near Moscow. Fortunately, these dogs seemed to have merely rolled in some non-toxic dried paint.

Oddly, sightings of bizarrely-colored dogs have happened before. In August 2017, for example, a dozen blue dogs were spotted in Mumbai, India.

In the Mumbai case, about a dozen dogs turned blue because a manufacturing company was dumping illegal waste into the Kasadi river, where the animals often swam. The dumped waste likely contained blue dye used in detergent and other chemical products.

As a result, the Maharashtra Pollution Control Board shut the factory down. One of the dogs was captured and was judged to be in good health, and the blue tinge of its fur washed off easily. 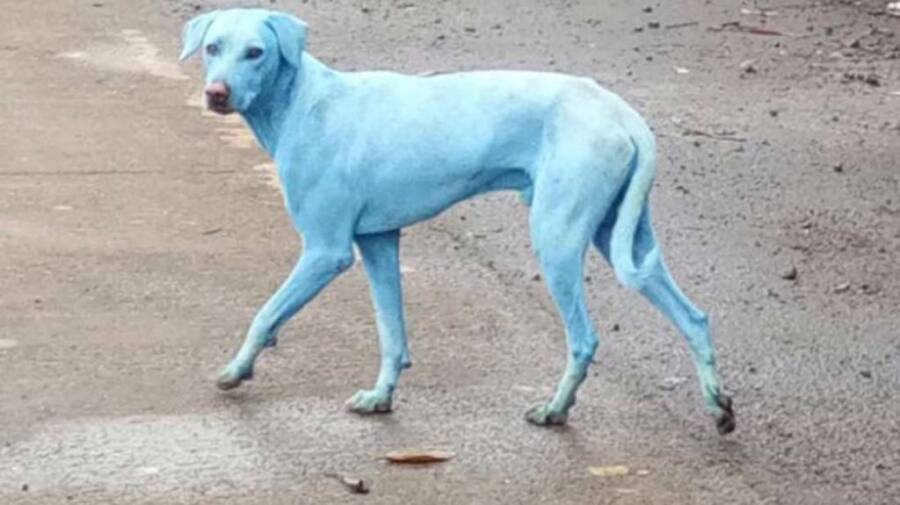 FacebookBlue dogs were also spotted in Mumbai in 2017.

As for the dogs of Dzerzhinsk? It seems that they’ll also be just fine. Seven of the dogs were rounded up and are being examined by veterinarians.

The head of the vet clinic, Ilya Kazakov, said that the dogs seemed to be in satisfactory condition. The cause of their color change, however, remains unknown. The clinic is continuing to investigate what caused the dogs to turn blue. 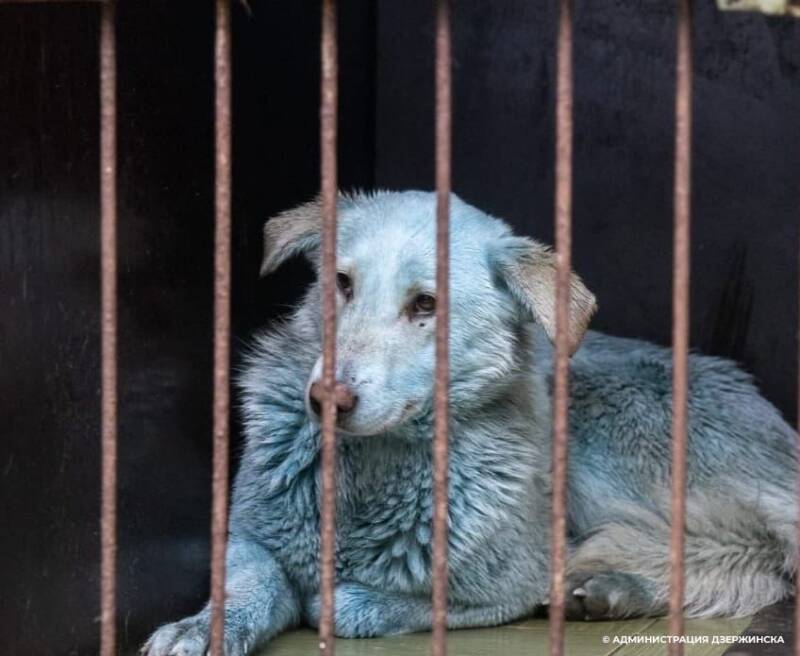 RIA News/TwitterThe dogs were captured and examined. Vets deemed them to be in “satisfactory condition.”

But even without a resolution to the mystery, this story does have a happy ending. For two of the dogs, turning blue might be the best thing that ever happened to them — as a result of their bizarre tinge, they’ve been adopted and finally found a home.