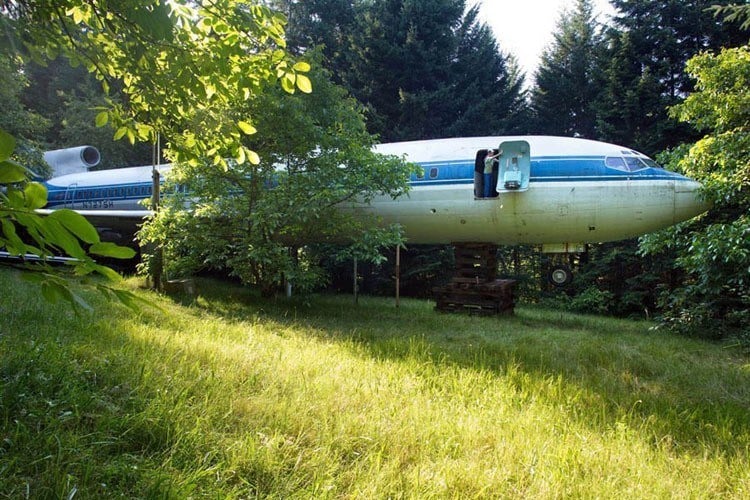 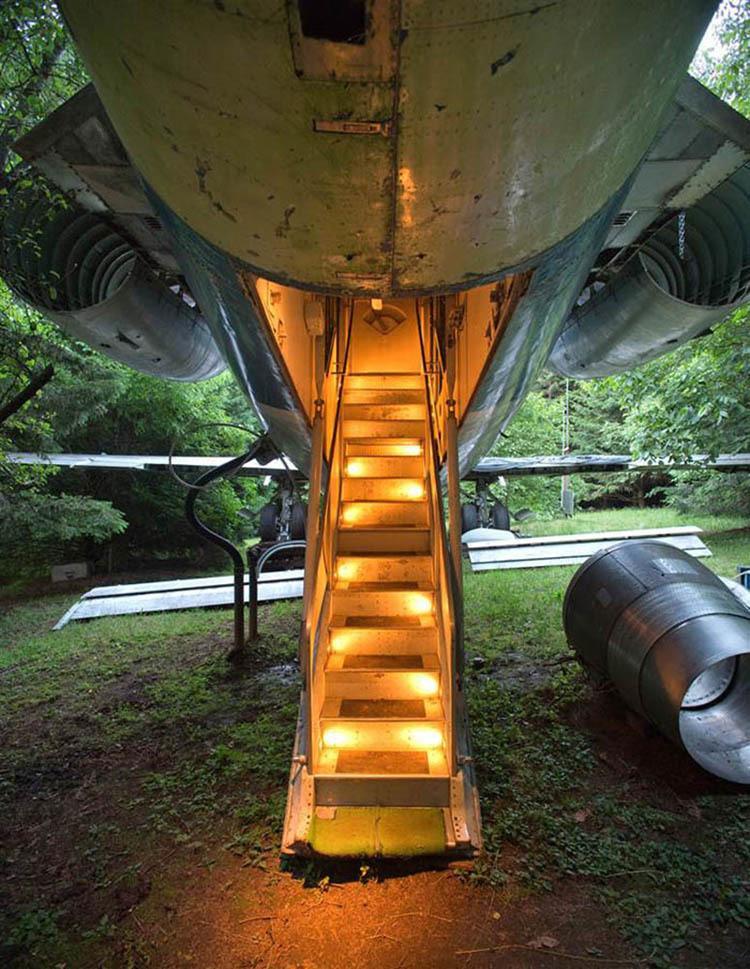 In yet another example of the alternative housing trend, retired electrical engineer Bruce Campbell resides in a Boeing 727 aircraft that he converted into a lofty home, complete with electricity and water.

It’s odd enough for Portland, Oregon residents to stumble across this “home”, let alone to wonder how and why it came to get—and stay—there. That is, unless they encounter Bruce outside his dream retreat. Between power washing the exterior and trimming the dense bushes, this small-plane pilot’s work is never done. 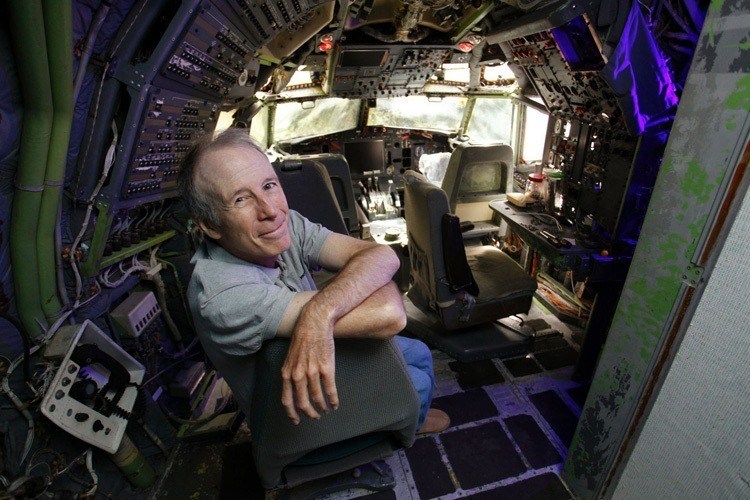 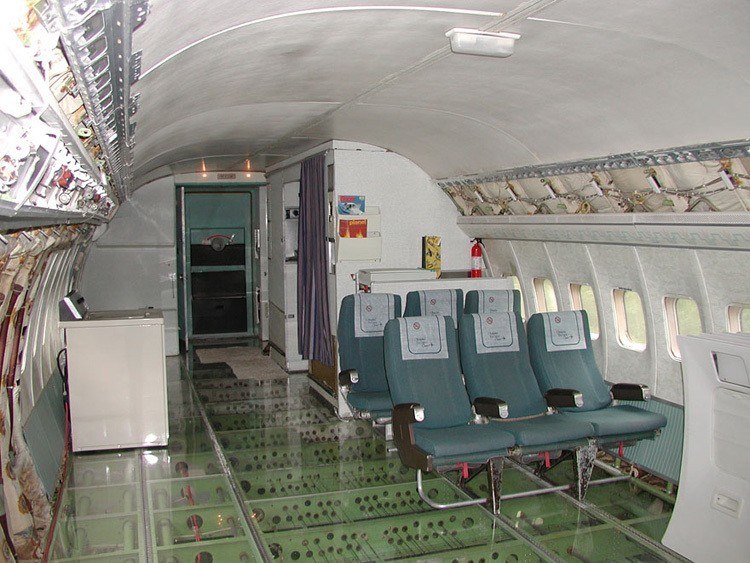 There he would tell them how he purchased the decommissioned aircraft, took it apart piece by piece, and painstakingly reassembled it within the clearing of the trees – offering a bit of practical magical realism to the woods of Oregon. He was barely into his twenties when he bought the 10 acres on which his eccentric home sits. Originally, he thought about constructing a home from freight vans, but in 1999, decided in favor of a plane instead. An old freight van still lurks in the undergrowth nearby.

Campbell’s labor-of-love airplane home is not yet complete, and it’s likely to remain a work in progress. He states that “only one of the bathrooms is functional, and that the kitchen was “thrown together rather hastily” and only consists of a few appliances thrown together.” Life aboard this home is a modest one, but he wouldn’t have it any other way. Especially since building this home means fulfilling a childhood dream.

As Campbell says, the project’s “genesis was sort of a slowly developing element. As a kid I saw videos of aircraft boneyards on TV and the concept sank in early in life and that just slowly evolved into use of a retired aircraft for a home.” 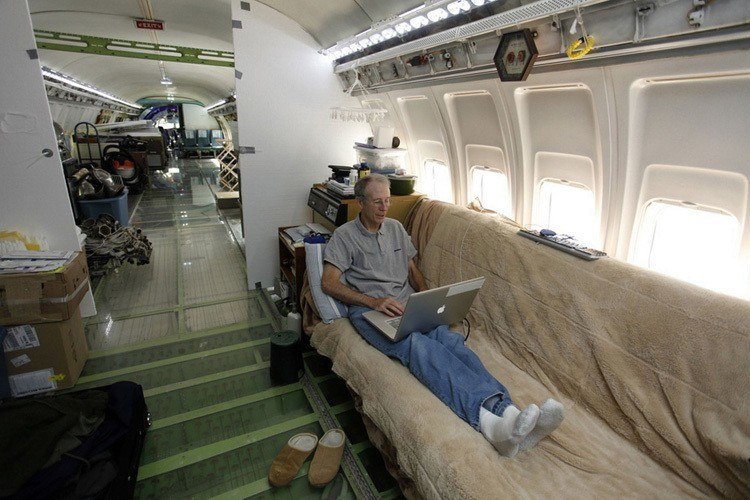 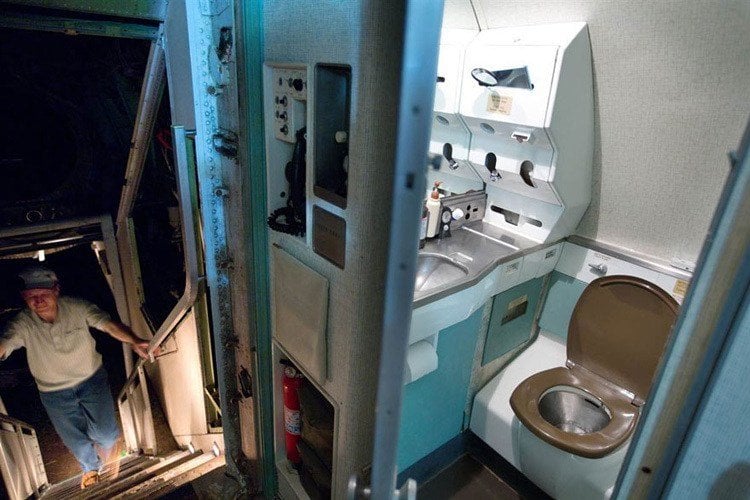 Don’t expect Bruce’s dwelling to ever look like something out of Better Homes and Gardens; his ultimate goal is to reuse most of the airplane’s original parts for what he needs, like using the original water tank and plumbing elements to serve as a makeshift washing machine. He’s a true artist when it comes to resourcefulness and upcycling. 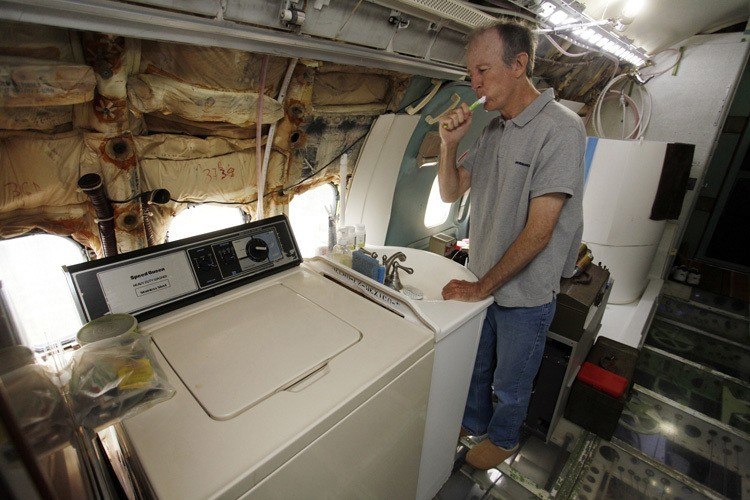 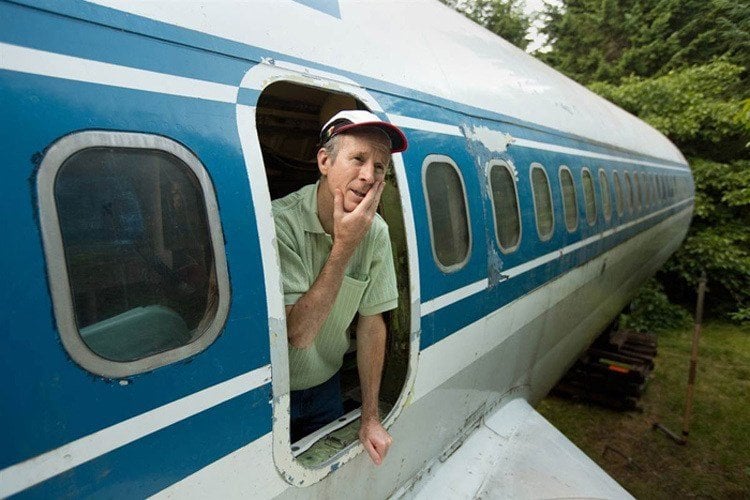 Repurposing old plane parts doesn’t mean the home isn’t comfortable; there’s a living room and an office that has lots of room to tinker around; an activity that Campbell must truly enjoy to be able to fathom taking on a project of this nature. 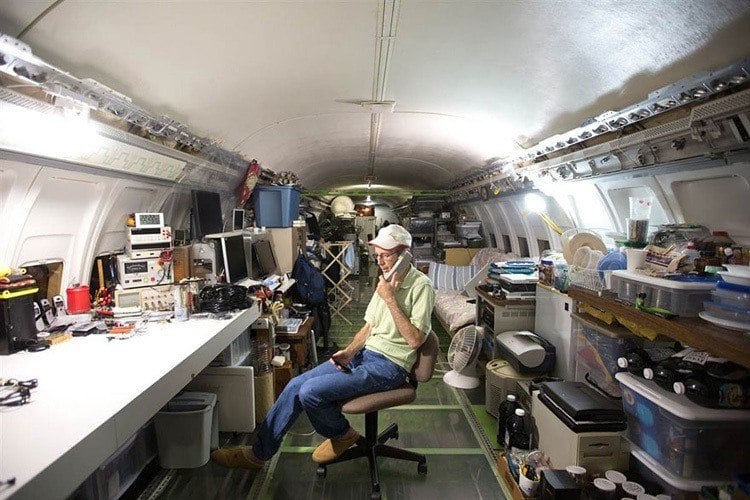 Able to see design potential just about everywhere, Campbell converted one of the wings into a walkout deck, aptly uses the cargo hold for storage, and has even installed a computer screen into the old control panel. At around 1,060 square feet, it’s not as cramped as you may think; its open, studio-like setup contributes to the spacious feeling. 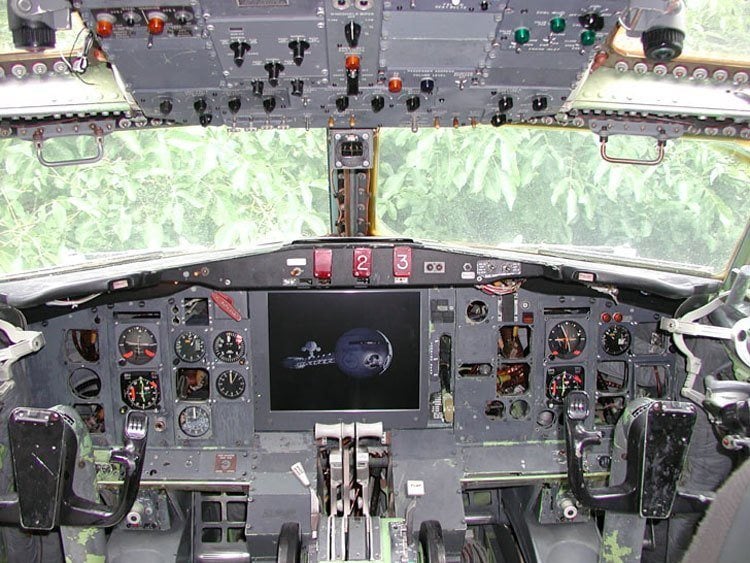 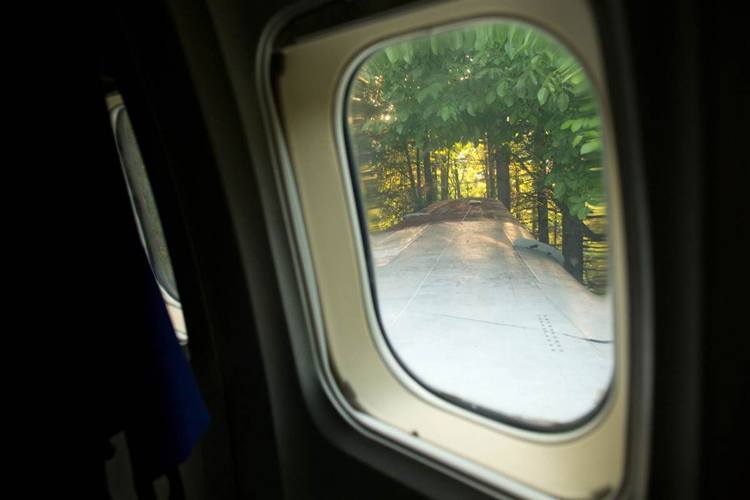 One of the most inspired features of this unique remodel is the clear floors; they let you see the inner workings of the plane’s once functional mechanics. 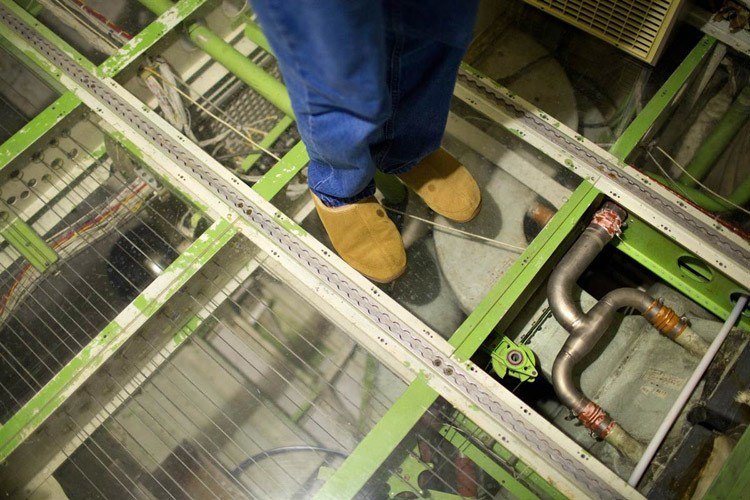 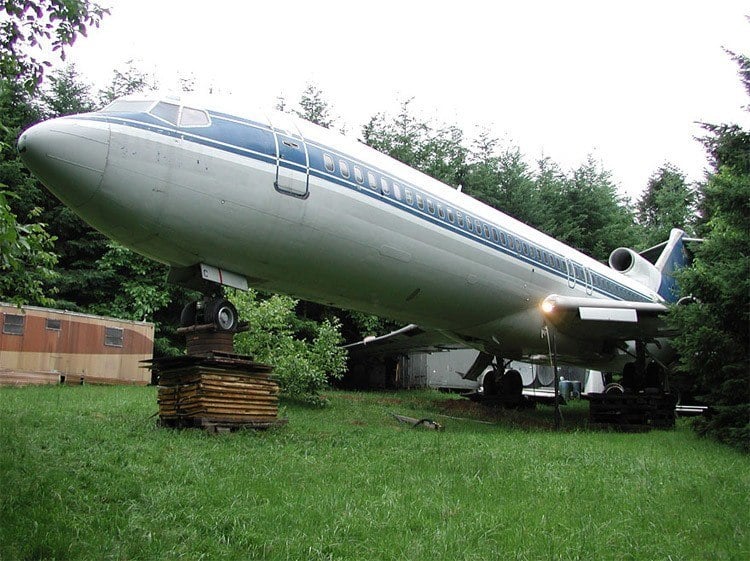 As to the durability of his housing choice, he defends it profusely; “In a nutshell aircrafts are among the finest structures mankind has built,” he said. “They are incredibly strong and able to withstand remarkable insults like high winds, dust and insects. They’re made of modern materials … for the most part they are worlds above wood in longevity … and they are designed with a certain sense beauty,” he added. 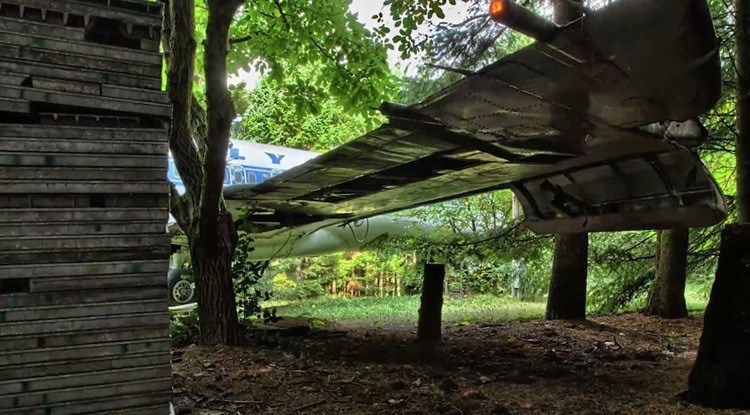 The following short video is a tribute to this home’s majesty against the backdrop of the beautiful Oregon landscape, and was made by a photographer who lives a short distance away from Bruce. You can feel the serenity oozing from your pores: