Officials have dubbed the migration deaths a humanitarian crisis. And it's difficult to say whether the situation will improve anytime soon. 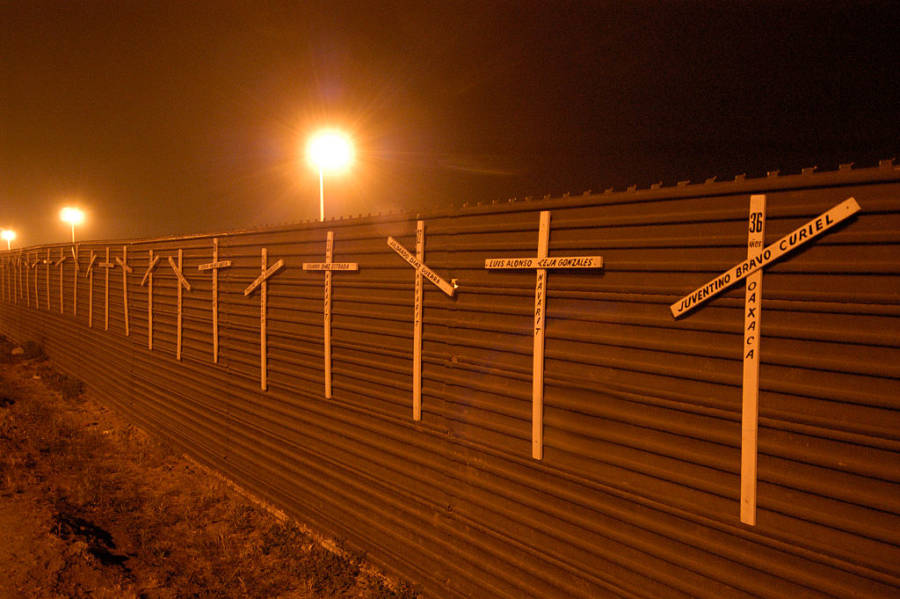 Photo by Christopher Morris/Corbis via Getty ImagesCrosses commemorate the migrants who died while attempting to cross the border fence between the United States and Mexico.

212 bodies and more than 2,000 objects belonging to U.S.-Mexico border crossers sit in a collection at the Texas State University morgue.

There are baseball caps and Bibles, bracelets and stuffed animals — treasures that reminded their owners of the loved ones that they had left behind.

Because the vast majority of this morgue’s occupants are currently unidentified, they’re referred to only by case number. Case 0438, for example, who was buried in a milk crate, has a skull stained from the bandana he was wearing when he died.

The use of case numbers, and not names, is almost fitting for a topic that is so often dehumanized when argued at the national political level.

But Operation Identification is now trying to give the issue a more human face.

“When we get them, we assign them a case number because we have to have a way of tracking cases, but no one deserves to be just a number,” Timonthy P. Gocha, a forensic anthropologist with the project told The New York Times. “The idea is to figure out who they are, and give them their name back.”

It’s a big project; there are a lot of bodies.

At the national level, more people have died crossing the southern border in the past 16 years than in Hurricane Katrina and the 9/11 attacks combined.

That’s 6,023 recorded deaths in Texas, Arizona, New Mexico, and California, compared to a combined 4,800 between 9/11 and Hurricane Katrina.

At the county level, more than 550 dead undocumented migrants have been found in Brooks County in the last eight years — and those are just the ones reported to police. In the past year alone, more than 75 bodies have been recovered by county police.

“I would say for every one we find, we’re probably missing five,” the local sheriff said.

At the personal level, individual ranchers have grown accustomed to stumbling across deteriorating corpses. Since 2014, nine bodies have been found on one ranch, 17 on another, 31 at a third.

Most of the immigrants died from dehydration, heatstroke, or hypothermia.

One Texan medical examiner, who has looked at the corpses 171 migrants since 2016, now keeps a Latin phrase hung above the receptionist’s desk: “Let the dead teach the living.”

Officials have dubbed the migration deaths a humanitarian crisis. And it’s difficult to say whether the situation will improve anytime soon.

The Trump administration’s approach to illegal border crossings does seem to have deterred some potential migrants.

But even with the hostile political environment in the U.S., the immigrants are still making the journey as they flee gang violence, severe poverty, and hunger back gome. The number of bodies found in the first four months of 2017 already equals the number found in the entirety of 2010.

“You don’t migrate now in search of the American dream,” one Honduran migrant told the Times. “You go for your life.”

Next, read about how Americans are more likely to be killed falling out of bed than by a jihadist immigrant. Then, learn why most Texans oppose Trump’s border wall.