Until the mid-20th century, colonial powers made these films to convince Africans that they deserved to be oppressed. 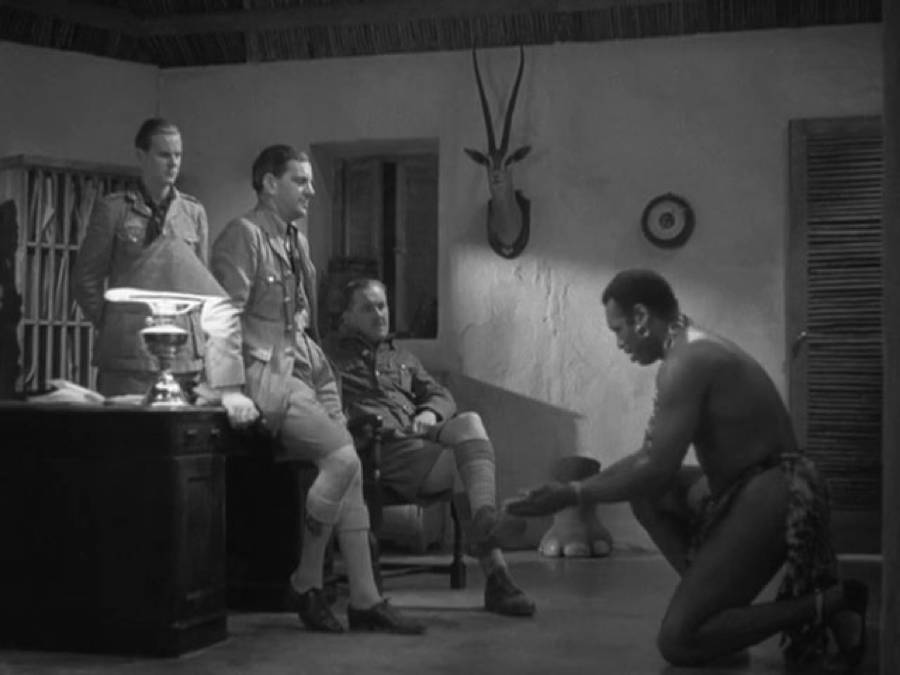 London Film Productions, Ltd.A still from Sanders of the River (1935).

Starting in the 1890s, when the Lumière brothers pioneered the medium as we know it today, the motion picture embarked upon a long journey from obscure invention that no one knew how to monetize into the predominant medium for mass communication and global entertainment.

As motion pictures spread from the brothers’ native France throughout Europe, the United States, and eventually the rest of the world, its path took some unusual twists and turns. The use of film as an instrument of oppression by authoritarian leaders and foreign occupiers marks one such twist.

Many are aware that film was used as a propaganda tool in Nazi Germany in order to bolster nationalism among the German people. Hitler was an avid fan of the cinema, and his head of the Ministry of Propaganda, Joseph Goebbels, sought to push the boundaries of film as a means of psychological control. Similarly, film was used to propagate communist ideals during the Bolshevik revolution in the Soviet Union.

Nazi and Bolshevik applications of film as propaganda resulted in several well-known films that are widely studied by film students and media scholars to this day, including Triumph of the Will from Nazi Germany and Battleship Potemkin from the Soviet Union.

However, a lesser-known instance of cinema as a means of oppression occurred throughout British-occupied Africa in the early to mid-20th century, when the colonialist British Empire used film to control, subdue, and coerce the African populace that they were exploiting.

Using film in this way appealed to the British for a number of reasons, including the traditional motivating factor for propagandists: the ability to encourage certain behaviors and discourage others in their audience. Specifically, the leaders of the British colonies in Africa, called governors, felt that film had great potential to persuade and educate the masses, as demonstrated by the following excerpt from a resolution passed by the Conference of Colonial Governors in 1930:

“The Conference is convinced that the cinematograph has very great possibilities for education purposes in the widest sense not only for children but also for adults, especially with illiterate peoples. The Conference also considers it is desirable to foster in every way the market for good British films.”

In truth, by “education,” the resolution is actually referring to the British desire to encourage Africans to adopt British cultural norms, embrace Christianity, speak English, and convince Africans of white racial superiority. Furthermore, the British had a hands-off approach to ruling in that they did not want to actually mix with Africans, and thus they saw film as another way to assert control from afar.

Additionally, the comment above about the film “market” was a reaction to American dominance in the international film market following World War I, during which time the United States flooded foreign countries with Hollywood films while most of Europe was still reeling from the physical and economic damage incurred on their soil during the war.

Not only was this tactic bad for the British economically, but they also feared that Hollywood films in Africa could undermine their efforts to assert racial dominance. Regional control by British colonialists in Africa relied heavily on race-based systems of subjugation, and the British feared that if Africans could see white actors committing criminal and unsavory acts in Hollywood films, convincing them of white moral superiority would be a much more difficult task.

Thus, the British saw, in film, the opportunity to make money for their homeland while convincing their subjects that the British colonial presence was a blessing. So, in 1931, British United Film Producers Co. was established.

The company often cast non-professional African actors in their productions, and filmed on location in Africa, as in the 1935 film Sanders of the River (above). The film, starring famed African-American singer and and stage actor Paul Robeson and directed by Zoltan Korda, embodies many of the most disturbing aspects of British colonial film. Opening title cards, for example, refer to British colonialists in Africa as “Keepers of the King’s Peace,” and the expository card that follows basically sums up the entire thesis of the film:

“AFRICA… Tens of millions of natives under British rule, each tribe with its own chieftain, governed and protected by a handful of white men whose everyday work is an unsung saga of courage and efficiency.”

One could stop watching there and essentially get the film’s gist, but Sanders is a feature-length, high production value journey into the psyche of British colonialists, providing insight into just how severely they looked down upon their African subjects. As would become a common theme in British colonial films, Africans in the film are portrayed either as naive children in need of protection or as dangerous, vaguely animalistic proto-people who must be subdued.

In the long run, Sanders of the River and films like it were intended to persuade Africans to view British occupiers as patriarchs rather than invaders. Other films made by colonialists, however, pursued less “lofty” goals, such as teaching English to Africans.

In the aptly-titled I Will Speak English (below), made by the Gold Coast Film Unit in 1954, for example, an African man in European clothes gives a rudimentary English lesson to a classroom full of adult Africans, dressed in traditional clothes.

The 14-minute film contains little in the way of plot, and will be difficult to watch in its entirety for most viewers with modern attention spans. Nothing happens besides a basic English grammar lesson. Despite the simple story, the film’s structure is deceptively complex; parts of it feel engineered to take root in the subconscious, such as when the instructor, looking just barely off-camera, slowly enunciates, “I take great care to speak slowly and clearly.”

As I Will Speak English shows, British colonialists continued to make films intended to influence the behavior and psyche of Africans into the middle of the 20th century. Some films, such as Boy Kumasenu (below), emphasized economic growth and urban development experienced in 20th-century Africa, generally crediting these accomplishments to European generosity.

Boy Kumasenu was made in 1952, and was actually more popular among Africans than most colonial films. Though its all-African cast has more agency than African characters in early colonial film, the film still subtly associates Africans with stagnation while conflating Westernization and the effects of colonialism with progress.

Though colonialism did, in fact, bring some economic growth and new trade to Africa, most of the benefits were reaped by Europeans, not Africans. During the colonial era, indigenous people — when they were not outright slaughtered by expanding European armies — had their land taken from them, were forced to work for low wages or meager food rations under brutal conditions, and saw their land stripped of resources while their communities lost traditional languages, cultural practices, and religions.

In his book, Culture and Imperialism, Edward Said, the founder of the academic field of postcolonial studies, states, “neither imperialism nor colonialism is a simple act of accumulation and acquisition… Out of imperialism, notions about culture were classified, reinforced, criticized or rejected.”

The same could be said of colonial films. More than a simple attempt to persuade, they marked an attempt to systematically reshape a culture in a way that encouraged complacency in the face of subjugation and sought to convince millions of subjects that they deserved the devastating conditions imposed by their rulers.

Next, read up on the atrocities of Belgium’s Leopold II, whose Congo Free State represents one of colonialism’s darkest tragedies. Then, see some of the most appallingly racist ads of decades past.