The bufo toad secretes a highly poisonous milky substance when handled or threatened, which can kill cats and dogs and burn people's eyes. 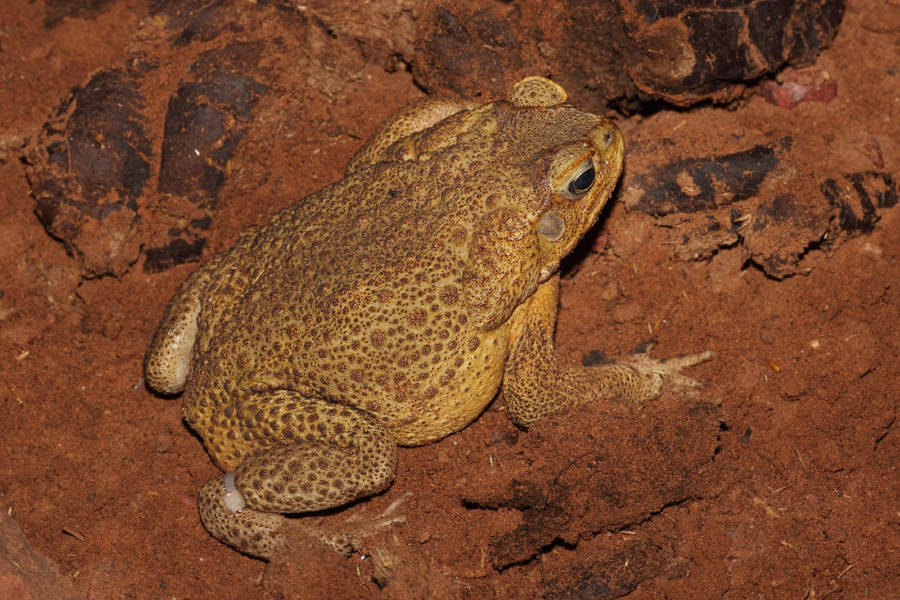 Wikimedia CommonsThe bufo toad, which secretes a toxic substance from the glands on its head.

The Mirabella neighborhood in Palm Beach Gardens, Florida has been overrun by thousands of poisonous bufo toads. These encroaching amphibians have already clogged people’s pools, taken over their patios, and taken to the streets.

According to WPTV, Mirabella residents aren’t sure how this sudden outbreak occurred, but do know that it began about a week ago. For Jennie Quasha, the mere act of walking across her yard has essentially become untenable.

“I just see a massive amount of toads or frogs everywhere, covering every square inch,” said Quasha, who lives in Mirabella. “You can’t even walk through the grass without stepping on one.”

Thousands of toads littering the streets, yards, and pools would be an issue in itself — but experts warn that the bufo toad species can be extremely dangerous, even deadly, to pets and small children alike.

“I’m worried about people’s pets, so there’s definitely not swimming in the pool or playing outside and enjoying the outdoors,” explained Quasha, who contacted the local homeowner’s association for help.

Toad Busters, a regional removal service for poisonous amphibians like these, is confident that this infestation is indeed bufo toad-centric. They also confirmed that these toads are not to be taken lightly and can pose a serious hazard.

“With the warmer winter and then we had two to three weeks ago, a torrential rain, that caused them to go into a breeding cycle,” said Mark Holladay, lead technician at Toad Busters. “They’re not safe for pets or children. If a pet was to ingest too many of them, even at that small size, it would cause a problem.”

In regards to the breeding patterns Holladay explained, this initial outbreak likely won’t be the last — as the bufo toads are now in the middle of a cycle that will soon see a second wave hit Mirabella’s streets.

“There will be another influx like this in 22 days when the next batch hatches out, and this is in every community in Florida,” said Holladay.

For Quasha, all she wants are clear and informed answers. Homeowners like her have no experience with toads — let alone thousands of them that are highly poisonous. Her communications with the Homeowner’s Association ended with the claim that owners needed to take care of their individual toad problems themselves.

“I would like someone to come out who can really identify the species and talk to the neighbors and see what’s going on,” said Quasha. “I want some type of solid answer and hopefully a solution, and if it’s just nature and they go away, that would be wonderful too.”

A WPTV news segment with Dr. Myles Rowley explaining the dangers of the bufo toad.

According to the University of Florida, the Bufo marinus (or Giant Toad, Marine Toad, for Cane Toad) is the biggest of its kind found in the state. While these aren’t indigenous to the U.S., they were used in sugar cane fields to help control the “white grubs” larvae plaguing the crops.

As it stands, the only clear-cut answers currently available regard the facts that these toads are poisonous and that their presence in Florida is possibly tied to an accident in the 1950s.

The toad became irrevocably established in the state when a pet dealer accidentally released around 100 of them at the Miami airport in 1955. The 1960s saw similar accidental releases. Known to eat all kinds of food — even pet food — the frogs are highly predatory and breed year-round.

Perhaps most importantly, particularly for those in the Mirabella neighborhood, the bufo toad secretes a highly toxic, milky liquid from the glands on its head when it feels threatened — or when it’s merely handled. The substance can burn your eyes, irritate your skin, and kill cats and dogs if they ingest it.

Ultimately, Quasha’s preliminary steps of staying out of the pool, avoiding these animals on the yard, and clamoring for support from local organizations are smart ways to stay safe. Hopefully, the community begins countering this issue sooner rather than later — as a second influx is expected soon.

After learning about the poisonous bufo toad overtaking a Florida neighborhood, read about the Nile crocodile invasion of Florida. Then, learn about six really weird pets you could actually own.