Inside The Baffling, Unsolved Case Of The Isabella Stewart Gardner Museum Heist 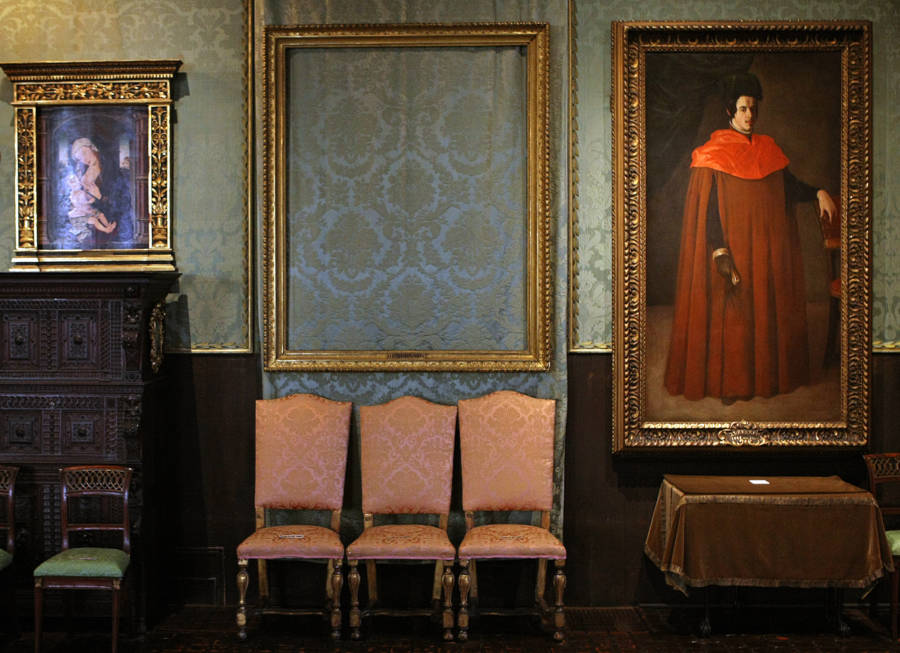 David L Ryan/The Boston Globe via Getty ImagesAn empty frame where Rembrandt’s The Storm on the Sea of Galilee once was placed.

On March 18, 1990, two thieves disguised as policemen broke into a Boston art museum, tied up the guards, and stole 13 paintings right off the walls. The infamous Isabella Stewart Gardner Museum heist has since been hailed one of the most devastating thefts of private property in art history.

Decades later, $500 million worth of masterpieces — Rembrandts, Vermeers, and sketches by Degas — are still missing. In the aftermath of the Boston art heist, authorities considered a complex web of suspects, but the investigation ultimately failed to pin the crime on anyone in particular.

Now, one of the last alleged links to the Isabella Stewart Gardner Museum heist, a mobster named Robert Gentile, has died. Once, he led police to believe that they had the Gardner Museum heist solved, but he took anything he knew about the theft with him to the grave.

Around midnight on March 18, 1990, a Dodge Daytona pulled up to the side entrance of the Gardner Museum. Nearly an hour later, two men emerged from the vehicle in fake police uniforms demanding entry into the museum to investigate “a noise complaint.”

Security guard Richard Abath buzzed the thieves in and was promptly placed under a fake arrest. Though he initially believed the arrest to be real, Abath realized that one of the policemen’s mustaches was made out of wax.

He and a second security guard on duty were bound and brought into the Gardner Museum’s basement where Abath’s worst fears were confirmed. The “police” informed the guards that they were there to rob the museum. 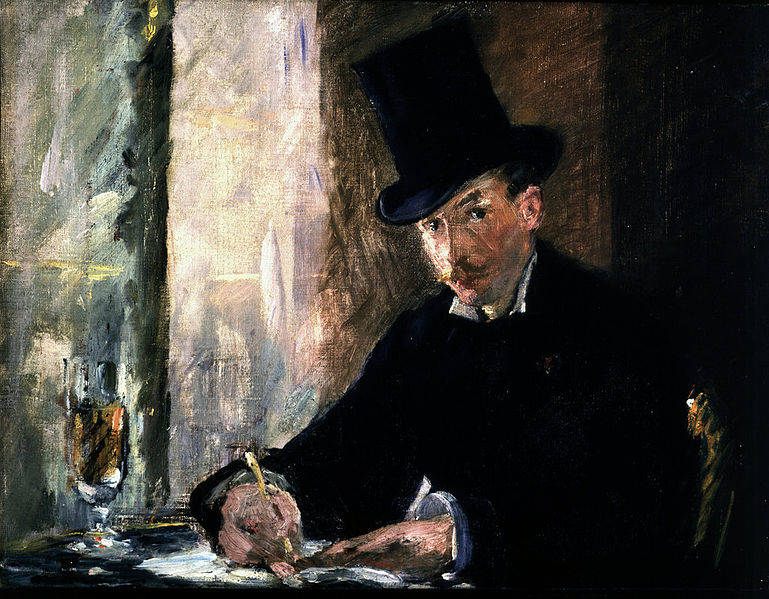 Wikimedia CommonsManet’s Chez Tortoni, a masterwork stolen during the heist.

The thieves proceeded to remove priceless works right from the museum’s walls. They then cut Rembrandt’s The Storm on the Sea of Galilee, and A Lady and Gentleman in Black as well as Vermeer’s The Concert and Govaert Flinck’s Landscape with Obelisk out of their frames.

They also snatched a Chinese bronze vessel from the Shang dynasty, Manet’s Chez Tortoni, and five Degas drawings. After unsuccessfully attempting to unscrew a Napoleonic flag from the wall, they took the eagle finial atop it instead.

The thieves then brought these Gardner Museum works out to their car in two trips. Police did not arrive to investigate and release the guards until 8:15 a.m. the next morning.

In a matter of 81 minutes, $500 million worth of art was stolen in the Gardner Museum heist — and nearly 30 years later, it remains missing.

Who Robbed The Gardner Museum?

On the one hand, investigators suspected that the thieves probably didn’t know too much about art. The museum’s most expensive piece, a painting by Titian, remained untouched.

But although the thieves weren’t art experts, they did seem to be master criminals. They left few clues behind, leaving detectives with little to investigate.

Leads have come and gone since the 1990 Boston art heist, though in more recent years, the FBI has zeroed in on a local band of thieves — many now dead — with ties to Mafia families in New England and Philadelphia, including to mafioso Whitey Bulger.

“If these paintings do not get recovered — and I hope that’s not the case — it’s not going to be for lack of trying by the FBI, the museum, and the US attorney’s office,” said FBI Special Agent Geoff Kelly, a 12-year leader of the investigation. 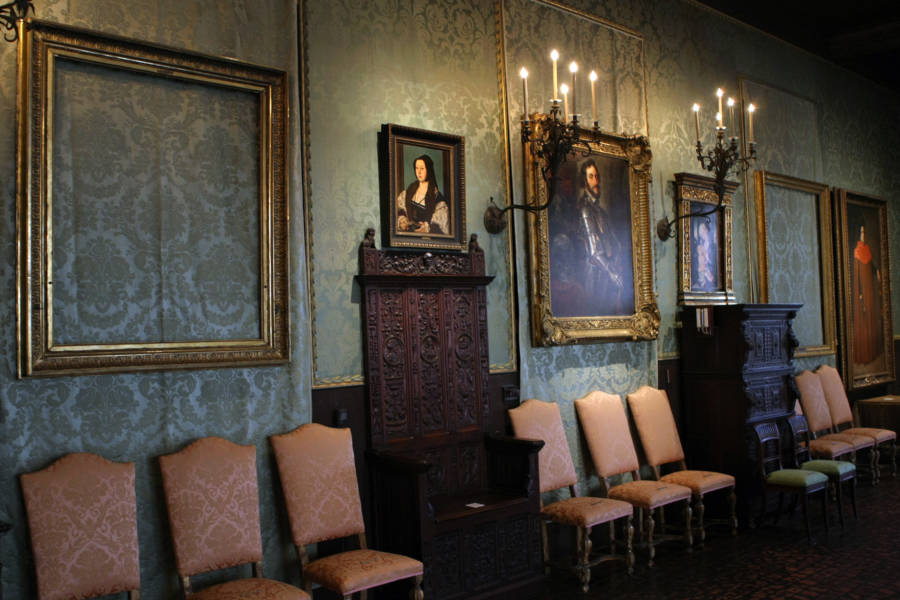 David L Ryan/The Boston Globe via Getty ImagesSpaces for missing Rembrandt paintings. The work was cut from the frames.

Eventually, the FBI believed they nearly had the Gardner Museum heist solved when they traced the art to a location either somewhere in Connecticut or Philadelphia and offered a reward for more information — first $1 million, then $5 million, and ultimately $10 million.

Though the trail went cold, authorities held out hope that one of their prime suspects, a mobster named Robert Gentile, might eventually talk. But Gentile — also called “the Cook” — died in 2021. 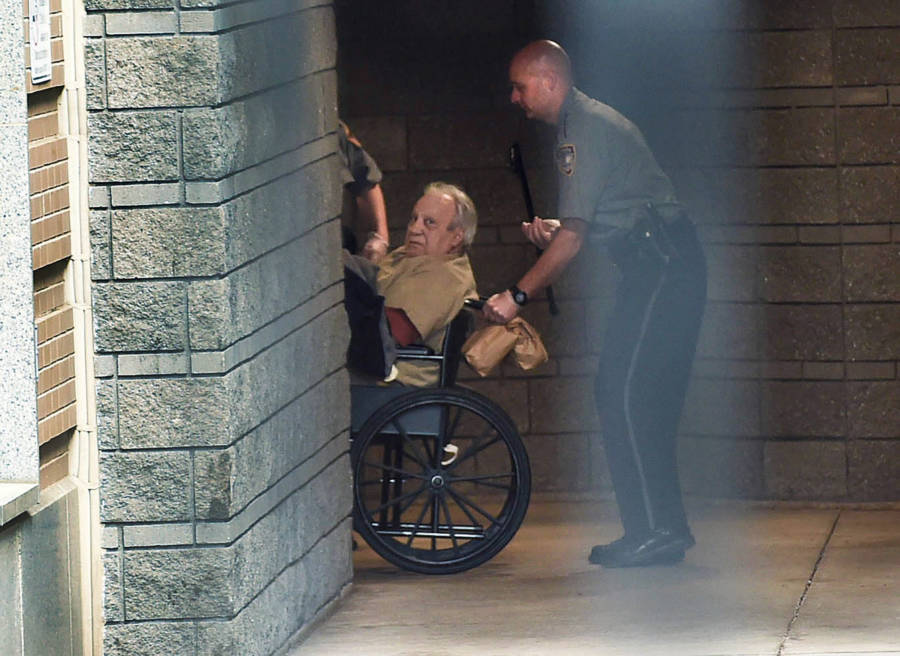 The FBI first began to focus on Robert Gentile in 2009. Then, the widow of a mobster named Elene Guarente told authorities that her husband had given two of the paintings from the Boston art heist to Gentile.

Gentile denied this. “[Elene’s] crazy,” Gentile claimed years later. “She’s bipolar. She’s nuts, I know she was nuts.” He insisted that he had nothing to do with the Gardner art heist.

When authorities first started to investigate him, Gentile agreed to answer questions. But he failed his polygraph test and subsequently stopped cooperating with the FBI.

With a witness and a failed polygraph in hand, authorities believed they finally had the Gardner Museum heist solved. When they got a warrant to search Gentile’s house in 2012, many agents felt confident that they’d finally solve the Gardner art heist.

“Word came in, we’re going to get this stuff back,” recalled John Green, a former FBI forensic photographer. Before searching Gentile’s house, the FBI made up big poster boards of the missing artwork with the word “RECOVERED” stamped on the front. 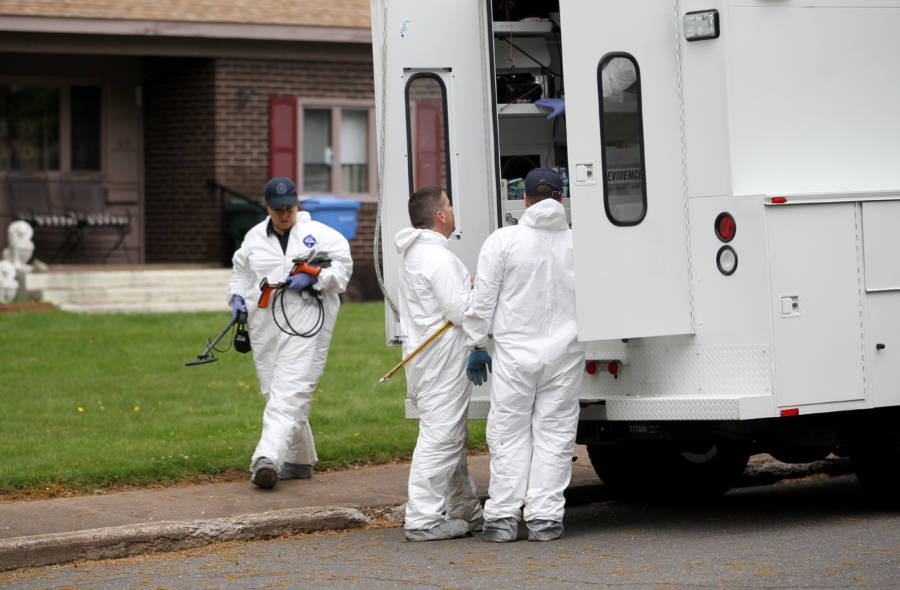 But they didn’t find any of the missing paintings in Gentile’s home.

The search did turn up some compelling evidence, however. FBI agents found police hats, badges, $20,000 in cash, and a sizable collection of weaponry. Most incriminating of all, they recovered a list of the stolen Gardner pieces with their potential black market prices.

But Gentile continued to deny that he had any involvement in the Boston art heist, let alone possession of the paintings. He claimed he’d gotten the list from an associate in Massachusetts as part of a fake scheme to profit from the publicity surrounding the Gardner heist.

A few years later, Gentile’s cousin told the FBI that the mobster had planned to sell the paintings for $500,000 each, and even kept the Napoleonic eagle in his auto repair shop. Still, Gentile denied everything.

Authorities held out hope that Gentile would eventually admit to having the paintings or at least knowing where they ended up. These hopes were dashed when “The Cook” died on Sept. 17, 2021.

“We’ve always believed that Robert Gentile had some information that could have helped us, but chose not to reveal it,” Gardner security director and chief investigator Anthony Amore said, adding that he believed Gentile had knowledge of at least two works.

But Gentile’s longtime attorney, Ryan McGuigan, says that the authorities had the wrong man.

“I had once been told by the government that [Gentile] was a dangerous man. A bad man. I never agreed,” McGuigan said in a statement. “I only saw an elderly man that was being kicked while he was down.”

Until the day he died, Robert Gentile continued to deny that he had any knowledge of the paintings stolen during the Gardner Museum heist. To date, they’ve never been found.

After this look at the enduring mystery of the Isabella Stewart Gardner Museum heist, read up on another infamous robbery, the Lufthansa heist. Then, read up on David Ghantt and the Loomis Fargo Heist.