David Ghantt walked out of the Loomis Fargo heist with the money in hand — but then the problems started piling up. 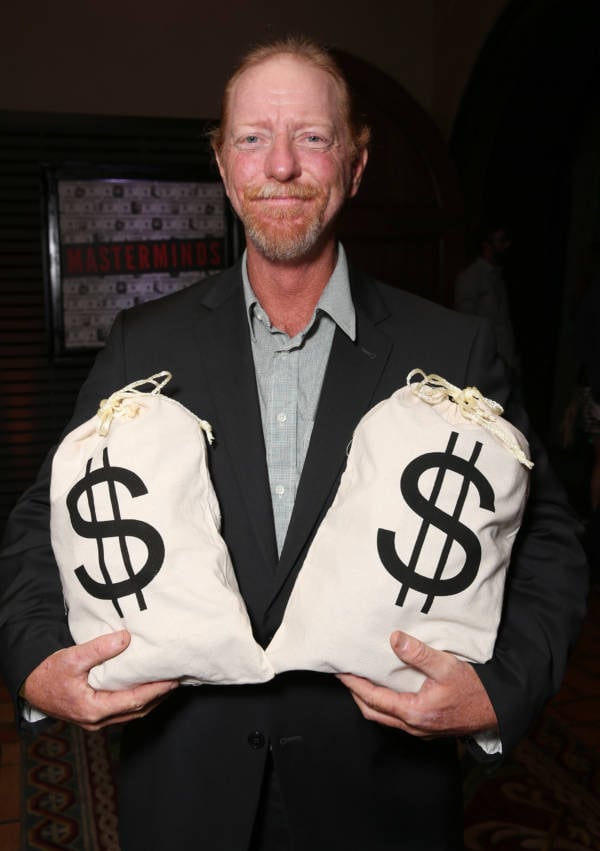 Todd Williamson/Getty ImagesDavid Ghantt attends the 2016 after party for the Hollywood premiere of Masterminds, based on the Loomis Fargo heist that he helped carry out.

David Ghantt was the vault supervisor for Loomis, Fargo & Co. armored cars, which managed the transportation of large sums of cash between banks in North Carolina. But even though he worked for a company that regularly moved millions of dollars, David Ghantt himself was underpaid. So he hatched a plan to rob his employers.

As he later recalled about his life before the 1997 heist that changed his life forever:

“Prior to, I would have never even considered it but one day life kinda slapped me in the face. I was working sometimes 75-80 hrs a week for $8.15 an hour, I didn’t even have a real home life because I was never there I was working all the time and unhappy which is understandable considering how old I was at the time. I felt cornered and one day the joking in the break room about robbing the place suddenly didn’t seem so far-fetched.”

So with the assistance of a co-worker and possible love interest as well as a small-time criminal, David Ghantt pulled off the then-second-largest cash heist in U.S. history. Too bad it was so poorly planned.

David Ghantt Plans For A Raise

David Ghantt, a Gulf War veteran, had never been in trouble with the law. He was also married. But neither of those things would matter after he met Kelly Campbell.

Campbell was another employee at Loomis Fargo and she and Ghantt quickly struck up a relationship, one that Campbell denies was ever romantic though FBI evidence says otherwise, and one that continued after she left the company.

One day, Campbell was speaking to an old friend named Steve Chambers. Chambers was a small-time crook who suggested to Campbell that they rob Loomis Fargo. Campbell was receptive and brought the idea up to Ghantt.

Together, they came up with a plan.

While making only eight dollars an hour in his role as supervisor, Ghantt decided it was time to do something: “I was unhappy with my life. I wanted to make a drastic change and I went for it,” Ghantt remembered later to the Gaston Gazette.

And drastic it was. In fact, David Ghantt was about to commit the heist of a lifetime. 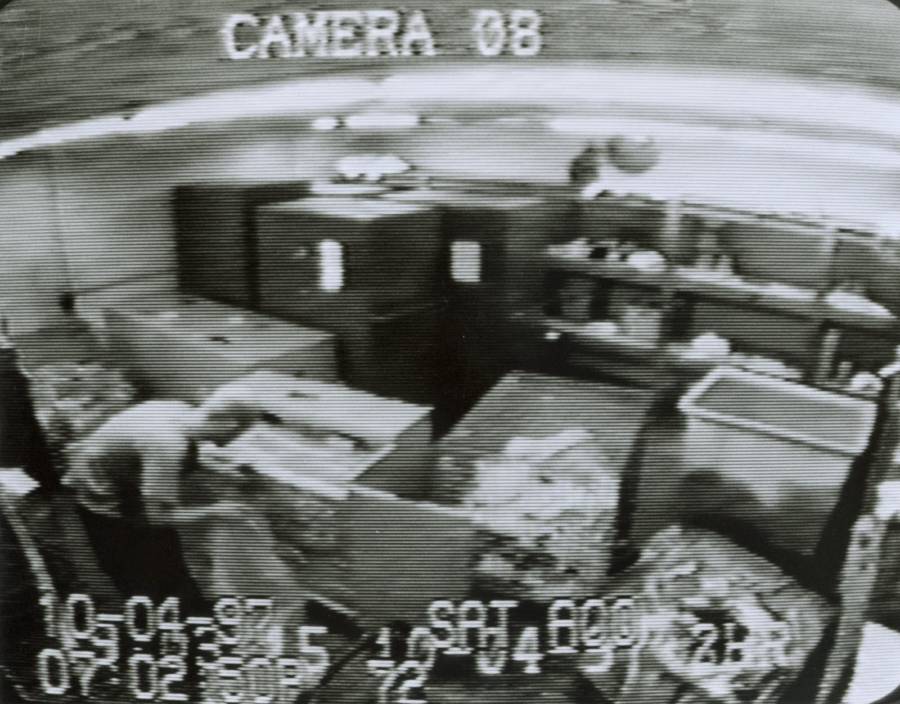 Retro CharlotteFBI security footage of David Ghantt in the midst of the Loomis Fargo heist.

Ghantt, Chambers, and Campbell came up with the following plan: Ghantt would remain in the vault after his shift on the night of the heist, Oct. 4, 1997, and let his co-conspirators into the vault. They would then load as much cash as they could carry into a van. Meanwhile, Ghantt would take $50,000, as much as could legally be carried across the border without questions, and flee to Mexico.

Chambers would hold on to most of the remaining cash and wire it to Ghantt as needed. Once the heat was off, Ghantt would return and they would split the haul evenly.

If you can see the obvious flaw in this plan, namely that Chambers would have no reason whatsoever to actually wire Ghantt any money, then congratulations. You’re better at planning bank heists than David Ghantt.

As it turns out, the heist did in fact go as well as you might expect.

On Oct. 4, Ghantt sent home the employee he was training and disabled two security cameras near the vault in preparation for the heist. Unfortunately, he failed to disable the third camera. “I didn’t even know about it and overlooked it,” he said.

And so this third camera caught everything that happened next.

Ghantt’s accomplices soon showed up but now they had another problem. You see, there’s a reason Loomis Fargo used armored cars to move large amounts of cash. It’s heavy. And Ghantt hadn’t really thought about the physical challenge of moving such a large sum of money.

Instead, the bandits just started throwing as much money as they could into the van until they couldn’t fit anymore. Even though they drove away with less than they had initially intended, they still had more than $17 million in hand.

And with that, David Ghantt took off for Mexico.

When the rest of the Loomis Fargo employees showed up the next morning and found that they couldn’t open the vault, they called the police. Because Ghantt was the only employee who wasn’t there that morning, he became the obvious suspect.

That suspicion was immediately confirmed by a quick glance at the security camera footage that showed Ghantt doing a little dance after loading all the cash into the van.

Within two days, the investigators found the van with $3 million in cash and the security camera tapes inside. The thieves had simply abandoned whatever they couldn’t carry away. It was an open-and-shut case and all authorities had to do now was to find the culprit and identify Ghantt’s accomplices.

Campbell and Chambers made themselves easy to catch, what with their lavish spending. Chambers had known enough to insist that no one blows through a ton of cash immediately after the robbery, but once he actually had his hands on the money, he couldn’t follow his own advice. Chambers and his wife Michele moved out of a trailer and into a luxury mansion in a nice neighborhood.

But of course, then they had to decorate that spectacular new space and so they spent tens of thousands of dollars on things like cigar store Indians, paintings of Elvis, and a bulldog dressed up like George Patton. 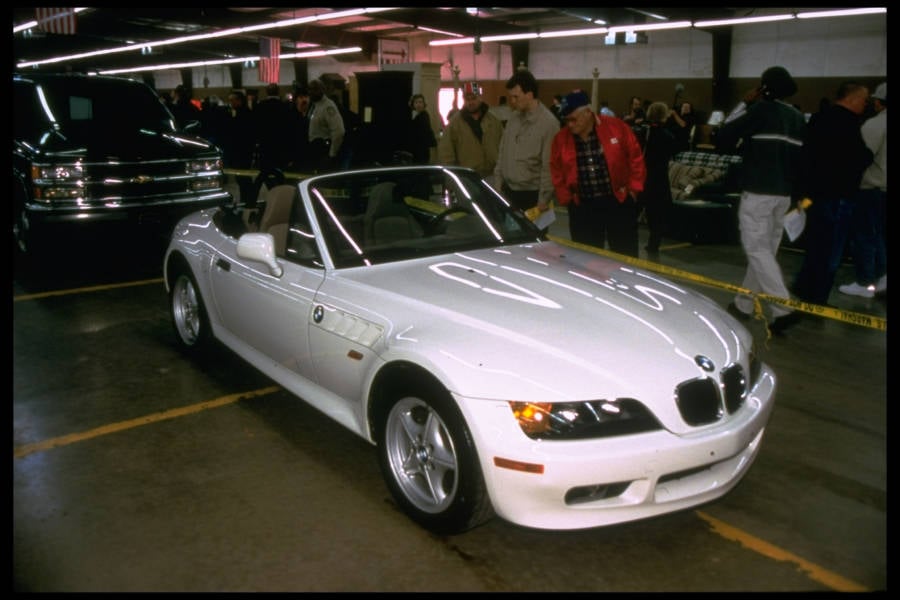 Chambers and his wife also made some cash payments on a few cars. Then Michele made a trip to the bank. She wondered how much she could deposit without attracting the attention of the FBI, so she decided to just ask the teller:

“How much can I deposit before you have to report it to the feds?” she asked. “Don’t worry, it’s not drug money.”

In spite of Chambers’ assurance that the money was, you know, totally not illegally acquired, the teller remained suspicious, especially because the stacks of cash still had Loomis Fargo wrappers on them.

She reported it immediately.

The Hit That Fell Short

Meanwhile, David Ghantt was relaxing on a beach in Cozumel, Mexico. He left his wedding ring behind and spent his days spending money on luxury hotels and scuba diving. When asked what the “dumbest thing was” that Ghantt spent money on, he admitted:

“The 4 pairs of boots I bought in one day [shrug] what can I say they were nice and I was impulse shopping.”

Naturally, Ghantt started to run out of cash and turned to Chambers, who was annoyed by his requests for more money. So Chambers decided to solve the problem by putting a hit on Ghantt.

Once the hitman Chambers had hired arrived in Mexico, he found that he couldn’t bring himself to kill Ghantt. Instead, the two started hanging out on the beach together and became friends.

Finally, in March 1998, the FBI traced a call from Ghantt’s phone and he was arrested in Mexico. Chambers, his wife, and several of their accomplices were arrested the next day.

The Aftermath Of The Loomis Fargo Heist

In the end, eight co-conspirators were indicted for the Loomis Fargo heist. Because the money in the vault was largely from banks, the crime was technically a bank robbery and thus a federal offense. In total, 24 people were convicted. All but one of the indicted pleaded guilty.

Also charged were several innocent relatives that the robbers had enlisted to help get safety deposit boxes in various banks.

Ghantt was sentenced to seven and a half years in prison, though he was released on parole after five. Chambers served 11 years before being released. All of the cash from the Loomis Fargo heist was recovered or accounted for, except for $2 million. Ghantt has never explained where that money went.

After his release, Ghantt took a job as a construction worker and was eventually brought on as a consultant for the 2016 movie Masterminds, based on the Loomis Fargo Heist. But because he still owes millions to the IRS, he couldn’t be paid. “I work construction. I’ll never pay it off on my paycheck,” Ghantt said.

Generally, the events of the film are fairly close to reality when they follow the broad details of the case. But as Ghantt admitted, the film took some liberties with specific details and characters to make the film funnier. Ghantt’s wife was reportedly nothing like the bizarre, robotic fiancée character in the film, for instance. There was also no dramatic showdown between Chambers and Ghantt as the movie suggests.

But thanks in part to the film, the outlandish story of David Ghannt and the Loomis Fargo heist will surely live on for years to come.

After this look at David Ghantt and the Loomis Fargo heist, read about a more successful robbery, the Antwerp diamond heist. Then check out another bank robber who inspired a movie, John Wojtowicz.