When John Wojtowicz robbed a Brooklyn bank to pay for his lover's gender-reassignment surgery, he inspired the classic film "Dog Day Afternoon" — which only begins to tell the whole story. 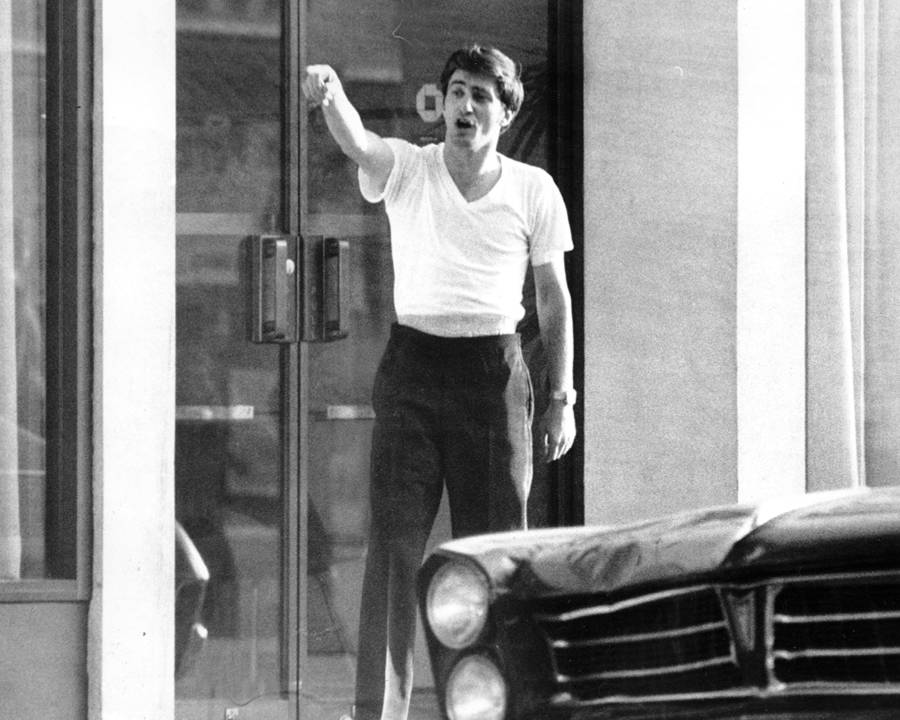 Dan Cronin/NY Daily News Archive via Getty ImagesWhile in the middle of the Brooklyn bank robbery depicted in Dog Day Afternoon, John Wojtowicz points at cops and tells them to back off. “How many times do I have to tell you guys to get out of here!” he shouted. Aug. 22, 1972.

It ranks among the most infamous bank robberies in modern history and served as the inspiration for the classic film Dog Day Afternoon. But in the case of the 1972 New York bank heist committed by John Wojtowicz and his associates, the true story is even stranger and more fascinating than fiction.

John Wojtowicz, born in New York City in 1945, was leading a basically “normal” life in the late 1960s. After graduating high school and serving in Vietnam, he returned home and began working for Chase Manhattan Bank, where he struck up a relationship with a coworker named Carmen Bifulco. The pair married in 1967, but Wojtowicz had been keeping a secret from his new bride.

While in the military, he’d had his first gay encounter during basic training, courtesy of “a hillbilly by the name of Wilbur,” before being sent off to Vietnam. And when he returned home, he was not only keeping his sexuality a secret, he was also dealing with the fallout of his wartime experiences (including being one of the only survivors of a rocket attack on his base).

As his mother, Terry, later said: “When he was a kid, he was good. He was no trouble. The service screwed him all up.”

After being discharged from the service in 1967 and quickly marrying Bifulco, John Wojtowicz couldn’t live a lie for long. He separated from his wife in 1969 and joined the Gay Activist Alliance in addition to taking up with a string of male lovers.

In 1971, he met Ernie Aron, who identified as female and went by the name Liz Eden. That same year, the pair “married” in an unofficial ceremony (an official one wasn’t possible at the time).

Eden longed for gender-reassignment surgery, an idea Wojtowicz originally opposed until Eden was hospitalized after a suicide attempt. Wojtowicz then decided that Eden needed the surgery in order to end her depression. And he decided to finance the operation himself — by robbing a bank. 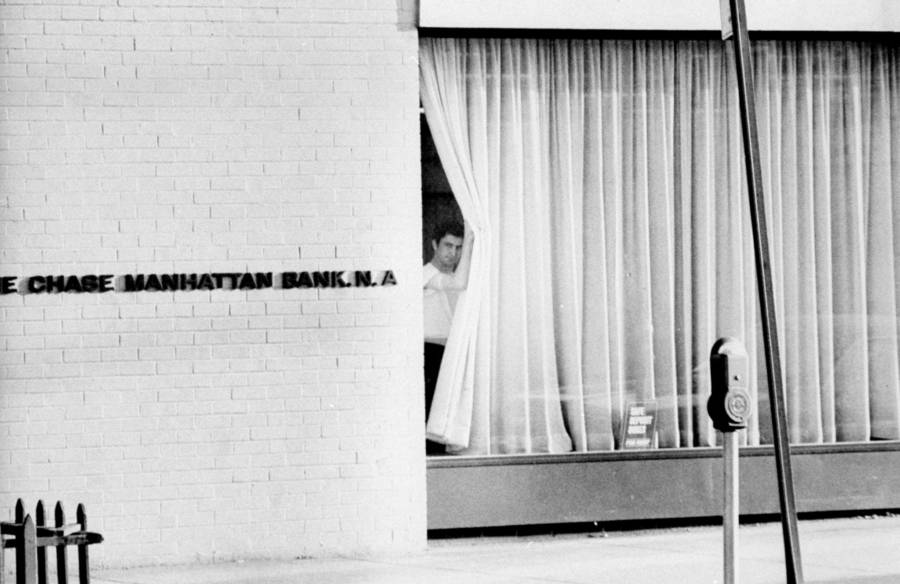 Eager to get the money for Eden’s gender-reassignment surgery (although some claim that John Wojtowicz actually carried out the robbery to pay back money he’d borrowed from the Mafia), Wojtowicz soon put together a team that would help him rob a bank.

He recruited Bobby Westenberg and Salvatore Naturale (whom he had both met previously at a gay bar) to help him with the heist, but the trio was far from professional. They simply drove around New York on Aug. 22, 1972 looking for a bank to rob.

At the first bank they entered, they accidentally dropped their shotgun, causing it to go off, but managed to flee. At the second, Westenberg ran into a friend of his mother’s and they called it off.

After going to see The Godfather, they finally decided on a Chase Bank in the Gravesend section of Brooklyn. They entered and slipped the teller a note bearing a paraphrased quote from the film: “this is an offer you can’t refuse.”

And so began one of the biggest media circuses in New York City history.

As it turned out, the branch’s vault was half-empty, but John Wojtowicz and his accomplices did still manage to seize $38,000 in cash and $175,000 in traveler’s checks before one of the employees was able to sound the alarm and police arrived on the scene.

The robbers then took all eight people inside the bank as hostages and holed up for what would be a 14-hour standoff with the authorities.

In addition to the FBI agents, police, journalists, and snipers posted on the rooftops, around 2,000 rowdy spectators (including Wojtowicz’s own mother) gathered in the boiling summer heat to watch the crime unfold. “That was a Brooklyn crowd that night” one journalist who had been on the scene recalled. “It was a full-blown show.”

Helping to make it a full-blown show, John Wojtowicz eagerly jumped into his role as ringleader. He had pizza ordered for his hostages, then paid the delivery guy with wads of cash taken from the bank, and then tossed more stolen money into the cheering crowd.

Even the hostages came to have a certain fondness for Wojtowicz and were less scared of him than they were simply exhausted. As teller Shirley Ball recalled, “I realized that he was friendly…had a purpose for robbing the bank…he thought he would be in and out.”

But it wasn’t an in-and-out job and tensions started to rise as the hours dragged on.

Eventually, New York Daily News reporter Robert Kappstatter got the interview of a lifetime when he called the bank on a whim and Wojtowicz himself actually picked up. Caught off guard, Kappstatter opened the conversation with a “so, how’s it going?” to which Wojtowicz snapped back “How do you think?”

But the tense standoff finally ended when the FBI agreed to drive Wojtowicz and Naturale (Westenberg had long since fled the scene before the cops even arrived) to Kennedy International Airport and put them on an international flight.

Of course, this was a ruse. Agents were waiting for them at the airport and as soon as the pair arrived, Naturale was shot dead (the day’s only casualty) and John Wojtowicz was arrested.

The Aftermath And The Film

Wojtowicz was sentenced to 20 years in prison but only wound up serving five and was released in 1978. While in prison, he actually was able to see Dog Day Afternoon and take in the lead performance of Al Pacino, who had of course also starred in The Godfather, which Wojtowicz had watched the day of the robbery.

The warden originally objected to his prisoner viewing the film until Wojtowicz threatened to “start the biggest prison riot you ever saw.” He was eventually permitted to view the movie in the company of just a single guard.

Although he described it as a “very moving experience,” he actually sent a letter to the culture editor of The New York Times protesting that the film “did not show the whole truth, and the little it did show was constantly twisted and distorted.”

His biggest problem was that the film “hint[ed] very dramatically that I made some kind of a deal to betray my partner, Sal…This is not true and there is no human being low enough in this world who would let the F.B.I. kill his partner in order for him to survive.”

Wojtowicz also had issues with the casting of his wife, stating that the film made Carmen “look horrible and inferred that I left her and winded up in the arms of a Gay man because of her. This is completely untrue, and I feel sorry for the actress for having to play such a horrible role.”

But Wojtowicz’s issues with the film aside, it was a hit with both critics and audiences, making back its budget more than 20 times over and receiving six Academy Award nominations (winning one, for its screenplay).

After the film came and went, and Wojtowicz got his release from prison, he moved back in with his mother in New York (Eden had left him for someone else before dying of AIDS-related pneumonia in 1987).

John Wojtowicz spent the rest of his days in New York. At one point, he even applied to work as a guard at a Chase Bank, claiming “I’m the guy from Dog Day Afternoon, and if I’m guarding your bank, nobody’s going to rob the Dog’s bank.” They declined and he spent some of his final years on welfare before dying of cancer in 2006.

After this look at John Wojtowicz, discover the true story of New York gangster Henry Hill and the real-life Goodfellas. Then, read up on 1930s rock star bank robber John Dillinger.