The mosaic was first discovered in the 1930s and once formed part of the dance floor on one of Emperor Caligula's giant party ships where he hosted lavish and debaucherous events. 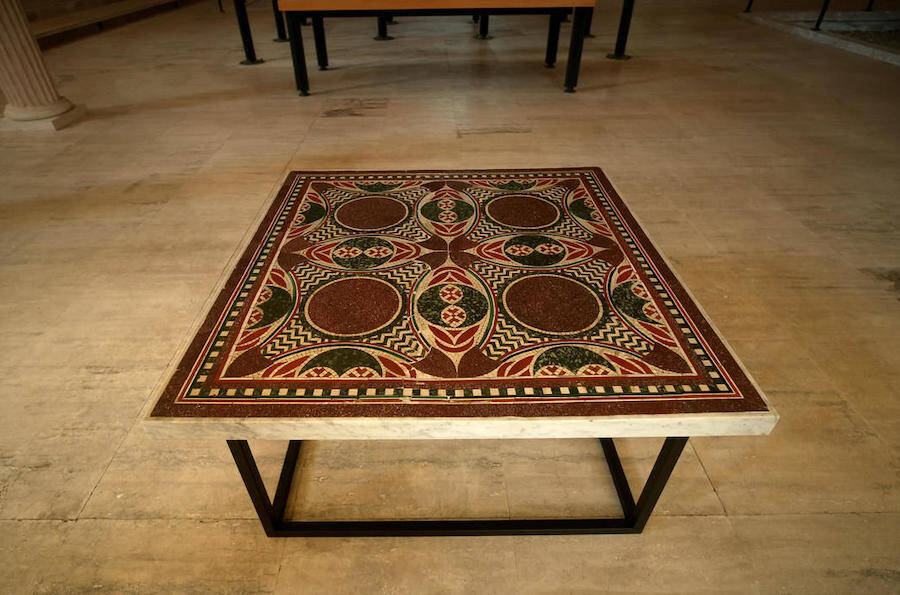 60 Minutes/YouTubeThe mosaic was lost after Caligula’s assassination in 41 A.D.

In the 1960s, antique dealer Helen Fioratti and her husband purchased a mosaic from an aristocratic family in Italy. And when they brought it home to New York, they put it on a base and made it into a coffee table that they used daily for nearly 50 years.

But it turns out that the mosaic is a priceless Roman artifact that once adorned emperor Caligula’s extravagant ship 2,000 years ago. And the discovery was only made by accident in 2013 when an expert in ancient marbles happened to overhear a conversation about an image in a book he had recently published.

According to The Smithsonian, Dario Del Bufalo was signing copies of his book in New York when the Italian expert on ancient marble and stone overheard Fioratti pointing to a photo of the mosaic in Del Bufalo’s book.

“There was a lady with a young guy with a strange hat that came to the table,” recalled Del Bufalo. “And he told her, ‘What a beautiful book. Oh, Helen, look, that’s your mosaic.’ And she said, ‘Yeah, that’s my mosaic.'” 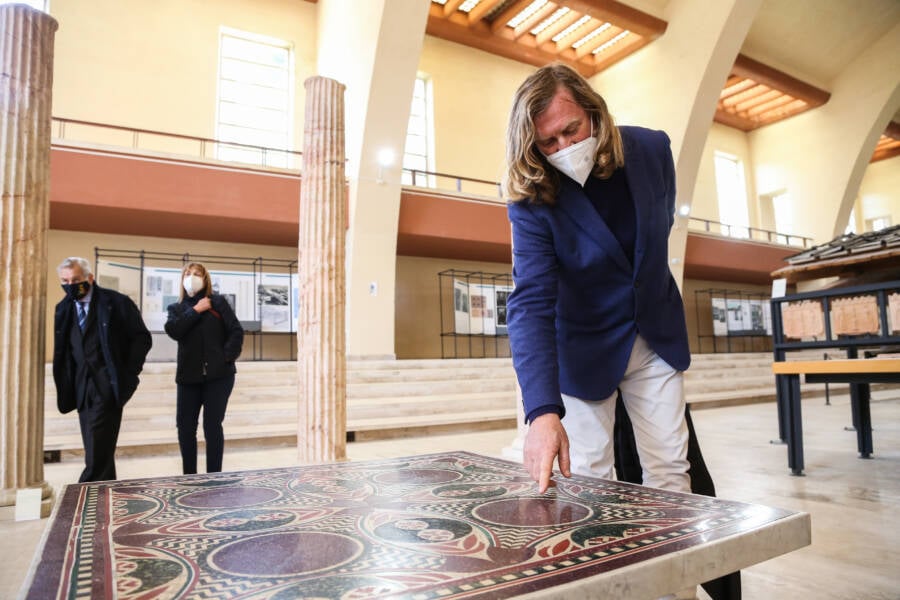 The mosaic is comprised of green and white marble and purple-red porphyry and measures 4.5-feet square. According to CBS News, it originally served as part of the dance floor of one of Caligula’s “pleasure ships.”

These were essentially enormous barges for the Roman emperor to host decadent parties and held a variety of gardens, baths, and galleries. The largest of these floating events venues measured 240 feet in length.

“The mosaic testifies how important and luxurious these imperial ships were,” said Nemi Mayor Alberto Bertucci. “These ships were like buildings: They were not supposed to seal and they confirm the greatness of this emperor who wanted to show the greatness of his rule of the Roman Empire through these ships.” 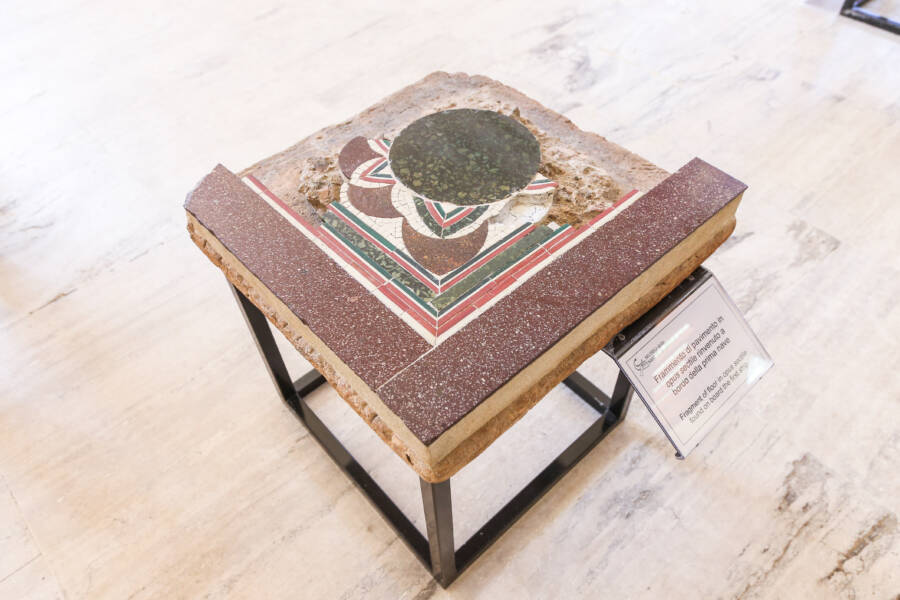 Ernesto Ruscio/Getty ImagesAnother mosaic from Caligula’s “pleasure boat” on display at the Museum of Roman Ships in Italy.

However, after Caligula’s assassination in 41 A.D., the vessels were sunk in Lake Nemi to eradicate all trace of his vicious rule. Those ships remained submerged until the 1930s when Mussolini had Lake Nemi drained and his workers retrieved two wrecks and the artifacts within.

The mosaic was subsequently placed in a lakeside museum where it safely remained until World War II — and retreating Nazi Germans set fire to buildings in May 1944.

Then, the mosaic vanished for decades, with the details of how a noble family got their hands on it still a mystery. And an Italian police official who specialized in finding Nazi-looted artworks had even brokered the sale.

“It was an innocent purchase. It was our favorite thing, and we had it for 45 years,” said Fioratti. “We were very happy with it. We loved it. We had it for years and years, and people always complimented us on it.” 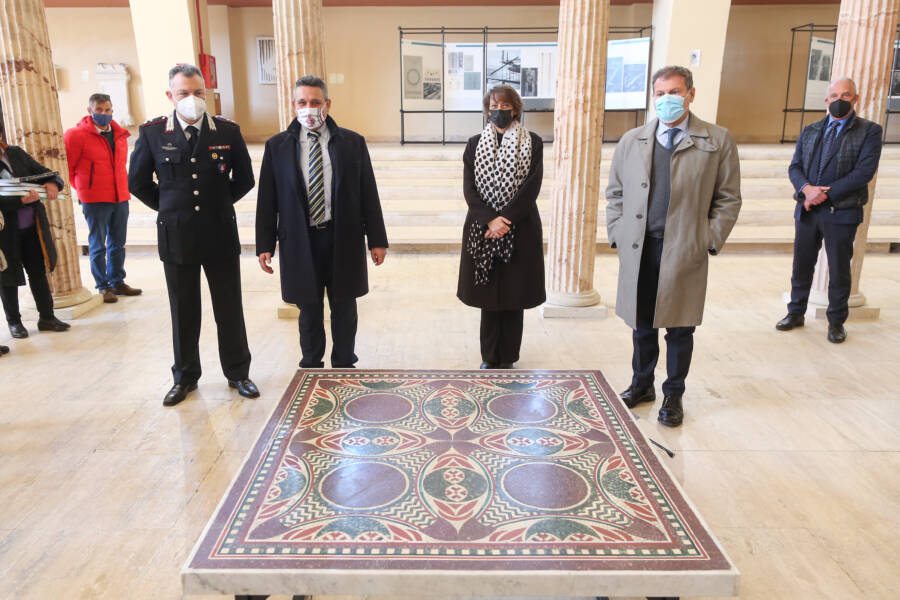 Ernesto Ruscio/Getty ImagesItalian officials including Nemi’s mayor Alberto Bertucci (second from the left) at the unveiling on March 11, 2021.

According to The Guardian, Del Bufalo made no qualms about reporting the incident to authorities after confirming the item’s authenticity. Significantly, the mosaic bore no evidence of fire — suggesting it had been stolen from the lakeside museum before it went ablaze and allowing the Italian government to claim it.

In 2017, the mosaic was returned to Italy and just this year has gone on display in the Museum of Roman Ships on the shore of Lake Nemi, just steps from where Roman soldiers and celebrating guests once festively danced upon it.

“I feel very sorry for her, but I couldn’t do anything different, knowing that my museum in Nemi is missing the best part that went through the centuries, through the war, through a fire, and then through an Italian art dealer, and finally could go back to the museum,” Del Bufalo said.

“That’s the only thing I felt I should have done.”

After learning about the Roman emperor Caligula’s mosaic that became a coffee table, read 33 facts about the Roman Empire that will change the way you see history. Then learn about the biblical mosaics depicting the end of days found in a 1,600-year-old synagogue.