How Did Chris Cornell Die? Inside The Grunge Icon’s Devastating Suicide And The Story Behind It

After hanging himself in his Detroit hotel room on May 18, 2017, Soundgarden frontman Chris Cornell was found dead at the age of just 52. 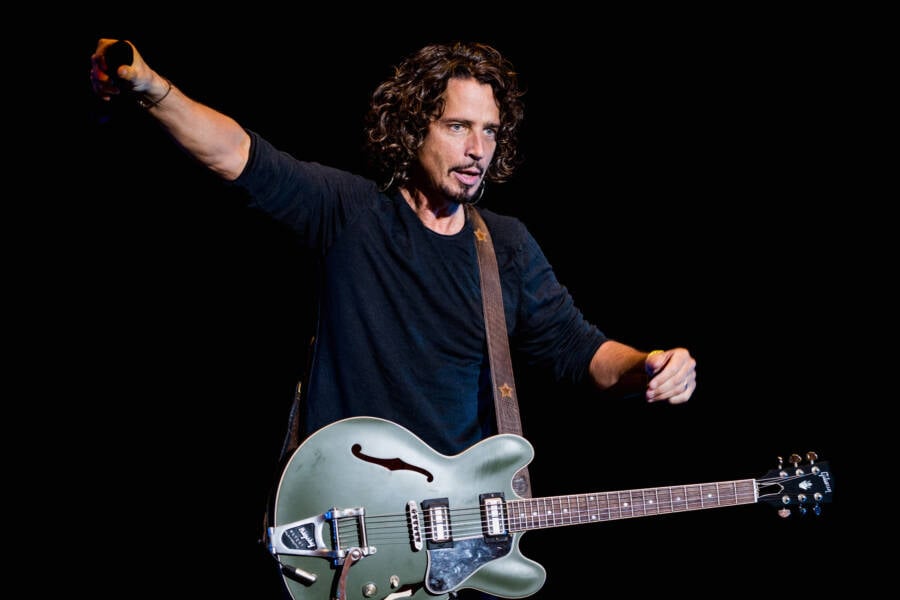 Buda Mendes/Getty Images As the lead singer of Soundgarden and Audioslave, Chris Cornell was a living legend of the grunge era. Here, the singer performs at Lollapalooza Brazil in 2014.

Chris Cornell’s death was shocking — but it wasn’t a complete surprise. After all, the Soundgarden frontman had a long history of drug addiction and depression before his apparent suicide in Detroit on May 18, 2017.

However, his widow remained adamant that he wasn’t suicidal before his death. And some fans and amateur sleuths believed that he was actually murdered. To this day, many insist that questions remain about how Chris Cornell died and what the true cause was.

The grunge icon’s last night on Earth began like many others. Soundgarden was on tour, having just reunited after a years-long hiatus — much to the delight of their fans. But things took a deadly turn about an hour after the band walked off the stage at Fox Theatre in Detroit, Michigan at 11:15 p.m.

After the concert ended, Cornell’s bodyguard Martin Kirsten walked the singer back to his MGM Grand Hotel room. He helped him with his laptop and gave him two doses of Ativan, an anti-anxiety drug for which Cornell had a prescription. Kirsten then retreated to his room down the hall and called it a night. But tragically, the night was far from over.

Back in Los Angeles, Cornell’s wife Vicky noticed that the lights in her home were flickering on and off. Her husband had an app on his phone that allowed him to operate them remotely — and Vicky started to worry about why he was doing this at such an odd time.

When she called Cornell at 11:35 p.m., he picked up the phone. But their conversation didn’t alleviate her concerns — especially since he was slurring his words. She said, “You need to tell me what you took.”

Cornell reassured his wife that he had merely taken an “extra Ativan or two.” But Vicky’s worry deepened “because he did not sound like he is okay.” So at 12:15 a.m., she demanded that Kirsten check on her husband. But by that point, it was already too late. Chris Cornell was dead at just 52 years old.

The singer was found with an exercise band around his neck and blood running from his mouth. While his death was ruled a suicide by hanging, fans began to suspect foul play. They thought the amount of blood found at the scene was strange for a hanging. Meanwhile, his grieving family blamed his doctor — who allegedly overprescribed him with “dangerous” medication.

Though Chris Cornell’s death is still officially ruled a suicide, questions have lingered. But regardless of how Chris Cornell died, there’s no question that his demise was a tragedy that touched countless people around the world.

The Making Of A Grunge Icon 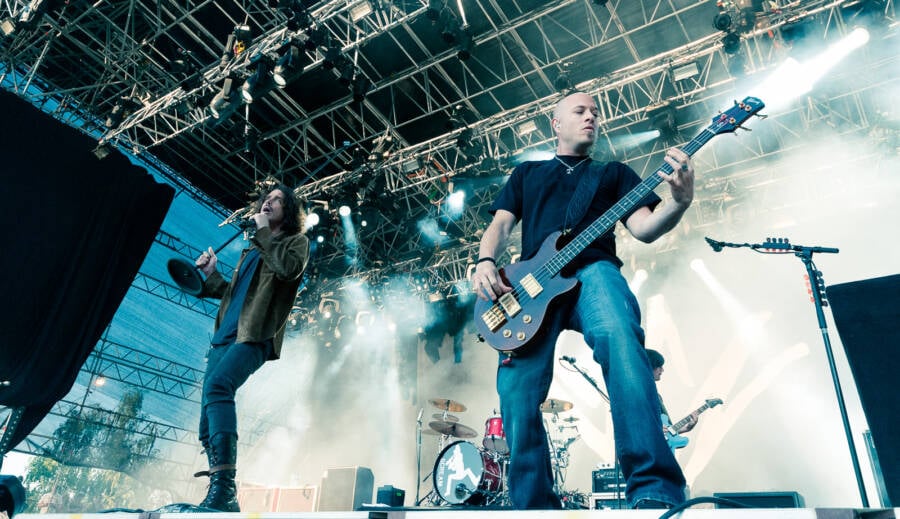 Wikimedia CommonsChris Cornell performing at the Quart Festival in Kristiansand, Norway in 2009.

Born Christopher John Boyle on July 29, 1964, in Seattle, Washington, Cornell later changed his last name to his mother’s maiden name after his parents divorced. Tragically, Cornell had a rough start in life and struggled with depression and drug addiction early on.

By age 13, he was already drinking and doing drugs regularly. And unlike other rebellious adolescents, he wasn’t just experimenting with marijuana. He also used LSD and a variety of prescription drugs. And he had a terrible experience with PCP when he was just 14 years old.

Although he vowed to stay sober, Cornell relapsed at 15 and ended up dropping out of high school. He started working in restaurants to get by. Cornell later credited his mother with saving his life when she bought him a snare drum. Before long, he was performing with cover bands in the Seattle grunge scene. Music seemed like the perfect way to escape his demons.

Cornell found his peers soon enough and performed at the same clubs as Nirvana and Alice In Chains. In 1984, he formed Soundgarden, which became the first grunge act to sign to a major record label in 1989. But the band didn’t truly break out until 1994, after Kurt Cobain’s death.

After producing five studio albums, selling millions of units, and performing countless sold-out tours, Soundgarden broke up in 1997. Following the band’s breakup, Cornell embarked on a successful solo career and founded the group Audioslave with members of Rage Against The Machine.

Cornell seemed to have it all. But by the time Soundgarden reunited in 2016, his demons had returned to haunt him. In March 2017, only two months before his death, he emailed a colleague: “Would love to talk, had relapse.”

The Death Of Chris Cornell 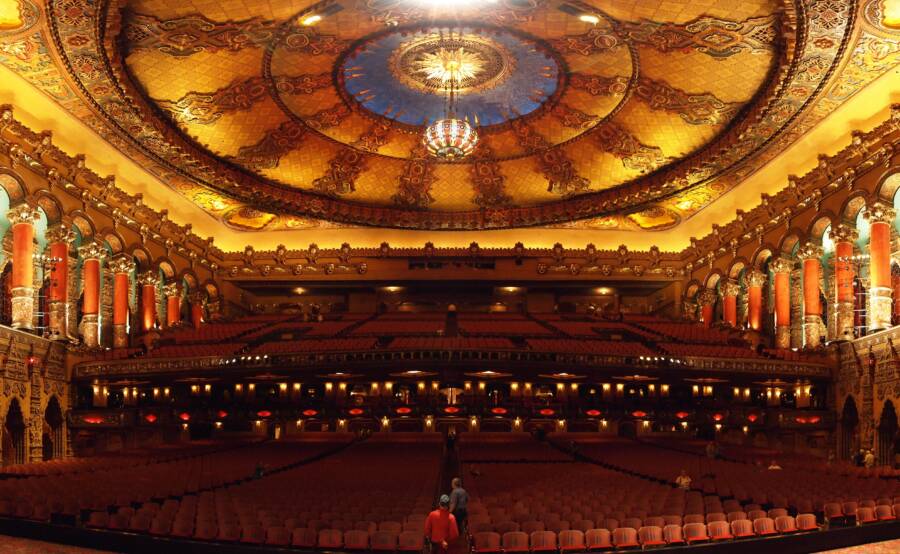 In February 2017, just a year after Soundgarden had started working on a new album, the band announced that it would be embarking on an 18-concert tour. At first, their show in Detroit on May 17 seemed like any other performance. But some fans noticed something was “off” with Cornell.

One reporter who was at the show said, “He often staggered back and forth across the stage, and seemed weak in his movements. Just one or two songs in, it was as if the energy had exited his body, and what was left was a shell of a man scrambling to do his job.”

The Fox Theatre performance concluded at 11:15 p.m. Shortly thereafter, Cornell asked his bodyguard for help with his computer. Kirsten also provided him with Ativan before he went to bed. As the leaked police report confirmed, Cornell often took this medication for anxiety. But soon after he said goodnight to his bodyguard, things quickly spiraled out of control.

Were it not for his wife, Cornell may not have been found until dawn. But Vicky Cornell couldn’t ignore the fact that her husband was remotely flickering the lights at their home in Los Angeles. So she called him at 11:35 p.m. for answers about his strange behavior.

“That was a sign something was off,” she said, adding that he was unusually “mean” and “ranting” when they spoke on the phone.

The concerned mother of two was initially relieved when Cornell told her that he had only taken one or two more Ativan than usual. Still, she was very worried about his condition — especially since she knew all about his troubled history with prescription drugs.

“I am just tired,” Cornell insisted, before abruptly hanging up. 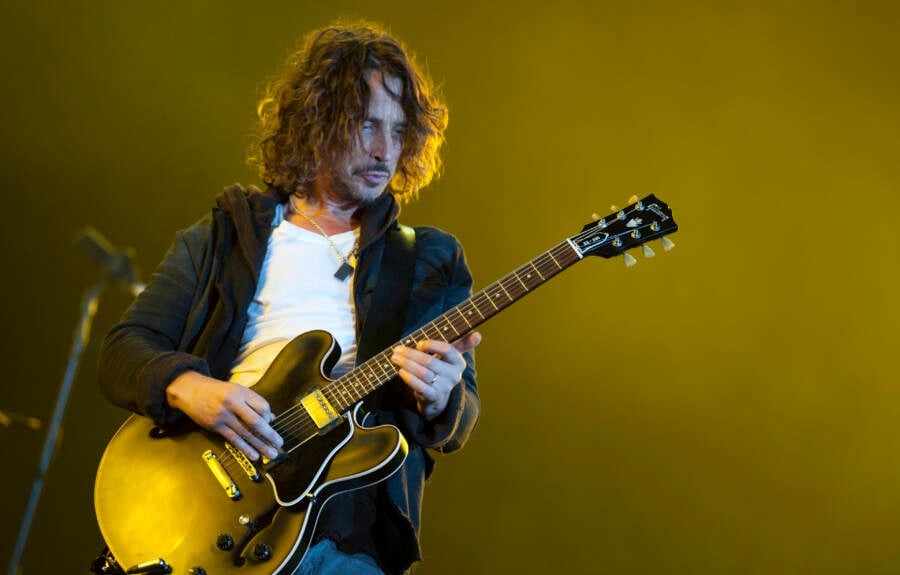 After 40 minutes of replaying the conversation in her head, Vicky Cornell called Kirsten and asked him to personally check on her husband in his hotel room. Kirsten agreed. But even though the bodyguard had a key, Cornell’s door was latched shut. Kirsten explained the situation to Cornell’s wife, who called security for help in accessing the room.

When security refused to grant Kirsten entry, Vicky instructed Kirsten to kick the door down. Kirsten obeyed — and came across a heart-stopping sight.

“I went inside and the bathroom door was partially opened,” Kirsten said. “And I could see his feet.”

Kirsten found Cornell on the bathroom floor with a red exercise band around his neck and blood dripping from his mouth. The exercise band was attached to a carabiner, a device often used by rock climbers to secure their ropes. This piece of equipment had been shoved into the doorframe.

Shockingly, the exercise band was only removed after MGM medic Dawn Jones arrived at the scene at 12:56 a.m.

While Jones attempted to resuscitate Cornell, it was too late. A doctor officially pronounced Chris Cornell dead at 1:30 a.m. on May 18, 2017. 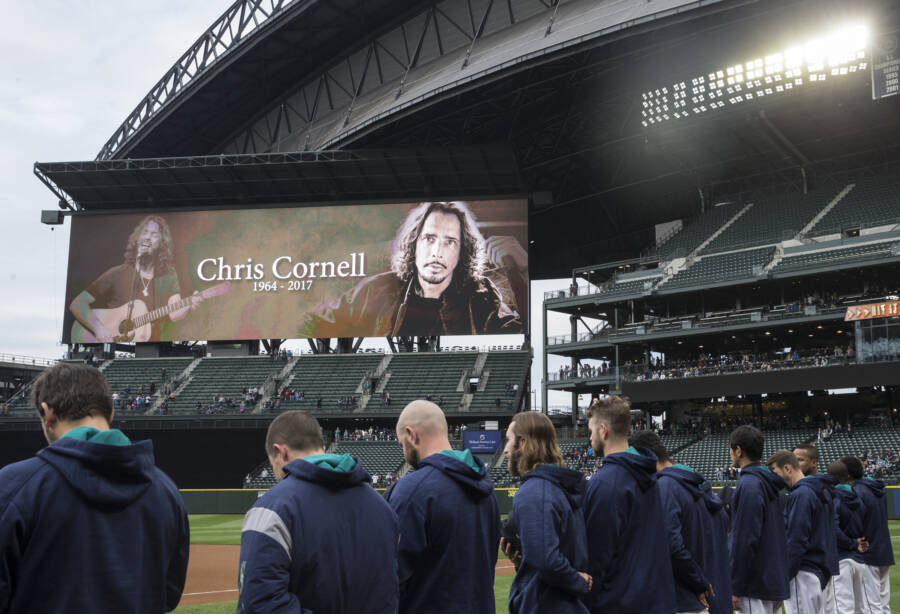 Looking for answers as to how Chris Cornell died, homicide detectives on the scene quickly ruled out foul play. On June 2, the Wayne County Medical Examiner’s report ruled Cornell’s death a suicide by hanging, and said that drugs “did not contribute to the cause of death.”

Still, Cornell’s toxicology report showed that he had multiple drugs in his system at the time, including lorazepam (Ativan), pseudoephedrine (a decongestant), naloxone (an anti-opioid), butalbital (a sedative), and caffeine.

And eerily enough, one of the potential side effects of Ativan is suicidal thoughts. The singer’s loved ones found this fact hard to ignore.

Vicky Cornell remained adamant that her husband hadn’t been suicidal — and that the drugs had clouded his judgment. She said, “He didn’t want to die. If he was of sound mind, I know he wouldn’t have done this.”

Meanwhile, conspiracy theories abounded shortly after Chris Cornell’s death. A big reason why people thought he was murdered was because of the amount of blood at the scene. One forensic pathologist (who wasn’t involved in the case) weighed in, saying that it was “very unlikely” that such a large amount of blood would be found after a hanging.

In response to the people who believe her husband was murdered, Vicky Cornell has said, “Some of the people are fans just looking for answers, but some of them are conspiracy theorists who have said the most vile things to my children and me.”

Perhaps the most baseless conspiracy theory about how Chris Cornell died is the one that suggests he was murdered because he was about to expose an alleged child trafficking ring operating out of a pizza parlor in Washington, D.C. 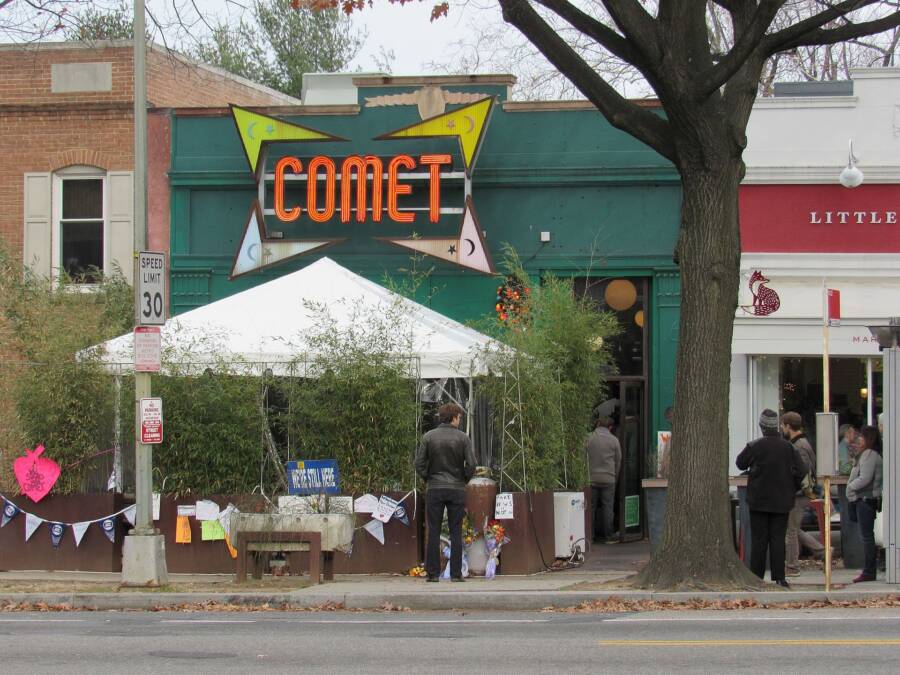 Wikimedia CommonsComet Ping Pong, a pizza parlor in Washington, D.C. This restaurant was once the focus of a since-debunked conspiracy theory that claimed it was the site of an alleged child trafficking ring.

Before Cornell’s death, he and his wife had established a foundation for vulnerable children. But authorities firmly stated that there was no connection between the foundation and the pizza parlor in question.

“We investigated all possible angles, and there were no signs this was anything but a suicide,” said Detroit Police media relations director Michael Woody. “But we’ve been getting inundated with different theories.”

Conspiracy theories aside, others have pointed to some inconsistencies in the reports about Chris Cornell’s death.

For starters, there were two Emergency Medical Services reports on the night of Cornell’s death that mentioned a gash on his head and a laceration to the back of his skull. Vicky Cornell said herself that these injuries were curiously left out of the autopsy report.

Other questions about how Chris Cornell died focused on his fractured ribs — which also seemed strange to some fans in the context of a hanging. (That said, a 2014 study did find that 90 percent of CPR patients suffered the same types of injuries.) Perhaps most confusing is the fact that nobody immediately removed the band around Cornell’s neck after he was found unresponsive. 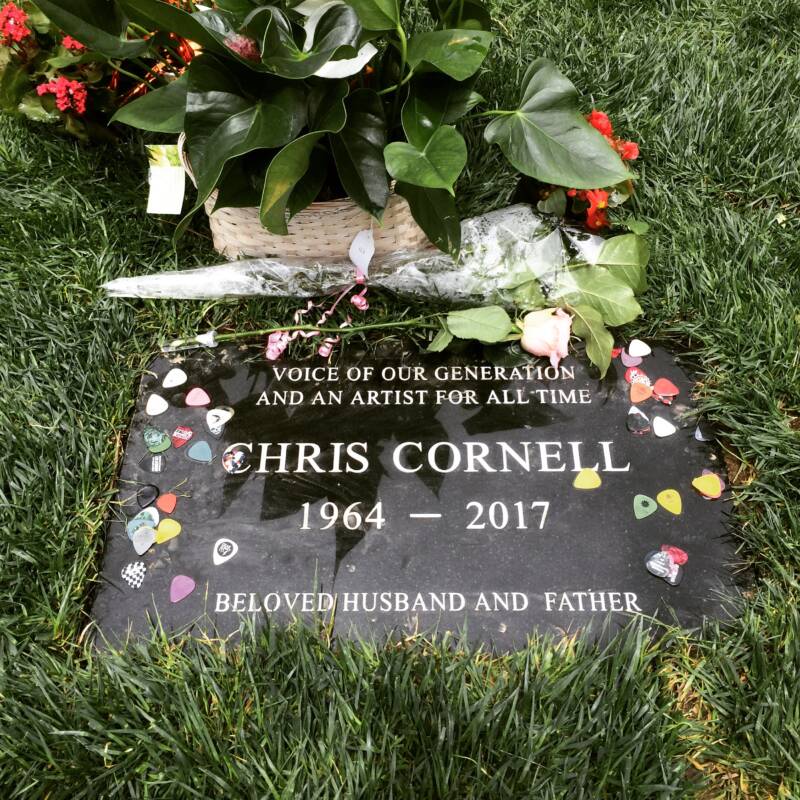 Wikimedia CommonsCornell is buried at the Hollywood Forever Cemetery in Los Angeles.

Unfortunately, the grunge icon’s death was followed by a fraught aftermath — which involved multiple legal battles. His family ended up suing his doctor for prescribing “dangerous mind-altering controlled substances” to Cornell, “costing him his life.” Meanwhile, Vicky Cornell and Soundgarden have also been embroiled in legal disputes over Cornell’s money.

Regardless of the questions that remain, Chris Cornell’s death has saddened countless family members, friends, and fans all around the world. Buried at the Hollywood Forever Cemetery, he is survived by three children, a powerful musical legacy, and a wife who has vowed to “do everything in my power to make sure other children don’t have to cry like mine have cried.”

After reading about how Chris Cornell died, learn why some people think Kurt Cobain was murdered. Then, take a closer look at the mysterious death of Jimi Hendrix.