Why Some People Think Kurt Cobain’s Suicide Was Actually Murder

In 1994, Kurt Cobain's death shocked the world. Fans were horrified that their idol had shot himself — but others believed that someone else had pulled the trigger. 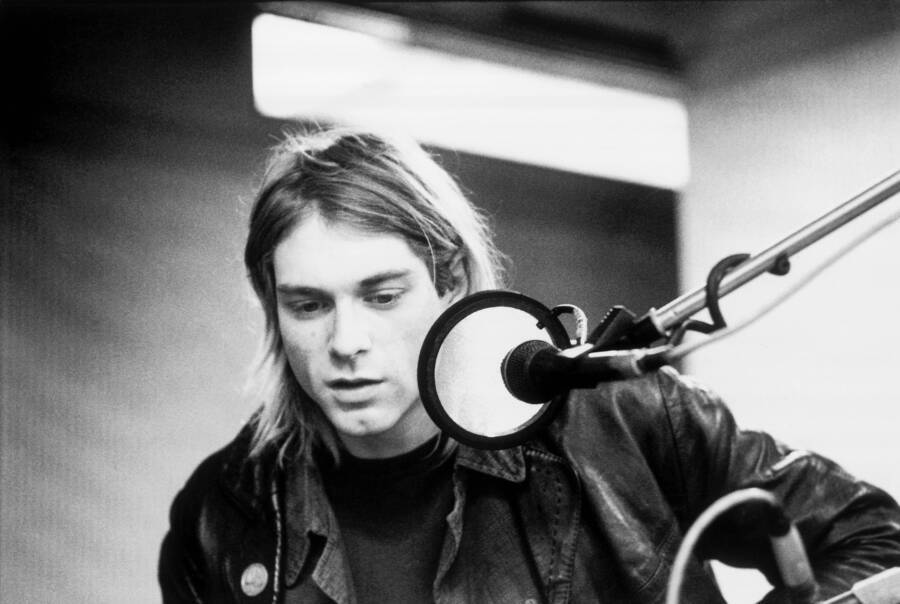 Michel Linssen/Redferns/Getty ImagesKurt Cobain was just 27 years old when he died on April 5, 1994. While his death has always been ruled a suicide, not everyone has accepted the official story.

Was Kurt Cobain murdered? Ever since the iconic Nirvana frontman was found dead in his Seattle home in April 1994, conspiracy theories have abounded about his short life — and tragic death.

Cobain’s death, then and now, has been ruled a suicide. But private investigator Tom Grant — who took a close look at the case while it was unfolding — believes that Kurt Cobain was murdered. Specifically, Grant thinks that Cobain’s wife Courtney Love was involved in a conspiracy that resulted in the murder of the grunge star.

While Grant has been the most vocal believer of this theory over the years, investigative journalists Ian Halperin and Max Wallace have also publicly supported this point of view. In fact, Halperin and Wallace have even published books that make the case that Kurt Cobain was murdered.

Perhaps most shockingly, Cobain’s own grandfather raised questions about his grandson’s death. And at one point, he was even quoted saying that he believed Cobain had been murdered.

However, many others believe that Grant’s idea is just a conspiracy theory. Seattle police detectives, a forensic linguist, and even Nirvana’s former manager have maintained their belief that the suicide ruling was correct. What’s more, many of Cobain’s family members and friends seem to have accepted the official story without raising questions — at least publicly.

So was Kurt Cobain murdered, or did he die by suicide as authorities ruled years ago? Let’s take a look at the possibilities.

The Life And Death Of Kurt Cobain 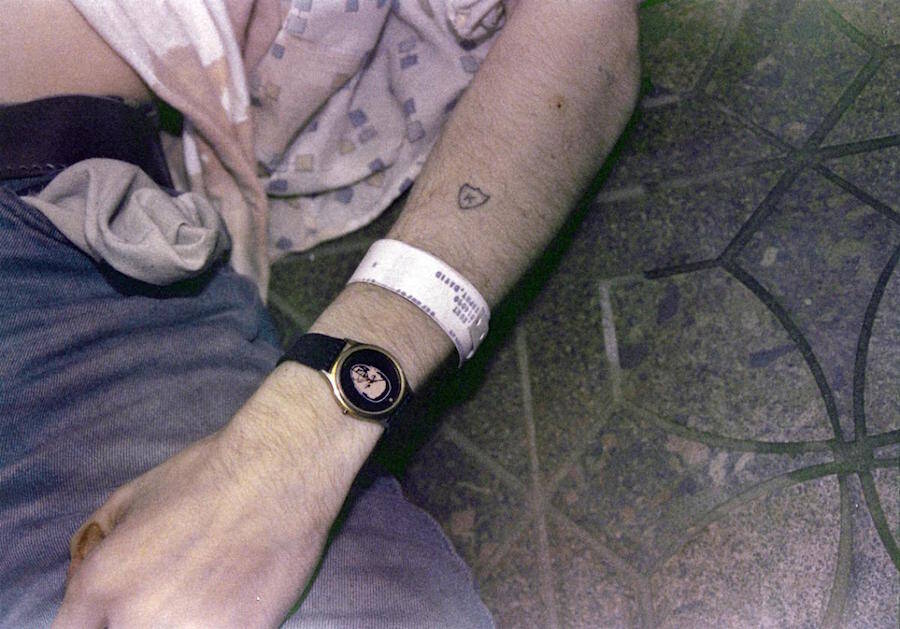 Before he became the lead singer of Nirvana, Kurt Donald Cobain was a sensitive boy growing up in the town of Aberdeen, Washington, at the tail-end of the 1960s. He showed interest in music from an early age.

Cobain’s first band, Fecal Matter, was formed in 1985 — after he dropped out of high school. But by the late 1980s, he had linked up with Krist Novoselic, forming the beginnings of what would become Nirvana. 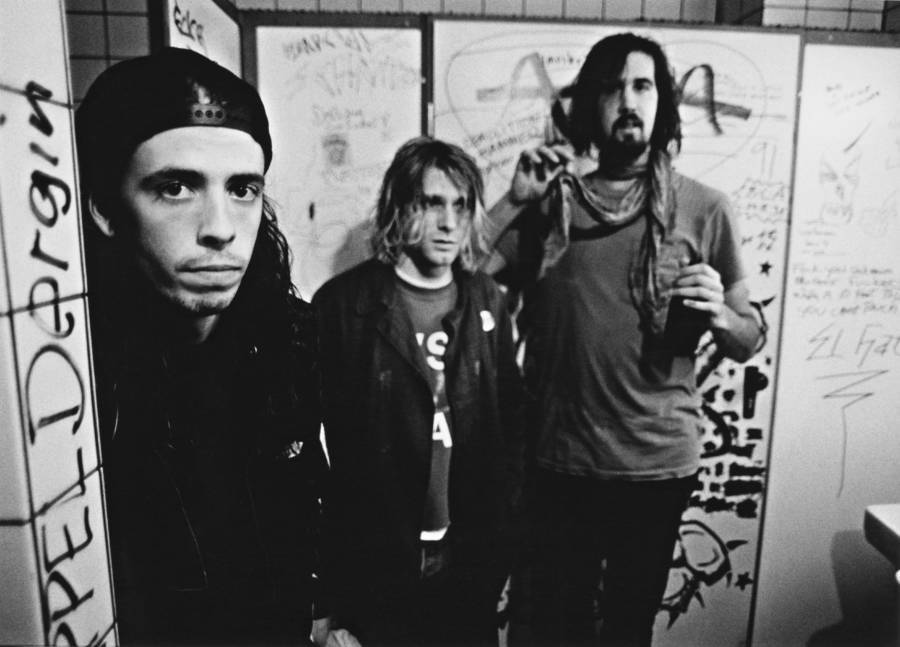 Paul Bergen/Redferns/Getty ImagesNirvana in Germany in 1991. While the band was on top of the world, Cobain was growing disillusioned with fame.

The band soon recorded Nevermind, their 1991 album released by Geffen Records. The massive success of the single “Smells Like Teen Spirit” thrust Nirvana into the mainstream and immediately popularized the “grunge” subgenre of alternative rock among the masses.

But as Nirvana ricocheted to the top of the charts — and into the pop culture stratosphere — Kurt Cobain was becoming increasingly disenchanted with the prospect of rock stardom.

Cobain felt that it went against his underground roots to become a mainstream star, and he hated the thought of being the “voice of a generation,” since he often felt like the media misinterpreted his message. 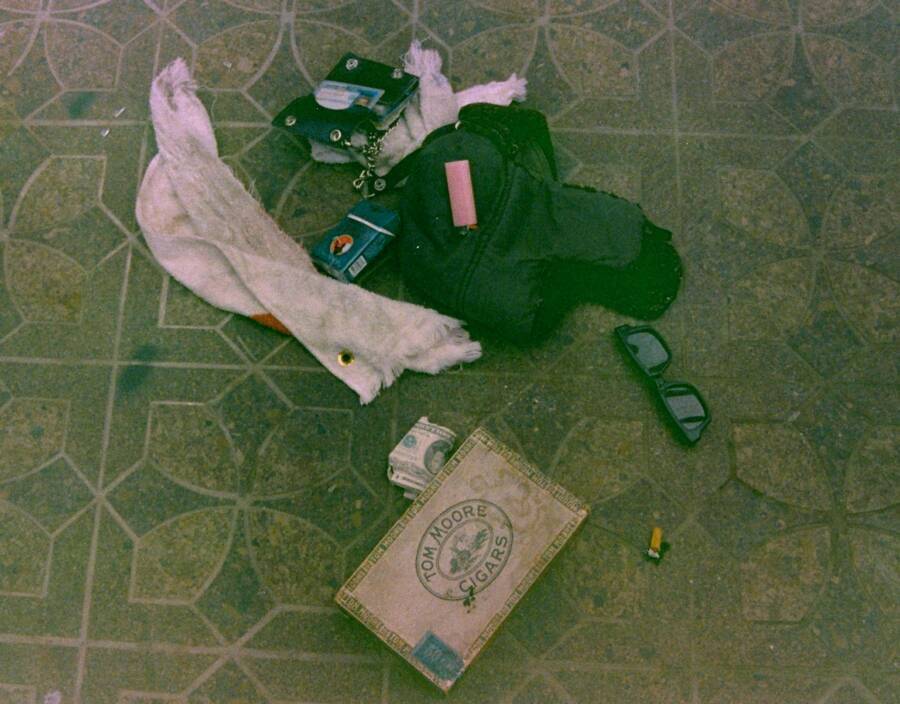 Seattle Police DepartmentCobain’s possessions, discovered at the scene of his death.

Plagued by depression, chronic stomach pain, and an addiction to heroin, Kurt Cobain’s final days were nothing if not tragic and harrowing. And according to Seattle police, it all culminated with a self-inflicted shotgun blast. The bullet had struck his head through his mouth.

Cobain’s family and friends were devastated by the news. Grief-stricken fans were left to ponder why their hero’s voice had been silenced. And so, perhaps it was natural for some of them to wonder if Kurt Cobain was murdered. But one man took his claims to the next level.

Just a few days before his death on April 5, 1994, Kurt Cobain ran away from the Exodus Recovery Center in Marina Del Rey, California.

In response, Courtney Love hired Tom Grant — a former detective with the Los Angeles County Sheriff’s Department who became a private investigator — to go looking for him.

It’s unclear why Love would’ve wanted to pose as O’Connor. But Grant used this information as part of his overall summary of events — hinting that Love was being elusive about her husband early on in the investigation. 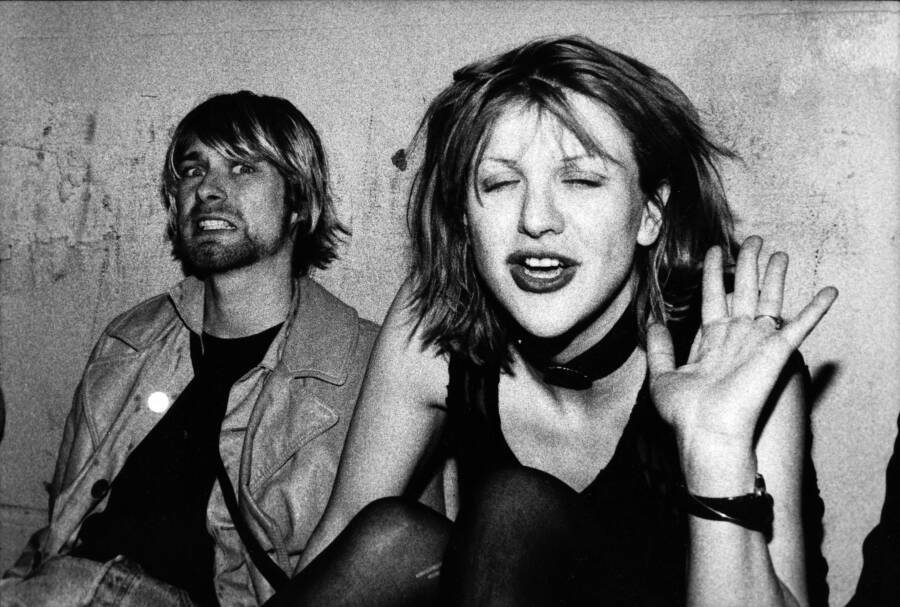 Lindsay Brice/Getty ImagesCobain’s lawyer claimed that he had called weeks before his death to ensure Love was removed from his will.

After Cobain’s body was discovered, Grant felt bewildered when he heard the suicide ruling. Despite the official story given by authorities, Grant clearly had some doubts. But it wasn’t until December 1994 that he started publicly raising questions about Cobain’s death — and talking about the “suspicious” things he’d observed during his investigation.

There are several reasons why Tom Grant thinks Kurt Cobain was murdered. But at the core of his reasoning lies the belief that Cobain couldn’t have injected himself with such a large amount of heroin — three times a lethal dose — and then been able to shoot himself. Grant believes that even a heroin addict would’ve been incapacitated and unable to pick up a gun.

Another reason why Grant believes that Kurt Cobain was murdered is because of inconsistencies in his suicide note. Grant thinks that the top half of Cobain’s letter was meant to announce that he intended to leave the music business behind. But since the bottom half of the note has different content — and mentions Love and Cobain’s daughter Frances — he thinks it could have been written by someone else.

A NewsChannel 3-12 interview with Tom Grant.

Grant’s theory was bolstered by claims made by Hank Harrison — Courtney Love’s estranged father — who believes that Love was involved in Cobain’s death. Grant’s theory was also explored — and expounded upon — by investigative journalists Max Wallace and Ian Halperin in two books, Who Killed Kurt Cobain? and Love & Death: The Murder of Kurt Cobain.

There was even a man named Eldon Hoke (nicknamed “El Duce”) who came forward and claimed that Courtney Love tried to offer him $50,000 to kill Kurt Cobain. Of course, it’s worth noting that Hoke was a shock rocker looking to promote his career. But eerily, just days after being interviewed about Cobain in 1997, Hoke was found dead after being run over by a train.

The theory that Kurt Cobain was murdered was also supported by the singer’s grandfather, Leland Cobain. He apparently held this belief for the rest of his life until he died in 2013.

Another Look At The Cobain Case 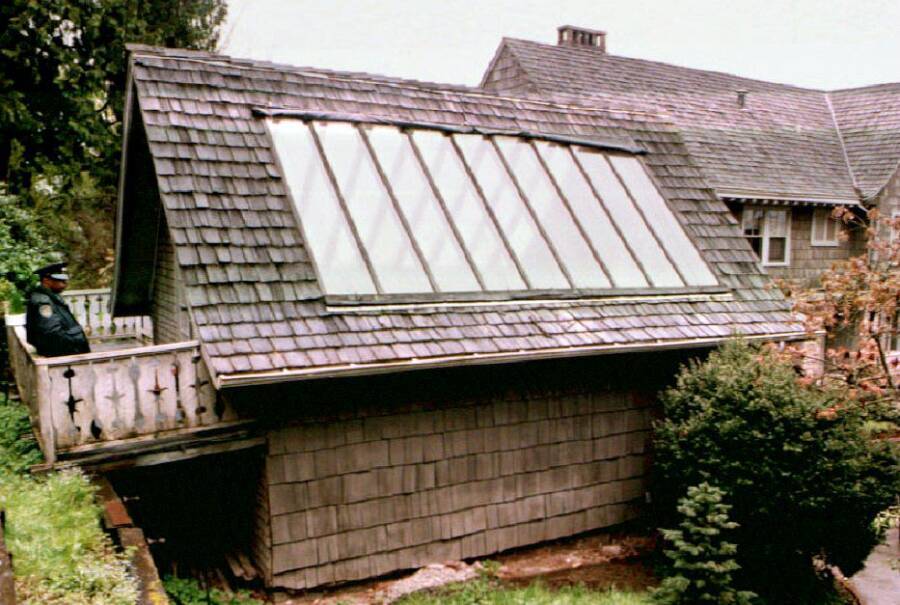 THERESE FRARE/AFP/GettyImagesThe greenhouse on Cobain’s property, where his body was found.

While Tom Grant’s theory about Kurt Cobain’s murder has clearly captivated many people, it’s also been disputed by Seattle police detectives, a forensic linguist, and people who knew Cobain better than Grant ever did.

In 2014, the Seattle police decided to review the Kurt Cobain case around the 20th anniversary of his death. After looking through all the evidence, Detective Mike Ciesynski publicly disputed the theory that Kurt Cobain was murdered. And in 2019, he offered some more details, claiming that the evidence still shows that Kurt Cobain died by suicide.

“Did I find any earth-shattering evidence that would change the medical examiner’s conclusion that Kurt committed suicide?” Ciesynski said. “No. In fact, I found evidence that strengthened that finding.”

He explained, “I located the receipt of the purchased shotgun shells from a Seattle Gun store that matched the time and location where a Seattle cab driver said he dropped off a male matching Cobain’s description after picking him up from the Cobain residence. Also, when I had questions about the positioning of the shotgun found in Cobain’s hand and the location of the spent shell casing, I interviewed an experienced weapons armorer who explained the dynamics of what had likely occurred.”

Ciesynski also spoke to one of the original case detectives, who said that Courtney Love had been very cooperative during the investigation and that a lot of work had been done on the case.

Meanwhile, in the years since Cobain’s death, a forensic linguist named Carole Chaski has analyzed Cobain’s infamous letter and said that her “results do not support the conspiracy theory that Courtney Love authored the bottom portion to make it look like a suicide note.”

Why Many Believe The Suicide Ruling 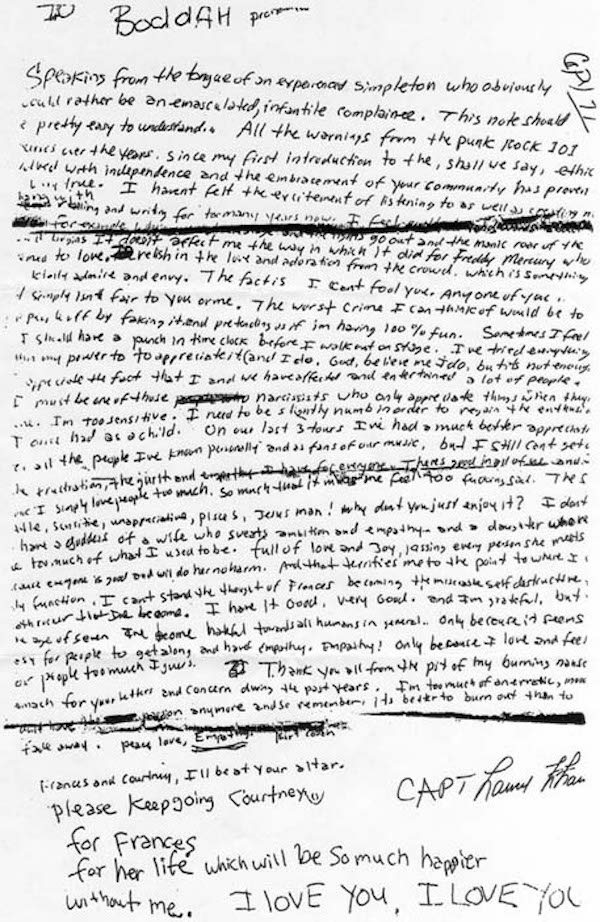 Public DomainCobain’s suicide note appears to differ in terms of handwriting and content toward the end, where the only allusions to death are made.

As for Cobain’s family members, his mother has seen the suicide note and said that she believed it was written by her son. Meanwhile, Cobain’s cousin Beverly Cobain (who is a registered nurse) said that the Nirvana frontman had a history of mental illness — including bipolar disorder.

She apparently believes that her cousin took his own life — and that he would’ve done so even if he weren’t famous.

“There is a strong possibility that Kurt would have taken his life no matter what he chose as his career,” she said. “His risk was very high: untreated bipolar disorder, drug addiction, prior suicides of family members, alcohol, violence and unpredictability in his childhood, poor self-esteem, violence in his married life. Kurt could have been a poster child for risk of suicide.”

Cobain’s bandmates, Krist Novoselic and Dave Grohl, have also seemingly accepted the suicide ruling. Even though both men have had a contentious relationship with Courtney Love in the past, neither of them have accused her — or anyone else — of murdering their friend. And in 2014, Love actually ended her longtime feud with the two.

Furthermore, Novoselic has said in an interview that he regrets that he didn’t do more to prevent Cobain from killing himself:

“There’s anger. There’s regrets. I was angry. It’s just a waste. You know it was the f*cking drugs. It’s pretty bad. All in 20-20 hindsight, you know. Kurt called me the first time he did heroin and he told me he did it. And I told him, ‘Don’t do it man. You’re playing with dynamite.'”

“He killed himself. I saw him the week beforehand, he was depressed. He tried to kill himself six weeks earlier, he’d talked and written about suicide a lot, he was on drugs, he got a gun,” he said. “Why do people speculate about it? The tragedy of the loss is so great people look for other explanations. I don’t think there’s any truth at all to it.”

There’s no denying that Kurt Cobain’s death left a gaping hole in the music world. There’s also no denying that some details about his death (like his suicide note) remain controversial in some circles. But despite Tom Grant’s claims and the support from some fans, the theory that Kurt Cobain was murdered remains for now just that — a theory.

After learning why some believe Kurt Cobain was murdered, read about the chilling mystery behind Natalie Wood’s death. Then, learn about the death of Jimi Hendrix potentially being more than an accident.