In 1994, Kurt Cobain Took His Own Life In This House — What’s Happened To It Since?

Although he only owned it for three months before he died by suicide on the property, Kurt Cobain's Seattle house has become a makeshift shrine to the Nirvana frontman. 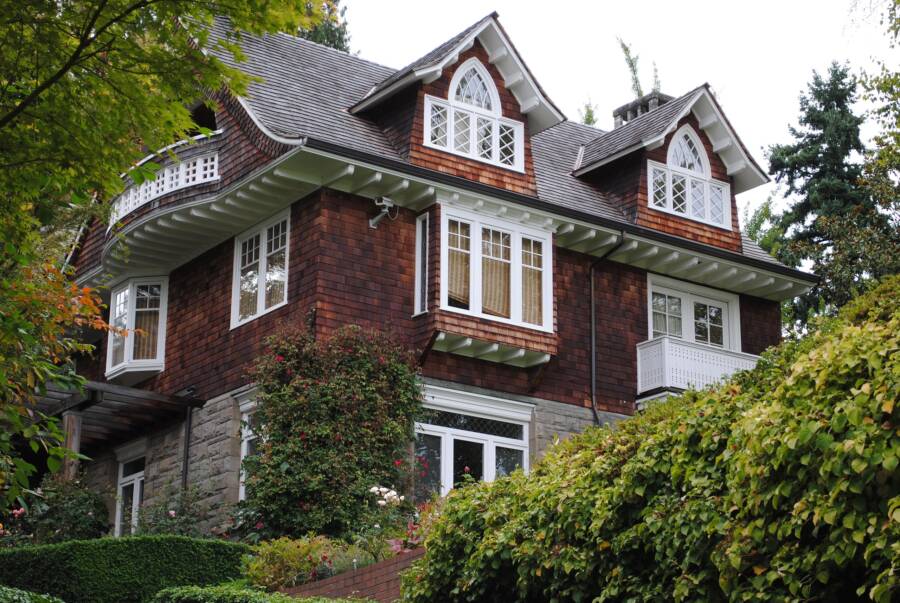 Etsy Ketsy/Wikimedia CommonsKurt Cobain’s house in Seattle became his after he bought it for $1.48 million in January 1994.

Nearly three decades have passed since Kurt Cobain’s house in Seattle became the site of one of the most tragic scenes in music history. On April 8, 1994, the Nirvana frontman was found dead by suicide in his on-site greenhouse, leaving a gaping hole in the hearts of rock fans everywhere.

It had only been Kurt Cobain’s house for three months before an electrician found his body. After fleeing from rehab and purchasing shotgun shells, Cobain had quietly moved back into his house without anyone knowing. Friends, relatives, and police had searched for him for days — only for a stranger to find him dead.

While Kurt Cobain’s suicide note supported the official cause of death, many still have questions and speculate that he may have actually been murdered. But even for those who avoid such controversy, the tragedy remains. To this day, fans make pilgrimages to a park near the tree-nestled property to mourn.

Indeed, although Kurt Cobain’s house has since been bought and renovated several times, it remains a meditative hub for those still grieving his death.

Kurt Cobain’s Homes: From Growing Up In Aberdeen To The Hollywood Hills

Kurt Donald Cobain was born on Feb. 20, 1967, in Aberdeen, Washington. Influenced by The Beatles and Ramones, he started singing and playing guitar at a young age. He was nine years old when his parents got divorced, rendering him rebellious, depressed, and desperate to have a stable family of his own. 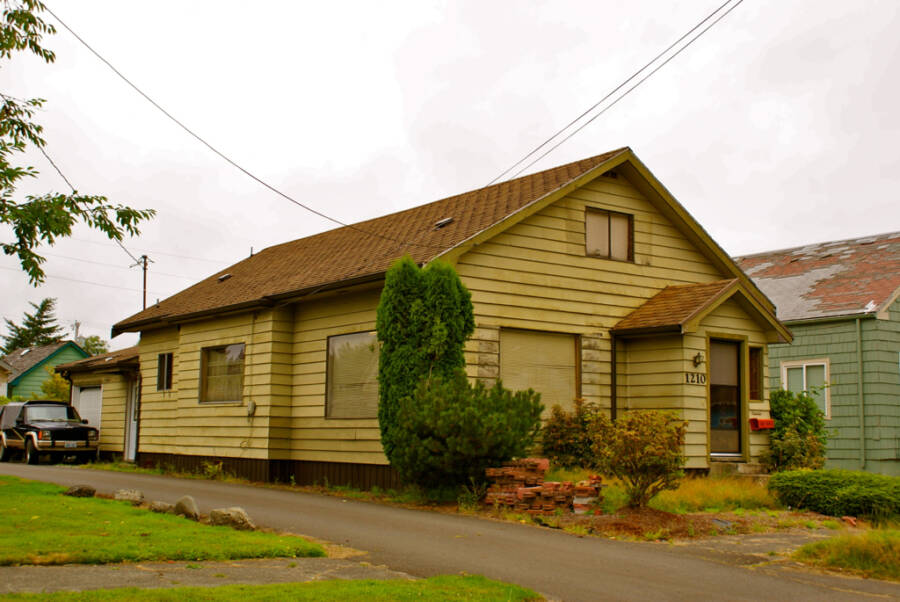 CK/FlickrKurt Cobain’s childhood home in Aberdeen, Washington, where he lived until 1984.

Although today Kurt Cobain’s house growing up is a landmark, he hardly spent time there. He dropped out of Aberdeen High School to start a band and find kindred spirits. He formed Nirvana after meeting bassist Krist Novoselic and drummer Chad Channing in 1987. Their debut album, Bleach, was released to local success in 1989, but Nirvana truly arrived after Dave Grohl replaced Channing.

Their 1991 follow-up Nevermind took the industry by storm and crowned Cobain king of its nascent grunge genre. However, he was uncomfortable with his newfound fame and graduated from marijuana to heroin to self-medicate his lifelong stomach pains. He also started dating singer Courtney Love, who shared his vices.

Cobain married Love mere days after Nirvana wrapped their 1992 “Pacific Rim” tour in Honolulu, Hawaii. According to RadioX, only eight people attended the private ceremony on Waikiki Beach on Feb. 24. Cobain wore pajamas and a Guatemalan purse, while Love wore a dress once owned by actress Frances Farmer.

While Grohl attended the ceremony, Novoselic boycotted it out of fear that Cobain was still using heroin and a general distrust of Love. Whether anyone involved knew it at the time or not, Love was already pregnant with Cobain’s daughter — who was born on Aug. 18, in Los Angeles.

The young family swiftly bought a 2,500-square-foot home in the Hollywood Hills at 6881 Alta Loma Terrace. Constructed in 1921, the house had three floors with balconies and a fireplace. Kurt Cobain’s house flooded while they were out of town one weekend, however, spurring Cobain’s return to Seattle — and the search for another house.

Inside Kurt Cobain’s House In Seattle

The Cobains found their beautiful new home in the affluent Denny Blaine subdivision of Seattle in January 1994, according to The New York Post. The 7,000-square-foot property at 171 Lake Washington Boulevard sat on nearly one acre of land and featured a winding driveway leading to a hilltop road overlooking Lake Washington.

The Queen Anne-style house was built in 1902 and featured four bedrooms, five baths, and a greenhouse nestled atop a two-car garage. It cost Cobain $1.48 million and was surrounded by lush greenery. The house neighbored Viretta Park, which has since become an unofficial memorial site. 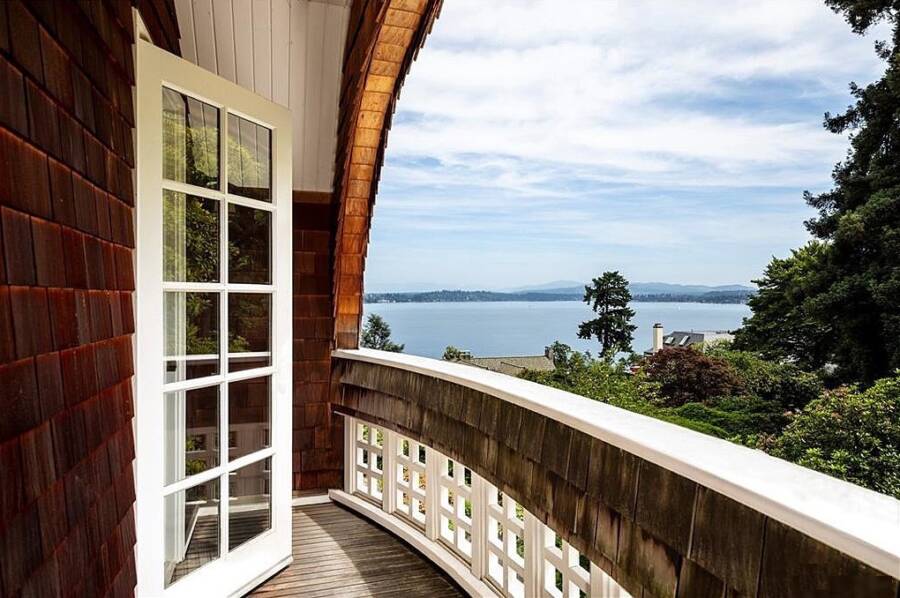 Kurt Cobain’s house was everything his family wanted: spacious, remote, and quiet. But it tragically only served them for three months before it became the scene of
his suicide, as Cobain’s struggles with fame and drug use skyrocketed. The tour of Nirvana’s third album In Utero launched its European leg in February.

Before the Munich show on March 1, Cobain and his wife argued over the phone. Afterward, he told his opening act that he planned to divorce Love and intended to quit Nirvana for good. Cobain ended the show within an hour and forced the band to take a 10-day break. He flew to Rome to meet his family, only to overdose on Rohypnol on March 4.

Kurt Cobain’s suicide note from that attempt stated that he would “rather die than go through another divorce,” referring to both his childhood and current marital struggles. Cobain ultimately returned to Seattle, where his wife, relatives, and bandmates staged an intervention on March 25, spurring him to leave and stay with acquainted drug dealers. 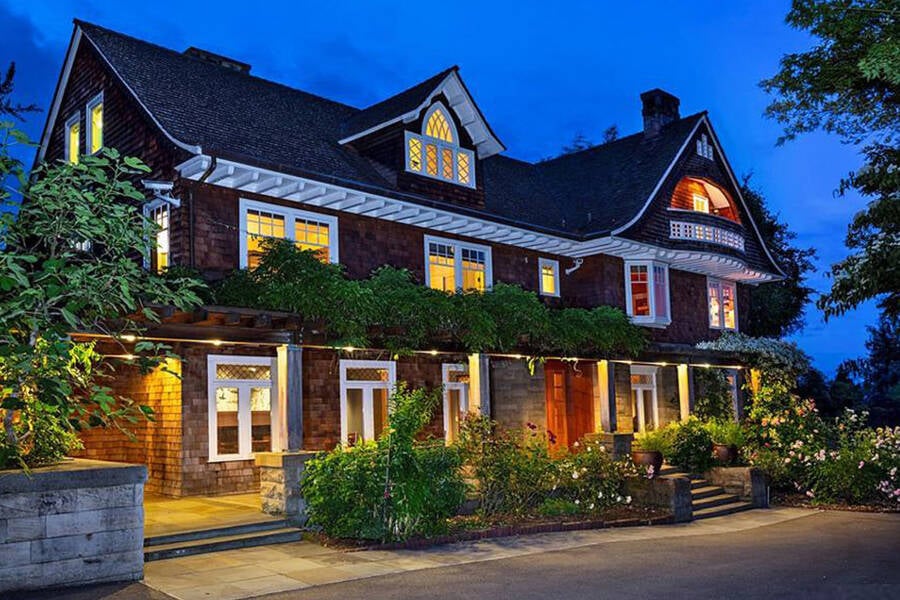 Ewing & Clark, Inc./Northwest Multiple Listing ServiceCobain’s home had a two-car garage with a greenhouse atop.

While he eventually flew to California to enter the Exodus Recovery Center, he asked his friend Dylan Carlson to purchase a 20-gauge shotgun for him beforehand. He left it at home before flying to Los Angeles, only to escape the facility on April 1 — and spend one last week at his house alone.

The Home On Lake Washington Recently Sold For $7.1 Million

An electrician found the body at Kurt Cobain’s house in a greenhouse above the detached garage. The coroner’s report deemed Kurt Cobain’s death a suicide by gunshot. While the shotgun, shells, and new suicide note near his body suggested as much, well-documented theories that Kurt Cobain was murdered have since entered the public discussion.

Courtney Love had the garage and greenhouse demolished before selling the house for $2.9 million in 1997 to Seattle businessman Euyang Walter Jr. Love moved back to Los Angeles and tried to deal with the aftermath of her husband’s death. While some Nirvana fans treated her like a grieving widow, others treated her like a murder suspect.

“I don’t like coming to Seattle much,” she said in 2014. “It is beautiful, objectively. The arboretum is great. But it freaks me out for obvious reasons… It was war, the time after Kurt died.” 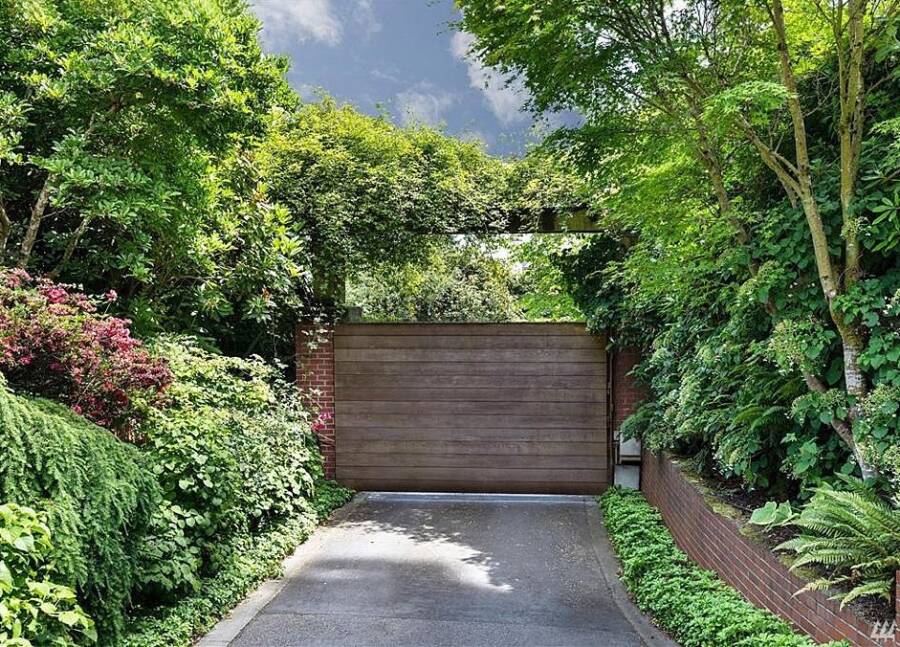 Kurt Cobain’s house was first renovated in 1999, according to Curiosity. Now 65-years-old, Walter and his family lived in the home for 23 years before listing it for $7.5 million in 2019. Final renovations concluded in July 2021 and left the home with a wine cellar, walk-in closet, and hardwood flooring in every room.

Walter ultimately settled for $7,050,000 on Aug. 24, 2020, for Kurt Cobain’s house in Seattle. What was once the private home of a beloved rockstar and the quietly ominous scene of his debated suicide had suddenly become the happy new home of an anonymous buyer, who purchased the home under the LLC CSK Washington Investments.

As for Kurt Cobain’s childhood home in Aberdeen, the 1,522-square-foot house was added to the Washington State Department of Archaeology and Historic Preservation Heritage Register in June 2021. Meanwhile, his former Los Angeles property was sold for an undisclosed price to an anonymous buyer that same month.

After learning about Kurt Cobain’s house, take a look at Kurt Cobain’s journals. Then, learn about Marilyn Monroe’s house where she ultimately took her own life.