Natalie Wood’s Death And The Chilling Mystery Behind It

Natalie Wood died off the coast of California's Catalina Island on November 29, 1981 — but some say her drowning may not have been an accident.

Before Natalie Wood’s death brought her life to a tragic end, she was an Academy Award-nominated actress who was in some of the most famous films of all time. She co-starred in Miracle on 34th Street when she was only eight years old. When she was a teenager, she earned her first Oscar nomination.

Critics and fans alike would later say that Wood was the silver screen symbol of a woman in transition. Few stars had ever made the successful leap from the hurdles of child stardom to mature onscreen roles for adults. 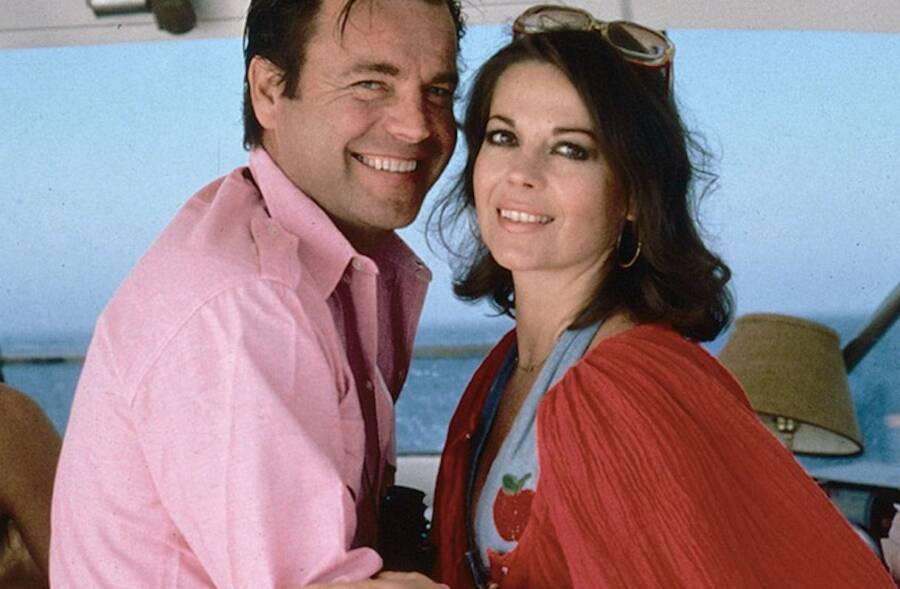 Steve Schapiro/Corbis via Getty ImagesNatalie Wood’s death occurred aboard the yacht Splendour off the coast of California’s Santa Catalina Island. She’s pictured here, alongside husband Robert Wagner, aboard the Splendour several years before.

Natalie Wood was so talented and beloved that she was nominated for three Oscars before she turned 25. Her larger-than-life presence on camera was only matched by the glamorous offscreen life she’d made for herself.

The San Francisco-born star had truly taken Hollywood by storm. She worked with American legends such as John Ford and Elia Kazan. Her romantic conquests included the likes of Elvis Presley before she ultimately tied the knot with actor Robert Wagner in 1957.

Natalie Wood lived the American Dream, though it would tragically devolve into a Hollywood nightmare. It all came crashing down during a fateful weekend in Southern California. 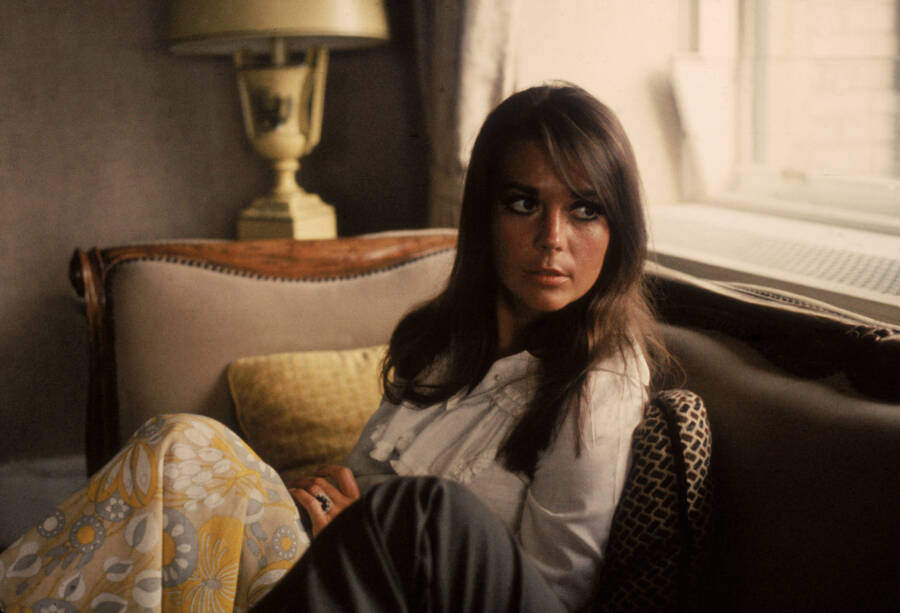 Tim Boxer/Getty ImagesNatalie Wood’s mother was told by a fortune teller that she should “beware of dark water.”

Natalie Wood was only 43 years old when her body was found floating off the coast of Catalina Island. Aboard a yacht named Splendour the previous night with her husband Robert Wagner, co-star Christopher Walken, and boat captain Dennis Davern, she had disappeared overnight.

The discovery of her body only yielded more questions than answers. Though her death was initially classified as an accident and “probable drowning in the ocean,” Natalie Wood’s death certificate would later be updated to “drowning and other undetermined factors.” Her widowed husband, currently 89 years old, is now considered a person of interest.

What really happened aboard the Splendour that night in 1981 remains a mystery. Certain facts, however, remain alarmingly undeniable.

Natalie Wood was born Natalia Nikolaevna Zakharenko on July 20, 1938, in San Francisco, California to an alcoholic father and stage mother. According to Town & Country, studio executives changed the young starlet’s name shortly after she started acting.

Her mother Maria was highly eager to make Wood the breadwinner and regularly pushed her to audition for roles despite her young age. 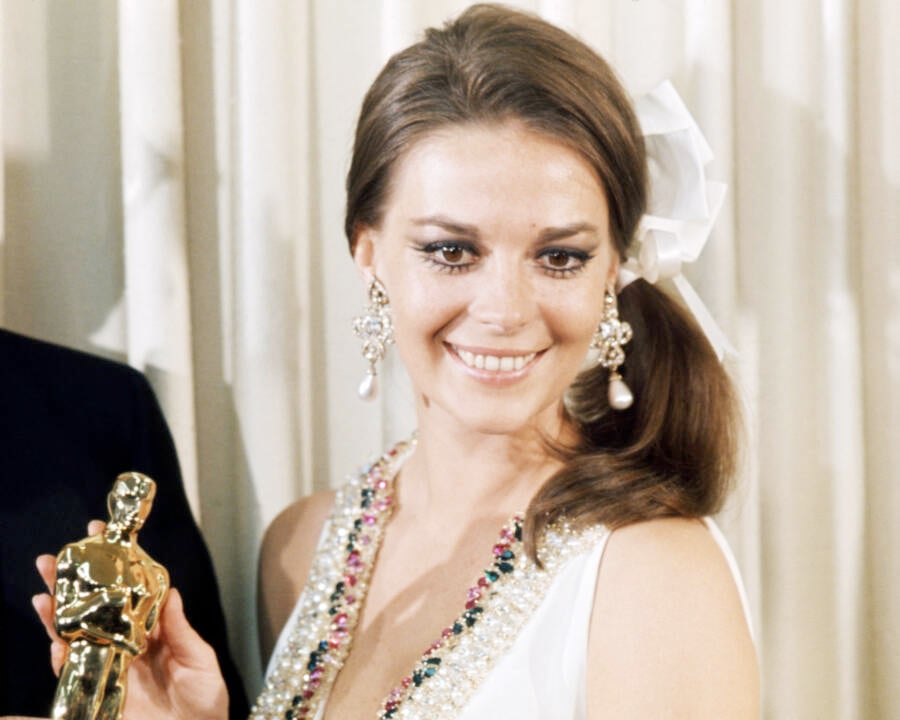 Silver Screen Collection/Getty ImagesNatalie Wood at the 40th Academy Awards. She was nominated for three of them before she turned 25. April 10, 1968.

Maria’s encounter with a fortune teller when she herself was a child yielded an ominous premonition. The gypsy said her second child “would be a great beauty” and famous, but that she should “beware of dark water.”

Wood quickly grew into a professional, memorizing not only her lines but also everyone else’s. Dubbed “One Take Natalie,” she was nominated for an Oscar for her role in Rebel Without a Cause when she was just a teen.

But behind the scenes, her love life was rocky. Wood had affairs with both the director, Nicholas Ray, and co-star Dennis Hopper. She also dated stars like Elvis Presley before she met Robert Wagner at age 18.

The two married in 1957 but divorced five years later. They found their way back to each other in 1972, remarried, and had a daughter. 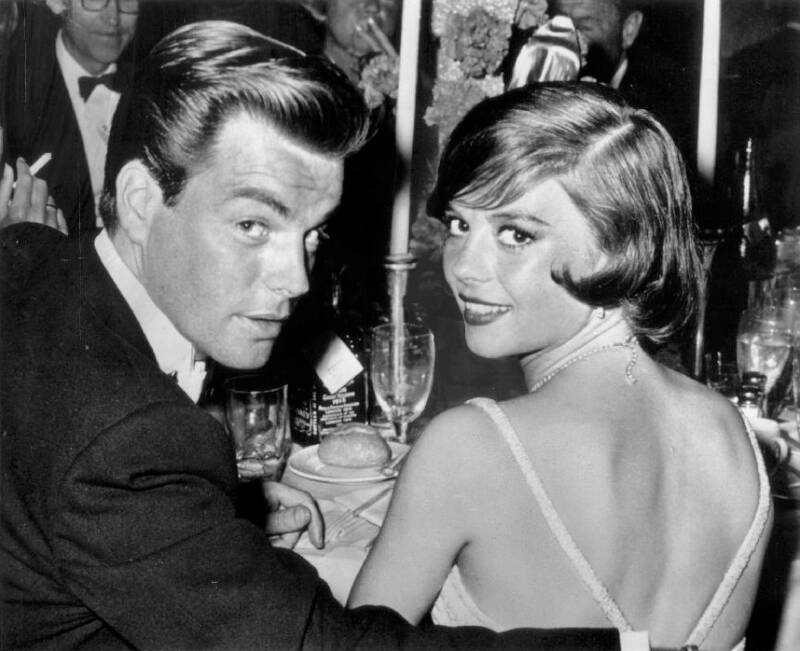 Wikimedia CommonsRobert Wagner and Natalie Wood at the Academy Awards dinner in 1960.

Though Woods’ career began to wane, she did act opposite Oscar winner Christopher Walken in her last picture, Brainstorm. The two became fast friends — with some suspicion that they were dating.

“It wasn’t like they were lovey-dovey on the set or anything like that, but they just had a current about them, an electricity,” said the film’s first assistant director, David McGiffert.

It was Thanksgiving weekend of 1981 when their alleged relationship arguably became a problem. Wood and Wagner invited Walken to join their sailing trip around Catalina Island — and that’s when everything went wrong.

The Death Of Natalie Wood

What happened on the evening of November 28, 1981, is unclear. What is clear is that authorities recovered Wood’s body the following morning, floating a mile away from the Splendour. A small dinghy was found beached nearby.

The investigator’s report chronicled the events as follows: Wood went to bed first. Wagner, having stayed up chatting with Walken, later went to join her, but noticed that both she and the dinghy were gone.

Wood’s body was found around 8 a.m. the next morning in a flannel nightgown, down jacket, and socks. According to Biography, the chief medical examiner in the L.A. County Coroner’s Office announced her death was an “accidental drowning” on November 30. 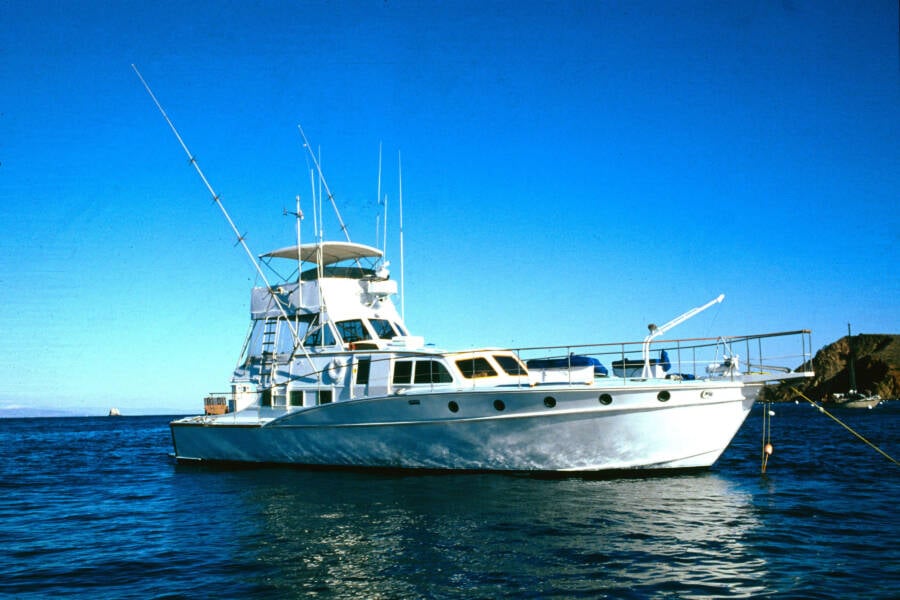 The autopsy showed Natalie Wood had multiple bruises on her arms and an abrasion on her left cheek. The coroner explained Wood’s bruises as “superficial” and “probably sustained at the time of drowning.”

But in 2011, Captain Dennis Davern admitted that he left out key details regarding the night’s events. And as the years went on, Wood’s loved ones only had more questions.

How Did Natalie Wood Die?

Davern said the weekend was filled with arguments — and that the main issue was the glaring flirtation between Walken and Wood.

“The argument started the day before,” said Davern. “The tension was going through the whole weekend. Robert Wagner was jealous of Christopher Walken.” 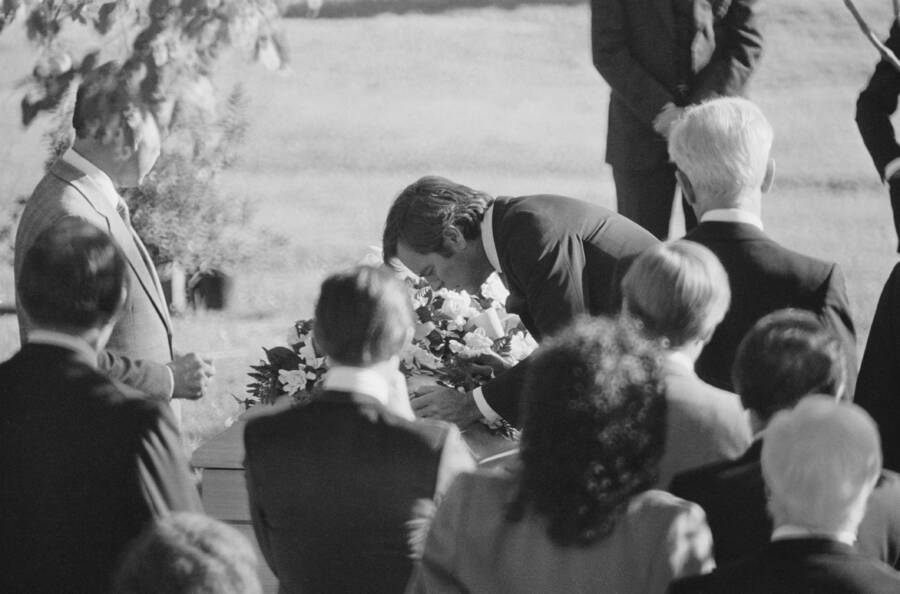 Davern said Wood and Walken spent hours at a Catalina Island bar before Wagner showed up, furious. All four then went to dinner at Doug’s Harbor Reef Restaurant, where they shared champagne, two bottles of wine, and cocktails.

Employees couldn’t recall whether it was Wagner or Walken, but one of them threw a glass at the wall at some point. At around 10 p.m., they used their dinghy to get back to the Splendour.

Accounts have changed across the years. Walken did admit to investigators that he and Wagner had a “small beef,” but that it regarded the couple’s prolonged film shoot-related absences from their child. 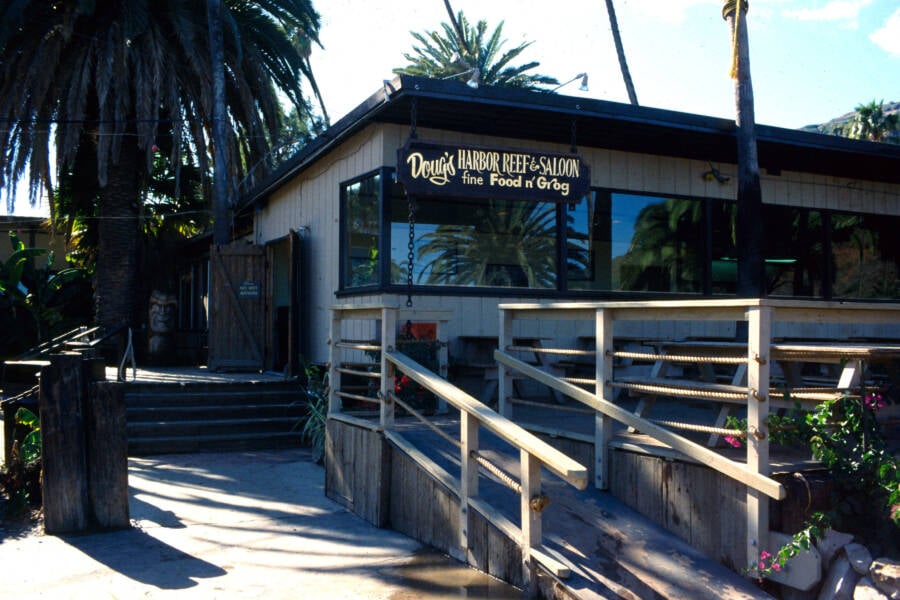 Though reports initially stated that the fight died down, Davern claimed otherwise in 2011. He said everyone continued drinking when back on board and that Wagner was enraged. He allegedly broke a wine bottle over a table and screamed at Walken, “Are you trying to f–k my wife?”

Davern remembered Walken retreating to his cabin at this point, “and that was the last I saw of him.” Wagner and Wood returned to their room, too, when a shouting match ensued. Most ominously, Davern said he later heard the fight continue on deck — before “everything went silent.”

When Davern checked on them, he saw only Wagner, who said, “Natalie is missing.”

Wagner told Davern to go look for her, and then said “the dinghy is missing too.” The captain knew Natalie was “deathly afraid of water,” and doubted she’d taken the dinghy out alone.

Key witness Marilyn Wayne, who was in a boat 80 feet away that night, told Sheriff’s investigators she and her boyfriend heard a woman screaming around 11 p.m.

Their call to the harbormaster went unanswered, and with a party on another boat nearby, the pair concluded it may have been a joke. As for Wagner’s hesitance to call anyone, he did eventually did — at 1:30 a.m.

This, among other things, left Wood’s sibling Lana confused.

“She would have never left the boat like that, undressed, in just a nightgown,” she said.

But that’s exactly how her body was found, mere hours later. The investigation continued throughout the decades, however, with new details, questions, and suspicions arising as recently as 2018.

Changes In Natalie Wood’s Cause Of Death

The case was reopened in November 2011 after Davern admitted he lied during the initial investigation and alleged that Wagner was “responsible” for Natalie Wood’s death. Since the bombshell report, Wagner has refused to talk to authorities. However, Walken has cooperated fully with investigators.

According to the BBC, Wood’s death certificate was later amended from accidental drowning to “drowning and undetermined factors.”

In 2018, a spokesperson for the Los Angeles Sheriff confirmed that Natalie Wood’s case was now undeniably a “suspicious” death. And Robert Wagner was officially named a person of interest.

“As we’ve investigated the case over the last six years, I think he’s more of a person of interest now,” said L.A. County Sheriffs Department Lieutenant John Corina. “I mean, we know now that he was the last person to be with Natalie before she disappeared.”

“I haven’t seen him tell the details that match… all the other witnesses in this case,” he added. “I think he’s constantly… he’s changed the — his story a little bit… and his version of events just don’t add up.”

Investigators made multiple attempts to speak with him, to no avail.

“We would love to talk to Robert Wagner,” said Corina. “He’s refused to talk to us… We can never force him to talk to us. He has rights and he can not talk to us if he doesn’t want to.”

The incident was most recently explored in HBO’s documentary What Remains Behind.

Walken hasn’t publicly spoken much on the events of that night, but he did appear to believe that it was an unfortunate accident.

“Anybody there saw the logistics — of the boat, the night, where we were, that it was raining — and would know exactly what happened,” said Walken in a 1997 interview.

“You hear about things happening to people — they slip in the bathtub, fall down the stairs, step off the curb in London because they think that the cars come the other way — and they die.”

Meanwhile, Corina maintains that the tragedy was likely no accident.

In the end, Robert Wagner’s refusal to cooperate is legal and may simply stem from a desire not to revisit the tragedy. Natalie Wood’s death may have been caused intentionally, but the truth is, we’ll probably never know for sure.

After learning about the tragic death of Natalie Wood, read about the true story of Sharon Tate — from Hollywood starlet to brutalized Charles Manson victim. Then, learn about the strange deaths of 16 historic and famous figures.