The legend of an ax-wielding man in a rabbit suit haunting Fairfax County started in the 1970s and continues to this day, with one local overpass even dubbed "Bunny Man Bridge." 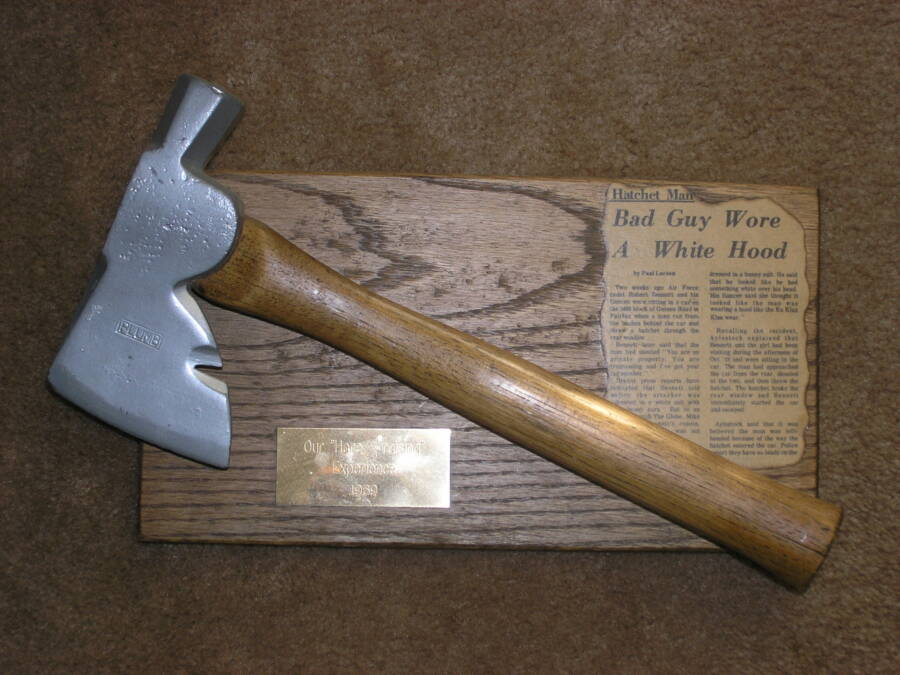 Wikimedia CommonsThis hatchet was given to police after Robert Bennett and his fiancé’s alleged encounter with the Bunny Man. The police gave it back.

For generations, the story of the Bunny Man has been passed around at sleepovers, campfires, and Halloween parties in Northern Virginia. An ax-wielding killer who appears in a bloody rabbit costume, the Bunny Man allegedly murders anyone who dares speak his name three times while standing beneath the “Bunny Man Bridge” in Fairfax County, Virginia at midnight.

What began as two minor incidents involving a man wearing bunny ears in 1970 has transformed into an epic urban legend of escaped convicts, disemboweled children, and half-eaten rabbits.

While the details of the legend have changed over the years, with variations on the mysterious murderer’s history, motivation, and appearance, one thing remains the same: his terrifying bunny costume.

Over the past 50 years, the tale has inspired countless variations and creative endeavors, including a slasher film and a rock opera. But what’s the truth behind the infamous Bunny Man legend?

The Real-Life Origins Of The Bunny Man Legend

According to “The Bunny Man Unmasked,” a research project written by Brian A. Conley while he was working as Fairfax County Public Library’s historian and archivist, Bunny Man’s story began 50 years ago.

On Oct. 19, 1970, a cadet at the U.S. Air Force Academy named Robert Bennett was driving with his fiancee on the rural roads of Burke, Virginia, near midnight. They were returning from a football game and decided to stop and visit Bennett’s uncle, who lived nearby. Bennett parked his car in a field across the street from his uncle’s house on Guinea Road, but before he and his fiancee could get out, they saw something move near the rear window.

Suddenly, there was a loud crash, and the front passenger window shattered. A man was standing outside shouting, “You’re on private property, and I have your tag number.” Bennett quickly drove away, but he later found a hatchet on the floorboard of his car.

However, just 10 days later, the terrifying Bunny Man would rear his head once again. On Oct. 29, 1970, the confusion was cleared up when a construction security guard named Paul Phillips reported seeing a man in a gray, black, and white rabbit costume standing on the porch of a home that was under construction. Phillips, who was patrolling the new Kings Park West subdivision on Guinea Road, approached the man around 10:30 p.m.

According to a contemporaneous article published in The Minneapolis Star, the man told Phillips, “You are trespassing. If you come any closer, I’ll chop off your head.” The costumed criminal then began chopping at a porch post with a hatchet.

Phillips left to retrieve his gun, but by the time he returned the man had disappeared into the trees. The guard told police the suspect was about 20 years old, five feet and eight inches tall, and 175 pounds.

News of the two incidents spread quickly, and within two weeks local police had received more than 50 reports of sightings of the mysterious “Bunny Man.”

Horror At The ‘Bunny Man Bridge’ 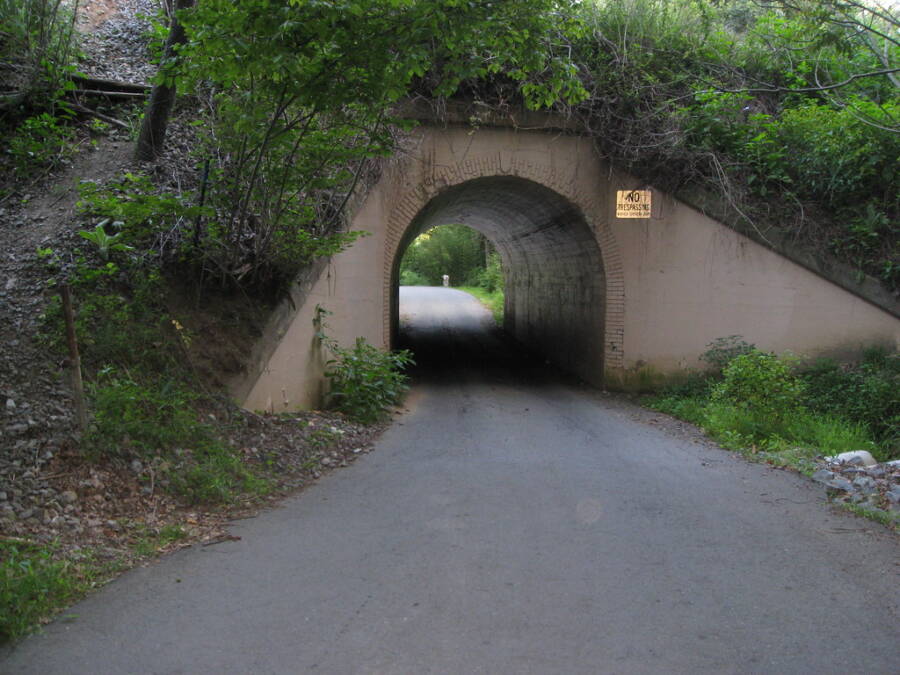 Public DomainThe Colchester Overpass is said to be where Bunny Man appears every Halloween.

As word of the Bunny Man spread verbally through the years, a story posted on the Castle of Spirits website around 1999 documented how drastically the legend had departed from fact.

A man named Timothy C. Forbes penned the extensive tale that he claimed started in 1904, when a bus transporting prisoners from an asylum in Clifton, Virginia, crashed and the convicts escaped. Police found all but two of them: Marcus Wallster and Douglas Grifon.

While on the hunt for Wallster and Grifon, investigators continually stumbled upon the carcasses of dismembered and half-eaten rabbits in the forest. Then, while searching near the Colchester Overpass, a railway bridge near Clifton that is today known by locals as the “Bunny Man Bridge,” they found Wallster’s body. His cold, stiff hand was clutching a handmade hatchet.

A year later, according to the legend, the Bunny Man started appearing to people wandering in the tunnel beneath the bridge. On Halloween night, three teenagers were drinking in the tunnel when the clock struck midnight. Suddenly, a bright flash appeared, and within seconds all three teens were hanging from the overpass. Their throats were slashed, and they’d been disemboweled.

The next Halloween, the same thing happened to six other teenagers. Over the years, people began avoiding the tunnel on Halloween night, but every few decades a brave group of kids would test the legend — and die the same horrible death as their predecessors.

Conley thoroughly debunked this version of events in his research. There is no record of any such murders in the county, and there has never been an asylum in the area. The Bunny Man wasn’t even mentioned in the local news until 1970. But this is the story that has stuck over the decades, despite having no basis in fact.

Theories About The Real ‘Bunny Man’ 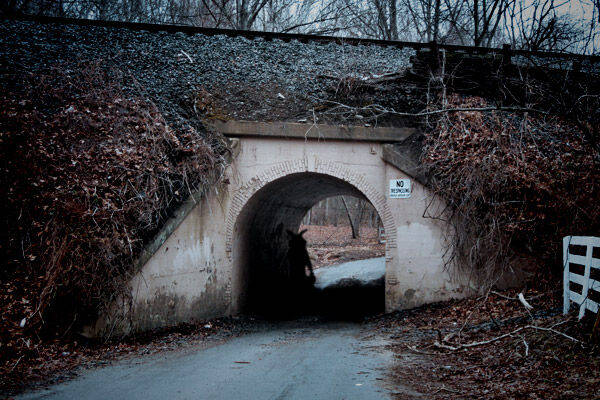 TwitterThe details of the Bunny Man legend change depending on who is telling it — but it always involves a terrifying, ax-wielding man in a rabbit suit.

In 2014, the Northern Virginia-based band Mantua Finials released a three-CD rock opera about the legend of the Bunny Man, featuring songs such as “Bunny Suite” and “All Hallows Eve.” Written by band members Jim Waters and Chris Piller, the rock opera weaves fact with folklore to tell the story behind the legend.

Waters, who grew up in Northern Virginia, has his own theories about the Bunny Man. He told the Washington Post, “There were some old homesteads in the land adjacent to Kings Park West, a community that was being built. It seems to me there’s a likelihood that one of these kids who may have lived on one of those old homesteads may have been the Bunny Man.”

He continued, “Nobody likes it when a brand-new community is being built right next to your house, especially if you’re fond of the woods.”

But Officer W.L. Johnson with the Fairfax County Police Department — who investigated the Bunny Man case back in 1970 when the first reports came in — isn’t sure he ever actually existed at all.

In his official report on the case, Johnson wrote, “After a very extensive investigation into this and all other cases of this same nature, it is still unsubstantiated as to whether or not there really is a white rabbit.”

He went on, “Upon interviewing everyone in this case that may have had any knowledge of any incidents concerning a white rabbit, there has been no significant information uncovered that would lead to the identity of the person or persons that were posing as a white rabbit.”

“This case will be marked as inactive,” Johnson concluded.

What started as one or two potential sightings of an ax-wielding man in rabbit ears has spiraled into one of the biggest urban legends on the East Coast. Today, the Bunny Man Bridge is plastered with “No Trespassing” signs in an effort to dissuade curious onlookers from clogging up traffic on the one-lane road.

And according to the Centreville Patch, police spent Halloween night in 2011 turning away more than 200 thrill-seekers heading toward the Colchester Overpass. Some were from as far away as Pennsylvania.

Despite the efforts to keep people away, the legend of the Bunny Man continues to endure, though the details are far from the truth.

After reading about the Bunny Man, learn about the true stories behind 11 more urban legends, from Candyman to Slender Man. Then, read about the terrifying legend of Goatman’s Bridge and the goat demon that haunts it.