Codex Seraphinianus, Bizarre And Beautiful Art From An Alien World

In an attempt to remind readers how language appears to those incapable of understanding it, Codex Seraphinianus has baffled critics for decades.

Codex Seraphinianus is the fantastical brainchild of Luigi Serafini. An artist, architect, and designer, Serafini drew on his multidisciplinary background to craft an encyclopedia of a world of impossibilities.

Published in 1981, Codex Seraphinianus wowed readers with its intricate illustrations and its original premise. The book first appears as completely nonsensical – an encyclopedia about an alien world complete with alien handwriting – but there is a method to the madness. Luigi Serafini took two and a half years to complete the project and since, there have been numerous academic papers and essays written about it. 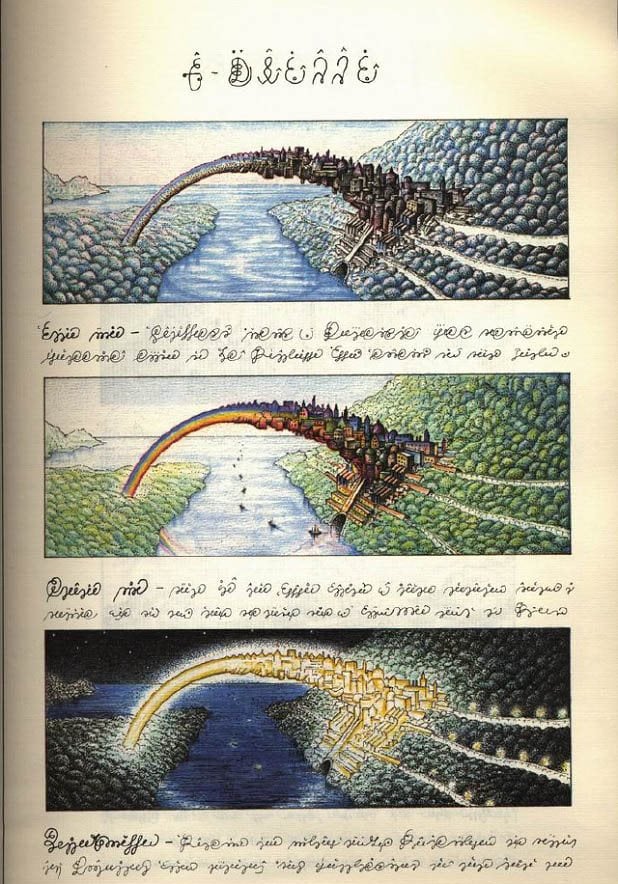 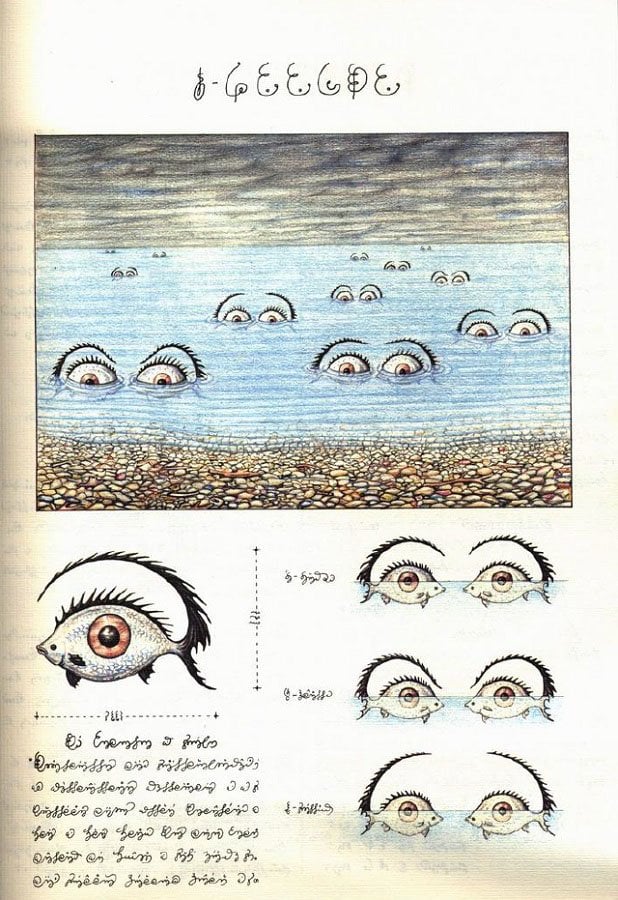 As with other encyclopedias, the pages of Codex Seraphinianus exhaustively detail the world’s various elements, except in this instance said world does not physically exist. Flora are shown as diagrams reminiscent of classical botanical illustrations. Fauna are playfully portrayed as otherworldly versions of animals we have on Earth. 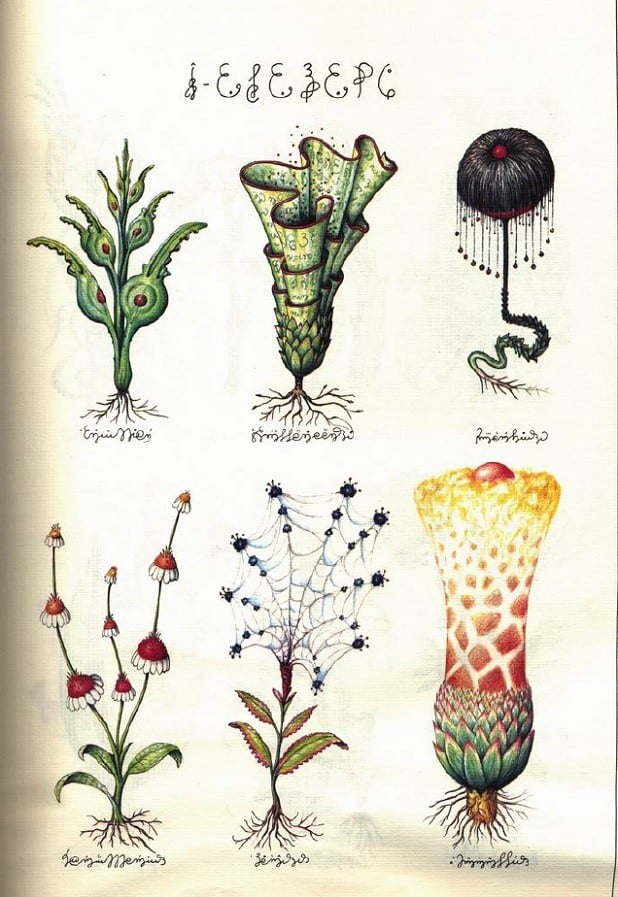 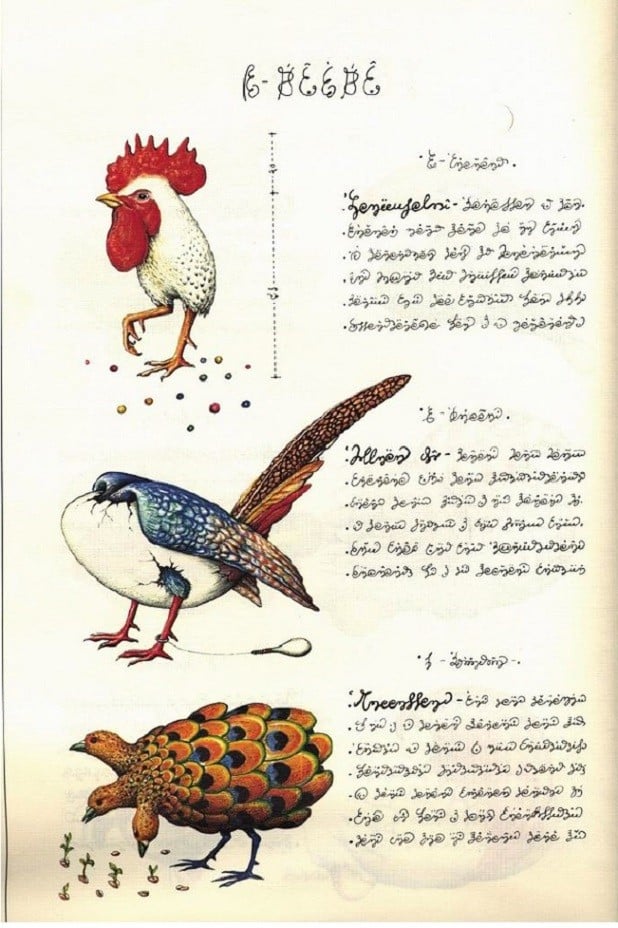 These depictions of wildlife are incredibly imaginative, often playing with shape – such as the hollow trees – or combining ordinary items like pen quills and fishbowls with fantastic creatures. 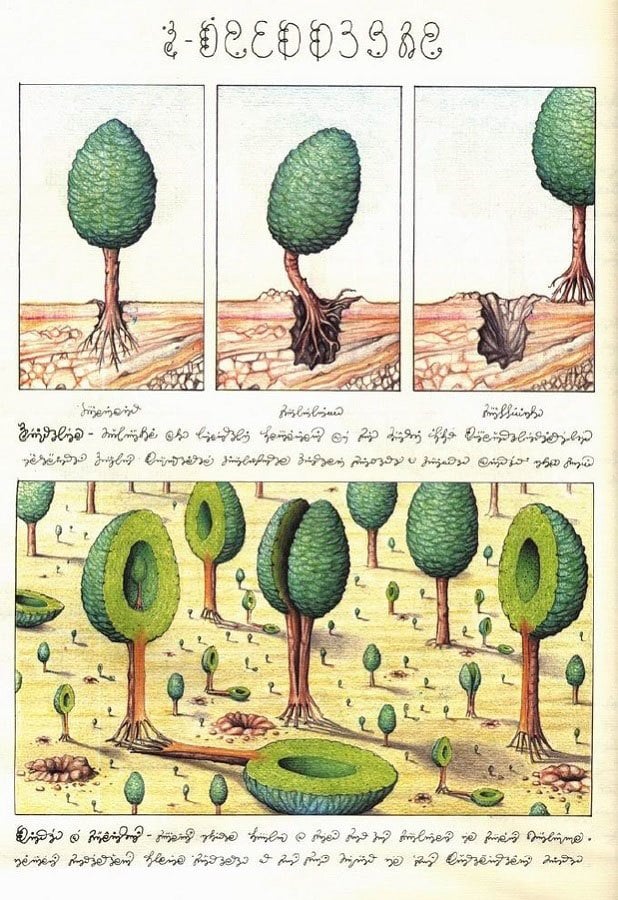 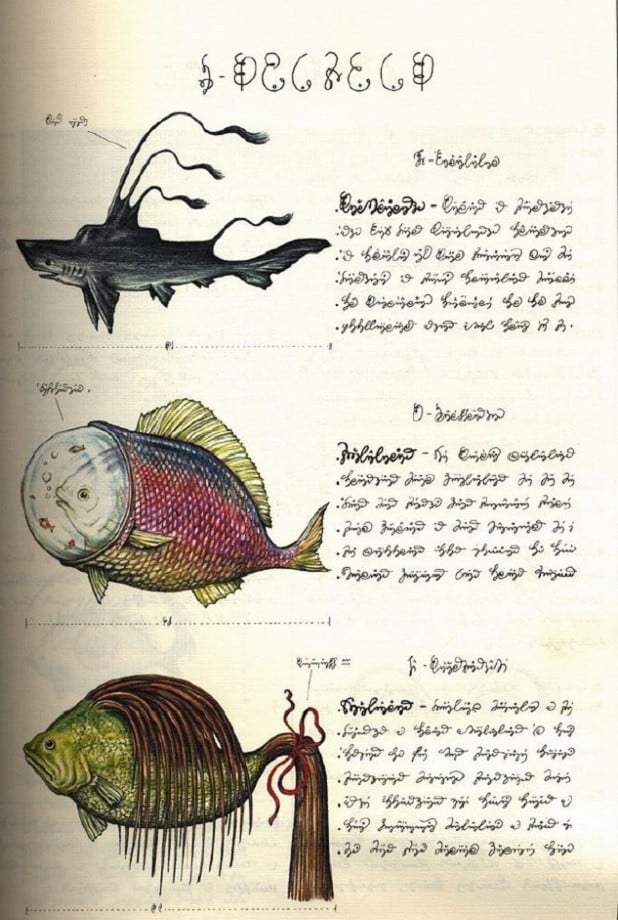 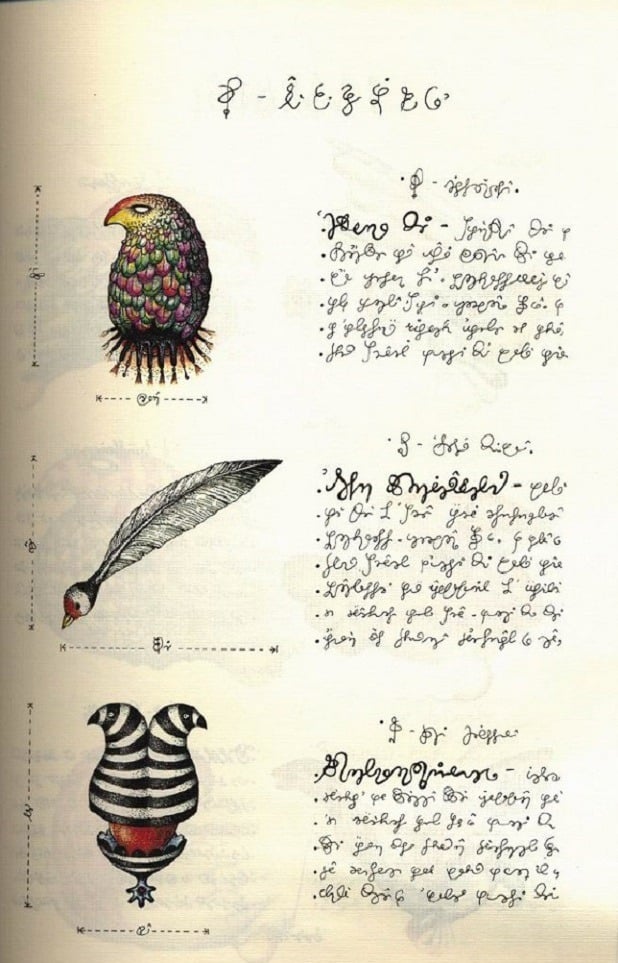 Of course, Luigi Serafini couldn’t very well leave out the people of this intriguing alien world. He shows us a number of colorful cultures, complete with traditional clothes, and the way they interact with their children. All illustrations in the encyclopedia whimsically blend the modern with the antiquated, which only contributes to its dreamy quality. 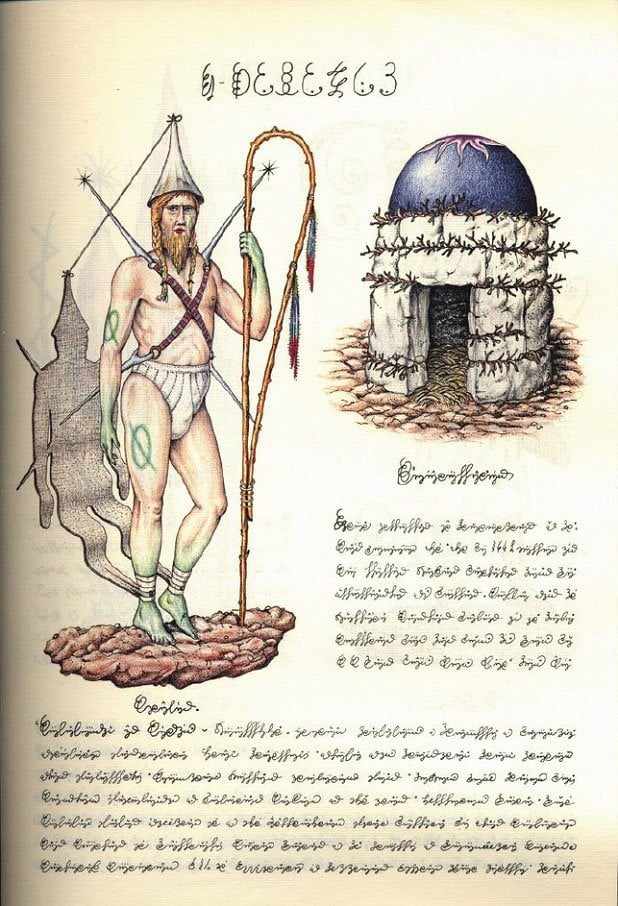 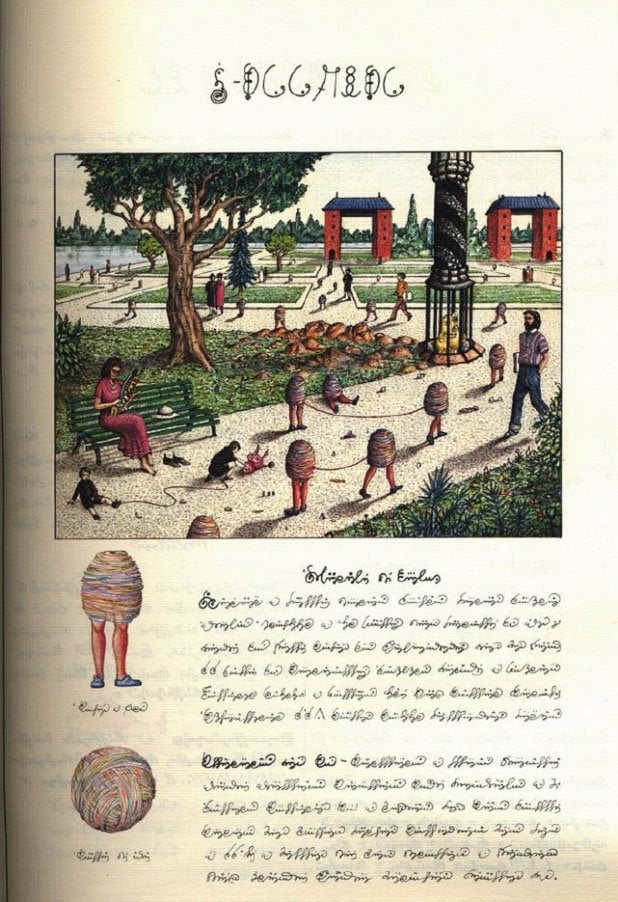 Serafini’s imagined cities are both rigorously architectural as well as romantic. He contrasts winding, maze-like city walls with what looks like an atmospheric canal. 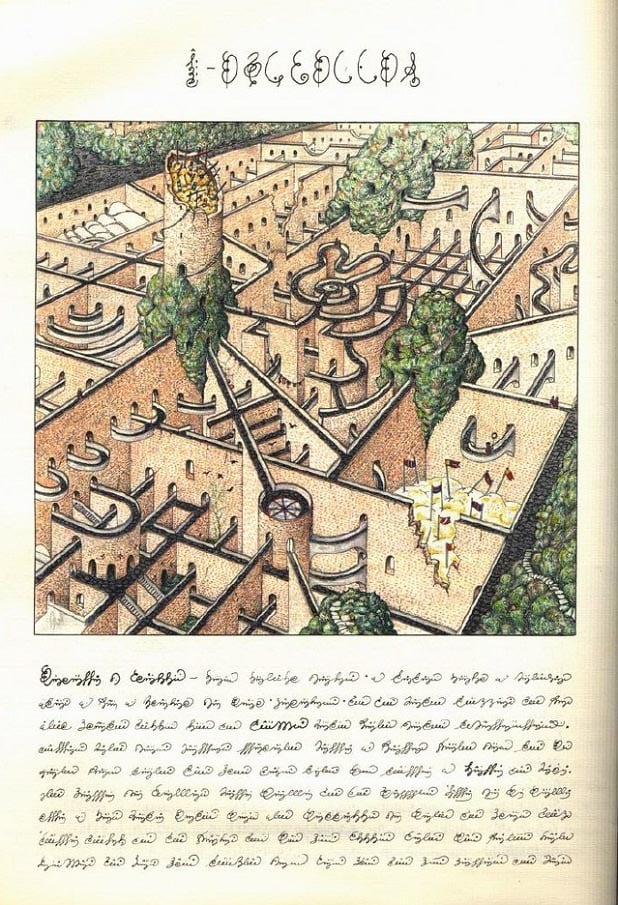 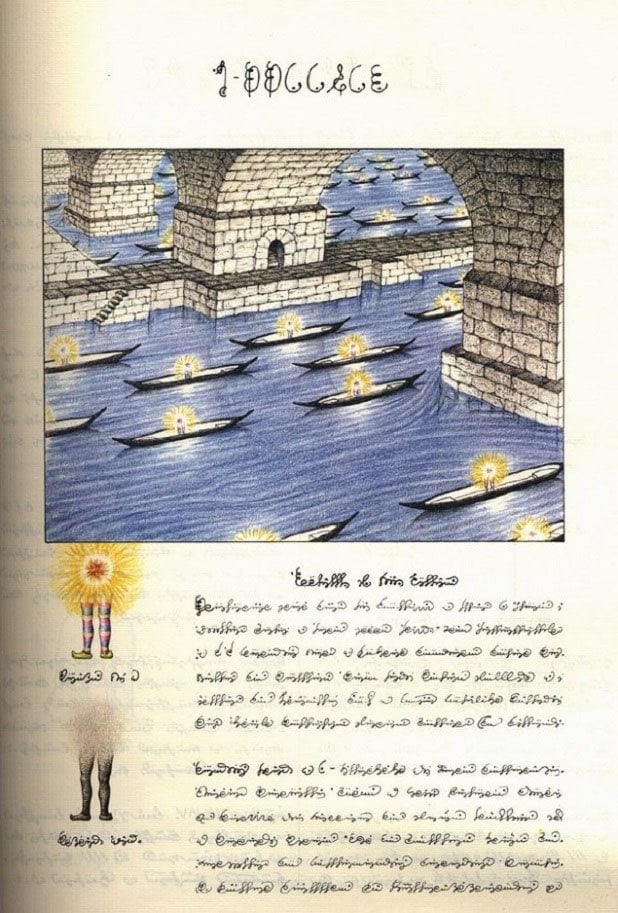 Codex Seraphinianus is so thorough that it even tackles the microscopic elements of the world. Several pages are devoted to what look like bacterial slides. Others present complicated tubes and flasks that might be used to distill chemicals. 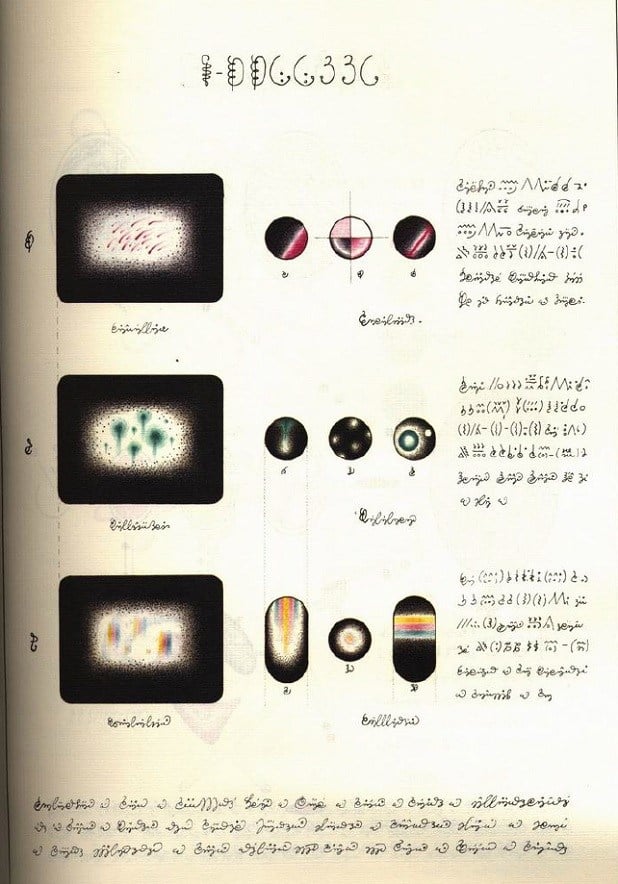 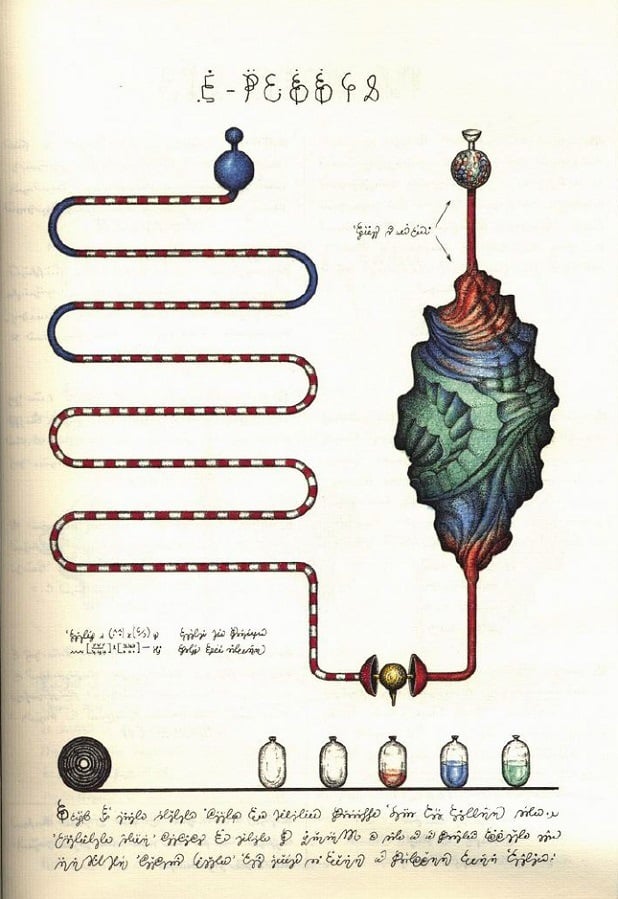 Perhaps inspired by his background as a designer, Serafini showcases the intriguing inventions of his imaginary people. One such scientific accomplishment is what appears to be a helicopter that creates rainbow patterns in the sky. Other gadgets are almost like Rube Goldberg machines, consisting of several parts for some unknown purpose. 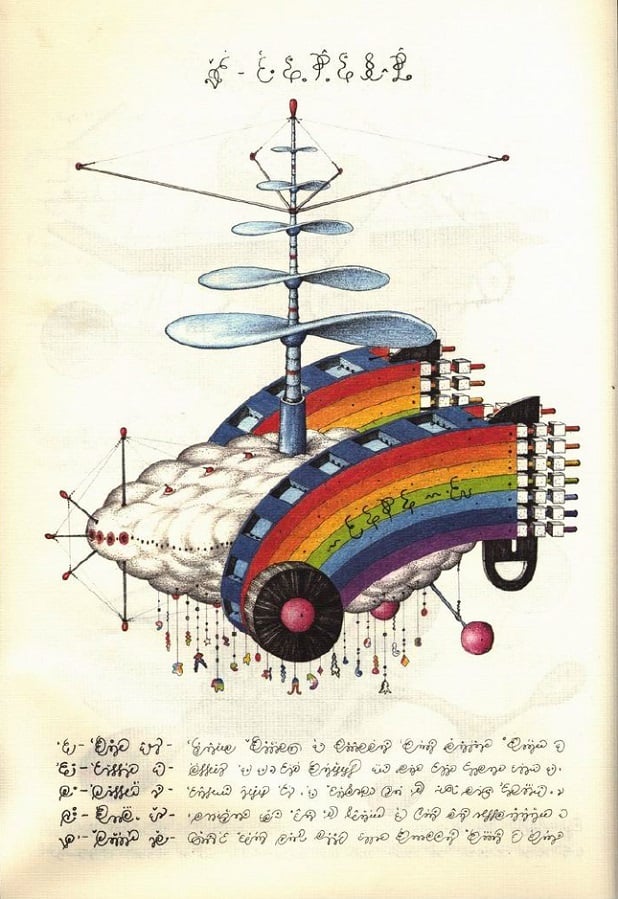 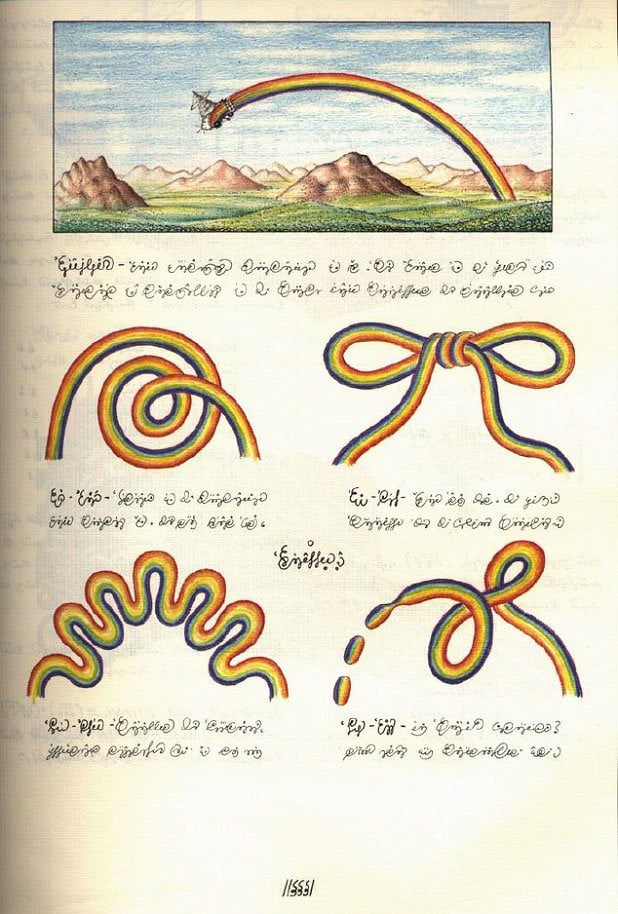 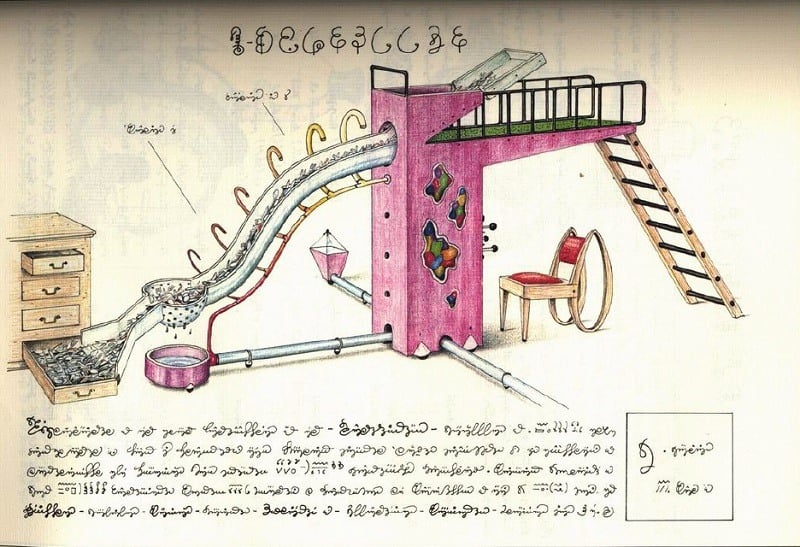 The illustrations are whimsical and at times nightmarish. There’s a healthy dose of Boschian body horror. 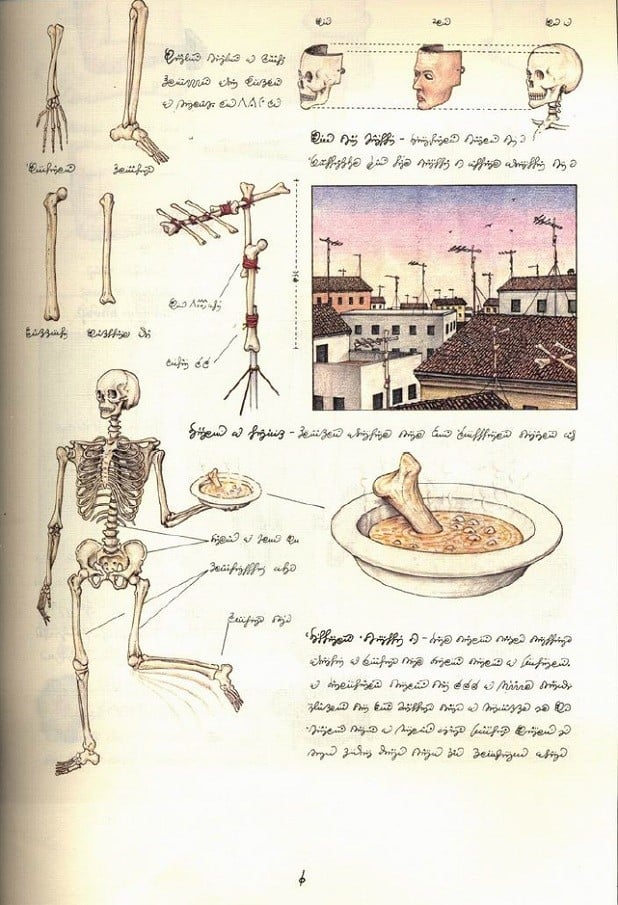 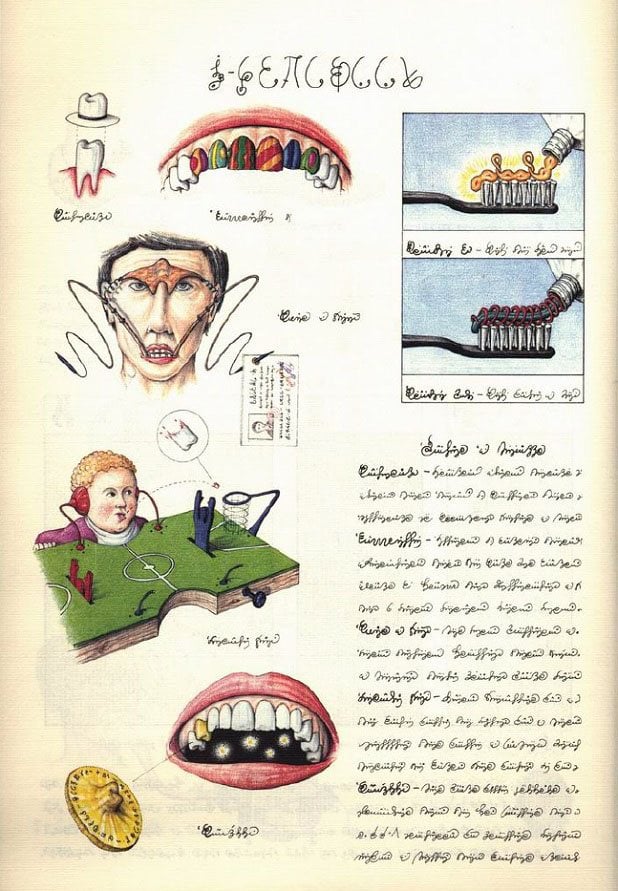 Depictions of food are also, by turns, creative and unsettling. Readers are made aware that some societies eat fish from faucets; also featured are toothed bowls that grind food into a paste, which is then eaten with a straw. 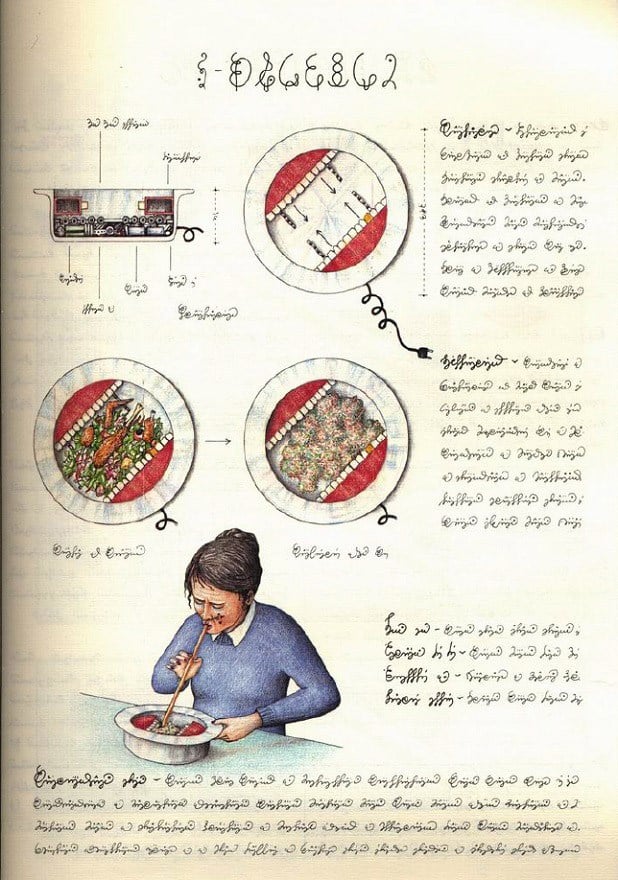 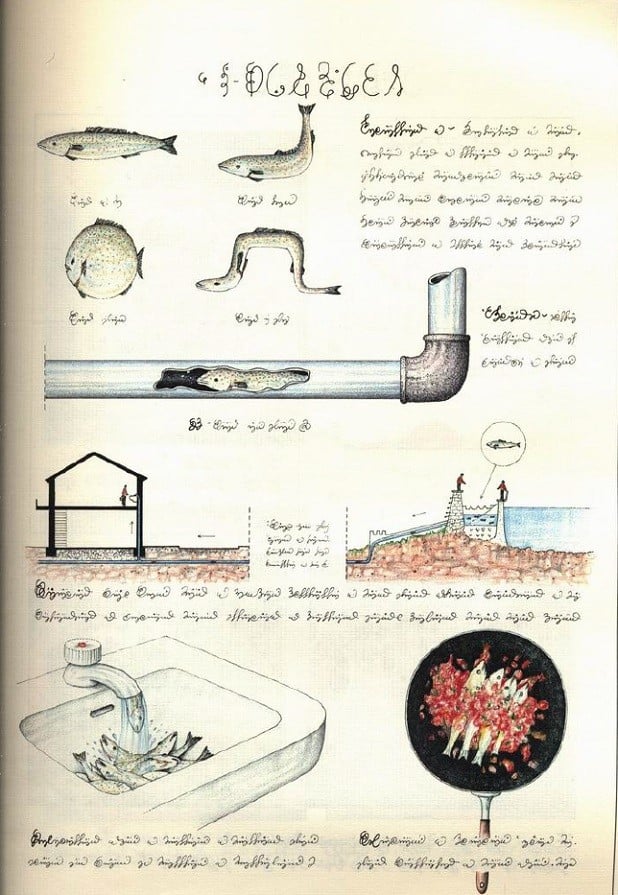 Accompanying the drawings are explanations written in an invented language, somewhat reminiscent of Sanskrit: elegant, flowing, and adorned with loops and curlicues. 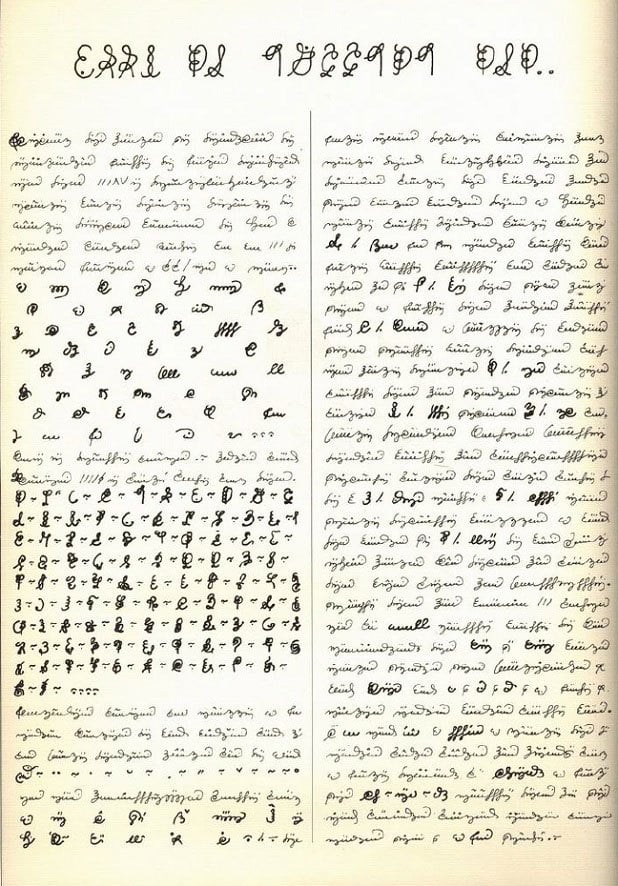 Serafini has said that the language is not meant to be understood, but still it’s captivated the imaginations of cryptographers and fans everywhere. In part, that was the point: Serafini wanted readers to experience the wonder and confusion that children feel before they’ve learned written language. The result is what seems like mysterious artifacts from another place and time. 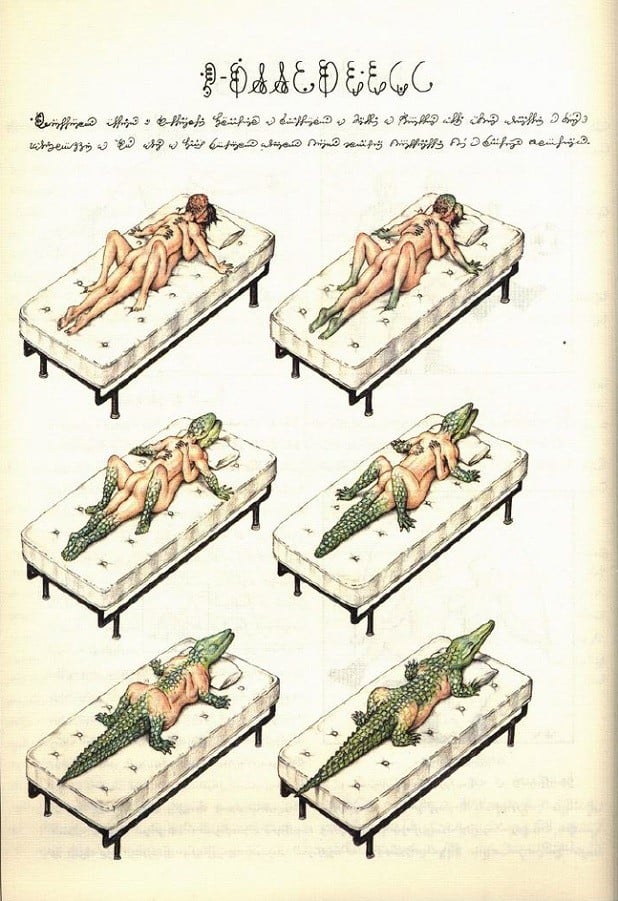 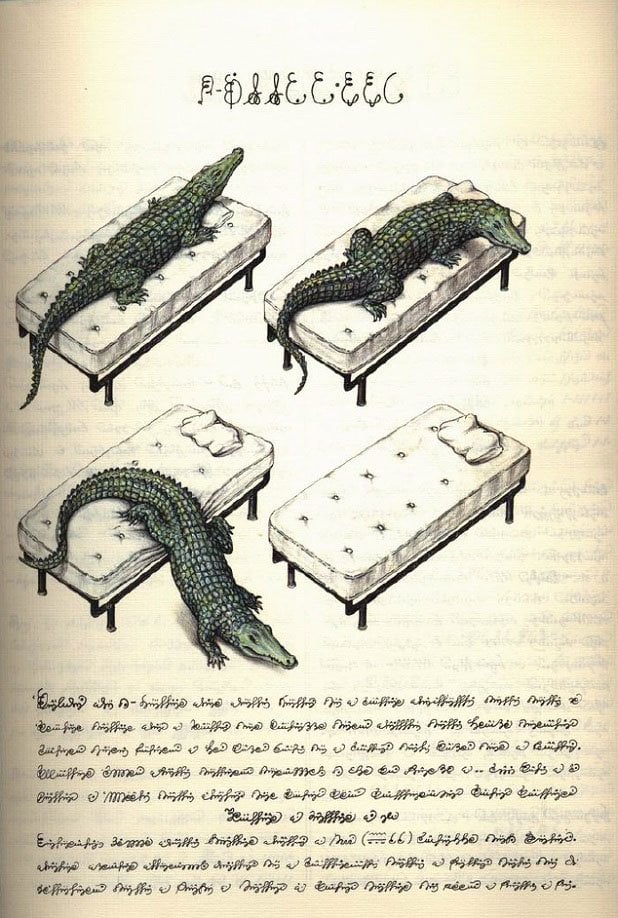 Not discounting the charm of a good mystery, part of Codex Seraphinianus’s lasting appeal is the way it blends the surreal with the mundane. Most of the art has a dream-like quality, mixing commonplace objects with impossible anatomy and vibrant colors.

One of the plants pictured grows into an ordinary chair, while another illustrates what appears to be a run-of-the-mill street lamp spouting forth a glowing cloud. Another shows bright-colored clothing, some of which looks more like huge flowers. 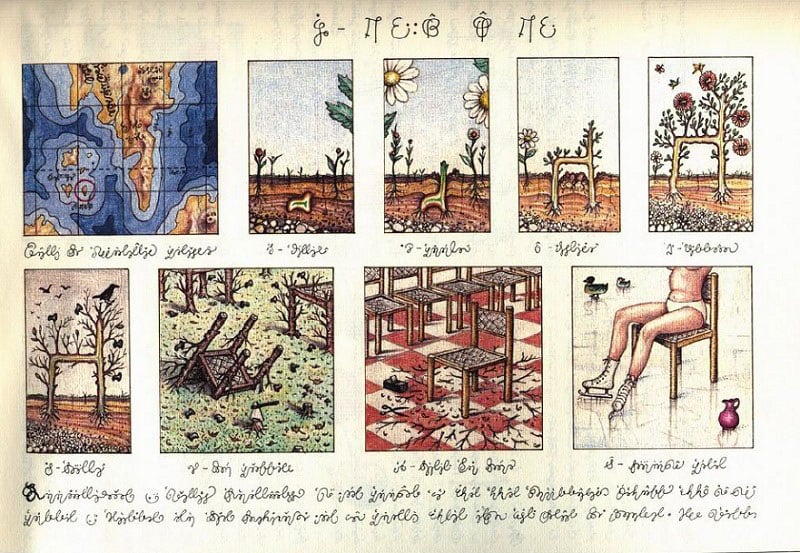 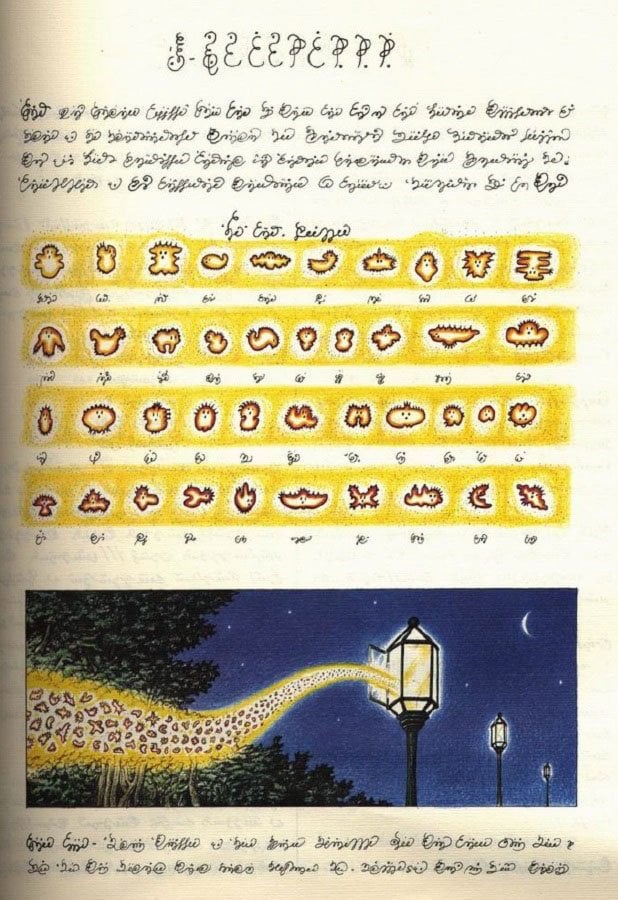 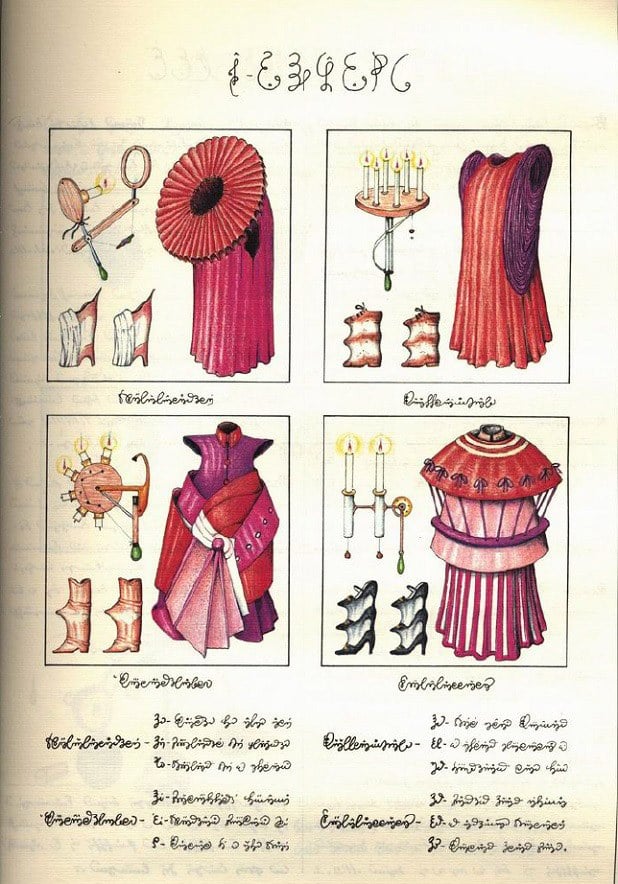 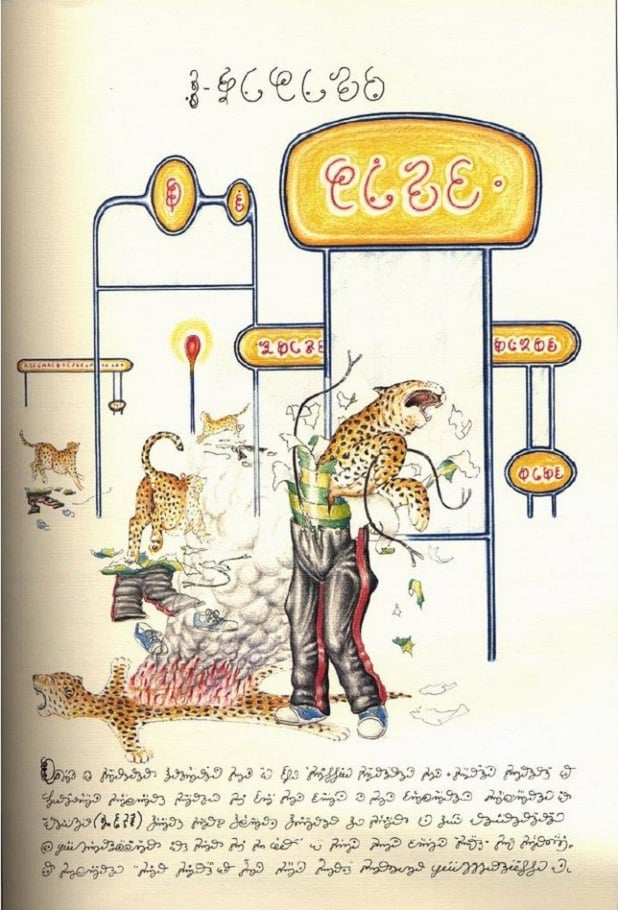 “Mythological” might be a good word to describe Serafini’s work. At roughly 360 pages long, it takes readers on a whirlwind tour of an alien world full of wonders and storybook scenes. 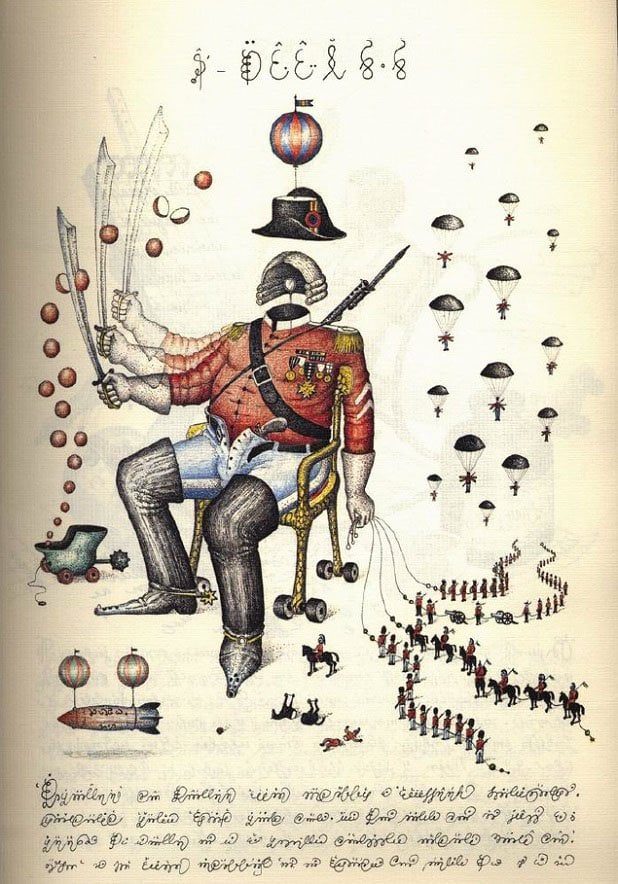 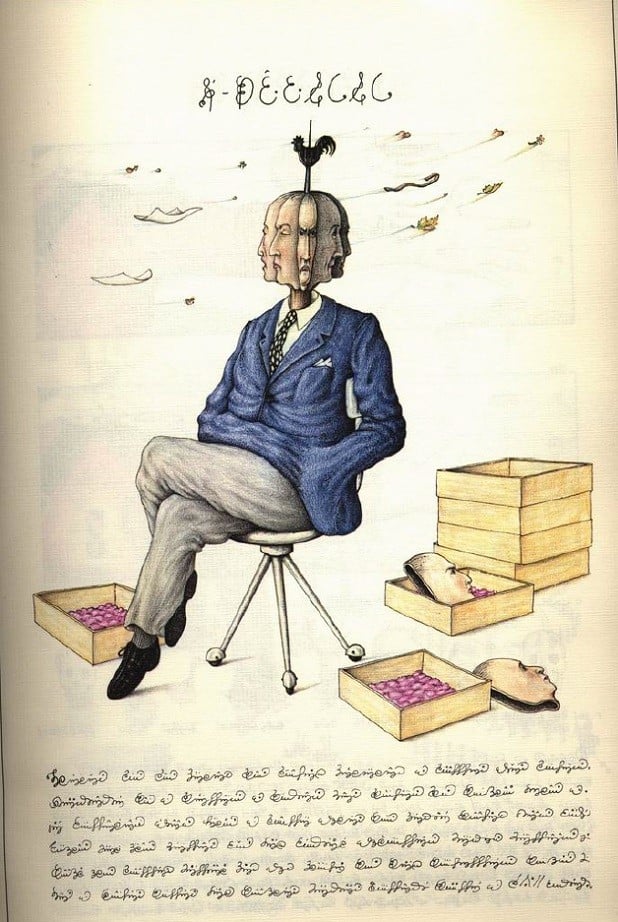 Codex ends with an afterword – written, of course, in the same undecipherable language. 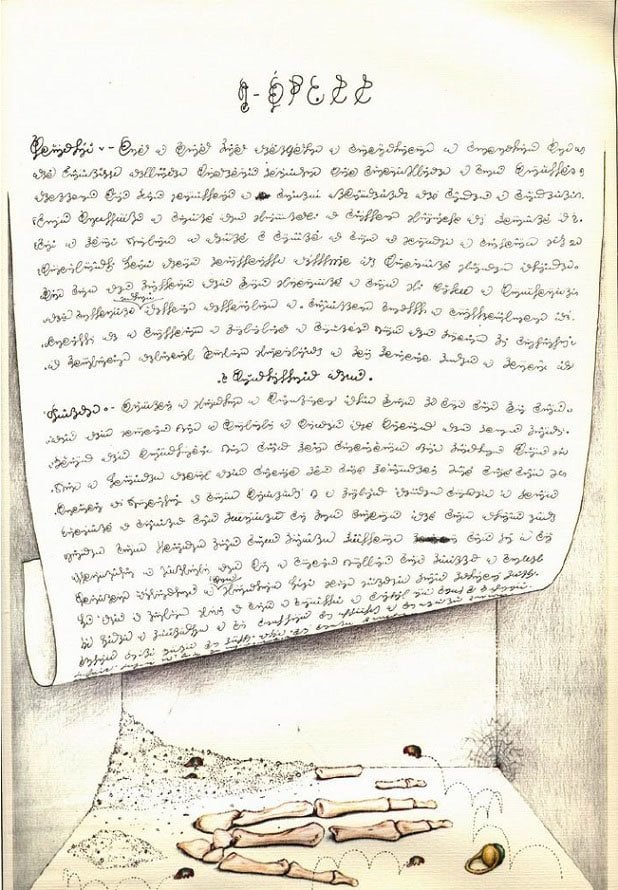 Strangely enough, Serafini described the process of creating the encyclopedia as, at times, an out-of-body experience.

He compared it to “automatic writing,” which is writing that is supposedly from either an external source (commonly said to be ghosts or spirits) or from the deep-seated unconsciousness of the writer. Given how bizarre and incredible some of the illustrations are, it wouldn’t be a stretch to believe it!

Many different editions of Codex Seraphinianus have made it to print, and as a testament to its popularity, Serafini released several signed, limited edition copies this year. Codex Seraphinianus has inspired everyone from academics to choreographers to fiction writers, the most famous of which is Italo Calvino.

Even today, enthusiasts still attempt to decode the mysterious handwriting while cultural commentators discuss its meaning. Like some kind of cultural Rorschach test, Codex can represent everything from the subconscious fear of the unknown to the chaos and clutter of the Information Age.

Even if readers can’t make heads nor tails of the words or even some of the pictures of the Codex Seraphinianus, there is one thing that is universally understood: the allure of the weird and unexplored.