Experts estimate that the sword dates back to the Third Crusade when Christian crusaders attempted to retake Jerusalem. 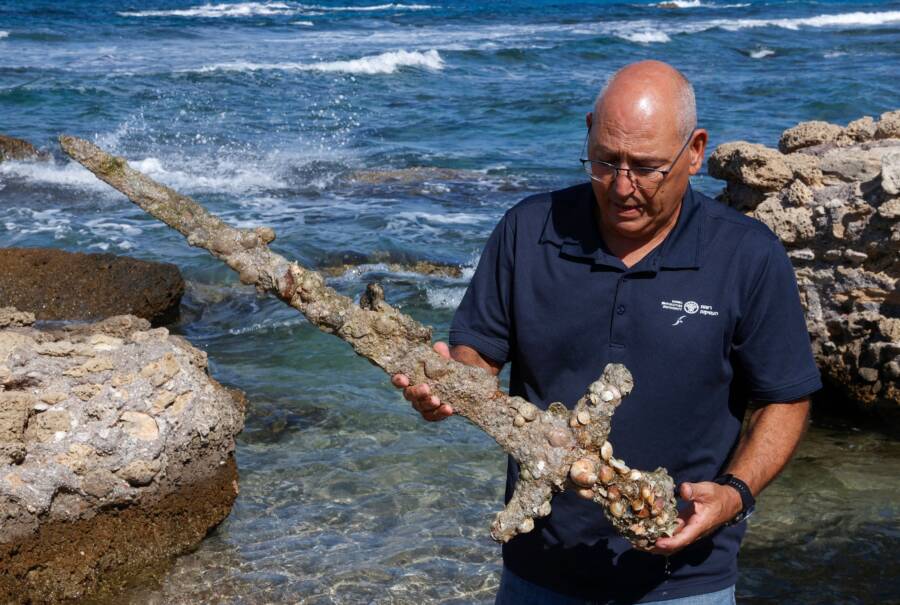 JACK GUEZ/AFP via Getty ImagesJacob Sharvit of the Israel Antiquities Authority holds the sword discovered by a local diver.

Shlomi Katzin dove into the waters off the Carmel coast of Israel with a Go-Pro and a sense of adventure. He emerged with a remarkably intact four-foot-long sword — which experts say dates back to the Crusades.

“It’s normal to find swords in bad condition, but this one was found under the water — and under the water, it was preserved in very good condition,” raved Jacob Sharvit, the director of the marine archaeology unit at the Israel Antiquities Authority (IAA).

“It’s the first time that we found a beautiful sword like this.”

Katzin swam about 500 feet from shore, and dove to a depth of around 16 feet. Along the seabed, the diver saw stone anchors, pottery fragments — and the sword. Worried that someone might come along and take it — or that the shifting sands might bury it — Katzin grabbed the shell-encrusted weapon and dragged it to the surface.

Then, as required by Israeli law, he turned it over to the IAA. 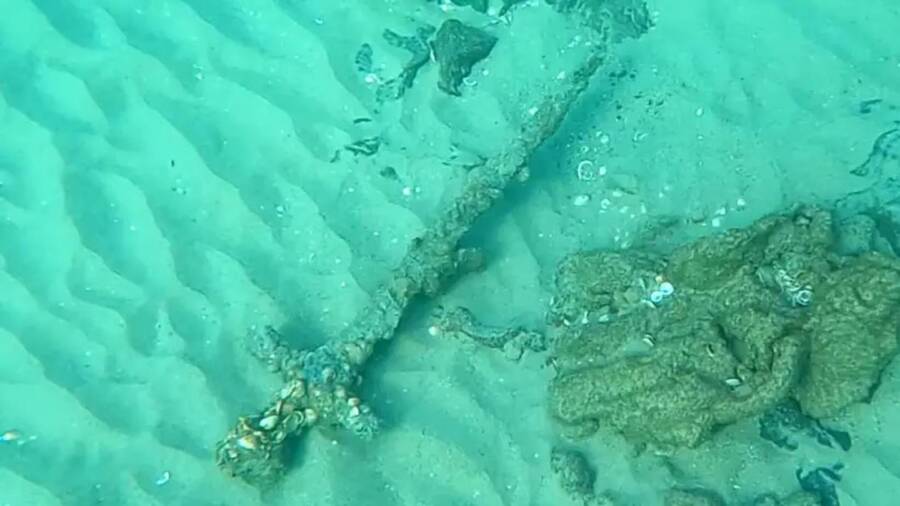 Experts with the IAA then examined the sword, which they deemed in good condition, possibly due to the warm waters of the Mediterranean Sea. They believe that the weapon is around 900 years old, and was likely used during the Crusades.

“It was found encrusted with marine organisms, but is apparently made of iron,” explained Nir Distelfeld, an IAA official.

Calling the discovery “beautiful and rare,” Distelfeld added: “It is exciting to encounter such a personal object, taking you 900 years back in time to a different era, with knights, armor, and swords.”

Nine hundred years ago, the Crusades were in full swing in the Middle East. The conflict, which lasted from 1096 to 1291, was a series of eight attempts by Christian warriors to conquer the “Holy Lands.”

Experts believe that this sword dates from the Third Crusade, which lasted from 1187 to 1192. Then, forces led by King Philip Augustus of France, King Richard I of England (Richard the Lionheart), and the Holy Roman emperor, Frederick I (Frederick Barbarossa), set out to retake Jerusalem, after losing the territory to the Muslim leader Saladin.

But because only Christian forces came from the sea, experts suspect that the sword once belonged to a Christian crusader, and not a Muslim defender.

“[Muslims] destroyed the coastal cities so the Crusaders couldn’t return and reconquer the Holy Land,” Sharvit said, noting that further investigation is needed to definitively answer who wielded the sword. Whoever had the sword likely dropped it during a fight at sea, or perhaps fell into the water himself.

Regardless of who once held the sword — and how he lost it — researchers believe that the swordsman himself had to have been incredibly strong.

“It’s heavy because of the stones that are glued to it and also because it’s [an] iron sword and very big,” explained Sharvit. “That means that the guy that held this sword and [fought] with it was very strong. I’m trying to imagine him on the field with all the armor on him and the sword and fighting with it.

“He should really be in good fitness, maybe they were bigger than us today but definitely stronger. And it’s amazing.” 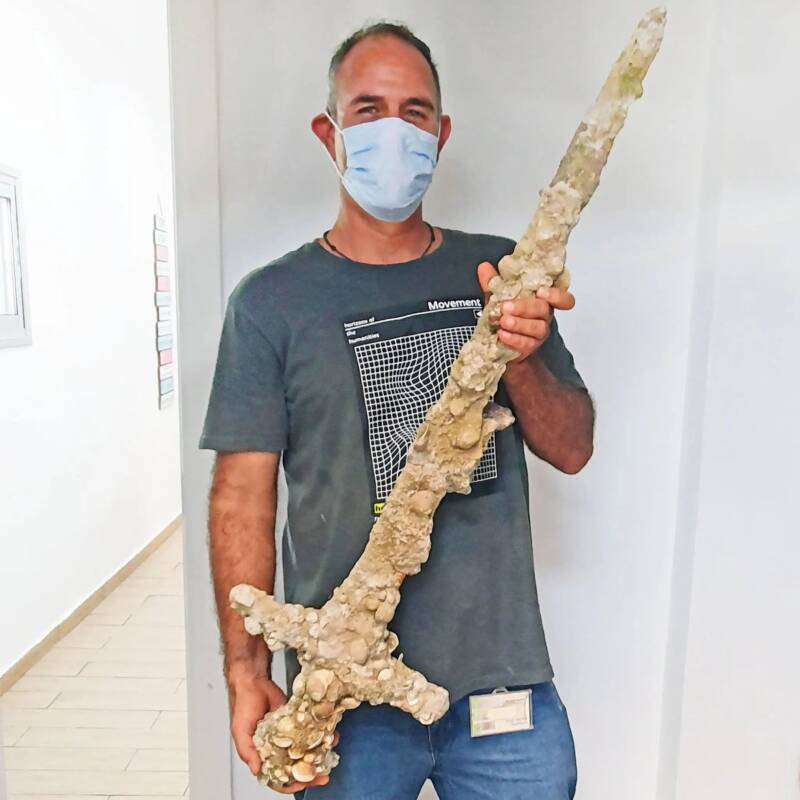 Nir Disteleld/Israel Antiquities AuthorityShlomi Katzin with the sword he found in the water.

For now, the goal of the IAA will be two-fold. They’ll continue to study and clean up the sword, with the goal of placing it in a museum. And they’ll study the area where Katzin found it.

The organization has been aware of artifacts in that area since June but hasn’t yet explored it in full. They suspect that the Carmel coast once acted as a shelter for ships, which subsequently left artifacts in their wake. So far, the IAA has come across a number of items, some dating back 4,000 years.

Though Sharvit sees the sword as an especially exciting find, it’s yet to be seen what else shifting sands off the coast may reveal.

After reading about the 900-year-old sword discovered by an Israeli diver, learn about the 3,200-year-old sword found in Mallorca. Or, discover the story of the girl who found a sword in the lake where King Arthur’s Excaliber was allegedly thrown.