The Oldest Known Depiction Of A Ghost Was Just Found On 3,500-Year-Old Babylonian Tablet

Discovered in the British Museum in London, the ancient tablet shows a lonely male spirit being taken to the afterlife by a female companion. 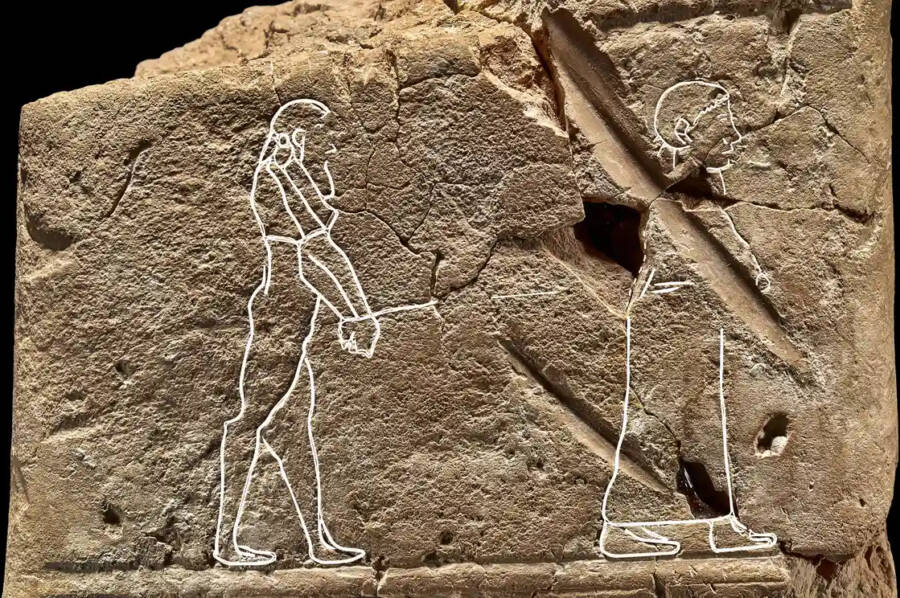 It’s only appropriate for the Halloween season that researchers have officially discovered the oldest known depiction of a ghost. Spotted on a 3,500-year-old Babylonian tablet stored in the British Museum since the 1800s, the illustration had been overlooked until now.

The faded drawing can only be seen from above and under a light, which is why it went un-discovered for so long. Fortunately, the required viewing angle for these faded outlines was caught by Dr. Irving Finkel, curator of the museum’s Middle Eastern department. He also managed to properly translate the cuneiform inscription for the very first time — and identified it as an exorcist’s guide to peacefully banish lonely spirits to the afterlife.

When viewed correctly, the drawing shows a lonely male ghost with bound hands being led to the underworld by a female lover — with a cuneiform inscription on the back detailing a ritual for ushering the poor soul into the beyond.

“You’d probably never give it a second thought because the area where the drawings are looks like it’s got no writing,” said Finkel. “But when you examine it and hold it under a lamp, those figures leap out at you across time in the most startling way.” 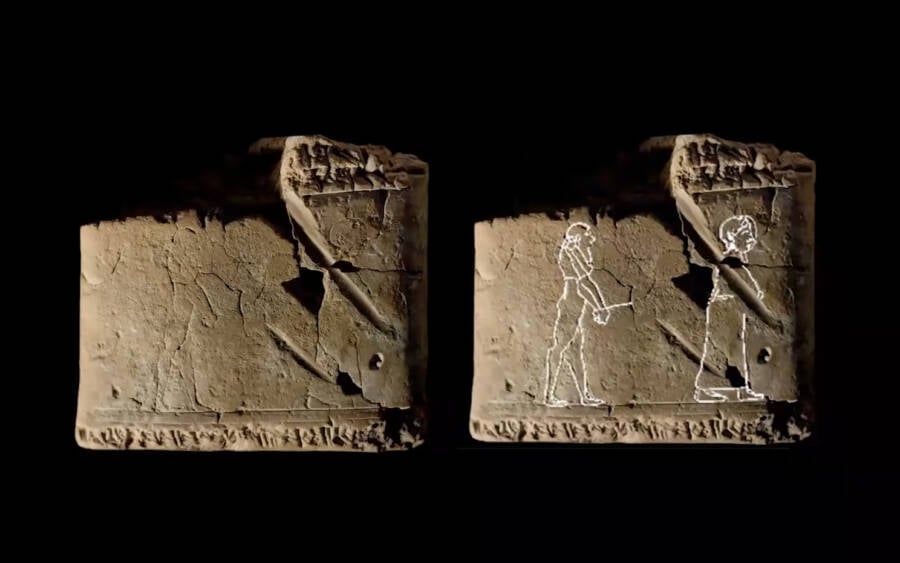 Archaeology Now/YouTubeThe outlines have thoroughly faded over time and are only visible from a particular angle and under a light.

“It’s obviously a male ghost and he’s miserable,” said Finkel of the depiction. “You can imagine a tall, thin, bearded ghost hanging about the house did get on people’s nerves. The final analysis was that what this ghost needed was a lover.”

While the depiction was rather simple to interpret, the inscription itself was far more mysterious once translated. According to Ancient Origins, it provided ritualistic instructions on how to bring melancholy spirits in the world of the living back to their appropriate plane. The proposed ritual is rather complex, and involves making one male and one female figurine.

“You dress the man in an everyday shift and equip him with travel provisions,” it says. “You wrap the woman in four red garments and clothe her in a purple cloth. You give her a golden brooch. You equip her fully with bed, chair, mat and towel; you give her a comb and a flask.” 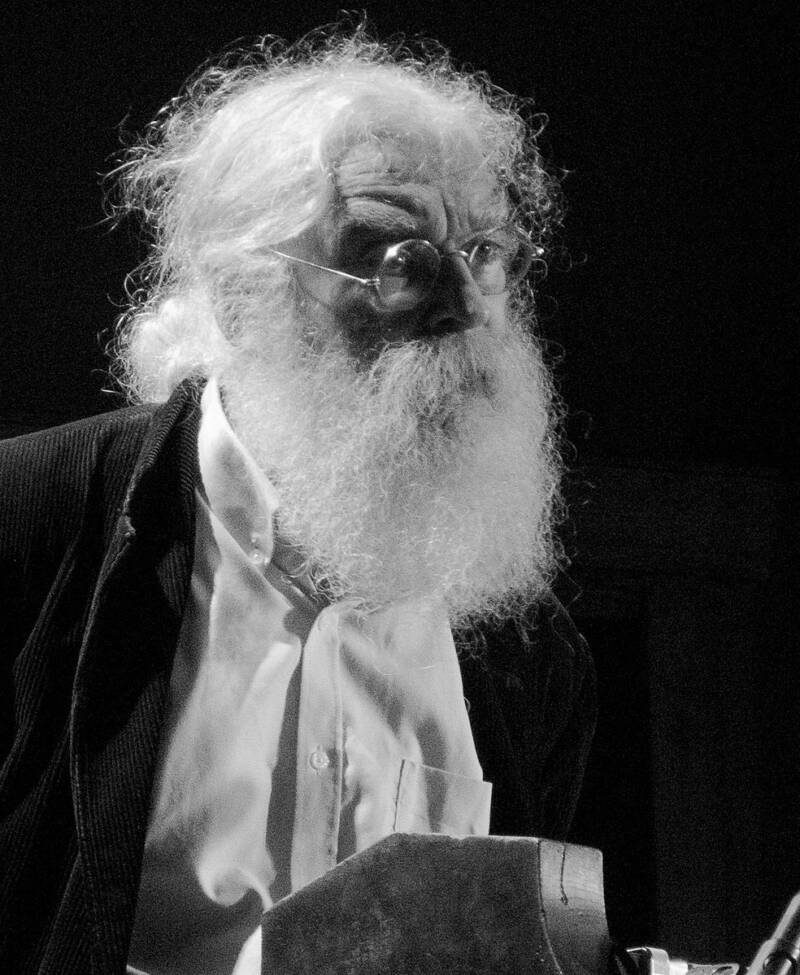 Wikimedia CommonsDr. Irving Finkel is a leading authority on cuneiform and the British Museum’s curator of the Middle Eastern department.

“At sunrise towards the sun you make the ritual arrangements and set up two carnelian vessels of beer. You set in place a special vessel and set up a juniper censer with juniper. You draw the curtain like that of the diviner. You [put] the figurines together with their equipment and place them in position…and say as follows, Shamash.”

Shamash served as the ancient Babylonian sun-god and judge of the underworld by night. Perhaps most ominously, the cuneiform text concluded with a dire warning: “Do not look behind you!” Finkel is convinced the tablet was once housed in a temple and part of a library of magic — or the personal item of an exorcist.

It’s important to note the tablet was created during the second period of Babylonian development. A thriving state in Mesopotamia, Babylon’s first notable growth period occurred between 2300 and 1712 B.C., thriving under the rule of Hammurabi between 1792 and 1750 B.C. The second occurred between 626 and 539 B.C. 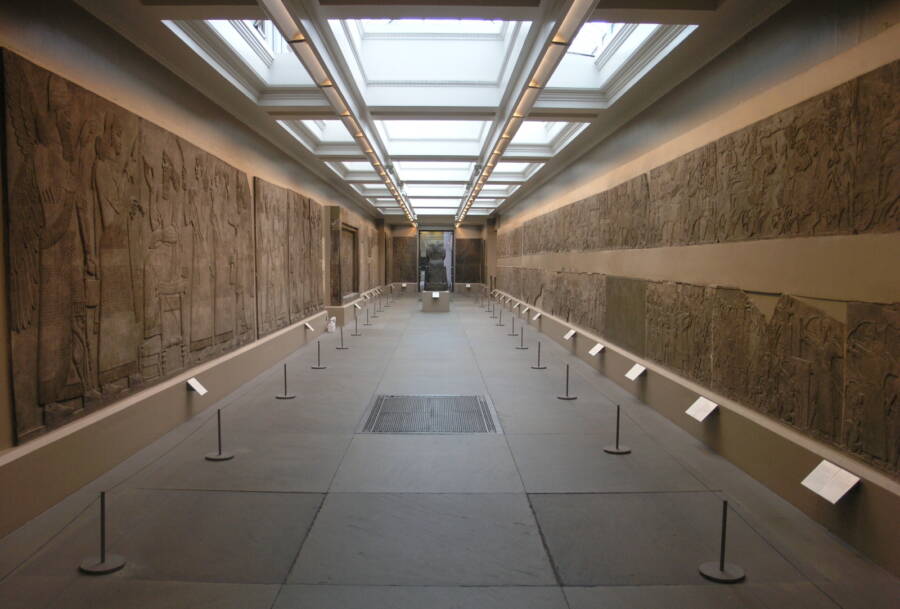 Wikimedia CommonsMiddle Eastern reliefs in the British Museum, in whose vaults the tablet had been gathering dust since the 1800s.

“You can’t help but imagine what happened before,” pondered Finkel. “‘Oh God, Uncle Henry’s back.’ Maybe Uncle Henry lost three wives. Something that everybody knew was that the way to get rid of the old bugger was to marry him off. It’s not fanciful to read this into it. It’s a kind of explicit message.”

“There’s very high-quality writing there and immaculate draughtsmanship. That somebody thinks they can get rid of a ghost by giving them a bedfellow is quite comic.”

While Finkel himself has never seen a ghost, he believes the more isolated vaults of the British museum are full of them and claimed several people have seen spirits lumbering around the King’s Library. However, he’s more interested in the tablet which he will chronicle in his book The First Ghosts: Most Ancient of Legacies.

Finkel hopes this latest discovery reinforces how many of our modern fears and superstitions are actually rooted in ancient times. He also said that Ancient Egypt has overshadowed much of Babylon’s history which is just as important. Ultimately, if he’s right about this particular deception — he just made history, himself.

“It is a Guinness Book Records object because how could anybody have a drawing of a ghost which was older?” Finkel said.

After reading about archaeologists finding the oldest known drawing of a ghost, learn about a 5,000-year-old Sumerian beer receipt showing history’s first known signature. Then, read about the disturbing “tsunami spirits” haunting Japan ever since its 2011 disaster.