Survivors of Japan's harrowing 2011 earthquake and tsunami that killed more than 15,000 people claim to keep seeing the restless spirits of the victims known as "tsunami ghosts."

On March 11, 2011, a devastating magnitude 9.1 earthquake rocked eastern Asia’s seafloor, sending a wave of ocean water the height of a 12-story building into Japan’s coast. More than 15,000 people lost their lives, millions lost access to running water or electricity, and more than 120,000 buildings were destroyed within a matter of minutes.

The Tōhoku earthquake, named for the region of northeastern Japan from which it originated, was the most devastating in the nation’s recorded history. 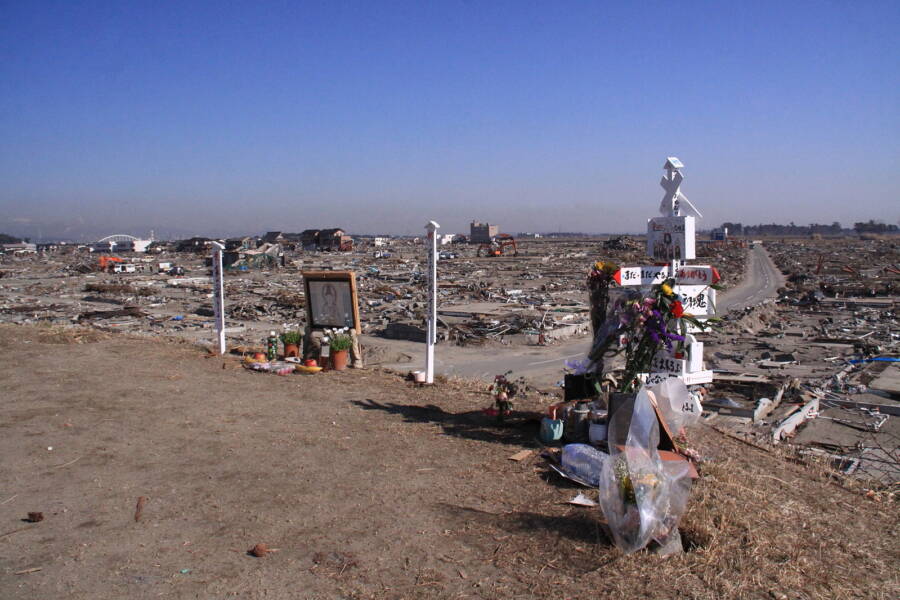 Wikimedia CommonsPrayer posts on Mount Hiyoriyama, the site where some have claimed to have witnessed ghostly tsunami spirits.

But shortly after the disaster, traumatized survivors began to see the faces of victims in puddles, wandering the beaches, and appearing at their doors.

Disquieting figures drenched in water were also seen hailing cabs, only to disappear once they climbed into the back seat. And these weren’t one-off sightings — residents all across the hardest-hit cities were reporting such apparitions.

British reporter Richard Lloyd Parry explored the widespread phenomenon of these “tsunami spirits” in his nonfiction book, Ghosts of the Tsunami, and the bizarre circumstance was most recently chronicled in an episode of Netflix’s Unsolved Mysteries. But explaining this eerie case has not been a simple task.

One must consider how Japanese culture, collective grief, and perhaps the truly uncanny, work together to create these tsunami spirits. One thing is clear, however, these tales are as hair-raising as they are dumbfounding. 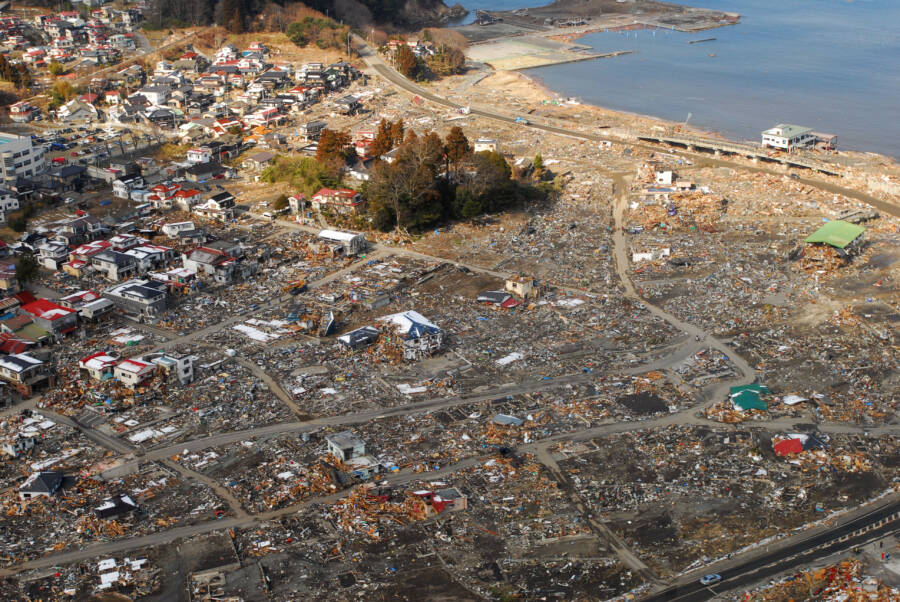 U.S. NavyThe town of Sukuiso a week after the tsunami hit.

It was 2:46 p.m. local time when the earthquake started. Centered 45 miles east of Tōhoku at a depth of 15 miles below the surface of the ocean, it shook the Earth for six full minutes, triggering 128-foot waves that crashed into Miyako city in northeastern Japan. Meanwhile, water traveled six miles inland in Sendai.

A total of 217 square miles were flooded, which included the destruction of hospitals, schools, businesses, homes, railways, and everything else. Perhaps most devastatingly, the tsunami also caused a cooling system failure at the Fukushima Daiichi Nuclear Power Plant, leading to an infamous meltdown.

CBS News footage of the tragic natural disaster in progress.

“In the 65 years after the end of World War II, this is the toughest and the most difficult crisis for Japan,” said then-Prime Minister Naoto Kan.

But as Japan forged ahead with its reconstruction, the disaster lingered in supernatural ways. 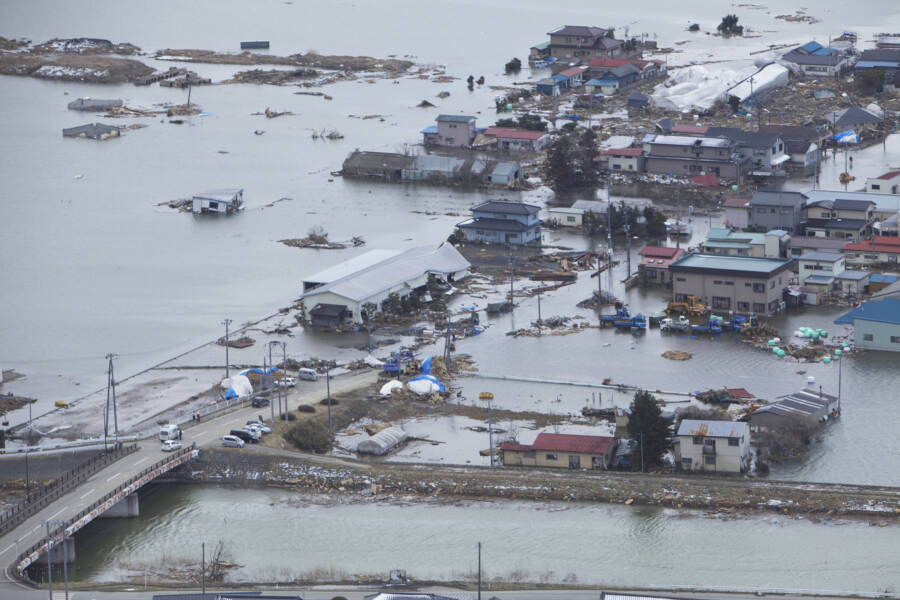 Richard Lloyd Parry had lived in Japan for 18 years by the time the natural disaster occurred, and he was surprised to learn that the nation was more superstitious than he thought. According to Parry, seeing a tsunami ghost in the months following the earthquake was not rare.

“People’s grief and loss and anguish came out,” he told NPR in 2014. “And what also came out after a few months were stories of ghosts and hauntings and supernatural events to the extent that it almost seemed like an epidemic.”

In 2016, a graduate student of sociology named Yuka Kudo traveled to one of the cities most ravaged by the disaster, Ishinomaki, in order to study this epidemic. She focused specifically on the town’s cab drivers, who claimed to have picked up passengers that turned out to be tsunami ghosts.

Ishinomaki suffered 3,097 deaths and reported 2,770 missing persons. A whopping 50,000 buildings had been destroyed there as well. The decimated city saw most of its population relocate, with aimless cab drivers hoping for the best on their shifts. Out of the 100 cabbies Kudo prodded for supernatural stories, seven volunteered.

The first cabbie told Kudo of an encounter he had in the summer of 2011. It had only been a few months since the tsunami, and there were barely any customers. He was naturally shocked to suddenly spot a young woman hailing him down in a particularly hard-hit area. 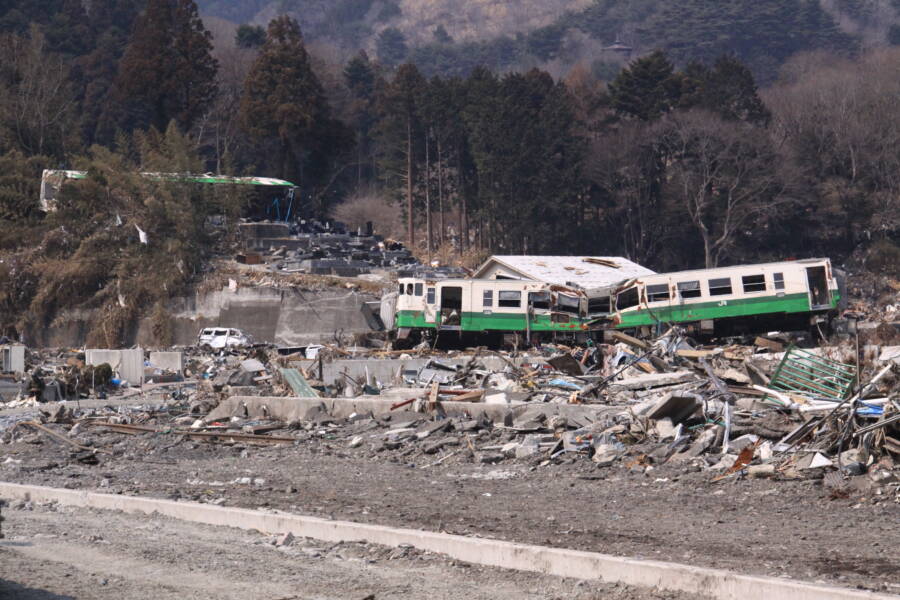 Wikimedia CommonsA train that was was carried 200 meters from the tracks in Ishinomaki.

Wearing a heavy winter coat in the middle of summer, the figure was also completely drenched. The driver barely had time to realize that it hadn’t rained in days before she climbed into the back seat and asked to be driven to the largely-abandoned Minamihama district.

“That area is almost empty,” he said while switching on the meter. “Are you sure?” There was a long silence. Then, in a shivering voice, the woman asked: “Have I died?”

The terrified driver turned around to face the customer, but found absolutely nothing nor anyone in his car. 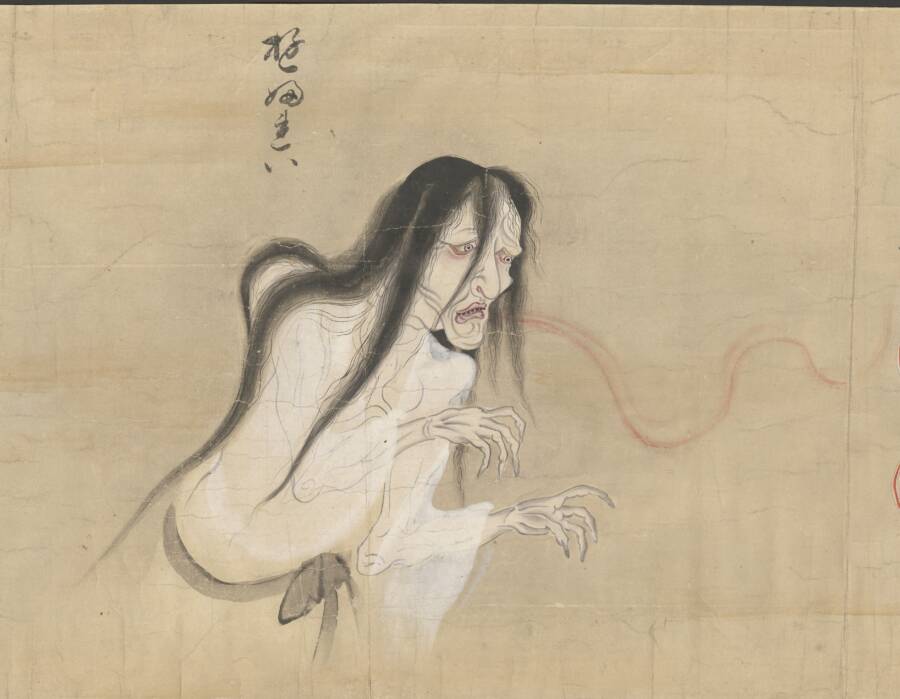 Another cabbie told Kudo that he picked up a confused-looking man in his 20s who kept pointing forward when asked where he needed to go. Finally, he said simply, “Hiyoriyama,” a mountain park near the city. After careening up the mountain near Ishinomaki, the driver dropped his customer on a plateau at the summit. But when he turned around to be paid, there was nobody in his car.

Parry’s investigative book also documents how one man in Kurihara said that he now despises the rain, as he constantly sees the eyes of tsunami victims he knew in the puddles.

The ghost of an old woman is said to haunt a refugee home in Onagawa and to have regularly sat down for a cup of tea there. The cushion that would be left out for her was purportedly soaked in seawater every time her visits were over.

And in Tagajō, one fire station received incessant calls until the firefighters drove to the caller’s ruins to pray for the dead. Then, the calls stopped completely. 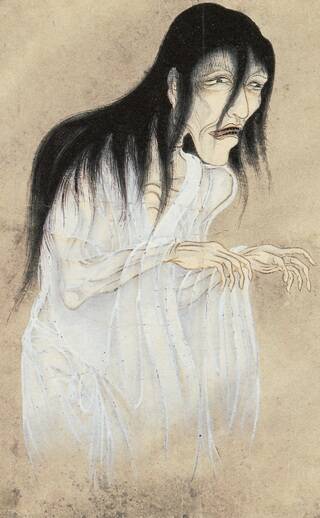 But there were more profound incidences with tsunami ghosts than these. Parry also spoke with Buddhist priest Reverend Taio Kaneda, who told him about a man named Takashi Ono who had become possessed. Kaneda and Ono both lived miles from the coastline, where the worst of the disaster had occurred. While Kaneda helped countless people properly bury their loved ones, Ono stayed away from the disaster zone until he finally went on his own to face it months later.

After seeing the monumental loss and devastation along the beaches, he returned home and had dinner with his family. Afterwards, he went into the backyard and started rolling in the mud, speaking in a guttural, aggressive way. His family was mortified. The next day, he had no recollection of what he had done.

Locals share their encounters with tsunami spirits following the disaster.

While there are no clear-cut answers to these incidents, perhaps a closer look at the history of Japan’s relationship with the spirit realm can provide some insight into these tsunami ghosts.

Could Tsunami Spirits Be A Manifestation Of Grief?

Japan has had a longstanding cultural relationship with ghosts, or yūrei. In the Shinto religion, which means literally “the way of the gods” and is the indigenous faith of the Japanese people, spirits inhabit all things animate and inanimate. Many Japanese came to believe that because the tsunami took people before they were ready to die, their restless spirit still wanders the plane of reality. 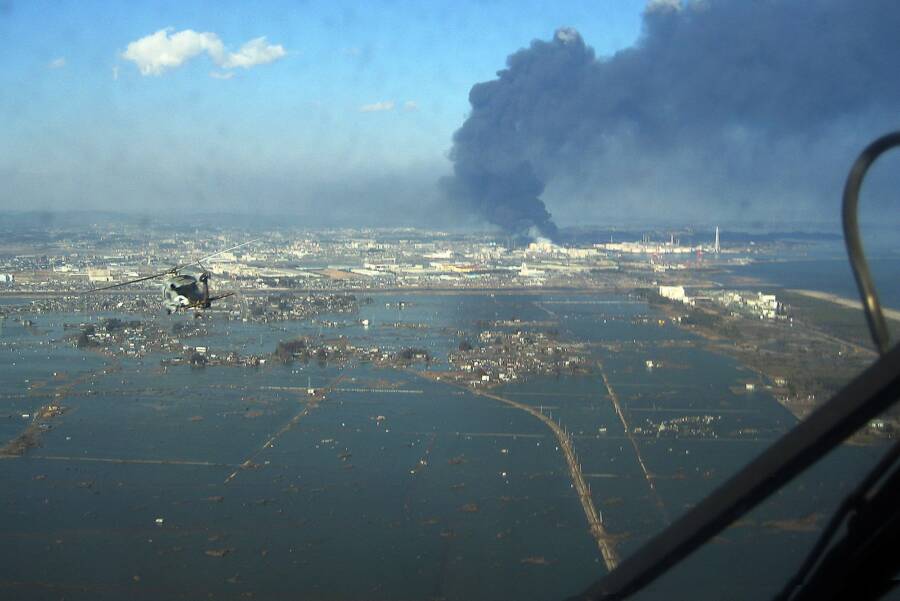 And despite global polls suggesting that Japan is one of the least religious nations on the planet, Parry has come to learn otherwise.

“I hadn’t realized how real and alive the cult of the ancestors and the cult of the dead is,” Parry reported. “The other thing I learned is something I should have known anyway, but that grief and trauma express themselves often very indirectly.”

Parry believes that Ono is one such example of this. Even though Kaneda performed an exorcism on him, as well as many others who believed they were possessed by tsunami spirits, Parry is unconvinced that the supernatural is really behind this phenomenon. But he did agree with Kaneda on the principle that these spirits are real to whomever believes to have seen them, and in that context, should be taken seriously. 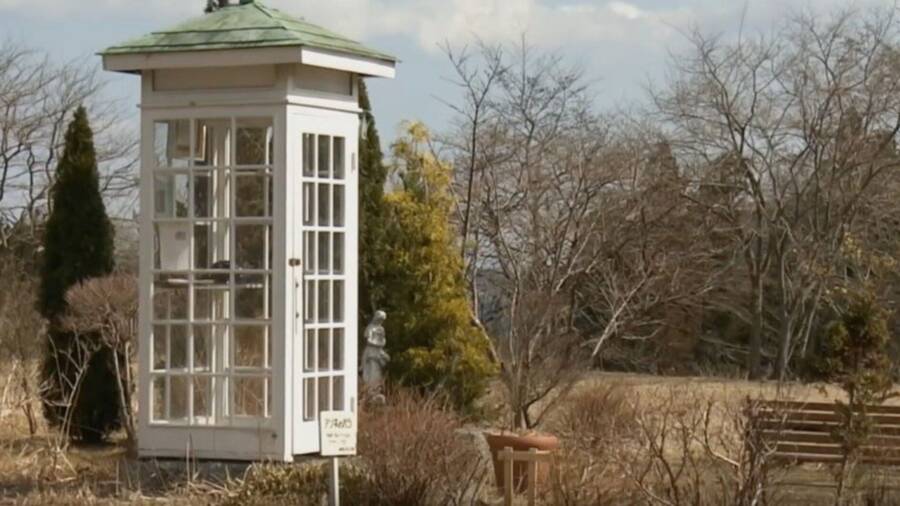 YouTubeThe “phone of the wind” in Otsuchi, which allows those in mourning to express their grief into the ether.

“He never said to me that he didn’t believe them… He said what matters is that people believe in them,” said Parry. “It doesn’t really matter whether you believe in ghosts. What’s real is the suffering and the pain.”

Parry theorizes that the widespread phenomenon of tsunami ghosts is likely the manifestation of a nation processing its collective trauma and grief. Coastal towns across Japan have indeed found other, creative ways to grieve. For instance, the town of Otsuchi installed a phone booth called “phone of the wild” atop a hill overlooking the ocean that allows those in mourning to send messages to their loved ones in another realm.

Dr. Charles R. Figley of the School of Social Work at Tulane University confirmed that trauma shared by the masses often produces strange, collective reactions. “It is not uncommon for fellow survivors of catastrophic loss and dislocation to have common reactions, be they paranormal sightings, sounds, or smells,” he said.

“Ghosts, for some, are more tolerable than the void created by death.”