Meet Lester Eubanks, The Child Murderer Who Escaped From Prison In 1973 And Remains Uncaught

While serving a life sentence for the murder of 14-year-old Mary Ellen Deener, Lester Eubanks was granted a trip to an Ohio mall — and vanished without a trace.

In 1973, convicted child murderer Lester Eubanks escaped from prison. Incarcerated for life without parole in 1966, Eubanks had been a model inmate for about seven years, so Ohio State Penitentiary granted him a furlough to go Christmas shopping at a local mall that December. 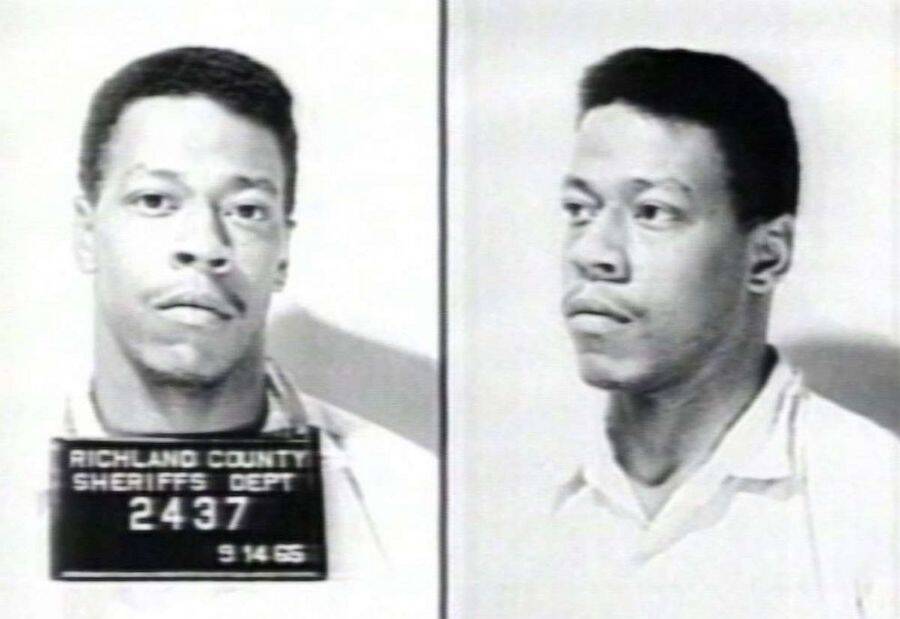 But a busy holiday-season mall provided Eubanks with a perfect escape scenario. He was asked to meet back at a specific time and place near the mall when he was finished. Instead, he vanished — and hasn’t been seen in nearly half a century.

Lester Eubanks was imprisoned in the first place for trying to rape a 14-year-old girl before shooting her to death — and then bludgeoning her into a pulp with a brick. His disappearance has plagued both authorities and the victim’s family for decades.

How a convicted killer so easily escaped prison and where he might be today has since become fodder for Unsolved Mysteries. The Netflix series’ second season aims to probe every detail of the case — which has only gained more steam the longer Lester Eubanks has been on the run.

The Murder Of Mary Ellen Deener 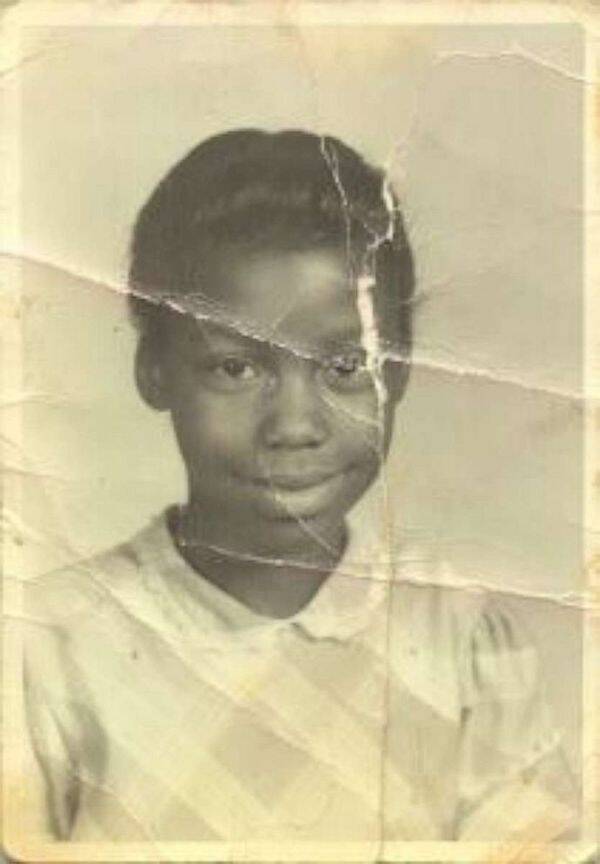 HandoutMary Ellen Deener was shot and bludgeoned to death when she was 14 by Lester Eubanks.

By the time Lester Eubanks murdered Mary Ellen Deener, a 14-year-old Mansfield, Ohio girl, he had already committed a series of sexual offenses. But the attack on Deener on Nov. 14, 1965 is the one that landed him in prison.

On that day, Mary Ellen Deener and her younger sister, 12-year-old Brenda Sue, were doing laundry. Out of change, Deener walked to another Laundromat for nickels and dimes. Tragically, she found Eubanks, instead.

She put up a courageous fight and thwarted his forcible sexual assault, but only angered Eubanks into bloodlust in the process. He shot her twice then beat her with a brick.

When she was found, Deener’s family was naturally consumed with unbearable pain. The girl had only tried to help her family out with chores and ended up dead in the streets — with change still in her hand. As if her murder couldn’t be any sadder, Deener had dreamt of becoming a nun.

Eubanks confessed to the murder the following day after local authorities placed him under arrest. After being charged with first-degree murder while perpetrating rape, he tried to plead insanity, to no avail. On May 25, 1966, a jury found him guilty — and sentenced him to death.

In arguably the first time Lester Eubanks would escape justice, his sentence was commuted to life in prison without parole when a U.S. Supreme Court’s ruling in 1972 found the death penalty unconstitutional. And the next year, he escaped. 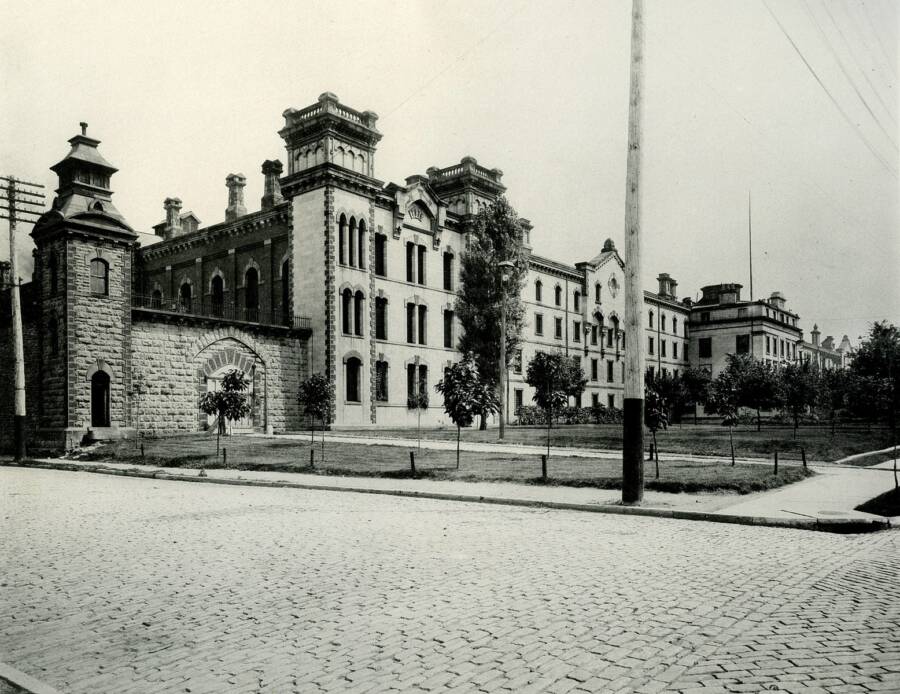 For the seven years Lester Eubanks was in jail, he acted like a model prisoner. The inmate was even profiled while still on Death Row in 1972 by The Columbus Dispatch in an article on incarcerated artists.

The publication deemed him “the best of the Death Row” painters and photographed him next to his Angela Davis tryptic. The three images showed Davis in glasses, her iconic afro, and a resolute stare. Perhaps it was the distinct change in personalities Eubanks related to so much.

“I have admiration and respect for her,” he told reporters.

Eubanks was so well-mannered and docile that he became an Honor Inmate at the facility, which earned him certain privileges. The program was borne from hopes that time outside the prison walls would help reform felons like him — and was heavily curtailed after three convicts including Eubanks escaped.

After being escorted to the Great Southern Shopping Center on Dec. 7, 1973, the man who murdered Mary Ellen Deener vanished. He never showed up to the designated pickup spot and remains elusive to this day. For Deener’s family, that day in December nearly paralleled the night of 1965.

“To use as powerful a word as I can think of, we were traumatized,” said sister Myrtle Carter who was 18 at the time of the murder. “We thought it was over. And then lo and behold, he goes Christmas shopping, first of all — that’s a shock — and then escapes. My mom, she was just beside herself.”

An interview with David Siler, who has been working the case since 2016.

“I don’t want you to think this has consumed my life, because it didn’t,” said Myrtle Carter. “I’m a Christian and I trust God and I allow him to do what he’s going to do in my life…It doesn’t consume me, but it bothers me that he’s still missing, that he’s still free and took her innocent life. That bothers me.”

While the Ohio Department of Corrections immediately listed Eubanks as a fugitive, it would take decades for federal authorities to do the same. It was clear to Deputy U.S. Marshal David Siler, who began working the case in 2016, that Eubanks had planned his escape from justice all along.

“He had to start this process two or three years prior,” said Siler. “Manipulating those guards, manipulating the system, being that good guy that he portrayed himself to be. It just got him outside the gates, and that’s all he was working toward.”

Then, in the early 1990s, the investigation began to pick up when a young officer directed the public eye to the case.

How Eubanks Has Been Hiding In Plain Sight For Decades 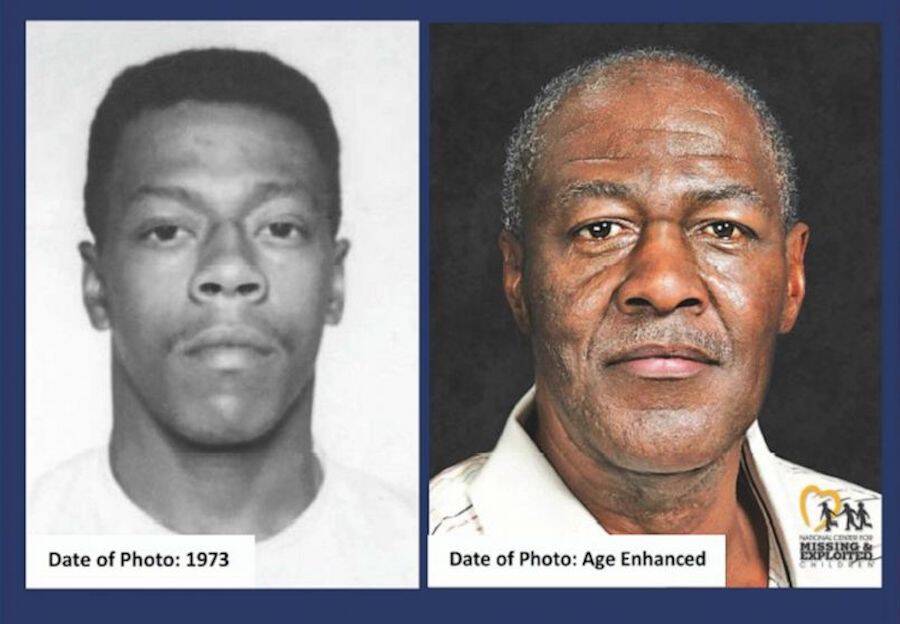 Law enforcement officer John Arcudi was in high school when Deener was killed. As head of the Detective Bureau of the Mansfield Police Department, he started digging into Eubanks’ disappearance in the early 1990s. He was shocked to find the National Crime Information Center hadn’t listed him as wanted.

That meant Eubanks could’ve been caught speeding or engaged in any other minor infraction — and the officer who took his prints or ran his license wouldn’t have known he was a wanted fugitive. 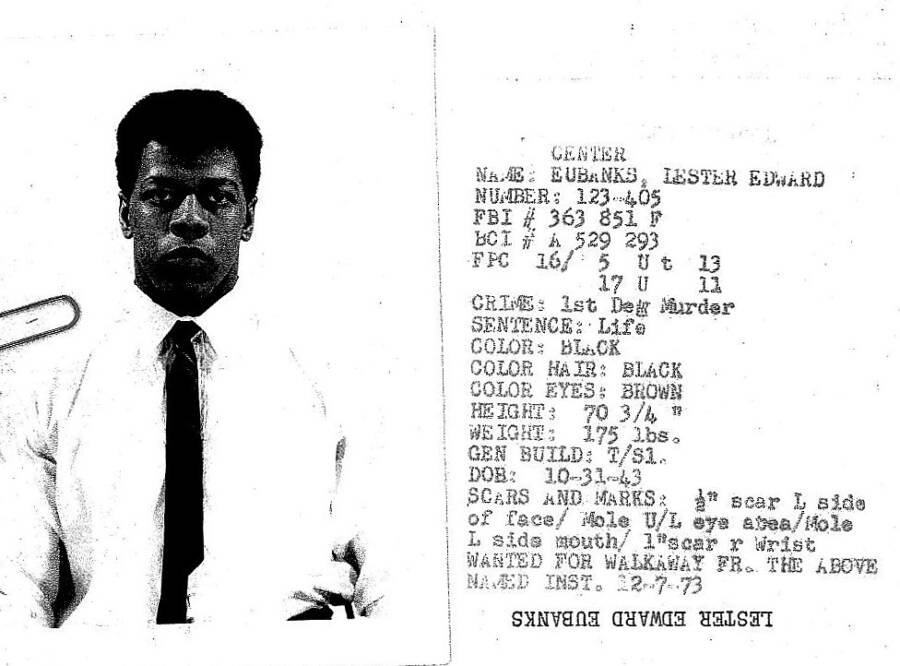 U.S. MarshalsIt took decades for the U.S. Marshals to place Lester Eubanks on their 15 Most Wanted list.

“It had been 20 years and it was like nobody was working the case that we were aware of,” said Arcudi. “He was just out there on his own and nobody seemed concerned about it.”

Investigators suspect that Lester Eubanks may be using the alias Victor Young. With no help on the cold case from fellow authorities, Arcudi contacted America’s Most Wanted.

“[All we need is] that one tipster, that one person that can bring in the last piece of the puzzle, even if they knew him a year ago, two years ago,” said Siler. “That’s what we’re looking for. Someone who’s like, ‘I know that guy.'”

The 1994 TV episode certainly helped, as hundreds of calls come in — with promising leads pointing to Northern California.

Where Is Lester Eubanks Today?

Arcudi notified the LAPD of his search for Lester Eubanks and found a cooperative detective in Tim Conner. The duo teamed up to check out a mattress factory in Gardena, California where an anonymous source said Eubanks worked.

A News 5 Cleveland segment on the reinvigorated quest for Lester Eubanks.

“I don’t think he ever took employment that ever did any background check. He was a guy who didn’t lay his head in any one place for very long.”

Though the media stunt helped raise awareness, and U.S. Marshal’s officially listed Eubanks on their 15 Most Wanted List, it was obvious that Lester Eubanks had heard of these developments, too. The promising Gardena lead ended with news that their suspect had quit his job and vanished.

“I think we were probably fairly close to Lester at some point, but the tips and the technology just didn’t make it where we could get close enough,” said Conner. “He’s very cunning; he’s not a dumb guy. He’s been avoiding the authorities for forty plus years.”

Siler believes that Eubanks is most likely being unwittingly protected by people who don’t even know who he is. He’s certain Lester Eubanks has likely fathered children by this point and is potentially a grandfather, as well. For Siler, tragedy and pain mark the Lester Eubanks case from all angles.

“The sad thing is, those who he has won over are victims, too,” said Siler. “They have no idea. So when we come knocking on the door and apprehend that person, their families become victims. And that’s sad.”

Investigators say Lester Eubanks was an avid martial arts enthusiast who loved music and art. He’s easily recognizable as he has a huge scar on his right arm.

The disappearance of Lester Eubanks most recently garnered renewed attention with the second season of Netflix series Unsolved Mysteries. While not an unsolved murder case, the culprit’s disappearance remains baffling. The show aims to understand how anything like it could’ve happened.

For Conner, two things are clear:

“I’ve thought about him over the years. I think he’s probably still alive. I think there’s people who know who he is and what he did. They’re just not giving him up.”

Fortunately, neither are the authorities. As the 50th anniversary of Lester Eubanks’ escape approaches, investigators are more determined than ever. Furthermore, it appears DNA evidence collected from his biological son could yield enormous leaps previously unavailable in catching him.

“The U.S. Marshals are not deterred by the passage of time when it comes to cases like this one,” said U.S. Marshal Peter Elliott of the Northern District of Ohio. “We are fueled by one thing, and that is justice for 14-year-old Mary Ellen Deener of Mansfield, Ohio, the innocent victim in this case.”

After reading about Lester Eubanks, learn about Wayne Williams and the Atlanta Child Murders. Then, read about the six chilling cases involving serial murderers who have never been caught.